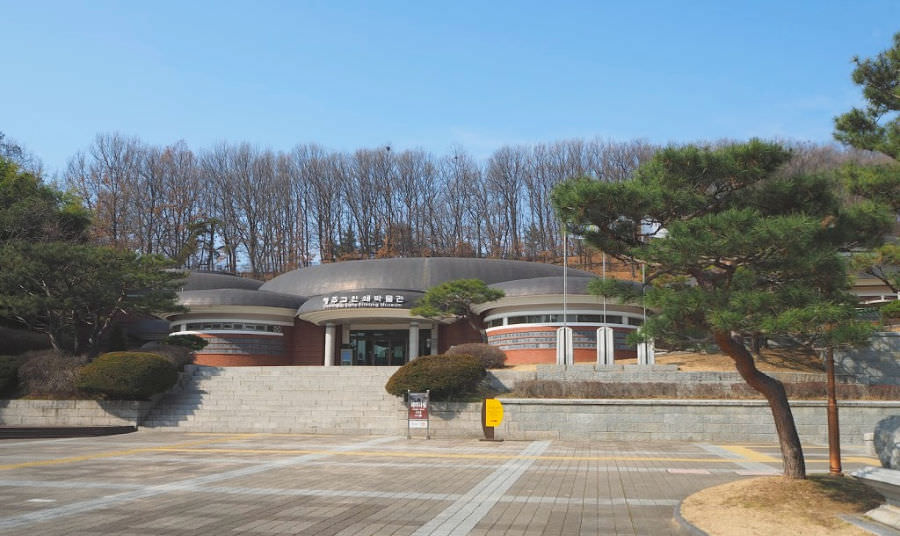 Jikji is an ancient printing technology invented by Buddhists centuries ago. The machine is believed to be the first in the world. Records and other relics are being housed at Cheongju Early Printing Museum.

The Museum is the only one in Korea that specializes in early printing in Korea. Jikji is a movable metal type and the oldest one extant in the world.

However, you cannot find that particular in the Museum... It is in France. There must be a specific reason behind that situation and will tell you somewhere in this article.

When I was planning to explore Cheongju City's attractions, I promised myself not to miss this place. In fact, I put it on top of my Cheongju travel lists!

QUOTATION: A first Jikji was published as one book with two volumes. However, it was divided into two books for preservation and now only Volume 2 of the book is being shared today. The book cover was created in Joseon era. It was brought to France by the first French diplomatic minister, Collin de Plancy, who recorded the oldest book printed in 1377. The first page of it was lost which makes a total of 38 pages that can be viewed.

Now, having been to this unique Museum, let me tell you points I found worth noting if you think of visiting the place. Here are what I think...

Indeed, there are more exciting things you can find inside the Museum and outside it. Across the road, you can find a huge Buddhist bell, an old Christian church, and Cheongju's arts center.

By the way, you can also go hiking around this historical area and enjoy the verdant surroundings and Cheongju City's bucolic atmosphere in this area.

Alright, let me tell you a bit of Jikji's background to make you get excited. Of course, you will find more photos below. 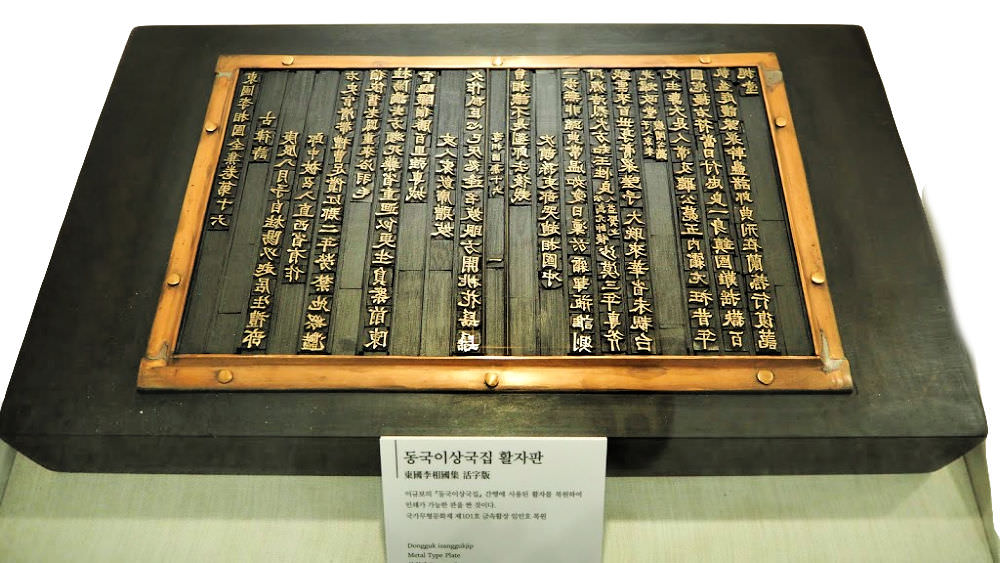 Jikji Cheongju Early Printing Museum, the name given to this Museum, was established right beside the Heungdeoksaji Temple site was invented. The temple site was designated as Historic Site No. 315 by the Korean government.

Jikji is thought to be the oldest movable metal type that we know in the world. The processes of making the type are on exhibition at this Museum. 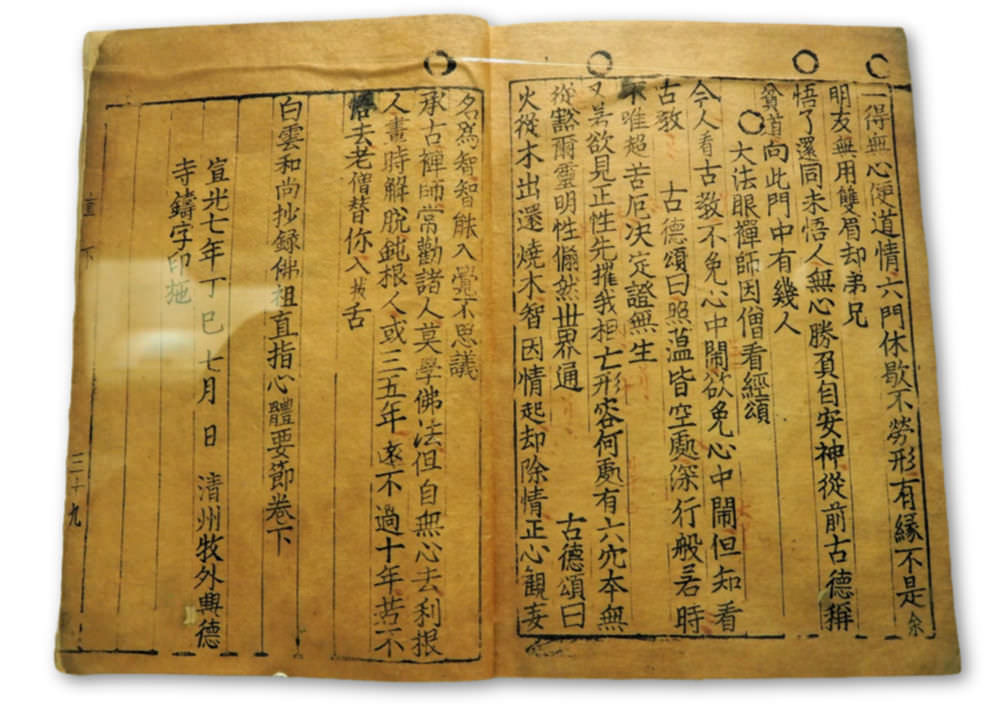 A page copy of Volume 2 of Jikji

Heungdeoksa Temple area, where the movable type was first invented, is under the maintenance of Cheongju Municipal Government since March 1992. That same year, the local government decided to build the present Museum.

As aforementioned, Jikji is the short form for the Buddhist Zen teachings called Anthology of Great Buddhist Priests' Zen Teachings.

The originator, Baegun, compiled significant teachings of Buddhism that embodies the essence of the minds of Buddhist patriarchs and Zen masters.

The Anthology of the Great Buddhist Priests' Zen Teachings, or Jikji, was produced as printed material using movable metal type. Jikji is more than 70 years older than Gutenberg's 42-line Bible that was first published in Germany.

It is believed that there were two Volumes (Volumes One & Two) of Jikji. However, only Volume Two exists, which is at the National Library of France, while the other is nowhere to be found.

What you can find at Jikji Cheongju Early Printing Museum are copies, photos, methods, and processes in making not only the metal types but also the woodblocks and other materials used before the metal types came into being.

Since temples really fascinate me due to some reasons, I made sure that I won't spend too long in the Museum. I thought that I should explore the temple site where Jikji was created.

I felt that there must be something in this special place that created the first metal type printed Buddhist teaching book. I expected that I would not see much as most temples in Korea were (or are) mostly made of wood (except the stone foundations).

In comparison to other world heritage sites and structures that were mostly built with solid rocks (e.g., Greek temples, etc.) Korean temples needed to be rebuilt or renovated overtime.

So, what I am saying is that I expected to see a beautiful temple with some relics and artifacts lying around it on its ground. Indeed, I saw what I expected while at the same time, feeling happy with my experience.

For sure, this site is the original site of Heungdeoksa Temple, as confirmed by Korean authorities and excavators (archaeologists and historians). One thing that I think proved this is the place is the stone foundations I found lying by the edges of the temple area's lawn (photos). 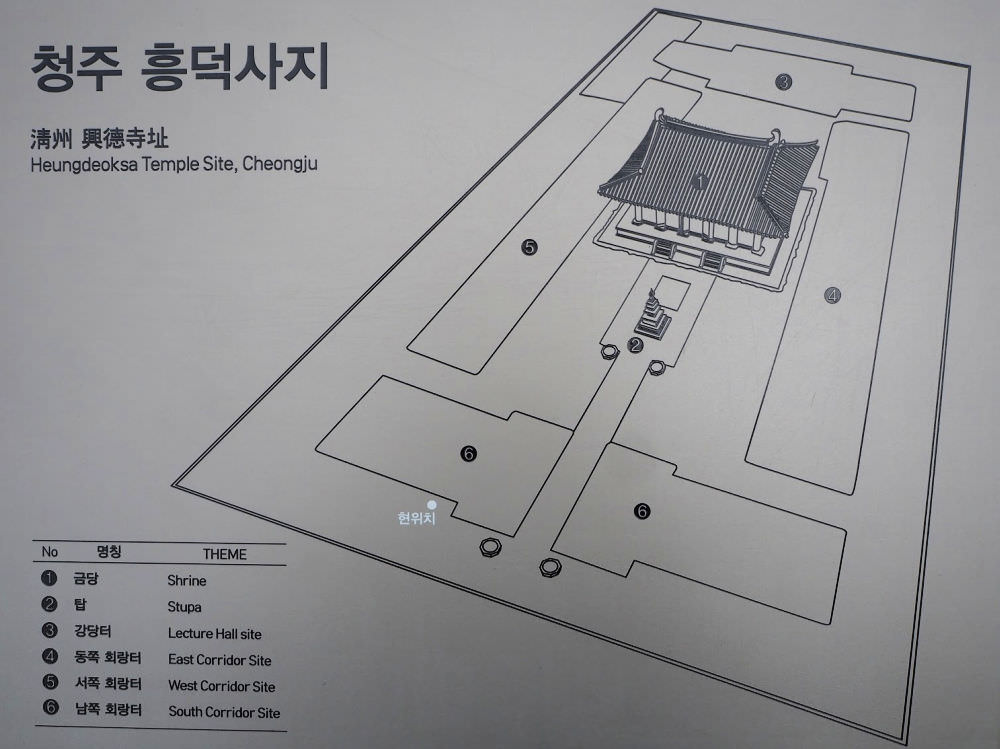 Heungdeoksa Temple Site sketch based on the excavated artifacts 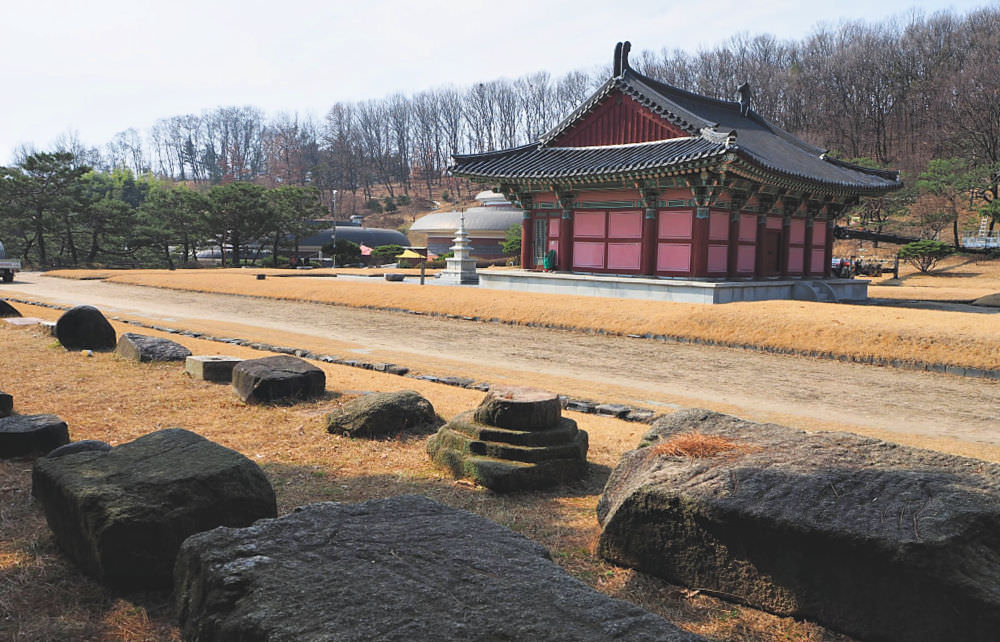 Heungdeoksa Temple and its original foundation stones lying outside the lawn 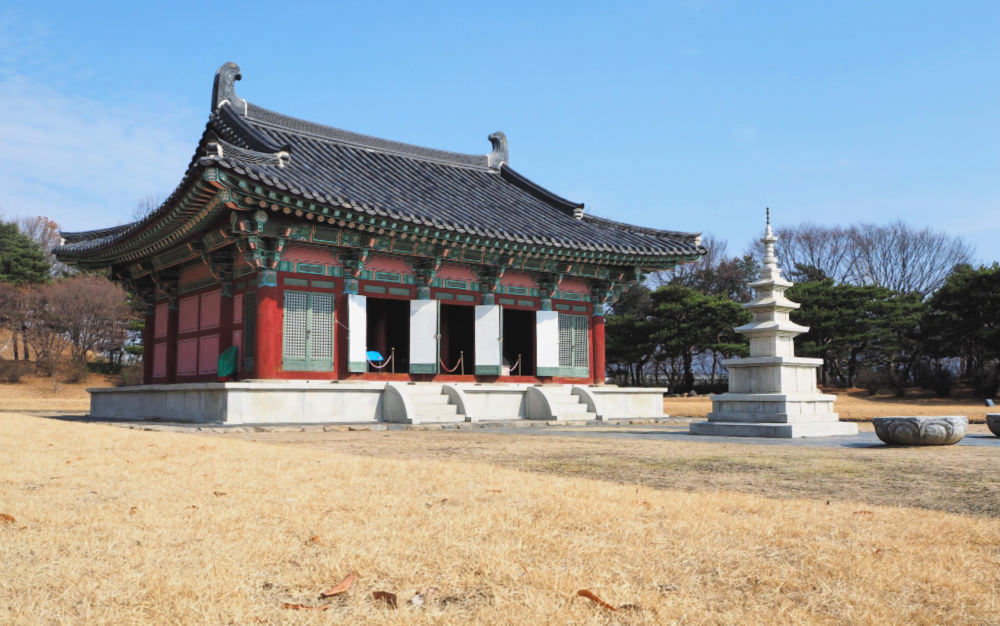 A rebuilt Heungdeoksa Temple on its original site as excavated in 1985.

What I mean is that Heungdeoksa is supposed to be much larger and popular compared to other temple areas in South Korea (e.g., Bomeosa, Jogyesa, etc.), given that it has produced the one and only Jikji.

I guess, as of this writing, the temple area has suffered past wars and invasions and was not able to recover from its destruction. Those historical misfortunes should be the cause of Volume One's disappearance.

Okay, let me continue with some exciting details...

The researchers of the Cheongju University Museum implemented excavation activities in Heungdeoksa Temple Site in 1985. They unearthed a number of artifacts belonging to the temple itself. The artifacts have written records that mention that name, dates, and other relevant information connecting the temple and the artifacts founds.

Below are the artifacts excavated... 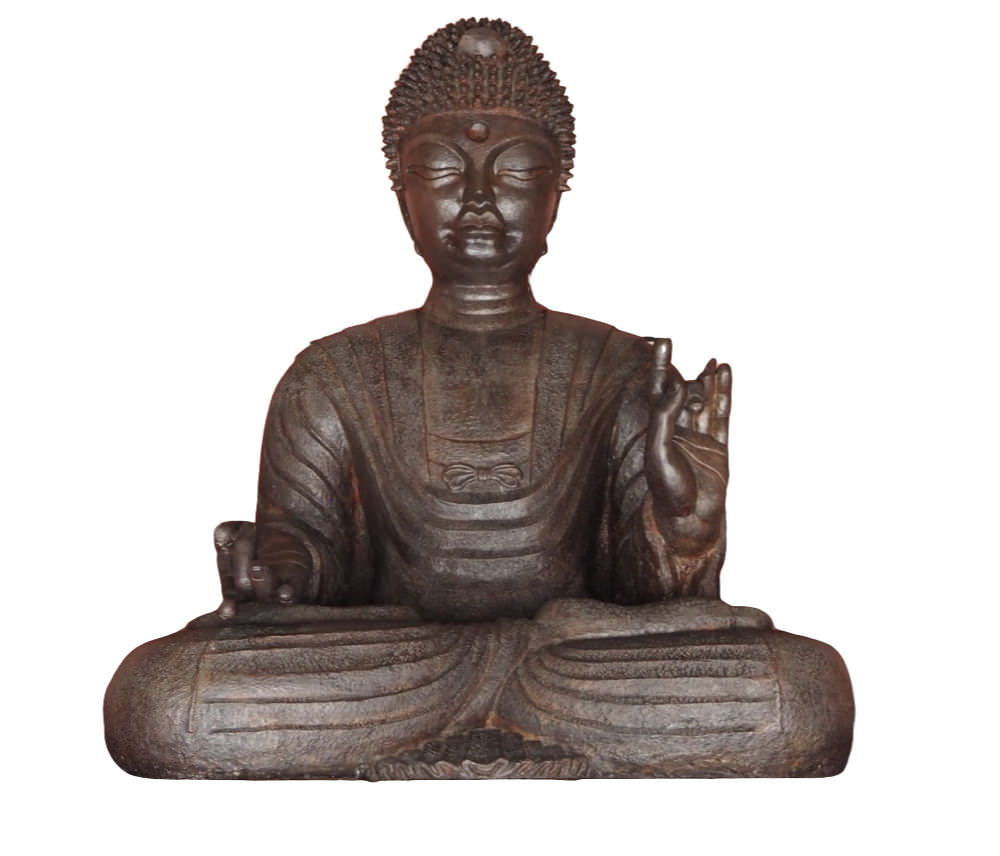 Those are the artifacts found during the excavation period. But I believe that there is more to them. Only that they might have been stolen, destroyed to pieces, moved somewhere in Korea, while some probably can be found in some museums in other countries or at some private collections.

I know you agree with my opinion because it is true, right? You can see hundreds if not, thousands of relics or artifacts from a country that are found in other countries. I have seen such cases. Of course, for some various valid (or invalid) reasons!

Jikji was finally enlisted on September 4, 2001, on the Memory of the World List. It was first recommended for enlistment during the 5th meeting of the International Advisory Committee for the UNESCO Memory of the World that was held in Cheongju City in June 2001.

In April 2004, the UNESCO Jikji Memory of the World Award was born. This move was to commemorate the inscription of Jikji for being a unique part of the List as the oldest movable metal type known in the world.

The Award seeks to reward research that promotes and enhances interest by selecting an individual or group that contributes to maintaining the List. The Award is being held bi-annually.

The recipients of the Awards since its establishment are...

You can see lots of materials related to Jikji and other documents you will find interesting to know and use. The facility is easy to navigate and quite relaxing.

The Museum is the Modern and Contemporary Printing Exhibition Hall. Here are the access times and periods...

This exhibition hall is separate from the Jikji Museum. But it is located just across the road.

The Hall boasts as "the mecca of printing culture cities," which exhibits modern and contemporary printing machines.

Together with the Early Printing Museum's training center, Modern and Contemporary Exhibition Hall also showcases the development background as well as the future technology of printing in Korea.

Printing Experience
The Hall offers experience and learning programs on...

The experience programs are offered for FREE. But you have to pay for the mug and photo frames if you do it. 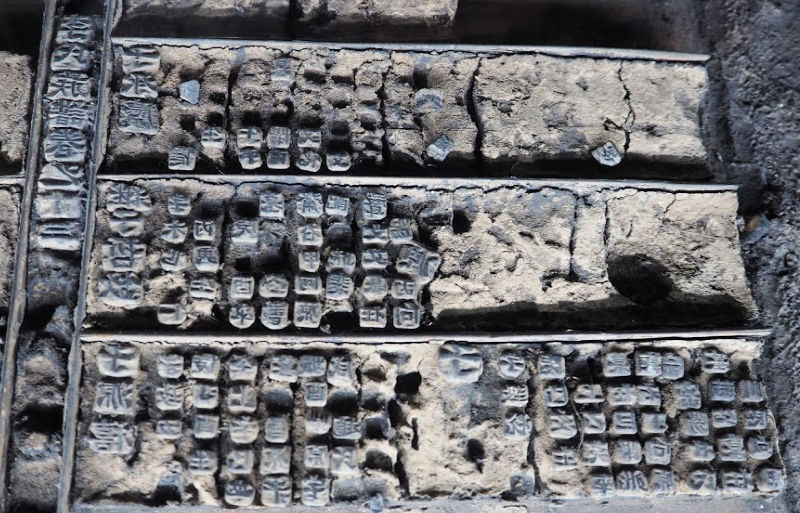 Metal Type Training Center
The local authorities and promoter of metal type printing machine established a metal type training center for anyone interested to experience and learn how it is done.

Aside from the free demonstration, there are other paid programs, including Old Book Making, Book Art, and Bamboo Strip Making. 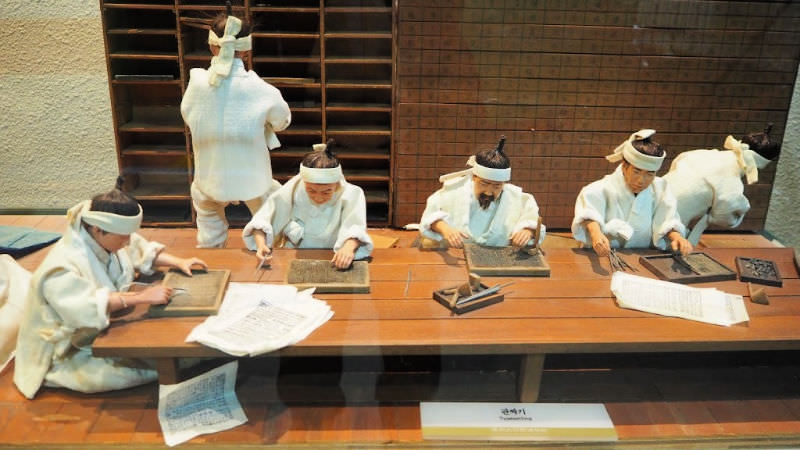 Workers involved in the process of producing Jikji

My Recommendations
The wonder of having this remarkable invention created in Cheongju is worth exploring. And you don't just come from a long way then leave that same day. Urgh! Explore Cheongju's attractions more!

So, let me suggest that you stay in some friendly and famous places. Either in the city or on the outskirts. If in the city, see the accommodations here and discount offers. I have been using this company, and I'm always satisfied with the hotels they partner with.

From anywhere in the country, you can take inexpensive public transport to Cheongju City in Chungcheongbuk-do Province. When in the City, you can take a taxi, bus, or drive your private or rented car using the following destination guide.

By Car
Take the Jungbu Expressway (Seochongju IC), then turn left for Bongmyeong Intersection, the find the Museum on your left.

By Bus
Take a bus from Express (inter-city) Bus from Cheongju City number 831, then get off at Cheongju Art Center Bus Stop. It takes around 20 minutes or so from the terminal to the Museum area.

Cheongju City's express bus and intercity bus terminals are very accessible. You can get there from any point of origins such as in Seoul, Busan, Incheon, and other terminals.

If you want to see more of Cheongju City, please continue scanning this site. Or, let me know if you need recommendations of places worth exploring in Cheongju and within Chungcheongbuk-do Province.

I hope you have safe travels. See you again!