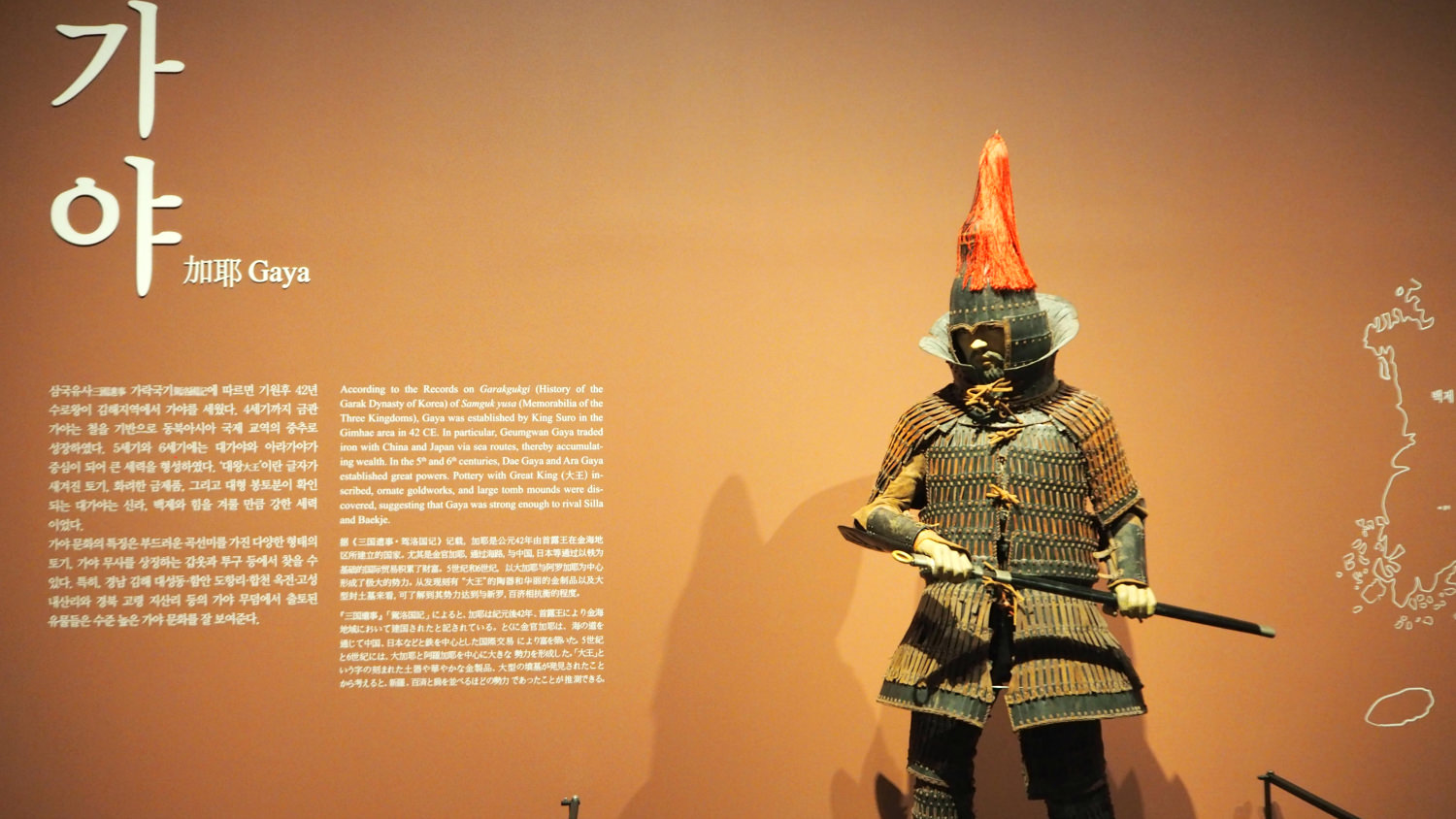 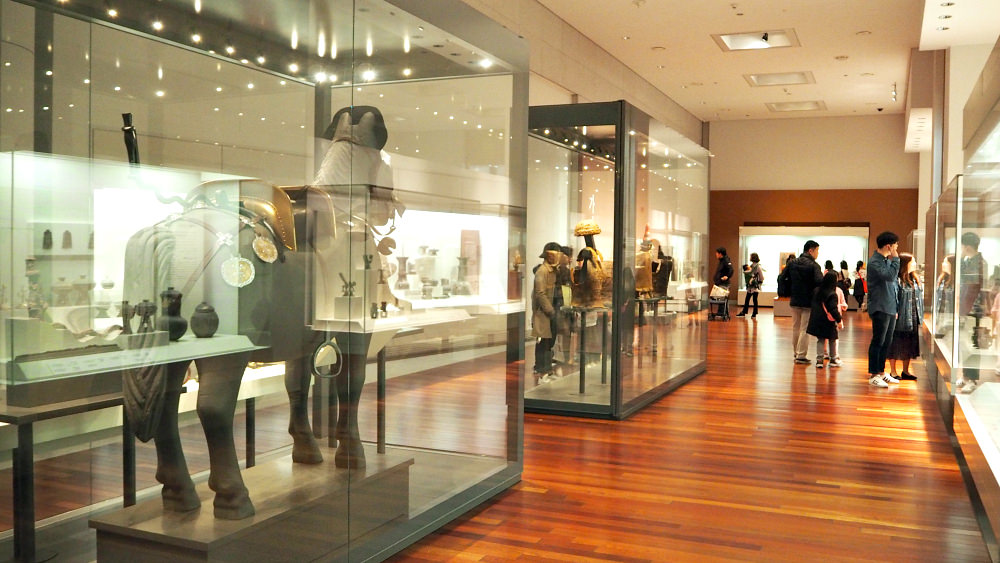 NOTE: This brief article about Gaya Kingdom is one of the series article I am writing about my visit to the National Museum of Korea located in Seoul. Shortened as NMK, the Museum is bountifully exhibited with priceless and beautiful artifacts and memorabilia of all sorts.

According to the Records of Garakgukgi (History of the Garak Dynasty of Korea) in the Samguk yusa (Memorabilia of the Three Kingdoms), two founding mythologies about Geumgwan Gaya and Dae Gaya have been handed down.

According to the Geumgwan Gaya founding mythology, from the heaven, a golden box containing six golden eggs came down to Gujibong Peak, and the people sang and welcomed it.

Ten days later, out of the eggs were born six babies; the firstborn was Suro, who became the king of Geumgwan Gaya. The other five became kings of the five Gayas.

Potteries of Geumgwangaya (Gimhae area) in the latter half of the 3rd century include brazier-shaped pottery stands with wavy line patterns inscribed, mounted dishes with the mouth bent outward, and jars with two ears. 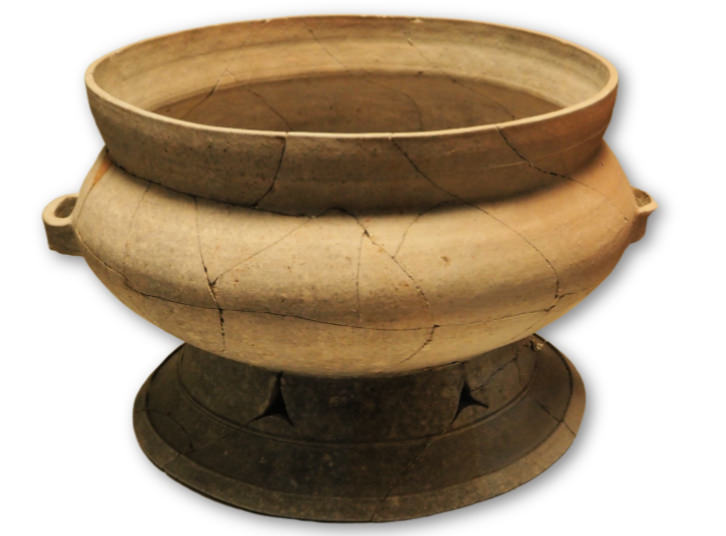 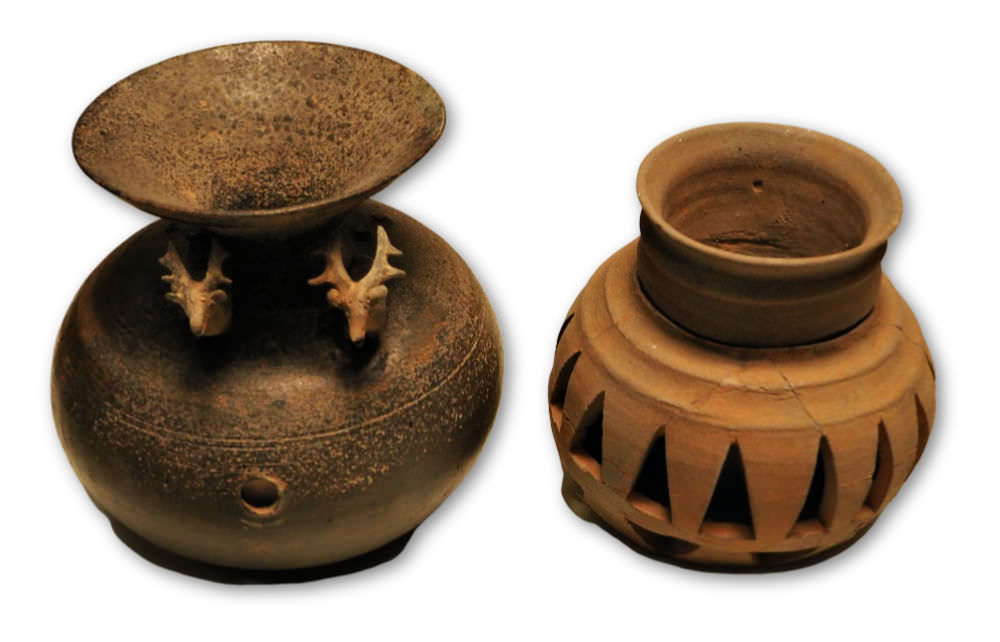 Burner and a pot adorned with animals heads (maybe deer)

Gaya Pottery in the Regions

Short mounted dishes with small square openings, short-necked jars with lid base, and cylindrical-shape pottery stands with its body adorned with long vertical bands were popular in Daegaya (Goryeong and Hapcheon areas).

Daegaya potteries were excavated in Namwon and Imsil areas beyond the Sobaek Mountain Range, suggesting that Gaya expanded its power broadly. 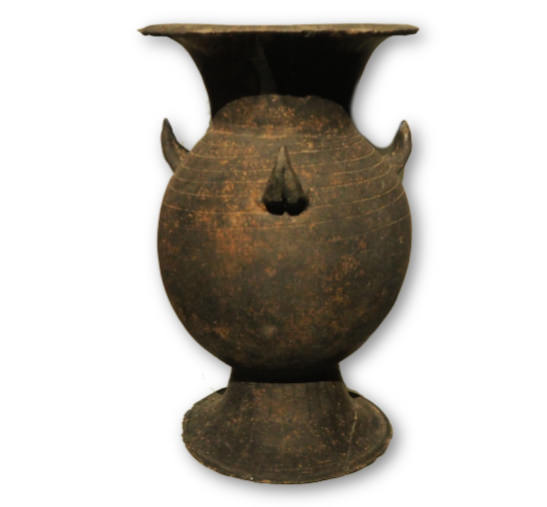 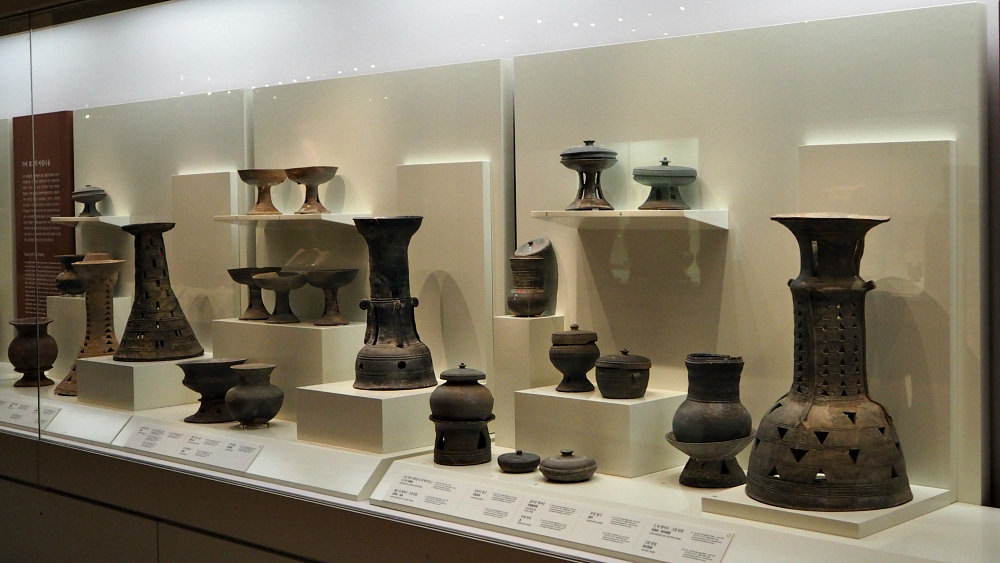 Also, discovered in Sogaya (Jinju and Goseong areas) were flat-body mounted dishes with long square openings in the stand and open-mouthed jars with horizontal mouth ends.

Aragaya potteries dating back to the 5th century include mounted dishes with flame-shaped openings, and cylindrical-shaped pottery stands adorned with bracken patterns.

Production of Iron and Ironware

Ironware is made from iron produced by melting iron ores and extracting iron.

Two methods are used for making ironware: casting wherein molten iron is poured into a mold, and forging, which involved heating and pounding lumps of iron.

Many iron weapons such as swords and spears were excavated from tombs; among them, swords with ring pommel and adorned with a dragon and a phoenix was presumed to be a symbol of boosting the unity between the ruler and political groups. 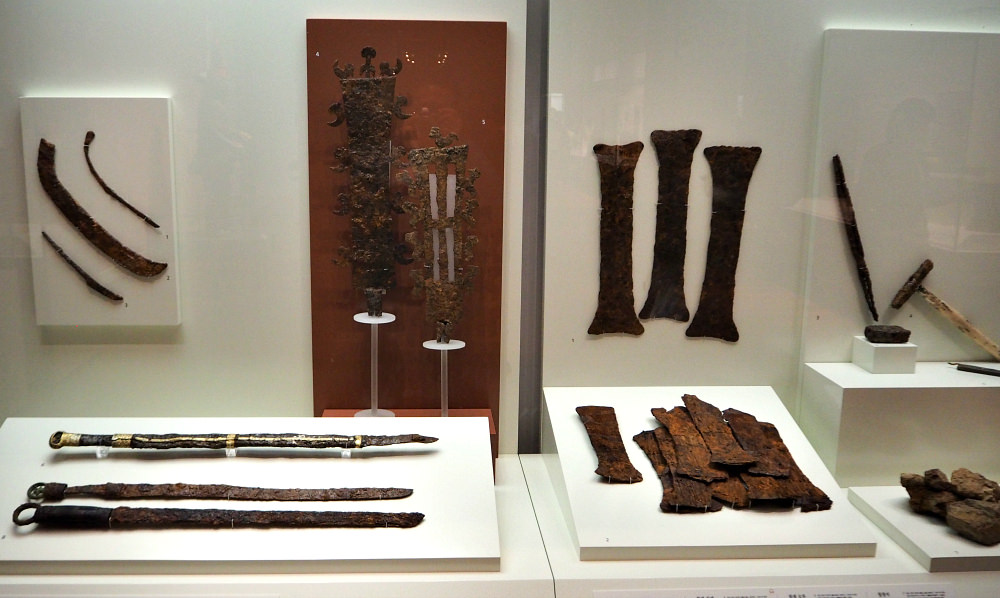 The rear and front bodies are separable or are connected by leather and hinges to make the armor easy to wear and take off. 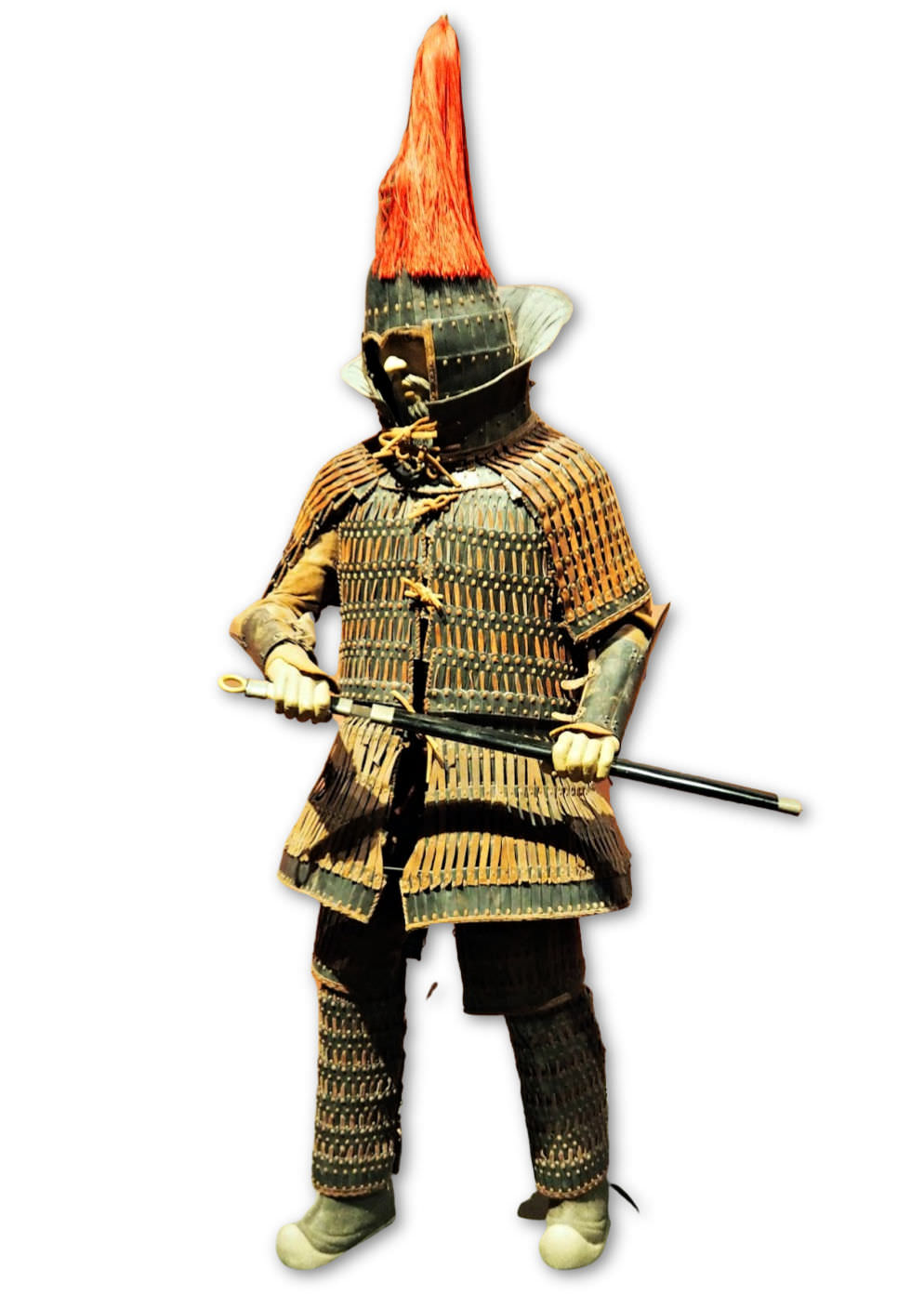 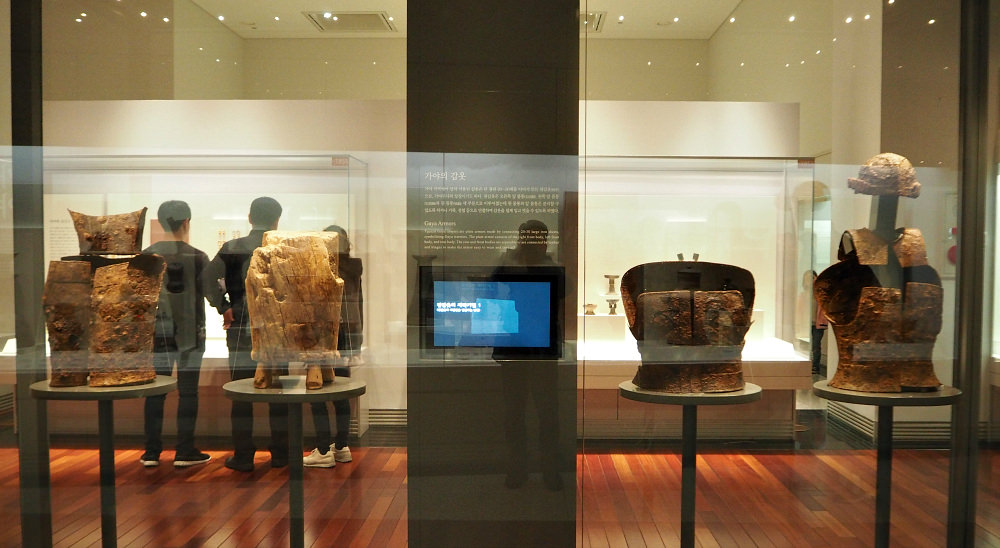 Gaya was situated adjacent to the sea; this geographical advantage and ample iron resources enable it to engage in trading with China, northern parts of the Korean Peninsula, Japan, and even the West.

Celadon jars with hen head-shaped mouth, which have recently been excavated in large numbers in the Baekje area, were also discovered in Gaya tombs in the Namwon area. 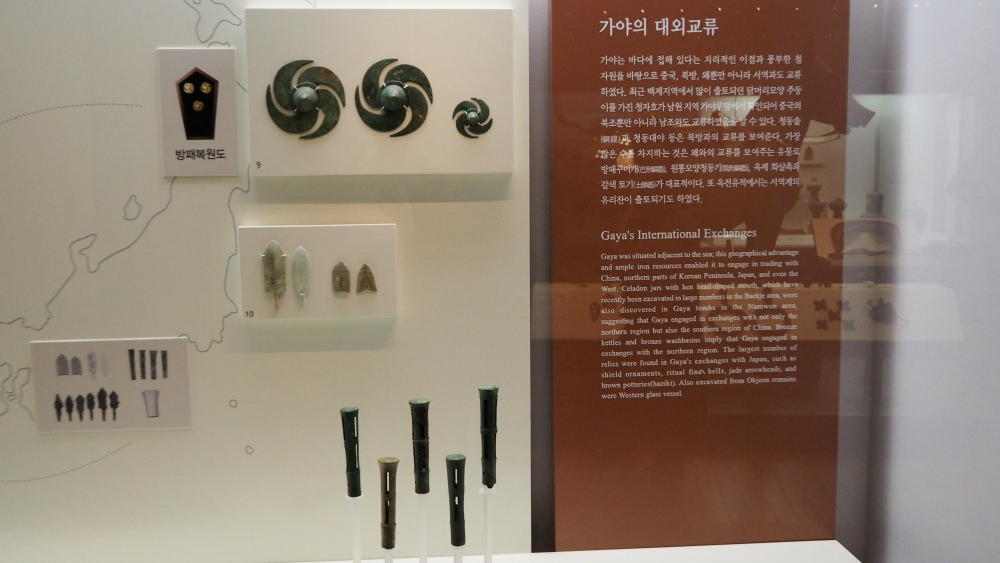 The most significant number of relics were unearthed in Gaya's exchanges with Japan, such as shield ornaments, ritual funeral bells, jade arrowheads, and brown potteries. Also excavated from Okjeon remains were Western glass vessels.

One can make out, in part, the Gaya Kingdom people's lifestyle through the articles and potteries discovered in tombs and domestic remains.

Gaya people are known to have eastern freshwater fishes, gastropods, shards, tuna, chicken, and other meats, as well as grains and fruits such as red bean, wheat, chestnut, peach, and walnut. 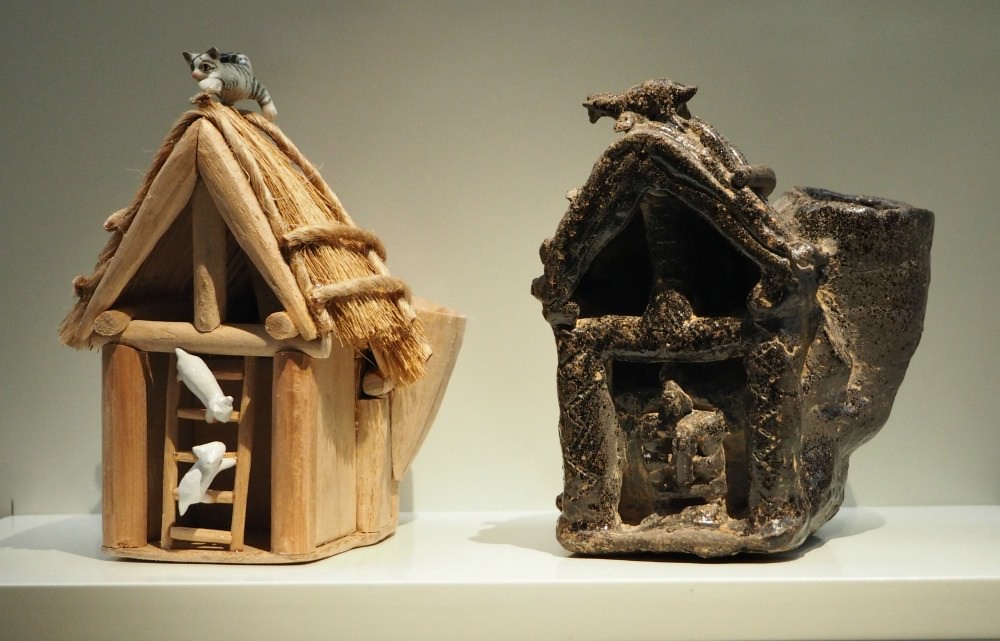 They also cooked food by steaming and boiling them. Steamers were often excavated from the Gaya housing sites.

From Gaya to Silla

Unlike Gemgwangaya or Daegaya, which secured their independent powers until the 6th century, Seongsangaya in Seongju area, Gyeongsangbuk-do, and Bisabeol in Changnyeong area, Gyeongsangnam-do were presumable place firmly under the influence of Silla early on.

Many of the gold works, harnesses, swords, and others, which were excavated from the major tombs in Songsan-dong (Seongju) and Gyo-dong (Changnyeong), are of the Silla Kingdom type, but the pottery culture is local. 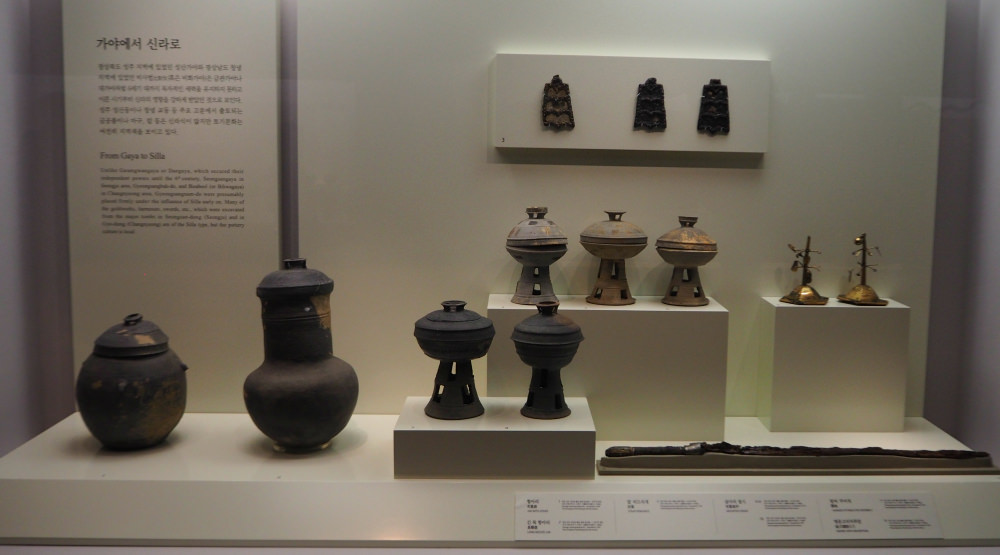 Figurative earthenware is potteries patterned after humans, animals, or objects. Some have an empty cavity inside or a horn cup, allowing them to serve as kettle or cup.

Moreover, there are many potteries shaped like a ship, a cart, a horse, a shoe, and a bell, showing part of the people's lifestyle at the time. Some potteries are adorned with animals such as deer, horse, and pig.

Gaya's figurative earthenware was mostly excavated from tombs, suggesting that they were used for funerals. They symbolize prayers and wishes for the salvation of the soul for the dead and comfort in the after-world.

Gaya people's favorite ornaments include crowns, earrings, necklaces, bracelets, and rings. Of them, crowns feature a round base and a flower-shaped upright adornment.

The top and bottom round base areas have dot-lined patterns and dot-lined lattice patterns engraved, generally having round spangles suspended.

Some earrings have one ring, but others have three divided parts. Necklaces are mostly made of glass, crystal, agate, amber, and amazonite; bracelets and rings are also excavated, albeit rarely. 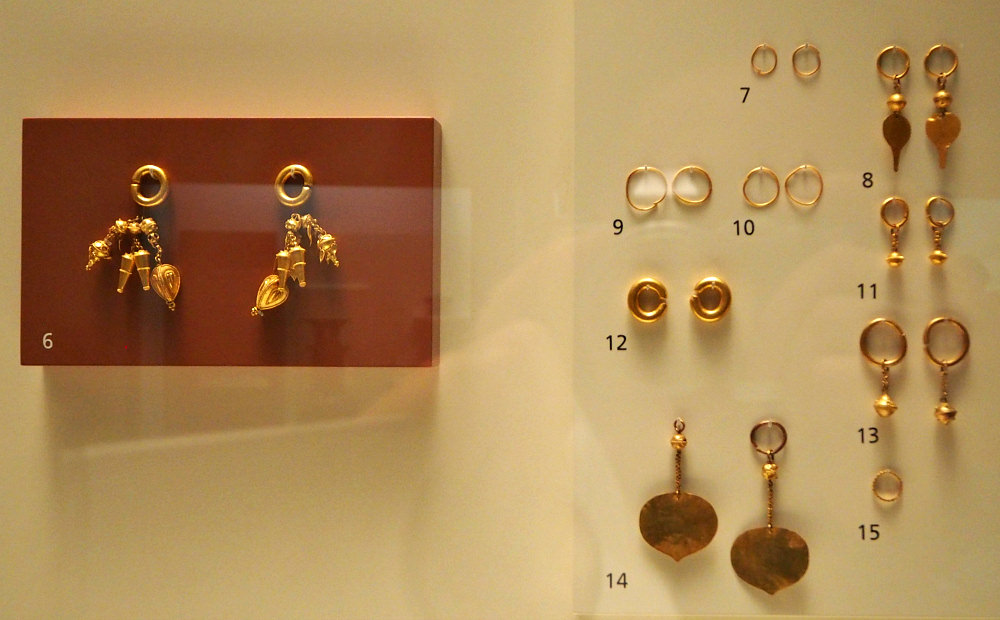 Ornaments are not only intended for beauty but also symbolize magical power and social prestige, giving a glimpse into ancient people's mental world.

You can see more about the Gaya Kingdom's artifacts at the National Museum of Korea in Seoul (NMK). Find more about this museum and the guide on how to get there.

Thanks for reading and stay safe!