15 Top Incheon Attractions
You Can Visit in Korea

Incheon City is a varied and expansive city with many districts ('gu' in Korean). It is on various topographical terrains such as mountains, estuaries, canals, industrial complexes, and islands.

You can easily travel via subways, buses, taxis, and trains from Incheon to other places in the country. In fact, you can find various and colorful Incheon attractions without going away from this city area.

Number of Foreign Visitors: Before COVID-19 pandemic, Incheon has an influx of over 17 million visitors (2019) and increasing. They include tourists and business people, according to Korea Tourism Organization (KTO).

From Incheon, you can depart to a constellation of 168 islands and other cities you plan to explore. You can visit temples, islands, parks, historical and natural museums.

Let's check out some of the places to see in Incheon... 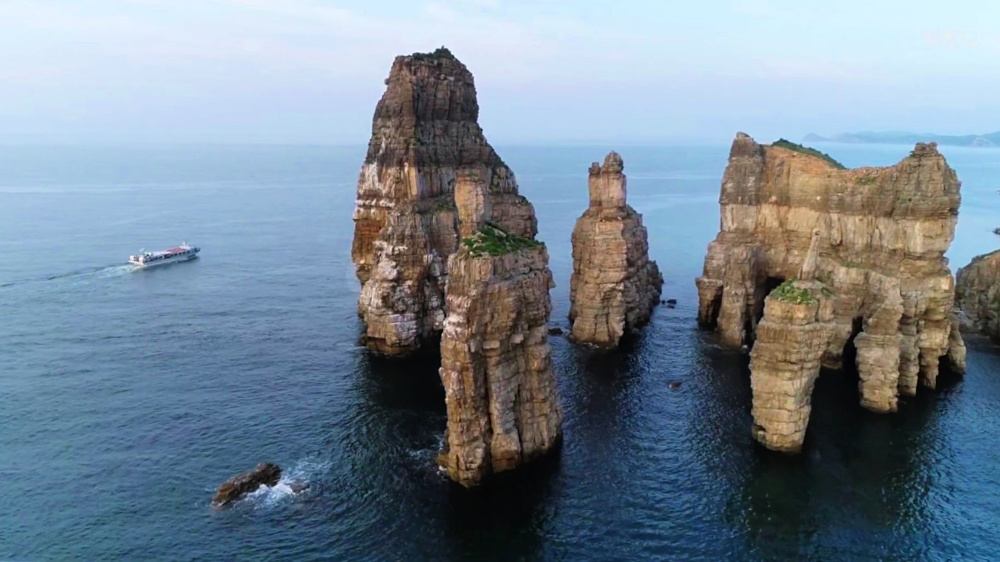 Baengyeongdo Island is a highly-coveted island among visitors from the mainland of South Korea. It is one of the five northwestern border islands and is near the disputed northern limit line.

It takes four hours to reach Baengnyeongdo by ferry. However, the ferries are always packed with travelers.

Chinatown in Incheon
The Incheon Chinatown is the only recognized and officially designated Chinatown in the country. It is located by the hillside, which has been around since 1884.

You can still observe the old Chinese style structures, including the main gate, steps, sculptures, Chinese restaurants, among others. Up to this day, Incheon Chinatown is being inhabited by second and third-generation Chinese running various businesses, including restaurants and gift shops.

There is still a considerable Chinese population in this town, numbering around 50 thousand. Of course, you can purchase various Chinese products, including... 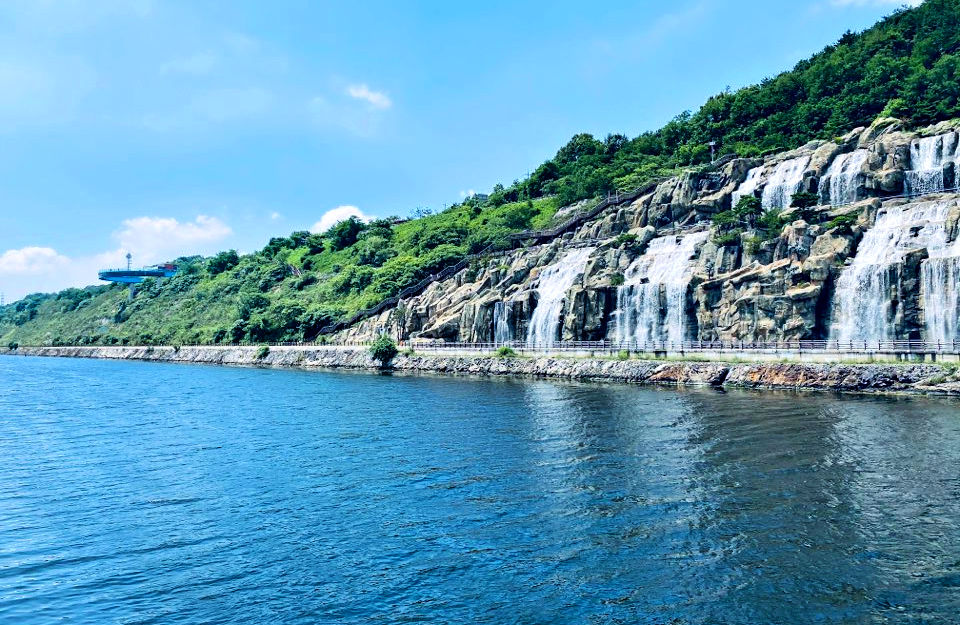 Gyeongin Waterway (아라벳길) or Ara Canal is one of my favorites as I love cycling by its cycling paths. It has a total of 41 kilometers. Gyeonging Waterway links the West Sea (Yellow Sea) with the Han River.

This waterway is an 18-kilometer canal for ships that traverse from Incheon's Seo-gu to Gangseo-gu in Seoul. Completed in 2012, Gyeongin Waterway is Korea's first inland waterway with some following exciting features... 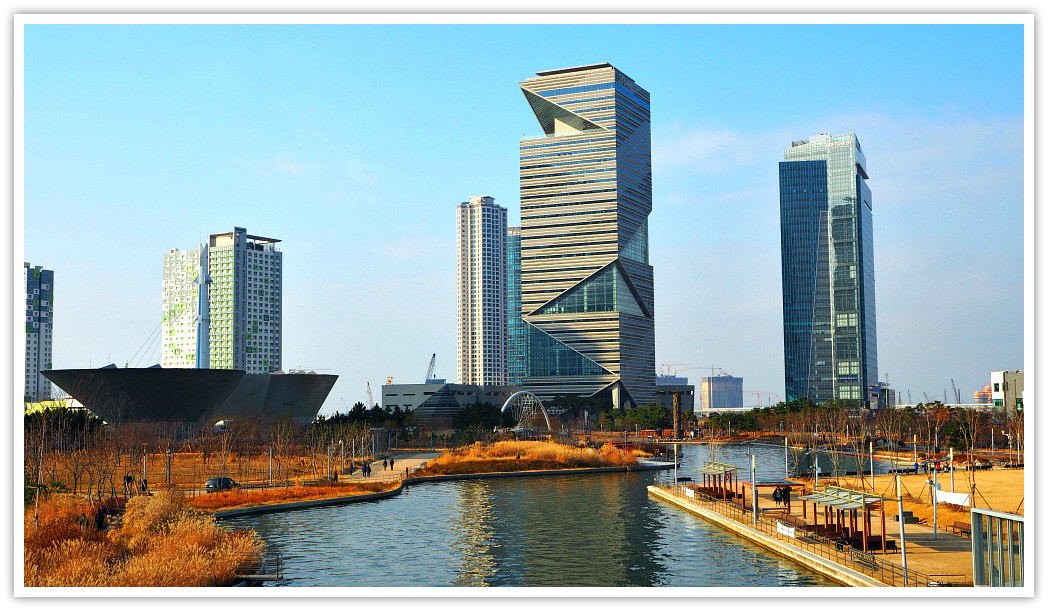 G-Tower is on Songdo Island, the newly-established district catering to new and international business in Incheon Area.

The G-Tower is where international organizations established their offices and secretariats, including the Green Climate Fund (the fund for supporting developing countries), UNDP, Global Green Growth, and more.

G-Tower overlooks the fantastic views of the waterway and futuristic and green buildings of Songdo District. The tower has a great exhibition of IFEZ and has an open atrium for observing Songdo's beautiful landscape and nightlights! 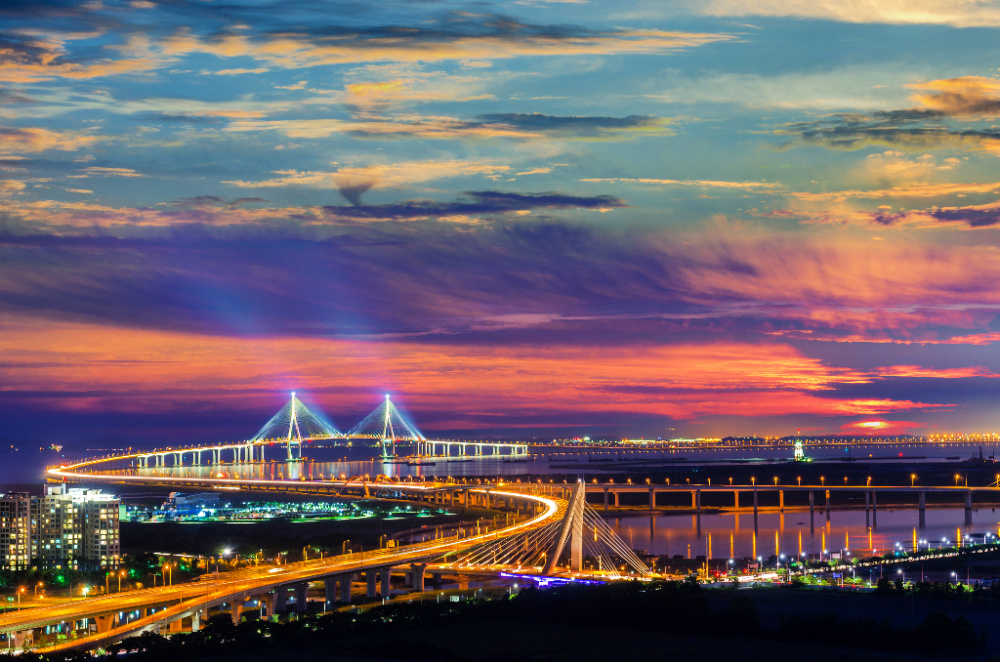 A sunset sight of Incheon Bridge

Incheon Bridge is the longest bridge in South Korea, extending over 21 kilometers from Incheon International Airport (Yeongjong Island) to Songdo Island. The bridge was completed in 2009 for a total of 2.45 trillion Korean Won.

The construction of Incheon Bridge is aimed at enabling economy and international business in the Incheon area. The travel time from Incheon Airport to Songdo is cut to an hour less via this bridge. Some exciting features of Incheon Bridge include... 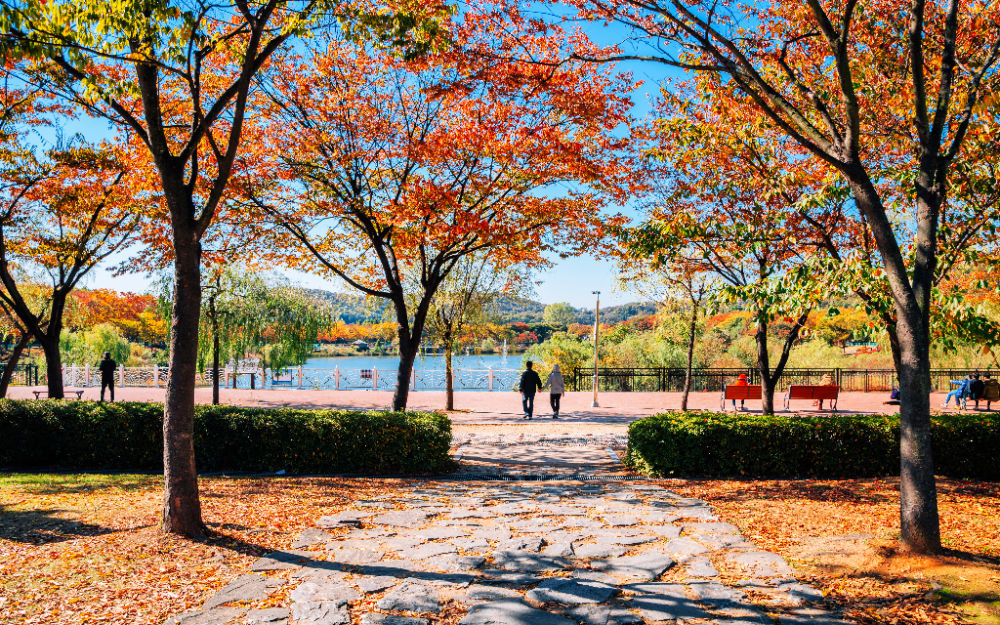 Incheon Grand Park is a space claiming 727 acres amidst two peaks. You will enjoy its ecological spaces, gardens of various plant species, and children's zoo.

The zoo cares for over 200 animals, including parrots, Japanese macaques, Pungsan dogs, sheep, goats, ostriches, monkeys, and other exciting animals for kids to see. Other exciting things and activities...

Jayu Park or Freedom Park is also one of the best places to see in Incheon. It is located on top of the mountain, where you have a fantastic view of the surrounding areas, including the Incheon Port.

The name 'Jayu' Park was given in 1957 to commemorate General MacArthur's presence through his statue. MacArthur came to the Incheon area landed with 75,000 troops and 261 vessels that helped defend the country against invaders.

Some notable features of Jayu Park or Freedom Park... 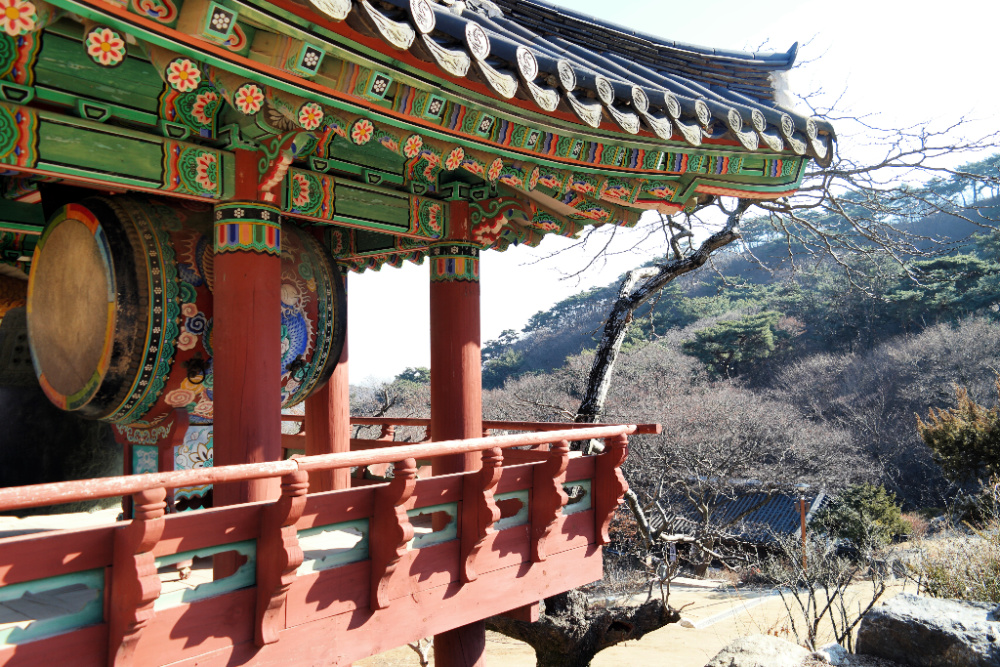 Jeondeungsa Temple is on Ganghwado (island), a famous Buddhist temple where believers and non-believers come to pray or pay respects.

Jeondeungsa Temple sits in an ancient forested area believed to be the oldest Buddhist temple in the country. Jeondeungsa was established in the 4th century during the jurisdiction of Sosurim of Goguryeo Kingdom.

One of its exciting stories is when some 50 Buddhist monks joined the victorious defense battle against the French fleet in 1866. Other exciting features of Jeondeungsa includes...

Memorial Hall For Incheon Landing Operation
This memorial hall commemorates the Battle of Incheon. The hall was opened in 1984 to celebrate the centenary of Incheon Port's opening to the world.

The memorial hall is covered with an 18-meter memorial tower that flies the flags of 16 countries representing the United Nations Command.

The hall exhibits the following features...

Sinpo International Mark has its beginnings at the end of the 19th century. Located near the north of the port in Jung-gu, the vendors began selling vegetables and other products to foreign visitors, including Westerners, Chinese, and the Japanese.

Its popularity was officially established as a market in the 1970s. It became Incheon's representative market that receives tourists coming via ferries and cruise ships. You will also enjoy... 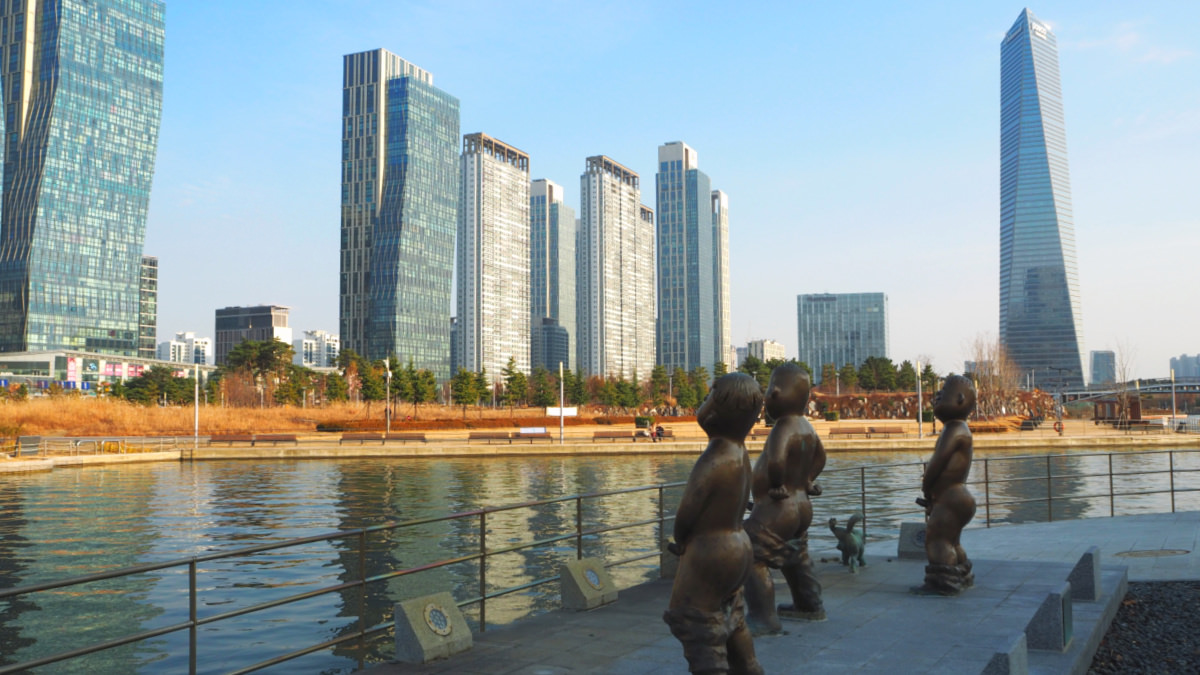 Most probably mimicking its name from the US' central park, Songdo Central Park is beautiful and relaxing public spacious for various recreations. It is a 100-acre parkland surrounded by impressive apartment skyscrapers.

You will enjoy the following:

Songwol-dong Fairy Tale Village is located near the Incheon Port area and close to Chinatown. This village is where the newly-arrival foreigners settled down in the late 19th century.

When the settlers left, and the population dwindled, the area became eerily quiet. The newer generation started to beautify the neighborhood with furnishings to revive the past's vibrant atmosphere, including intricate and colorful sculptures.

Now, you will find and enjoy...

Sudoguksan Museum of Housing and Living is where you can find records and photos of the area's past.

Located in the hilly Songhyun Park inDong-gu is a museum displaying the challenging history in the Incheon area. Sudoguksan Museum displays the 'daldongne' (Moon Village), where the government established a temporary settlement for the poor in the 1960s and 70s.

The moon village on the hillsides has a clear view of the night sky, and so the town was literally named. At the museum, you will see these exciting features... 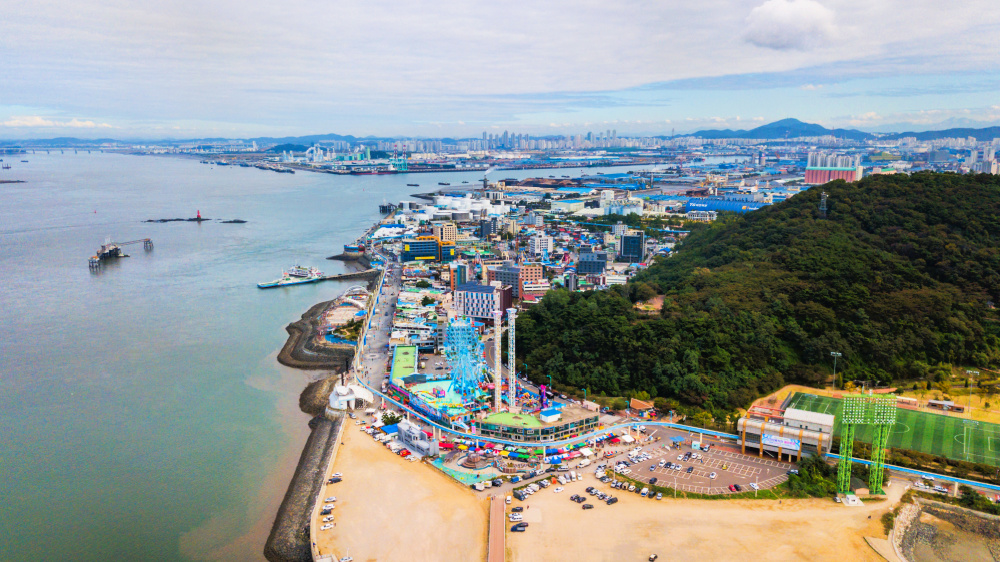 Wolmido (or Wolmi Island) is now linked to the mainland through land reclamation and a new highway, which turned the island into a contiguous part of Incheon.

A US Army base was established on WOlmido in the 1950s and ended its presence in the 1990s. Since then, Wolmido became an attraction and a weekend retreat among travelers from other cities.

Wolmido started attracting guests in 1989 when a cultural street (Wolmido Cultural Street) was established, and various cultural activities are being organized. Here are the things you can observe...

Yeonmijeong Pavilion, Ganghwado
Ganghwado is the fifth biggest island of South Korea. It is in the Han River estuary and considered the 'roofless museum' in Incheon City. Ganghwado was the center of fighting during the Joseon Dynasty.

Nowadays, you can see such places with fortifications and walls against invaders during that period. Explore the following historic sights...

The famous Yeongmijeong Pavilion can be seen in the Chojijin area, where you can also enjoy a beautiful view of North Korea's Gapung county.