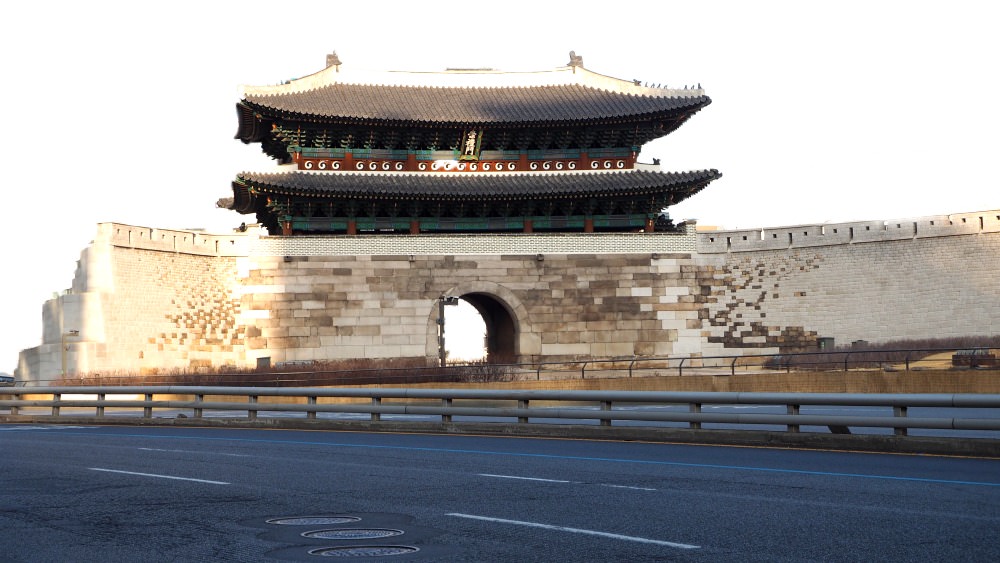 Gate's photo taken across the road in Namdaemun

Sungnyemun Gate or Namdaemun Gate is one of the most famous gates among the four main gates of old Seoul.

Sungnyemun was built when the Hanyangdoseong (Hanyang City Walls) were built along the four major mountains surrounding the capital city.

The four main gates and four ancillary gates were built to specific sections including Sungnyemun or Namdaemun ‘South’ Gate.

FACT: 'Hanyang' was the former name of the capital city before it was changed into its present name 'Seoul'.

Sungnyemun literally means “the gate of exalted ceremonies.” It was given that name because it is the area where ancient and traditional Korean ceremonies have been performed.

Such ceremonies include greeting and sending off envoys and important officials, offering shaman prayers during the drought period, among other ceremonies.

This gate is one of the most conspicuous and historical treasures and artifact you can easily find in the middle of the bustling capital city of South Korea.

The gate is attractive and open to the public for the close-up encounter. Surrounding it is a small park and good for photography activities.

By day, it is simply interesting to look at, BUT it looks majestic in the evening when colored spotlights single-out its stunning structure while vehicles crisscross the streets.

You may visit this historic gate as part of your exploration in the surrounding area including the Namdaemun Market, Seoul Station, and other sites or public and private buildings in the area.

Both adult and children can easily explore the area as it is very accessible to all public transports. 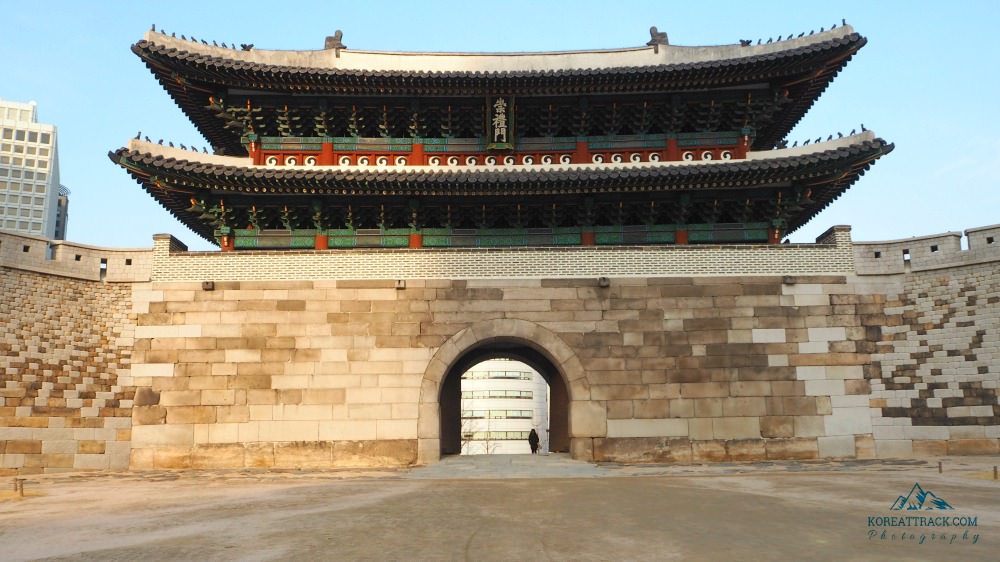 Close up view of the gate's structure

Sungnyemun Gate is quite conspicuous not only because of its central location but also due to its structural features.

Its shape and passage (the gate) are obviously sights that one can never miss to notice. Besides its attractive look.

The gate has a stonework base with a half-round arch in the middle.
The big door is facing south. 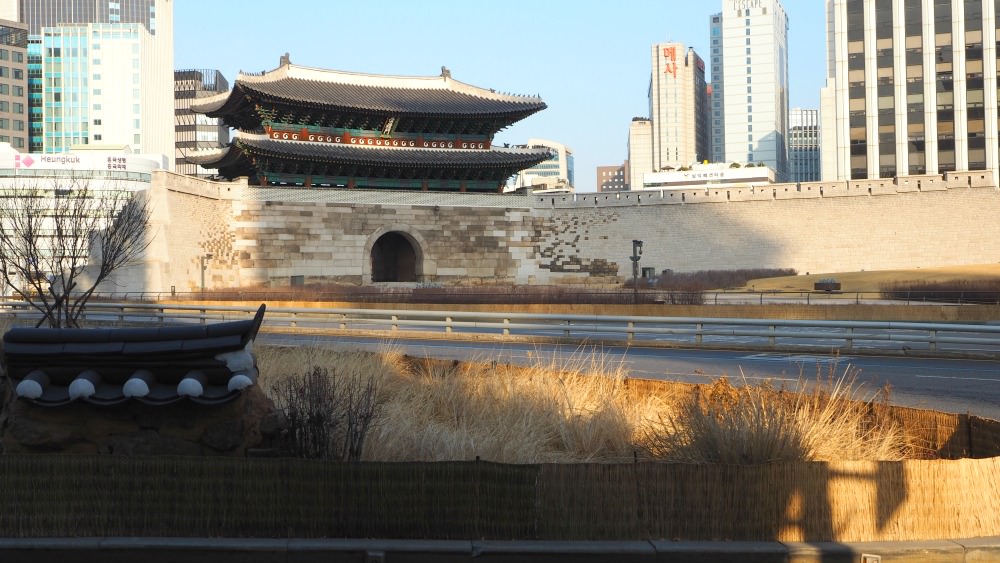 The Gate and its towering background buildings

1932 – The iron gates were installed in front and behind the round stone embankment of the gate
1950 – During the Korean War, the stone embankment and the pavilion were heavily damaged.
1961-3 – This was when Sungnyemun Gate was reconstructed and designated as National Treasure No.1
1973 – further restoration has been carried out including the decorative painting of wooden parts (the work is called ‘dancheong’ in Korean).
2005 – The park around the gate was created
2006 – Sungnyemun was re-opened to the public in March
2008 – The gate was damaged by fire through a suspected arson act. This happened in February. The suspected arsonist was finally apprehended as caught through a CCTV.
2013 – After the fire, the gate was closed to the public and was under repair. Upon completion, the gate was re-opened. 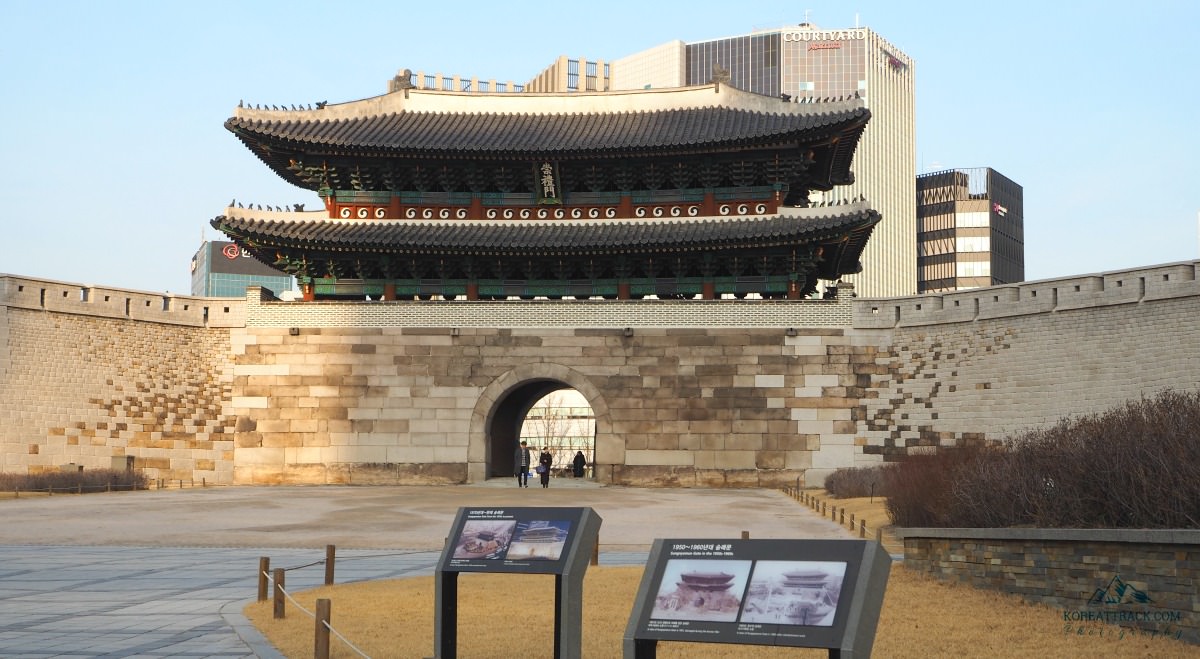 Park area of the gate

Being an old structure, let me describe this important piece of the historical artifact into three periods: Joseon, Early Modern, and Modern Periods.

Joseon Period
During this period, Sungnyemun Gate was not only used for security reason but also served as an area to greet and send off officials sent by the Chinese emperor (Cultural Heritage Administration pamphlet).

It was here that the King’s messengers to China or sending troops were official send out, among other purposed of the gate.

The gates were closed during curfew hours, and troops were stationed around it and in other main gates.

When closing and opening the gates, the bell is rung or drum beat. The bell was installed in 1425 during the 7th year of King Sejong’s reign and has been used since then except today.

Important events, such as long drought periods, the King would hold shamanic service to beg for the rain to come. During this time, the beating of drums and the ringing of the bell were prohibited.

When the rain finally would come, the South Gate would be opened, the markets reopened, and the beating of drums resume. 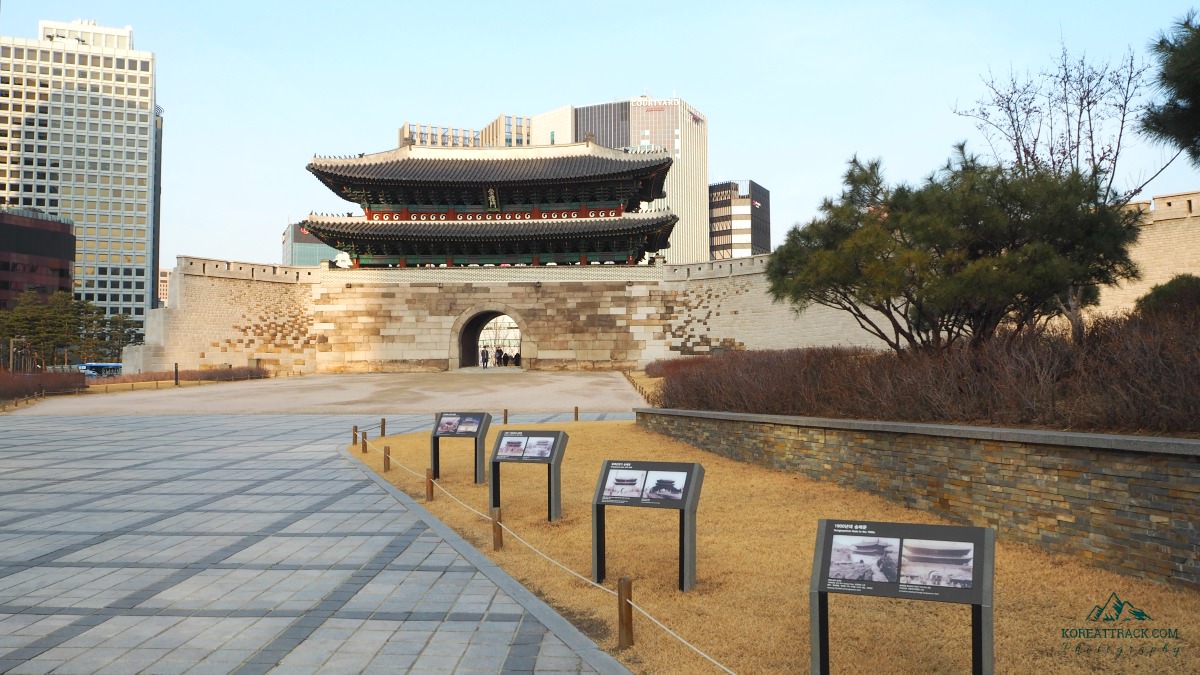 Early Modern Period
During this period, the streetcar was installed that went through the gate’s arch (1899). Some sections of the wall connected to the gate were demolished to give way for new roads.

This was when Sungnyemun lost its traditional purpose serving as one of the main gateways into the capital city. The same fate happened to the other three main gates.

When the country was under the Japanese rule in 1910, a circular stone embankment was built surrounding the Gate.

The streetcar tracks were built through the arch and around the gate. Sungnyemun Gate became a public space for events including exhibitions of industrial products.

However, by the late 1930s, people were not allowed to get close to the gate for some reasons. 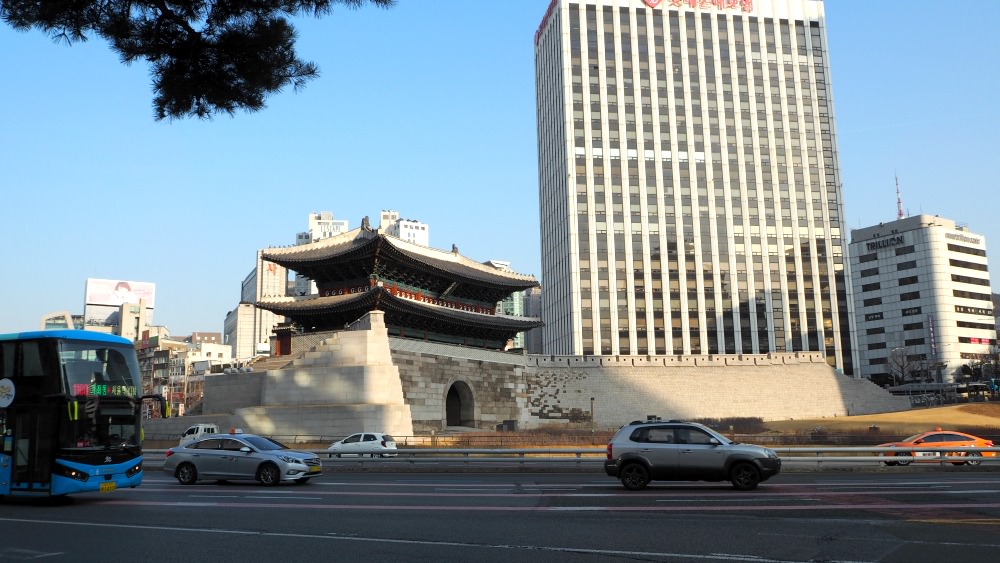 View of the gate with skyscrapers in the background

Modern Period
Restoration on some sections of Sungnyemun that were damaged during the Korean War began in 1953. These sections specifically include the stone embankment and the pavilion.

The further repair was carried out in the early 1960s—those areas damaged during the war. If you can visit, notice the bullet holes on the gate and stones that form part of the gate (especially the one stones-darker stones).

The small park that you can see around the gate was created in March 2006 accompanied by the opening of the gate, again, to the public.

Sungnyemun Gate (or Namdaemun Gate) was closed again in 2008 due to the fire that destroyed some parts of the wooden pavilion.

The restoration work began in 2010, and the gate was reopened again to the public in 2013.

Although you will undoubtedly notice that some stones are new (due to color differences, that is, the older and original stones are dark while the new ones are whitish or brighter), you have the sense of the full view and scale of the original gate.

It is impressive to see! 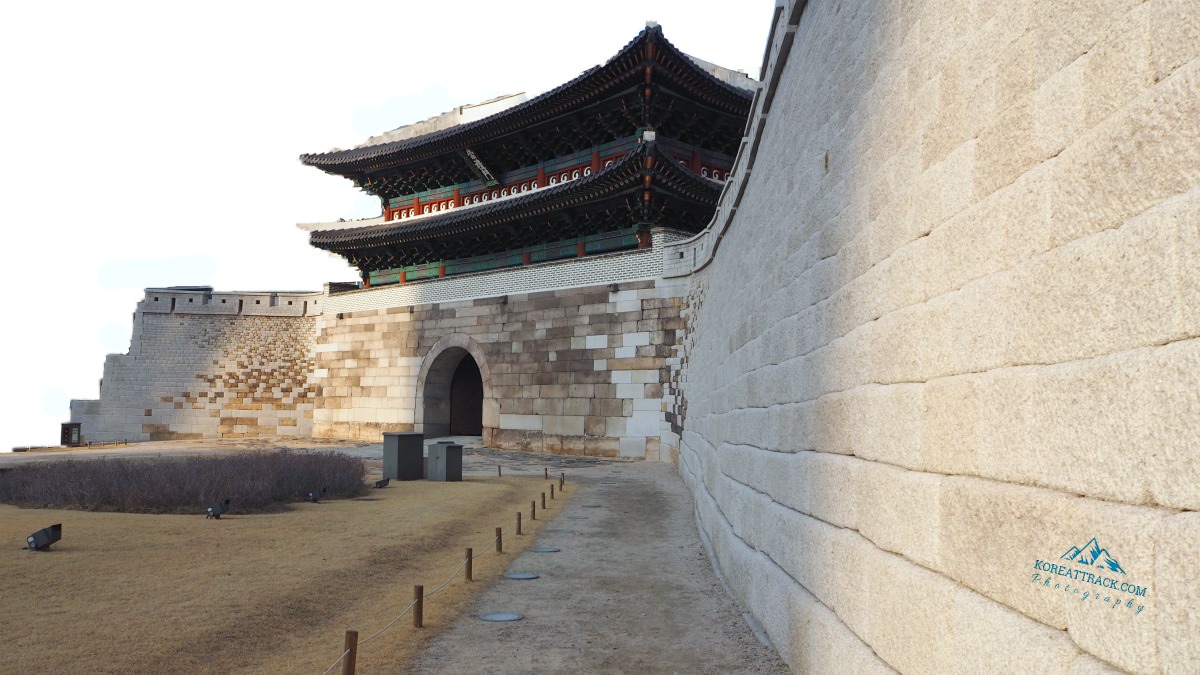 Namdaemun Gate area is popular not only among locals but also foreign visitors. The area has famous hotels, finance institutions, public buildings, market places, restaurants, nearby parks, and educational attractions as well as relaxing spaces. 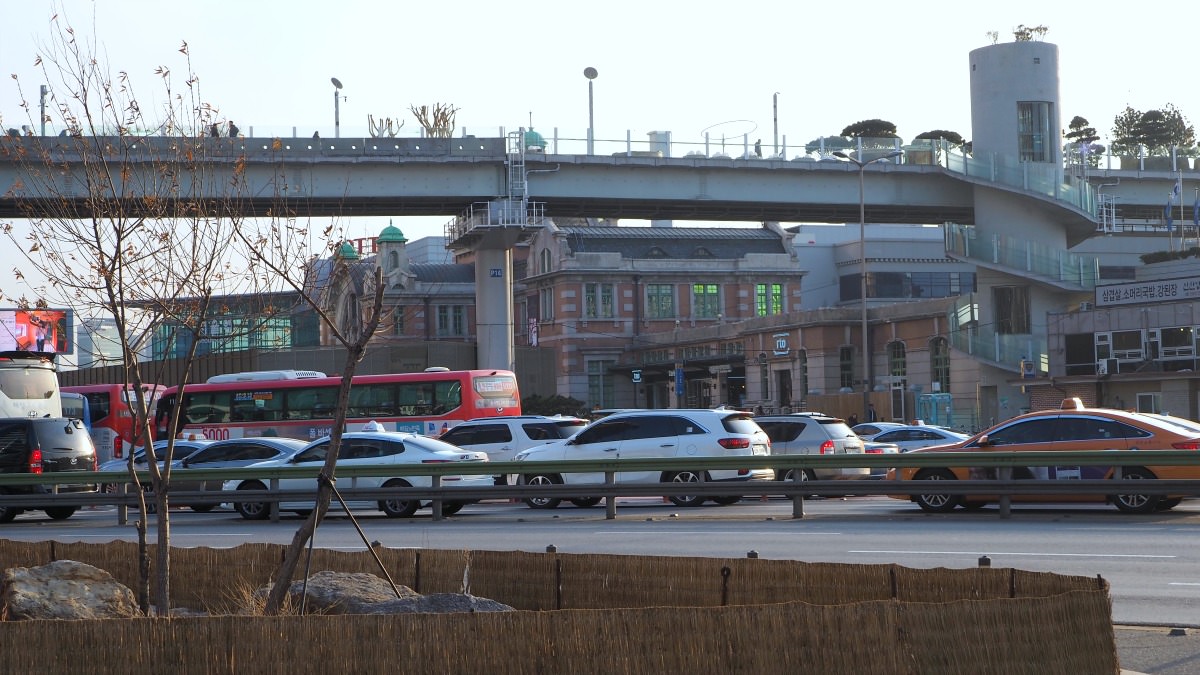 The gate is closed every Mondays
Getting inside and in the park of the gate is FREE!

Some notices and reminders…

If you are already in Seoul, you can get to this gate by walking. Otherwise, you can take any public transport that travels toward that direction.

Thanks for visiting and reading this article. Hope you find this helpful in your search.