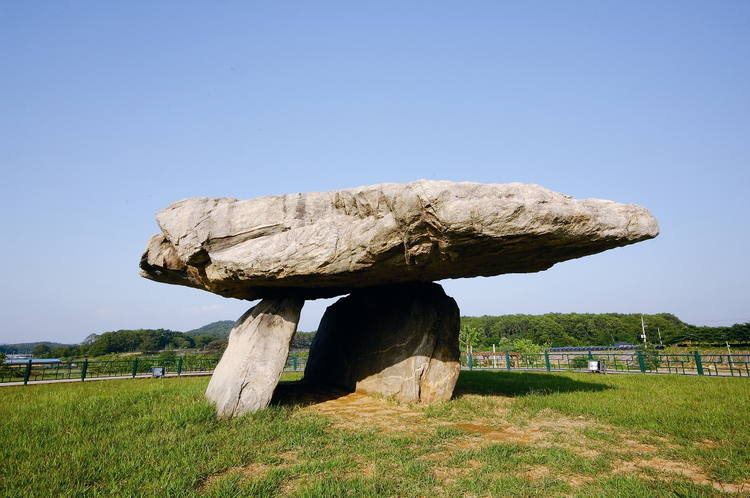 One of the dolmens located in three sites. The dolmens are grave stones in memory of the dead in the ancient times (Photo: Unesco)

The Three Dolmen Sites in South Korea is registered under the UNESCO.
The Gochang, Hwasun and Ganghwa Dolmen Sites features the most excellently preserved and has the highest numbers of dolmens in Korea.

Indeed, such dolmens cannot be found anywhere in the whole wide world.

Dolmens are megalithic tomb monuments, which were prominent structures in Neolithic and Bronze Age cultures throughout the world during the 1st and 2nd millennia BCE.

Interestingly, these dolmens sites are scattered in three distinct locations and geographical features.

The three Dolmen Sites within the over eight hectares of land includes the largest and most diversified group and is centered in the town of Maesan, along the southern foot of a group of hills running east/west.

Over 440 dolmens of numerous types have been registered in this place.
The Hwasun Dolmen Site, which is in around 30 hectares, is positioned on the slopes of a low series of hills, along the Jiseokgang River.

There are more than 500 dolmens in this group. In a variety of cases, the stone outcrops from which the stones comprising these dolmens have been recognized.

The Ganghwa Dolmen Sites (over 12 hectares of land area) are on the offshore island of Ganghwa, on mountain slopes. They tend to be located at higher grounds compared with other dolmens in other areas such as those found at Bugeun-ri and Gocheon-ri.

The Gochang, Hwasun, and Ganghwa Dolmen Sites preserve crucial proof of how stones were quarried, transported, and raised. The dolmens demonstrate how these types represent the northeast Asian dolmens.

The international prehistoric technological and social phenomenon that led to the appearance in the 2nd and 3rd millennia BCE of funerary and routine monoliths constructed with huge stones (the "Megalithic Culture") is nowhere more strongly represented than in the dolmen tombs of Gochang, Hwasun, and Ganghwa.

A significant collection of dolmens can be spotted in each of the three areas. This truth reveals the advancement history of the megalithic culture with many examples of numerous styles and types.

The presence of a quarry near the site is especially significant in providing references to the origins, nature, and developmental history of the dolmens.

The re-erection of collected collapsed or dispersed dolmens was accomplished. This work will be based upon careful clinical research study to establish the initial configuration and location of the dolmens.

The worst risk to the dolmens is fire and damage to the surrounding environment.

The dolmens have the authenticity of form, materials, and area.

Most of the dolmens have stayed unblemished since the time of their building and construction, and their present condition is the result of normal processes of decay.

A couple of have been taken apart by farmers. Their stones have endured intact, and their initial location and kind can be determined without difficulty.

Preserving the Dolmen Sites
The entire location of the three separate sites has been designated as a Cultural Heritage Site under the Cultural Heritage Protection Act, which requires that they be safeguarded and handled accordingly.

The spots and the area that extends 500 meters from the border of each spot have an additional defense under the Cultural Heritage Protection Act as a Historic-Cultural Environment Protection Area.

Any form of advancement or intervention needs authorization and environmental impact evaluation, and repairs need to be performed by licensed specialists. The locales are open to the general public for scrutiny and recreation.

Total duty for conservation, funding, and the preparation and execution of preservation policies for the locales and buffer zones rest with the authorized Cultural Heritage Administration.

Day-to-day conservation and management is the duty of the pertinent regional administrations (Gochang-gun County, Hwasun-gun County, and Ganghwa-gun County).

Management plans have been developed for each of the three homes within the inscribed site. Their primary goal is the conservation of the original character of the dolmen spots and their immediate environments.

To prevent forest fire, scrubs near the dolmens are removed frequently.
Dolmens that have collapsed due to tree roots and other elements are being investigated. They are then extensively studied and brought back to their initial state.

The Gochang, Hwasun, and Ganghwa Dolmen sites consist of the highest density and biggest range of dolmens in Korea, and undoubtedly of any nation.

The Hwasun Dolmen Site (around 31 hectares) occupies the slopes of hills, along the Jiseokgang River.

The presence of a quarry near the spot is specifically vital in supplying recommendations to the origins, nature, and developmental history of the dolmens, as well as contributing to the integrity of the property.

Their main goal is the conservation of the original character of the dolmen locales and their relevant environments.