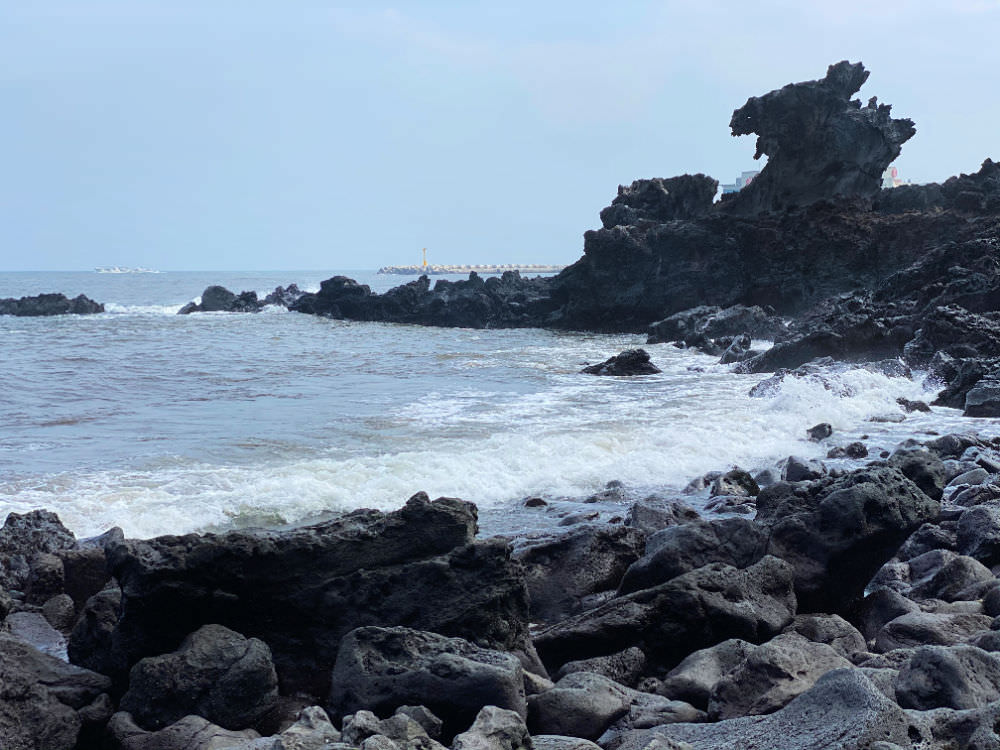 Yongduam Dragon Rock is a famous sight by the sea located north to Jeju City, Jeju Island. The dragon head is facing the sea, which makes this image a source of legends.

Yongduam Dragon Rock must be formed from the lava spitted out by the erupting volcano and met by the sea waves thousands of years ago.

Since this site is located close to Jeju City's downtown area and only a few minutes from Jeju International Airport--it should be very accessible when you're in the area.

It will only take a few minutes to appreciate the dragon's head lava. Therefore, you are wondering whether it's worth your time!

The answer would be YES if you like such a feature and loves to the sea while having a cup of coffee by the seaside cafe or enjoying a seafood meal in one of the restaurants nearby facing the sea.

I, personally, love the place as I have been here many times. I saw the dragon, had seafood at a seaside restaurant (seafood over the fire) and strolled with friends along the road by the shore. 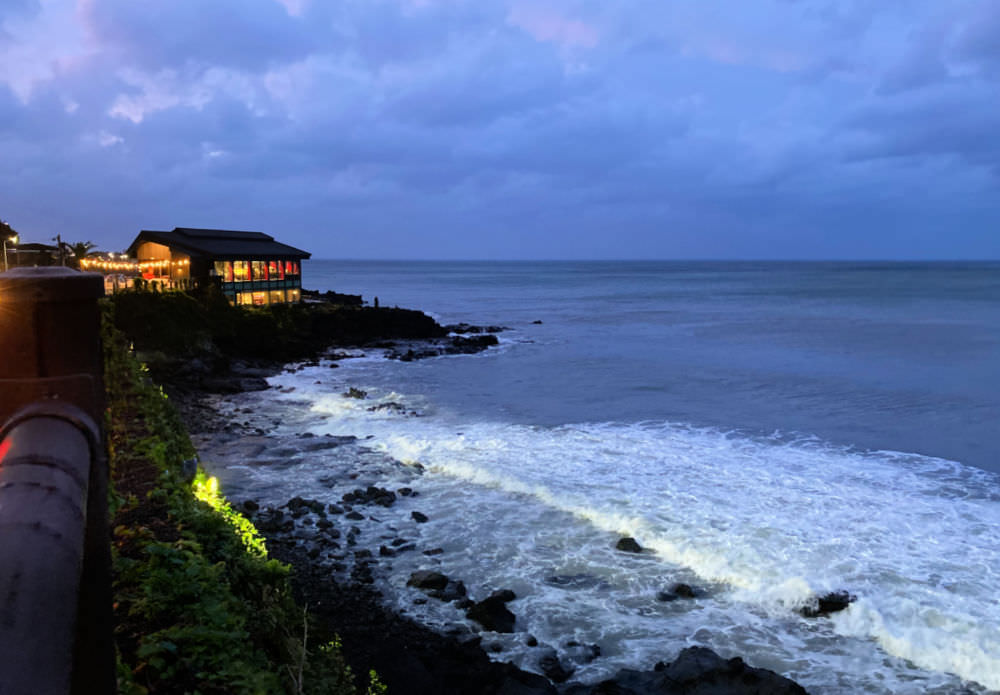 Fantastic view of the shores of Yongduam

What the Legends Say

Stories abound in all cultures around the world, especially on islands where groups of people free from noise. By the way, the legends told here are from the older generation before the island became a tourist destination.

One of the legends says that a dragon (a symbol of long life, strength, wisdom, etc. in East Asian culture) stole a jade from Hallasan Mountain. Caught in the act, the mountain god shot the dragon with an arrow.

Although it tried to fly away but couldn't due to its wound, instead, it attempted to dive into the sea to hide but couldn't make it and died while its head is still visible.

Along the rocky area of Yongduam Dragon Rock Head, you can observe some 'haenyo' (women divers) working to catch seafood to sell. 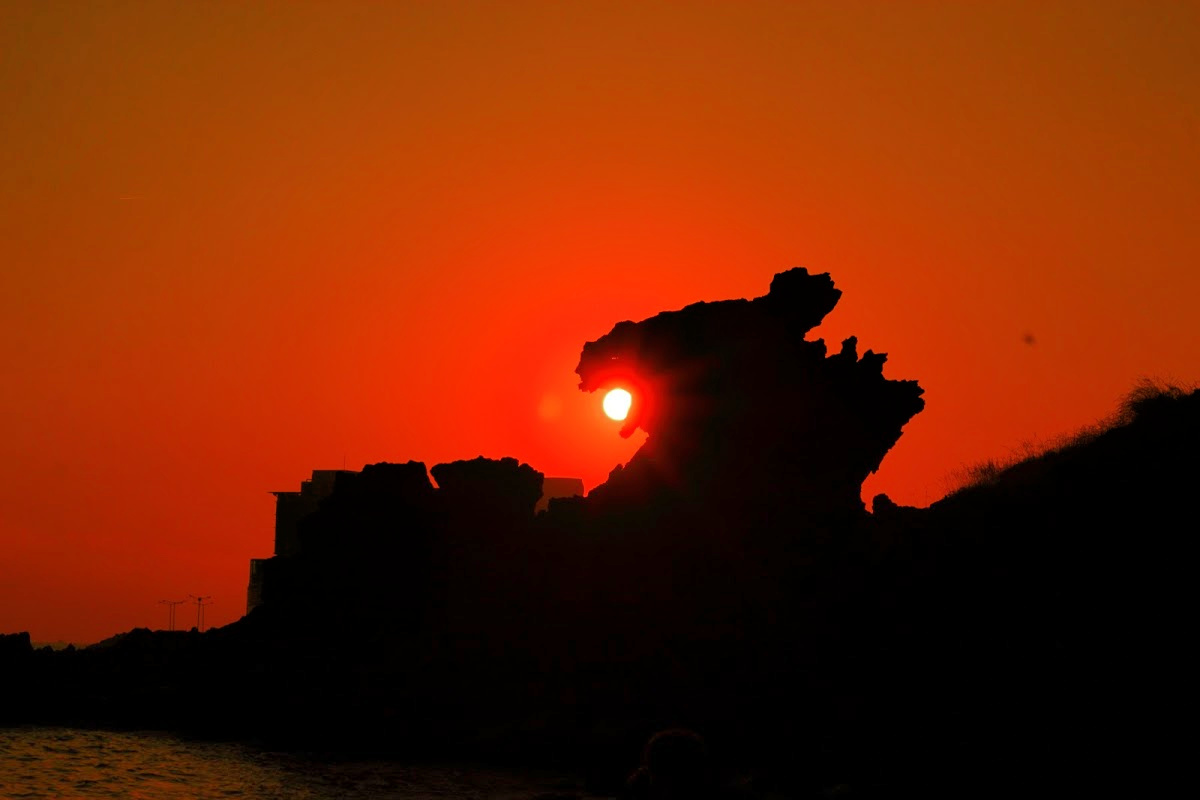 The famous Yongduam Dragon Rock with its dramatic sight during sunset

Just close to the Dragon Head, you will find makeshift tables and seats prepared by women selling seafood and drinks to the visitors.

If you prefer a more formal setting, head for the nearest seafood restaurants, which offer fresh seafood from the sea of Jeju Island.

Young, old, and children visit this site. Young couples and curious teenagers come to see the dragon and take selfies and photos for their social media! Yes, it is Instragrammable! 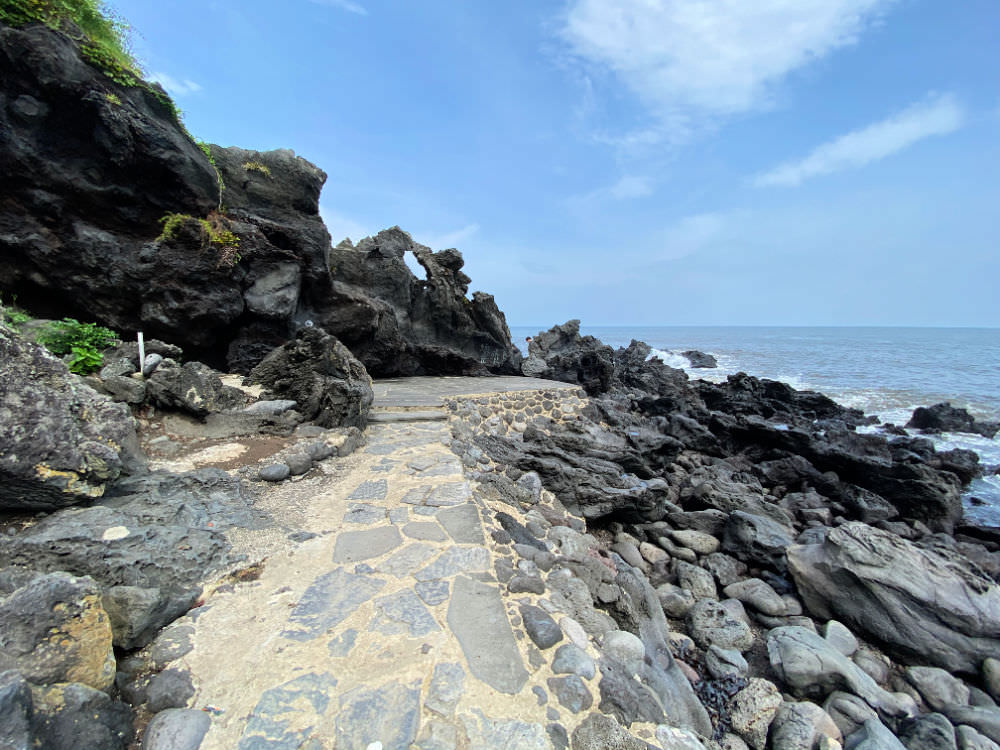 One thing I noticed the last time I visited the area was the space. I guess they want to accommodate the increasing number of visitors or tourists on the site.

Alright, besides the restaurants, makeshift eatery, and cafes, you can find the following facilities...

Also, if you need a tourist guide, you can register onsite for interpretation service. You can avail of the service in English, Japanese, and Chinese as speakers of these three languages are the most frequent visitors.

Now, you might wonder where to go next after Yongduam Dragon Head. The following subtopic, you will find the attractions not far from the Yongduam area.

Yongduam Haesu Spa Land
This spa is established where you can watch the beautiful nature of Jeju Island. Yongduam Haesu offers fresh seawater bath, spas, and jjimjilbang (saunas). It is accessible 24/7.

Yongyeon Pond
The landscape and nightscape are incredible here. The pond of Yongyeon was formed by the water coming from the mountain valley. The freshwater of the lagoon flows to the sea and turn salty.

Jeju Mokgwana
This is a historical site and a monument worth seeing. Jeju Mokgwana is where the former central government office of Jeju magistrate managed and administered political affairs from 1392 to 1910. 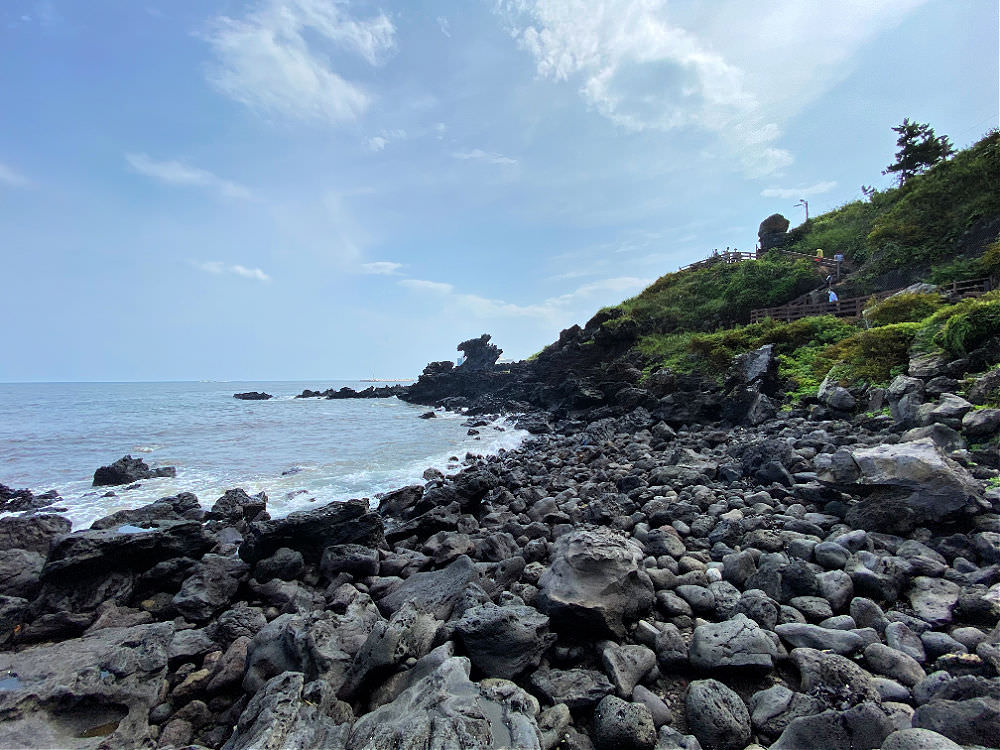 Getting to Yongduam Dragon Rock

When you are somewhere in Jeju City, you can get here quickly using public transportation-bus or taxi.

By Bus
At Jeju International Airport, ask airport people or the tourist information center for the bus number. They will kindly tell you.

Take the one that goes to Jeju-si (city) Jungang-ro. Get off at Yongdam Rotary when you hear the announcement on the bus. It should take around 10 minutes to reach the rotary.

By Taxi
If you have a partner, friend, or a family member, take a taxi from the Jeju International Airport to Yongduam because you can save more and very practical. Taxis in Korea are reasonably inexpensive.

It should take less than 10 minutes to reach Yongduam Rock.

Thanks for checking out this article. Please, let me know should you need more information. Enjoy!