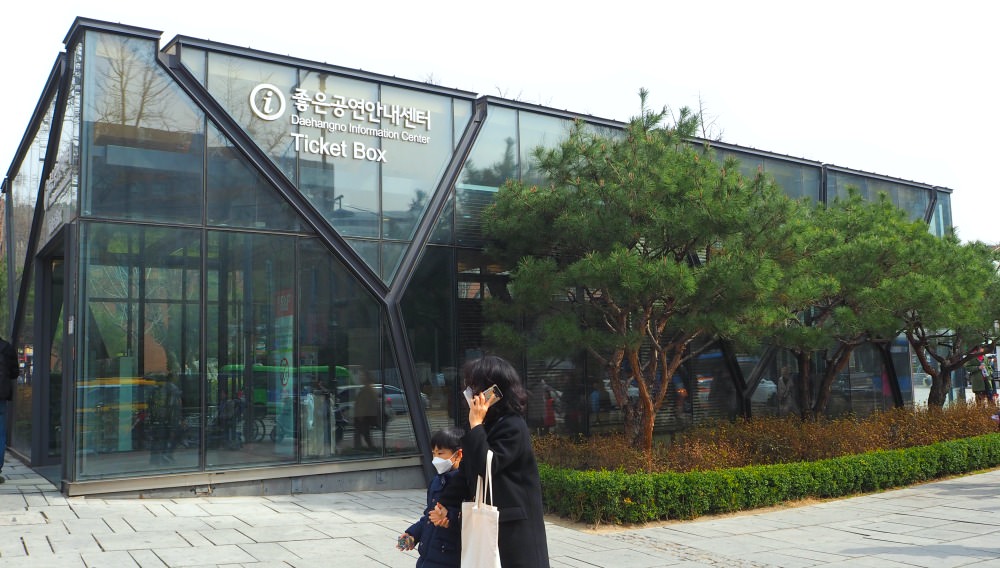 Daehangno Street is a famous street located at the soul of Seoul, South Korea. This district is known to be an area for young people and students.

More than that, it is where young artists try to hone their creative skills and promoting them to the public through actual practice and performance.

Daehangro Street is the former site of Seoul National University, the top higher education institution of the land. Although the university has been relocated to the more spacious area in Gwanak District, one can still find its remaining symbol—Seoul University Hospital.

What is left of SNU is a memorial sculpture placed in front of the art hall in the middle of Marronnier Park. 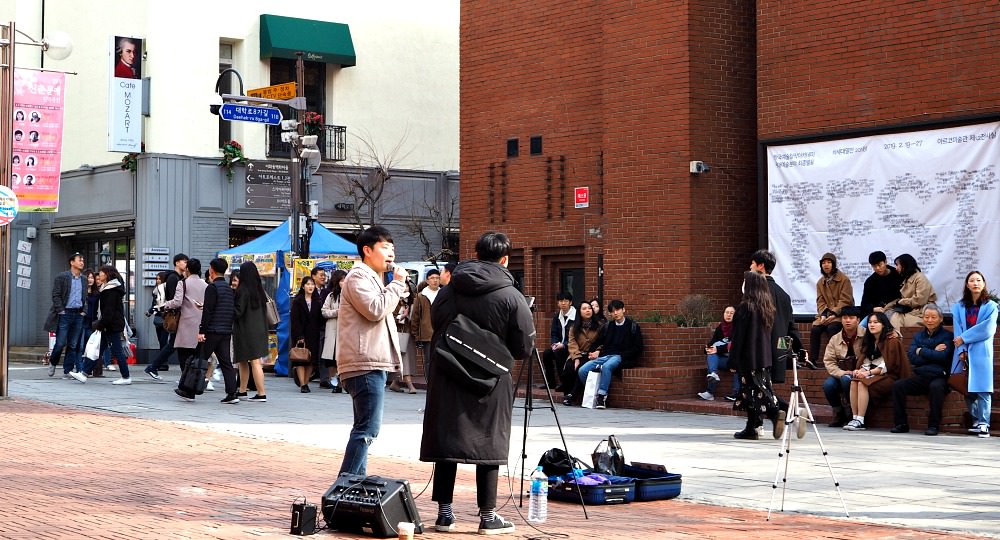 Young performers at Daehangno trying to develop their skills in singing 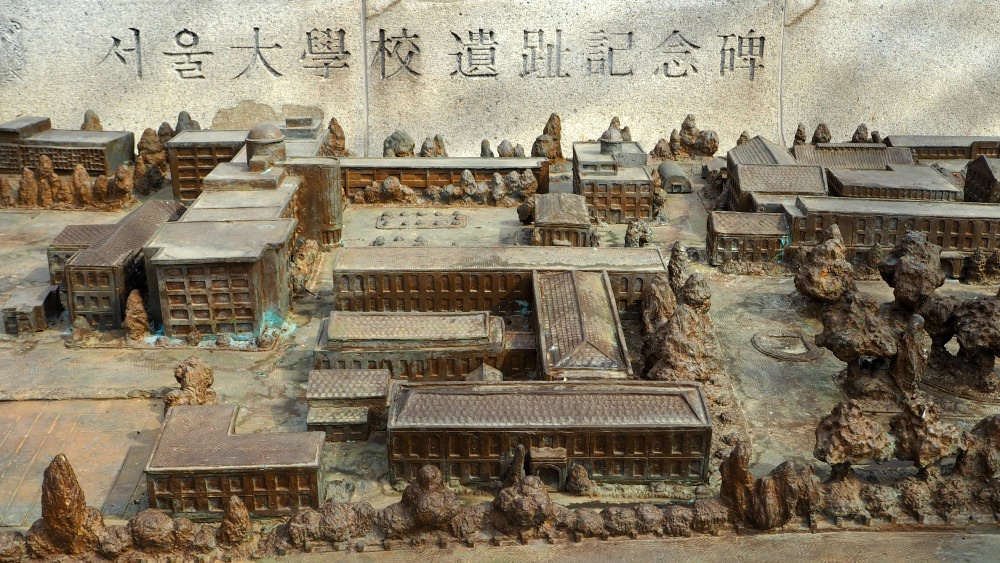 At 9:00 AM, 17 January in 1975, the last lecture on Seoul National University’s Dongsung-dong campus was held in Lecture Room 407 in the eScience Hall of the College of Liberal Arts and Sciences. The lecture room was creaked with age, but how clear the sound was! Although we will no longer run on the ground here, the memories we hold will be cherished forever, with our heads held high with pride. <24 March 1975, Seoul National University Newspaper>

Seoul National University is Korea’s first national university and one of the most important educational institutions in the country’s history. This site commemorates the home of Seoul National University from its inception in 1946 to 1975. During those years, the Dongsung-dong campus housed the University headquarter, the College of Liberal Arts and Sciences, and the College of Law. In front of the campus flowed a small stream, endearingly called the “Seine River,” across which ran a bridge colloquially know as the “Mirabeau Bridge.” In this romantic setting, a unique academic culture was born, embodying some of the finest principles and values in Korean society. Although Seoul National University in 1975 moved to the Gwanak Campus, its current location, the legacy of the Dongsung-dong Campus is everlasting. 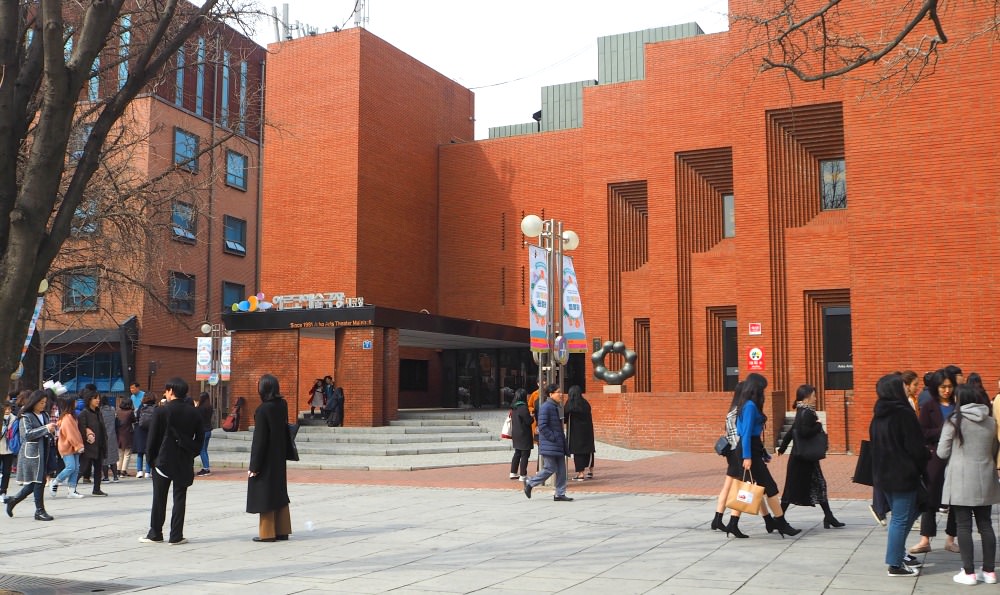 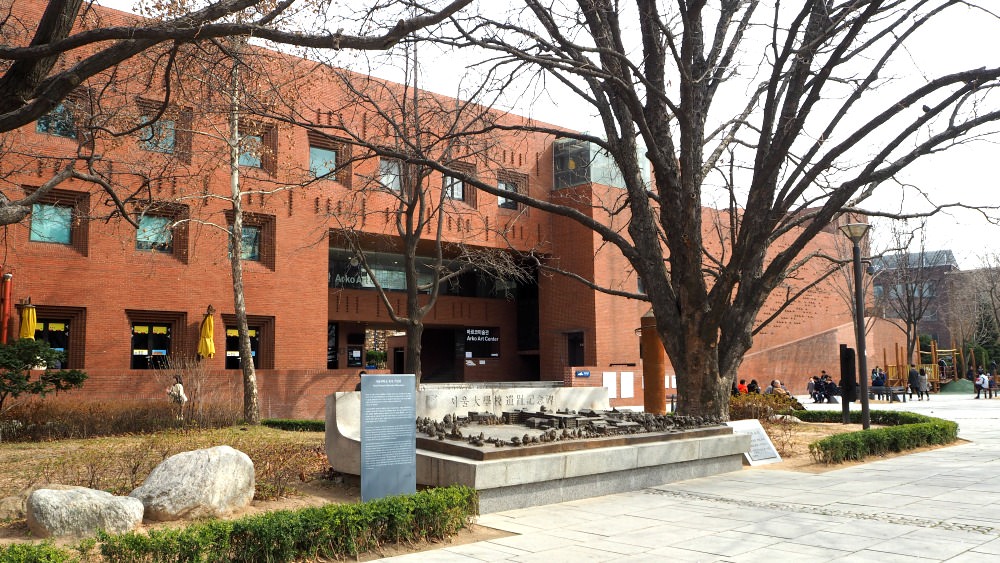 During the 1980s, arts and theatre groups started moving to Daehangno for some advantageous reasons. Such reasons could be the accessibility of the area and the already burgeoning of art structures in the area.

Soon after, the street turned into a cultural center where myriad of local artistic skills pool together and show off their talents through practice and public performances.

At Daehangno Street, one can readily see movie theaters, live-cafés, coffee shops, café’s, pubs, art shops, among others. Usually, performers and watchers extend their visit by going to such places.

The street transformed into an entertainment district just in a short period. Aside from its accessibility, Daehangno is not considered an ‘expensive’ neighborhood, and so it attracts people who are into real arts and not ‘classy’ or fancy things.

Daehangno is famous for its small theaters, among over 30 theaters that mushroomed in the district.

Some of the famous ones include the Parangsae (Blue Bird Theatre), Hakjeong Theater that is contributing to the popularity through the performances they hold. 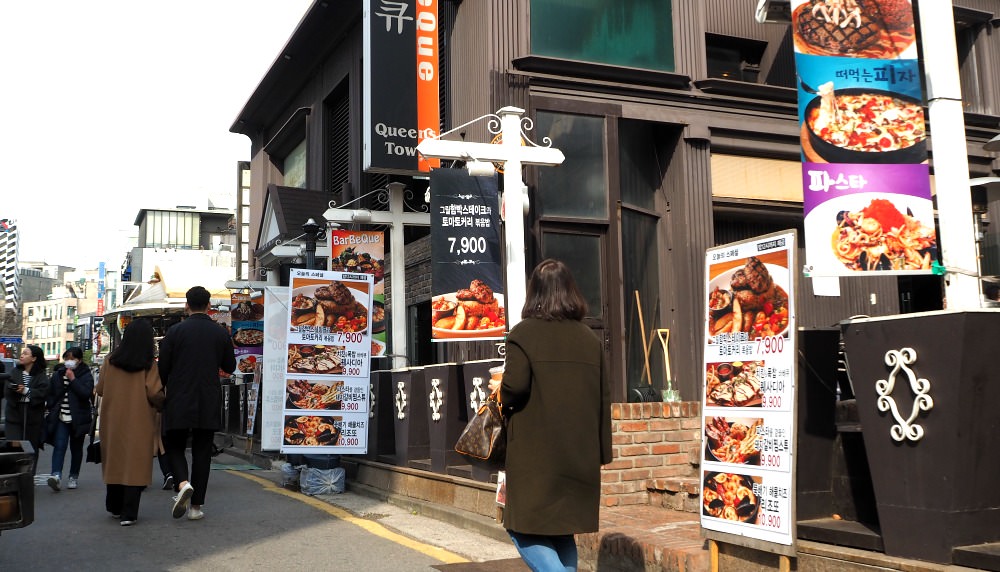 Daehangno is now known as the ‘root’ of art performance district in Korea.

Being now famous and regularly visited by not only youngsters but people of various ages, Daehangro’s business environment is also flourishing.

The exciting atmosphere and space of Daehangno District Streets are being loved more by the younger generation. One of such reasons is that it is close to an educational institution which promotes arts and creative field of studies.

OBSERVATION: Daehangno District Streets is gaining popularity not only locally but also outside the country. Foreign visitors come to enjoy public performances, shows in theatres, and simply explore the lively atmosphere. 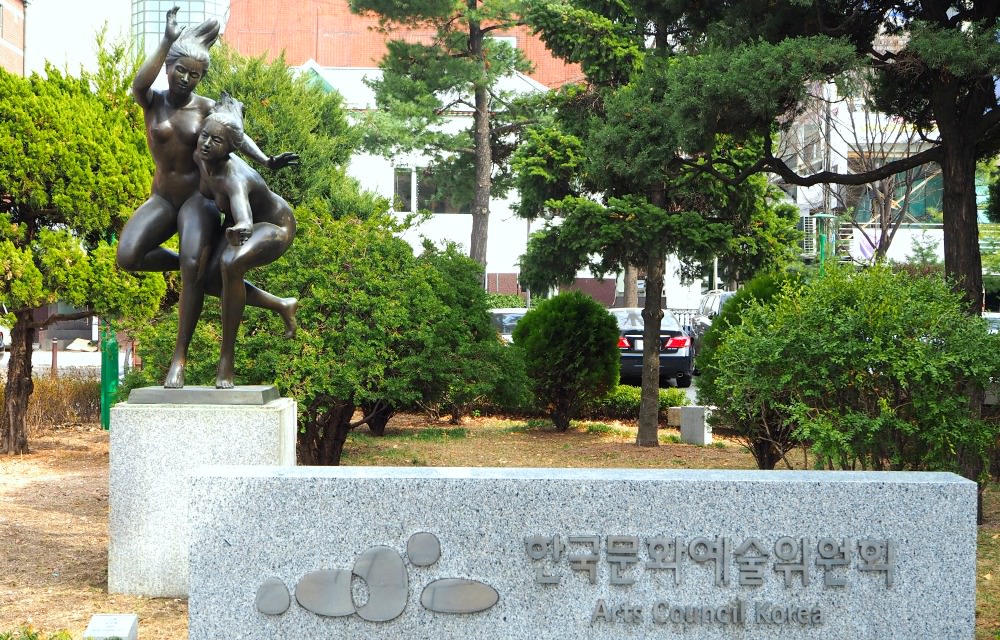 Historic Site: Arts Council Korea
The construction work of this building began in August 1930 and finished in October 1931. It was a brick building with 3 stories and was built as the main building of Gyeongseong Imperial University. This building is called the Former Administration Building of Seoul National University because it had been used as the main building of this university for 27 years, since the restoration of independence until 1972. The first modern Korean architect, Park Gilryong, designed this building and it has 3 stories above ground and a basement below. The exterior is covered with tiles of bright brown color. The fact roof and plain exterior of the building illustrate the tendency of architectures in the 1930s to pursue modernism. The entire exterior of the 3rd floor and central entrance porch take the form of a semicircular arch. Around the central entrance, walls from fluent curves and make an elegant impression. The campus of Seoul National University was moved to Sillim-dong in 1972, and it is the only building which remains on the former campus site. Since the move of Seoul National University, it has been used as an office building for the Korean Culture and Arts Foundation. The name of this organization changed to the Arts Council Korea in September 2005. 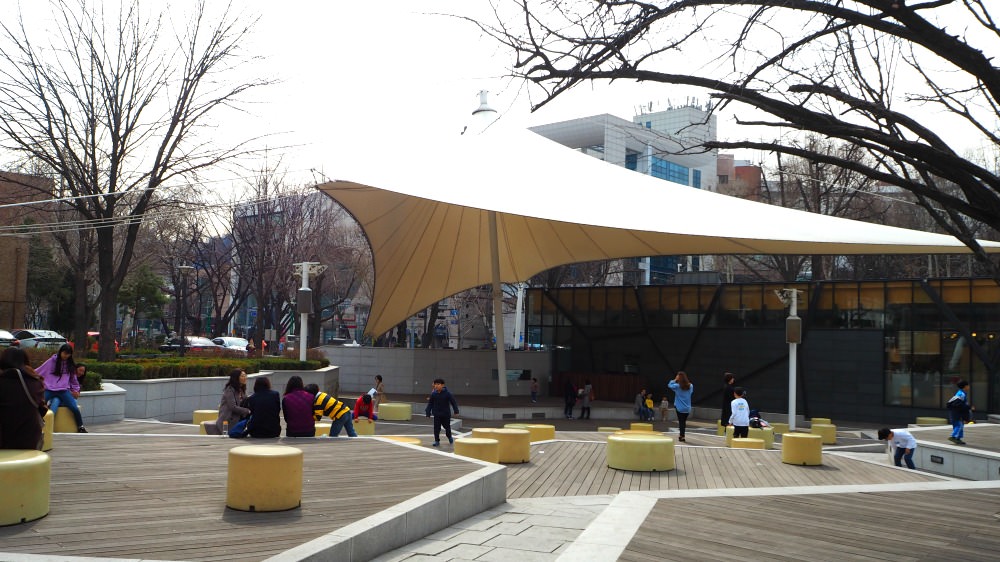 Daehangno is a public space, and it has facilities that are either available for free or purchasable. If you plan on performing in one of the corners or on the stage, you need to reserve/register your activity.

Some of the facilities are the following...

Seoul Subway Line
Take Subway Line 4 and then get off at Hyehwa Station Exit #2 (or #1). Exit 2 is the closest to the Marronnier Park and art/performance centers.

Buses
Many buses travel in this area, both the express and regular ones. 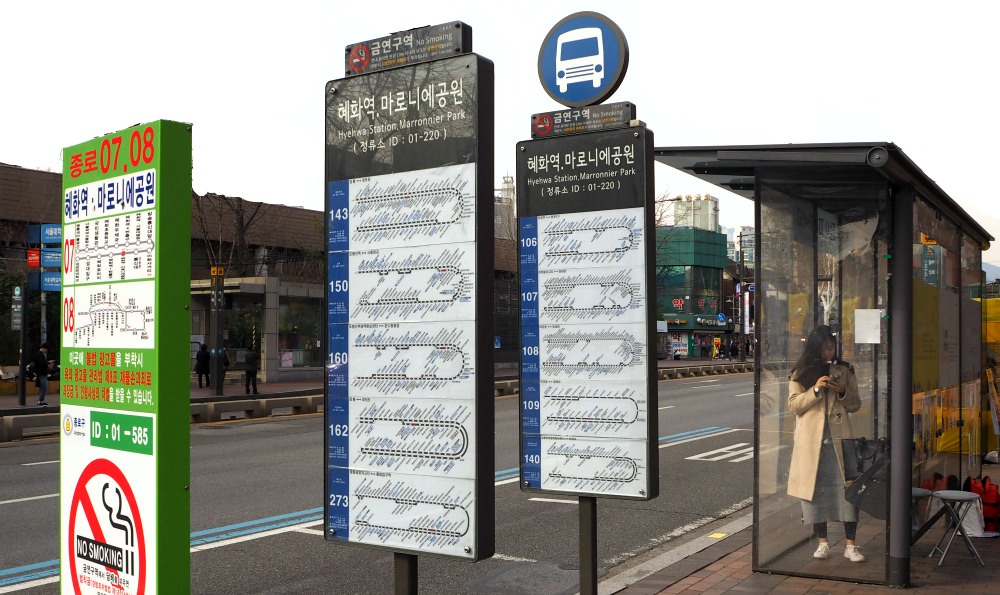 Of course, there are many places you can explore nearby Daehangno District. You can shop at small stores dealing with traditional products or electronic products. Besides, spaces, parks and historic sites are also nearby.

Thanks for viewing this page and hope this has helped you.