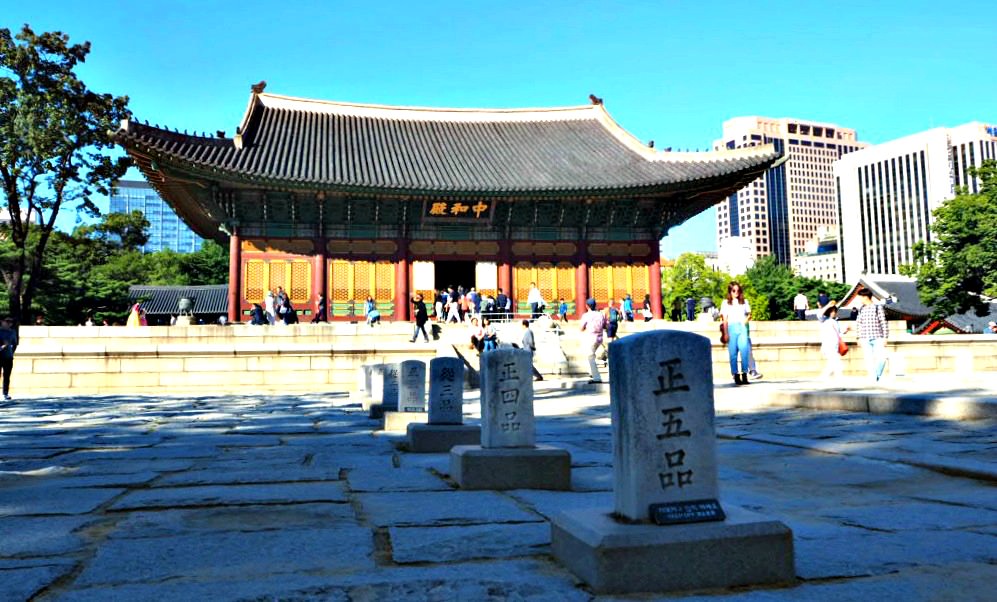 Deoksugung Palace is one of the most beautiful palace sites in Seoul, Soth Korea. It is sitting amidst the busy Seoul thoroughfare, Western-style old buildings, and located with very accessible public transports.

It was a refreshing and beautiful early summertime when we visited this palace. I know I've been there before and for quite some time have never revisited it.

Uniquely speaking, Deoksugung Palace is considered the only palace in Korea that sits among the Western-style buildings in the busy surrounding of Seoul.

Deoksugung Palace area became a proper palace only when Gwanghaegun (1575-1641) ascended to the throne and named it Gyeongungung Palace in 1611.

During those decades, Deoksugung was used alternately as the temporary royal residence and an official palace by royals. It was only in 1907 that it gained its official name 'deoksugung' - meaning "the palace of virtuous longevity." 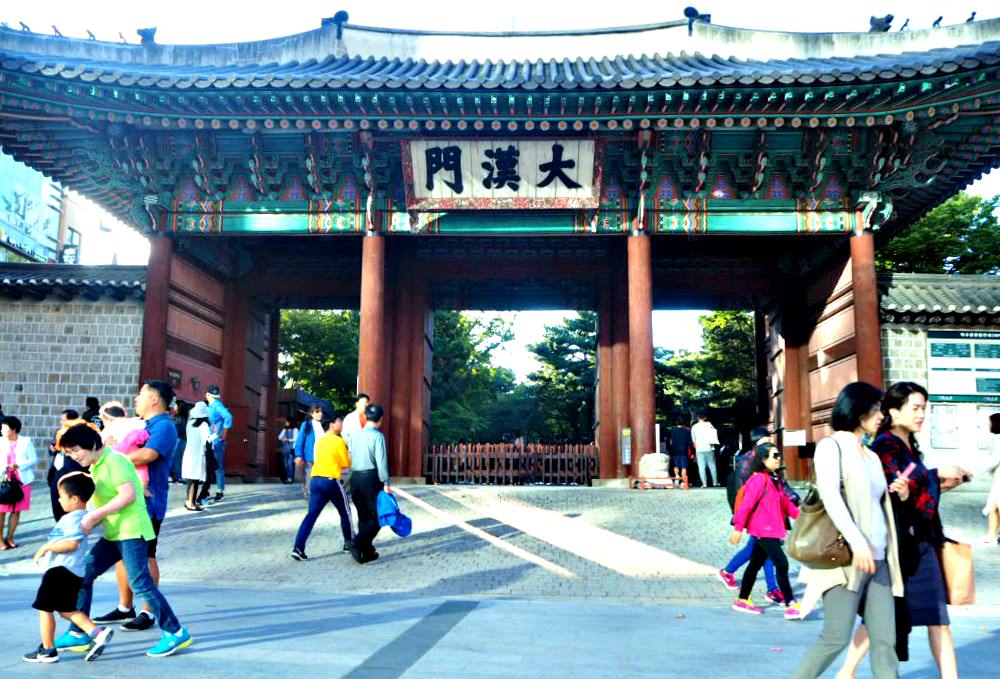 Among the Famous Five of Seoul's palaces, Deoksugung is the last one to be built and became the seat of power when the Japanese destroyed Gyeongbokgung in 1592. King Gojong also used this palace after he fled when his wife got assassinated in 1895.

Compared to other palaces in Seoul, Deoksugung is not so splendid but a very historical and crucial political place of the nation's development. You will notice that much taller buildings, such as business complex, the new City Hall, and hotels, among other structures, surround this ancient national treasure.

Inside the palace, you can enjoy art pieces at the National Museum for Contemporary Art (W3000), most of which are masterpieces by Korean artists.

The (concrete) steps of this museum is a favorite photo-spot among graduating students for this album. You can see them usually in June who are all dressed up and excited about everything--parties and celebrations.

Yup, I have seen the exhibition of famous Korean painters and artists. By looking at their pieces (masterpieces) as if you can feel and get to know the artists as they painted their own experiences and feelings through their arts.

It will take around forty minutes to quickly look at the exhibits, but if you really want to study them more carefully, make sure you are prepared to do so. I really enjoyed the exhibitions and felt it's worth my time. The exhibits are regularly changed depending on the availability and cost of holding art pieces.

Within the walls of this historical place, you will find structures that were used by royals, servants, visitors, and soldiers during those periods.

These structures include gates, bell pavilion, quarters, meeting halls, foreign designed buildings, among other structures you can observe. 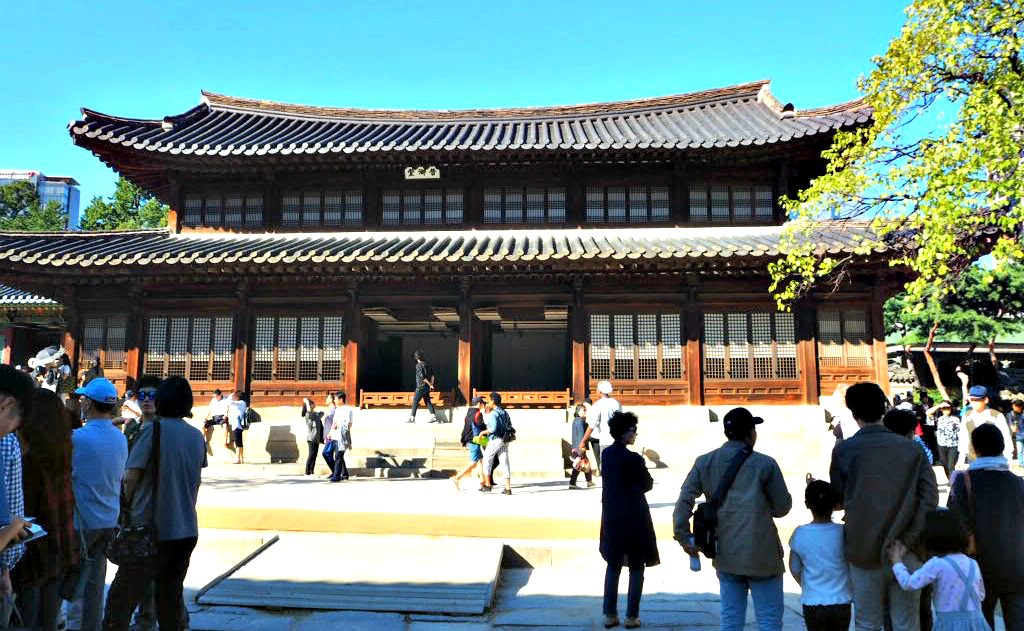 Hamnyeongjeon is built with a terraced rear garden where the king received his officials and foreign visitors. The building got destroyed by fire in 1904 but was restored sometime in that same year.

Jeonggwanheon (정관헌)
This particular building looks quite unique and different compared with most structures inside the palace, that's precisely because it is built with a colorful design, Romanesque style, by a Russian architect named A. I. Sabatin.

The building is being surrounded by outer rows of covered colonnades, and the wooden verandas were built facing the east, south, and west. The top of the columns is decorated with traditional Korean symbols such as the blue and golden-colored dragons, flower bases, and bats.

Foreign delegates and envoys used to spend their time and hold banquets in this building. Even King Gojong is known to have enjoyed his coffee with the presence of foreign visitors. 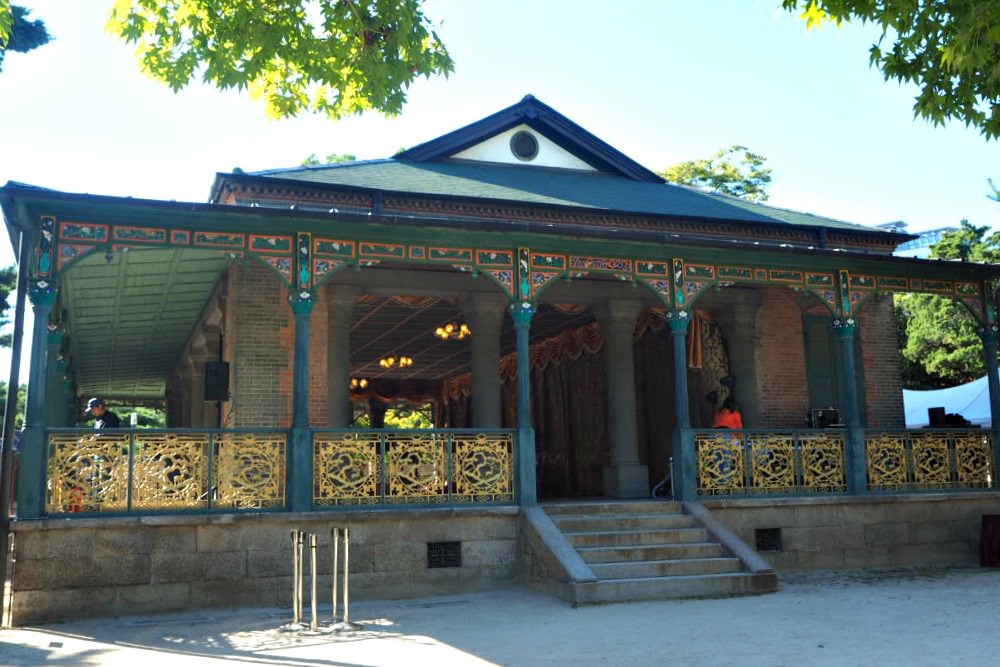 Jeukjodang Building
Jeukjodang is the name given to this structure by the royals Gwanghaegun and In-Jo. The two royals gave that name during their ascension to the throne.

The nameplate you can see at Jeukjodang Building was hand-written by King Gojong himself, who ruled the Joseon Kingdom in 1863-1907 as the 26th king.

Seokjojeon Hall
Seokjojeon Hall is another building with Western-style designed structure. A British business person was building this structure when, in 1905, the property rights of Korea were transferred to Japan at that time.

Seokjojeon was finally completed in 1910, as you can see today. When King Gojong died, the building was turned into a Japanese art gallery that was open to the public. 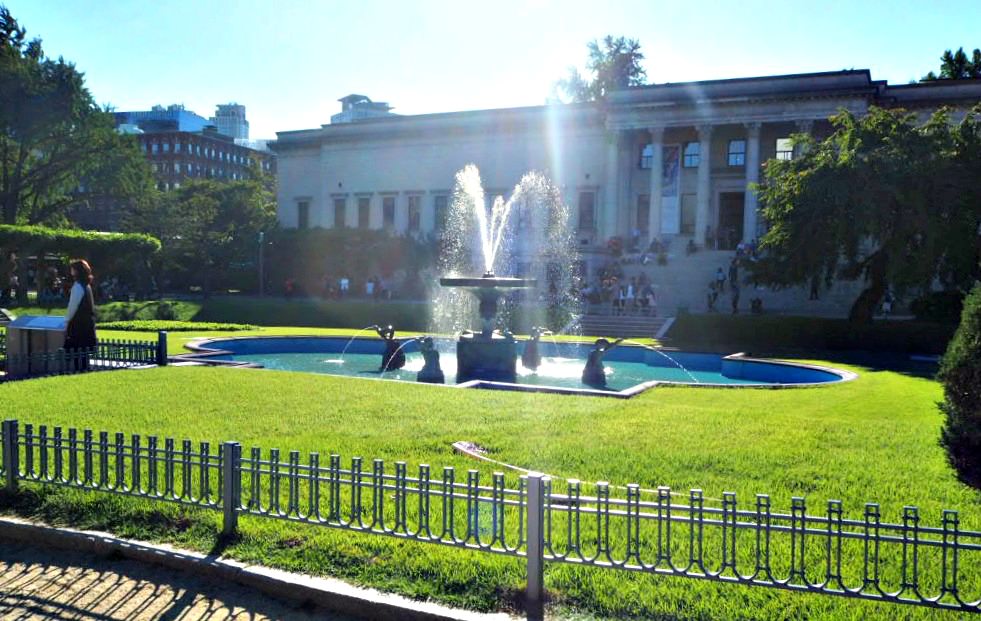 Changing of Guards
As done in the past, Deokgugung Palace is still being guarded ceremoniously by palace guards wearing the traditional Korean military uniform.

Changing of guards during the day is an exciting sight you can witness. Usually, I witness this spectacle after lunch as I pass the place during our quick stroll while still full!

Opposite of Deoksugung is a unique place. I say it is unique because you can, obviously, both the old and the new City Hall buildings. Of course, only the new own functions as the government's office while the old one turned into a metropolitan library. You will enjoy the vast and spacious plaza of the city hall with green grass during summertime.

Then, coming out from Deoksugung Palace and turning left, a road will lead you to the modern Seoul Museum of Arts. The area where this museum is located could be quite crowded before and after lunchtime because most office workers, among others, would take a stroll after their sumptuous meal with their right (or left) hands holding drinks (coffee latte or americano?).

Further up the road, Jeong-dong Road, you will find the famous Jeongdong Theater where you can watch traditional Korean performances for a fee. Also, in the underground of City Hall station, you can find an array of shopping arcades.

Getting to Deoksugung Palace

The palace is easily accessed via Seoul Subway (metro), bus, taxi, and private vehicles, as it is at the heart of Seoul.

By bus, you should get off in front of Seoul City Hall Deoksu Palace Bus Stop, which is located just by the walls of the palace. You can pick any of the following buses...

As a hint, if you are already in Gwanghwamun Square, Gyeongbokgung Palace, Insadong, Jongno, Seoul City Hall, Cheonggyecheon Stream, or Sodaemun areas, know that you are just a few hundreds of meters or a kilometer away from Deoksugung Palace!

I'm just saying that you don't need to ride any vehicle. A short and leisurely walk will bring you to this site quickly!

Accommodations Beside the Palace

Travelers will find it more comforting to learn that they can stay very close to the palace and explore other sights from there.

Located at the heart of Seoul, Deoksugung Palace is not only a famous travelers' destination but also where they stay overnight or days during their business or leisure visit.

There are famous and classic hotels and proven with their excellent service. You can stay at any accommodation from a budget one to a 5-star ranked hotel nearby Deoksugung. 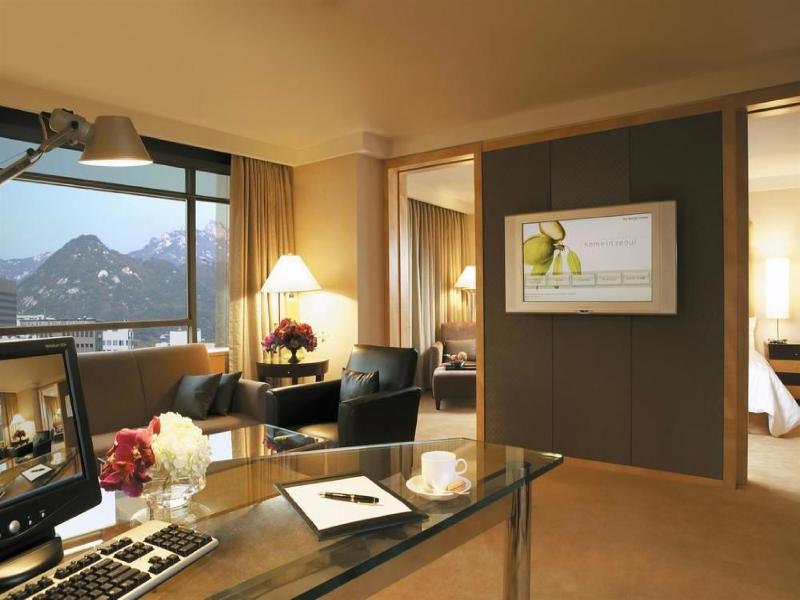 And more choices at this credible online hotel provider.

There you go, and I hope you enjoy your exploration fully inside the palace.