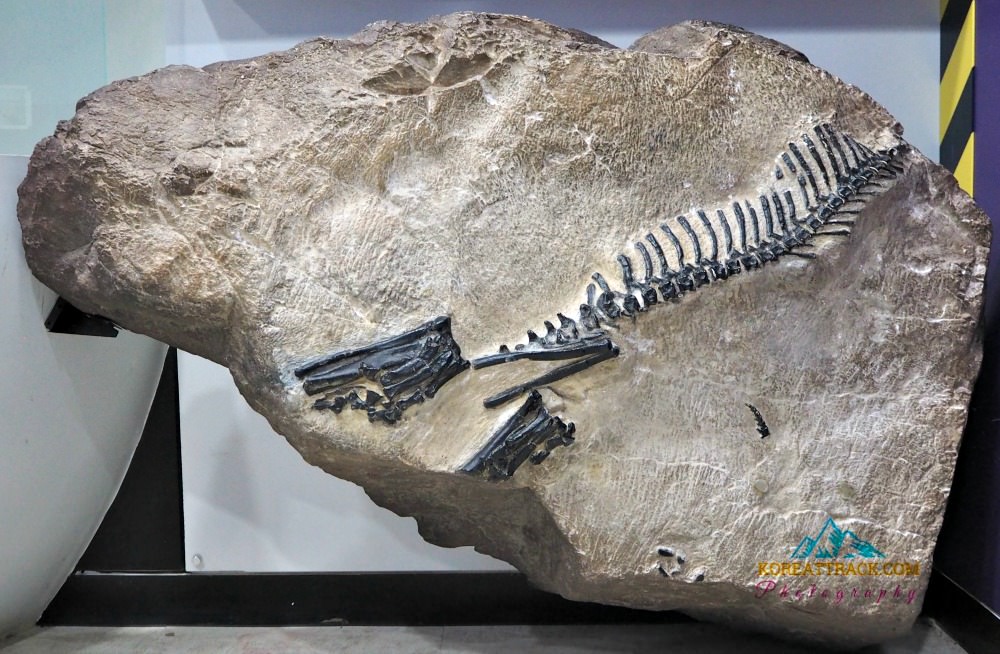 Photo of a fossilized dinosaur at the Visitor Center

I heard about the Hwaseong fossilized dinosaur eggs site last year. Although Korea is not the renown part of the world to discover dinosaur fossils, recent discoveries have proven that dinosaurs existed here millions of years ago.

Finally, yesterday, I headed towards Gyeonggi Province, not far from my home, to see for myself the fossils.

I learned that there are no big discoveries yet, except for the fossilized eggs.

However, the Hwaseong fossilized dinosaur eggs site has contributed so much to Korea's further studies and knowledge of these ancient creatures.

To educate people more about the existence of fossils and their environment, the Korean government officially designated that area as a national treasure. 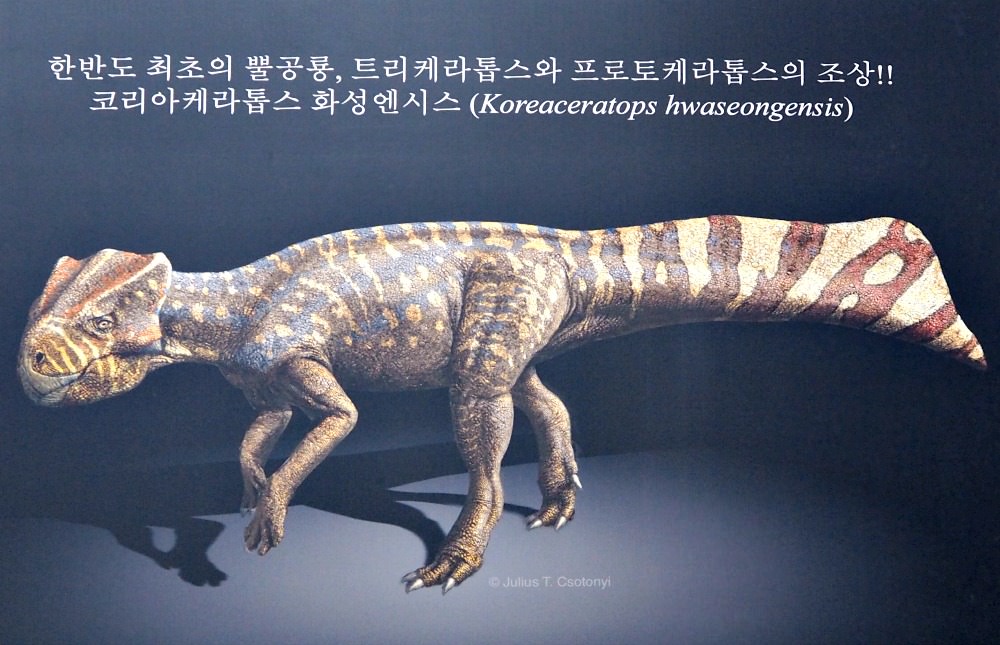 Koreaceratops Hwaseongensis Dinosaur is one of the fossils that roamed in the area millions of years ago. Photo was taken at the Visitor Center

The dinosaur eggs site was discovered on Sihwaho Lake in Hwaseong City. The area is on an island in the tidal plain south of the lake.

The area is topographically low and surrounded by mountains. This terrain is called the Namyang Basin. Near the edge of the basin, one can find alluvial fans with gravel and sand.

Along the basin, streams and rivers flow on the plain where many horned dinosaurs are believed to have lived, such as Koreaceratops Hwaseongensis dinosaur.

The dinosaur eggs, discovered in seven areas, were found as they surfaced when the seawater was blocked during the land reclamation activities for urban development. 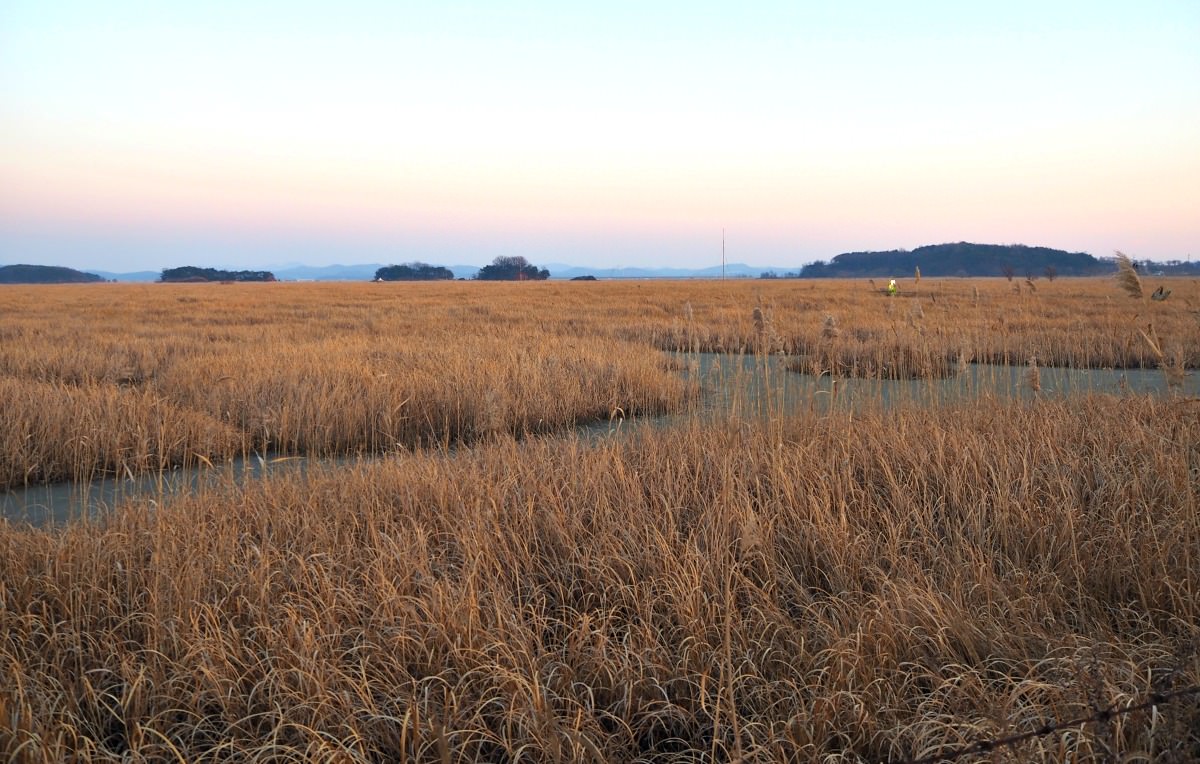 This is the basin and wetland where the fossilized dinosaur nests and eggs are located.

They (somebody) discovered nesting areas on the sedimentary layer eggs of dinosaurs. Of course, studies were done to prove that they are genuinely dinosaur eggs!

The sedimentary layers were formed during the Cretaceous Period of the Mesozoic Era. That is around 83 to 85 million years ago!

The eggs discovered were in around the twenty nests. Each nest is about 50 to 60 centimeters in diameter.

There are 130 dinosaur eggs in total, which range from 11 to 14 centimeters in size. There are six to seven sites where the nests are located. 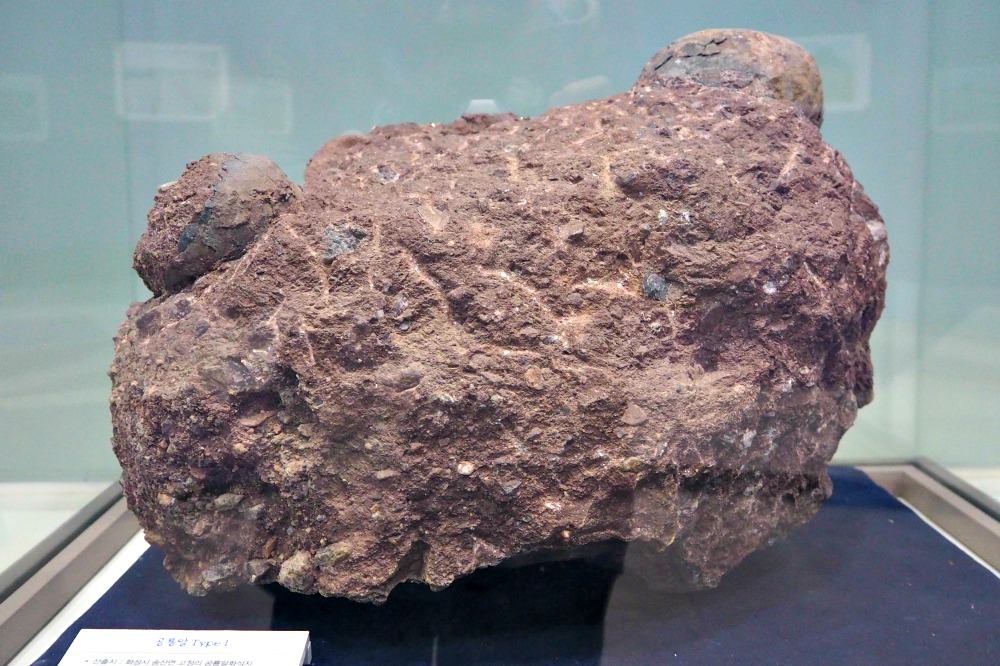 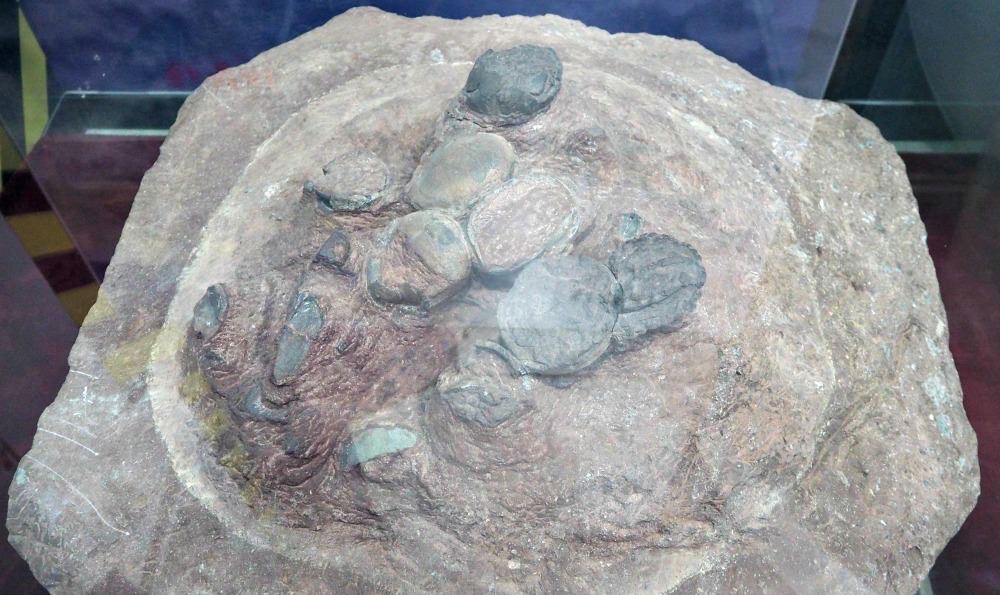 One of the two exhibits of sample fossilized dinosaur eggs found in the area. You can see more of such fossils in the field

Most of the eggs are oval-shaped and dark red ones. Experts concluded that these eggs belong to four-legged herbivore dinosaurs and two-legged ones, including the Hadrosaur.

Plant fossils around the fossilized eggs were also found, which say something about the vegetation in the environment millions of years ago.

No doubt that more eggs, and probably dinosaur fossils, will be discovered as they surface as investigators continue to study the area.

The in-charge of the Visitor Center told me that there are more nests and eggs in the field that are waiting to be discovered. He looked very excited despite being there for many years now!

Yes, I am excited too! I will come back and explore the area longer as I was late when I arrived.

As a nationally designated area, you will find useful facilities established in the area.

Outside the visitor center, you can park your vehicle at its Parking Lot. A waiting shed and sitting area are also available.

Washrooms (lavatory) are available both inside and outside the visitor center. 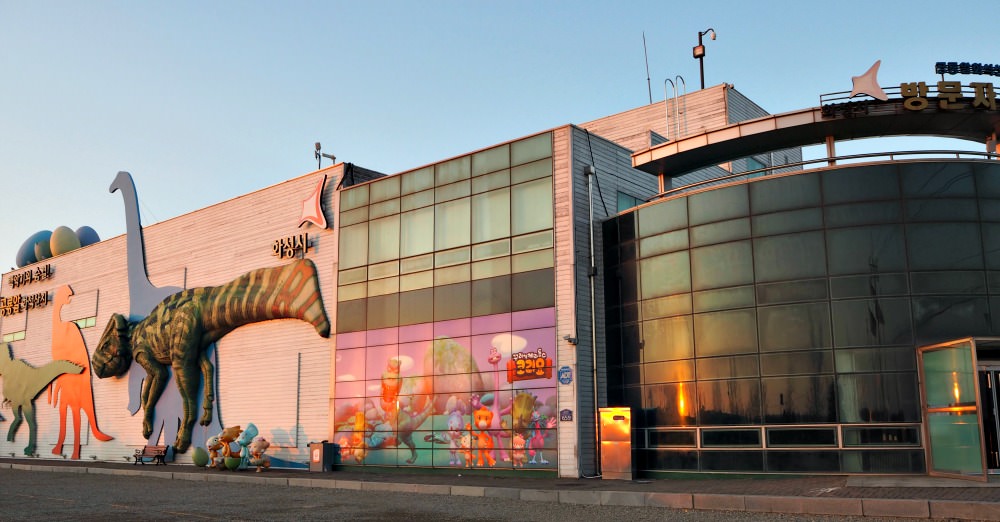 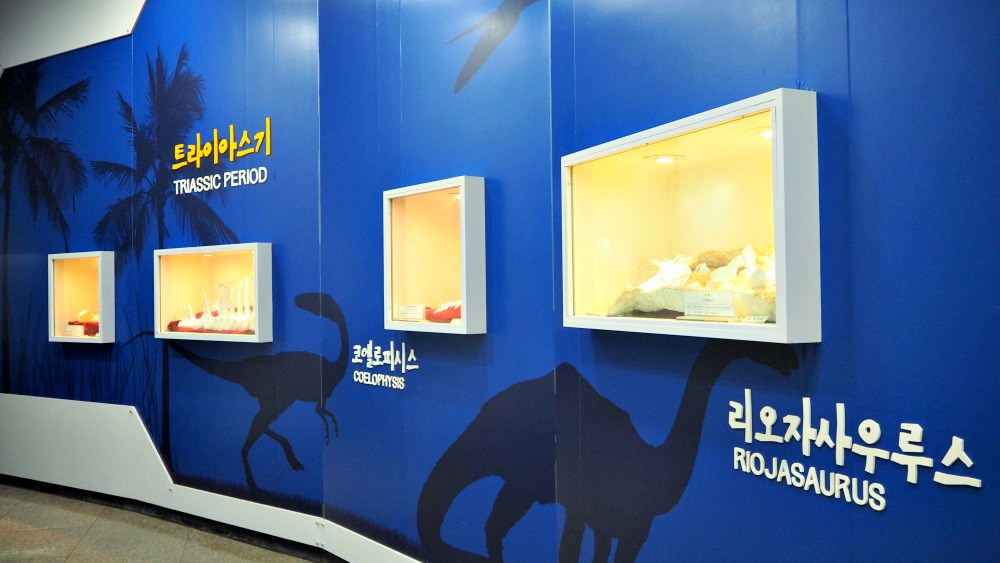 Some exhibits inside the Visitor Center

Dinosaur Eggs Walking Path
The walking path was set up so that visitors don't get soaked in the muddy ground. The path is made up of a wooden path structure, which stretches 1,527 meters far.

Using the path, it will take around an hour to explore the eggs sites. As you can see in the photos, the area is vast with lush tall grass (Silver Grass).

Getting to Suwon City is easier as various modes of transportation can ferry you there.

First, get to Suwon Station (Train and Bus stations). This is the best approach to start your trip to the site.

Yes, that's what I did and so far the most practical and recommendable method, I think. Here's how to get to Suwon Station.

Seoul Subway Line 1
Wherever you are in South Korea, get to Line 1 (Blue Line) and then get off at Suwon Station. The station is nice, spacious and has excellent facilities.

Usually, depending on Line 1, you need to transfer at Guro Station (Line 1) that goes to Byeongjeom or Sinchang destinations. Suwon Station is before the two stations named. 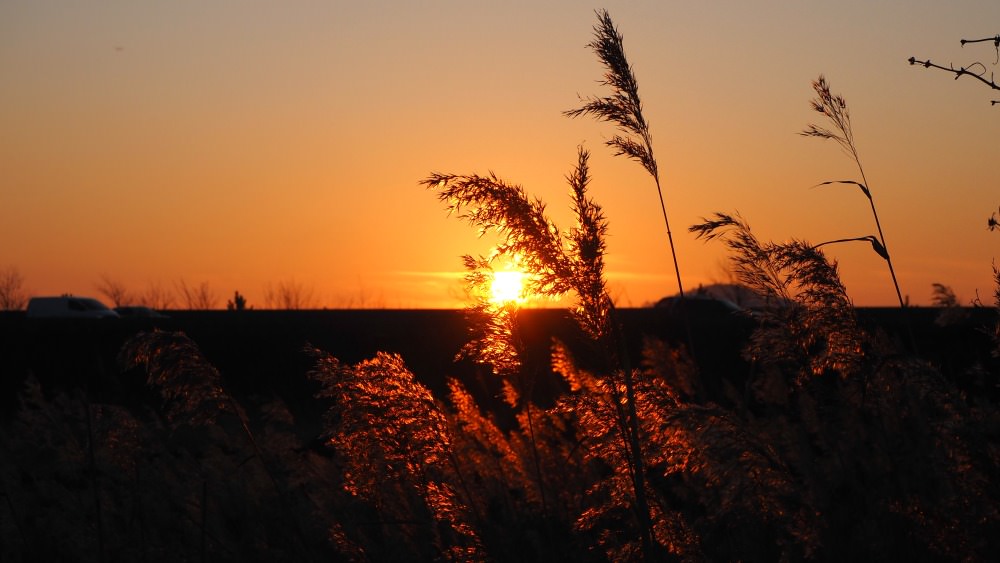 At Suwon Station, you need to go up and towards Exit 3, where you need to cross the road. And here's how you can get your bus...

Go to #6 Bus Stop, where you can take Bus 400. It is a sitting bus that will take around 40 minutes to Sagang Bus Stop (Sagang Market).

At Sagang Stop (Market), take a small maeul Bus 20-2 that goes to Hwaseong Fossilized Dinosaur Eggs Site. It will take around 20 minutes to get there.

A taxi from Sagang Stop (market) also travels to the site. The driver demanded ten thousand Won (10,000KRW) for the fare, which I gratefully have given him! (The small bus is a lot cheaper of course).

If you want to walk, from Sagang Bus Stop (Market) to Hwaseong Dinosaur site is more than 5 kilometers. It is a good hike when you have time!

I hope this is useful. If you have questions about anything, please email me ^^.