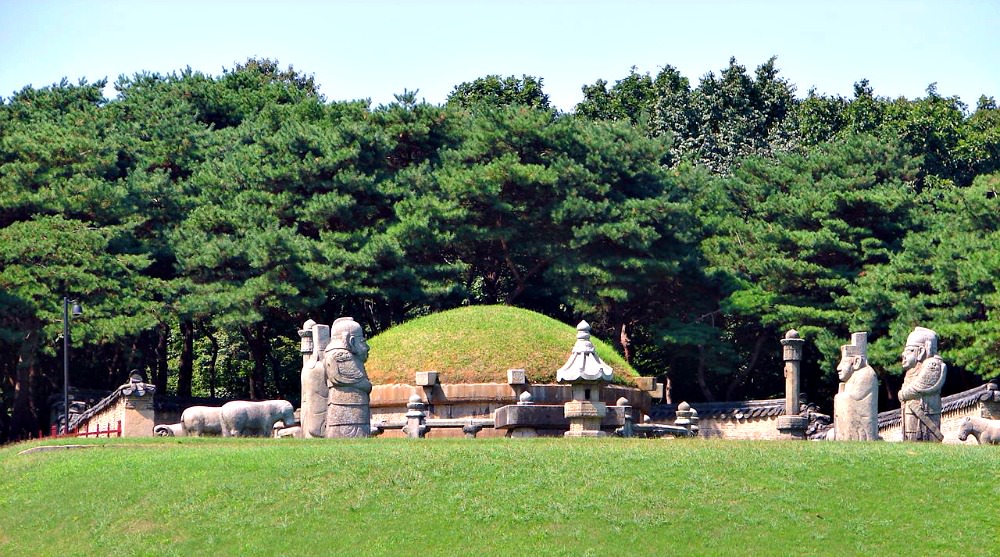 The tomb of King Jeongjong (r 1506-- 44) is one of 3 royal burial areas at Seonjeongneung park. He was the second son of King Seongjong and Queen Jeonghyeon. At this tomb, you can see the complete design-- the gateway and the double path to the pavilion where memorial rites were performed, but you can't go near the burial place.

The Seonjeongneung is the burial premises of two Joseon Dynasty kings and one Joseon queen. The westernmost burial place belongs to King Seongjong (r. 1469-- 1494), the ninth king of the Joseon dynasty.

His very first partner, Queen Han, passed away at age 18 and is buried near Munsan, north of Seoul.

His second wife, Queen Jeonghyeon (貞顯王后, 1462-- 1530), from the Yun household, is buried here because she gave birth to the king's second boy (the future King Jungjong) in 1506.

Queen Jeonghyeon outlived her hubby by 35 years and was buried in a splendid burial place to the east of her husband. Her grave has a stone fence encircling the mound, whereas her other half's tomb, on the left, has a retaining wall.

Statues of civilian and military authorities and their horses stand at attention in front of the tombs.

South of the tombs is a single T-shaped shrine of the type typically discovered at Joseon-era royal burial places. There are also several ancillary structures for saving material utilized in sacrifices.

At this tomb, you can see the full design-- the gateway and the double pathway to the pavilion where memorial rites were offered, but you can't go near the burial place.

The westernmost burial place belongs to King Seongjong (r. 1469-- 1494), the ninth king of the Joseon dynasty. South of the tombs is a single T-shaped shrine of the type typically found at Joseon-era royal burial places.

From your point of departure anywhere with the Seoul Subway line, take the subway that serves Line 2 and Bundang Line.

Since the burial site is surrounded and within the shopping district and accessible area, you can quickly move around and see more exciting places, including Gangnam and Apgujong districts.

Visitors are not allowed in after 8 PM. Only places with lights are accessible during the evening time.

Baby Carriage Rentals service is also available for those who have little ones. This service is useful as the whole area is vast, and kids might find it exhausting after exploring some areas already.

Guided Tour: more than 10 people will be accepted, but a reservation should be made. You may call in advance with this number: 02-568-1291.

The parking fee is 400KRW for every five minutes. Additional 600KRW charges incur for parking over two hours per five minutes.

Thanks for reading through this page. I hope you will enjoy your visit to this area.