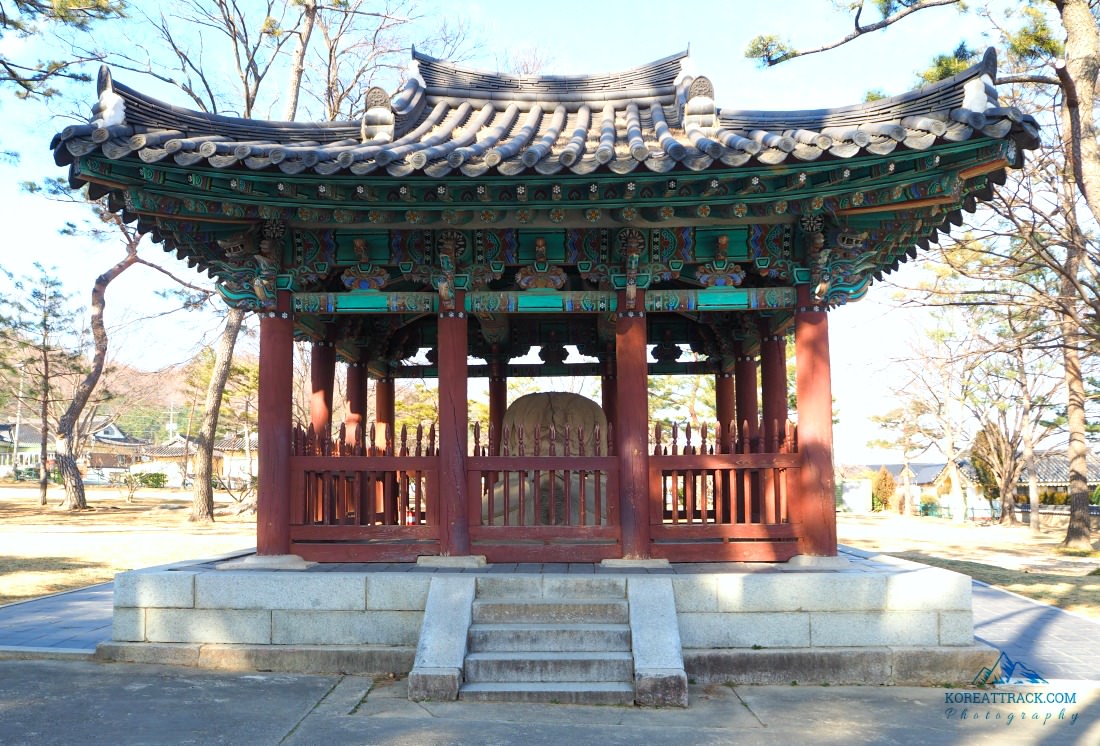 King Muyeol Royal Tomb (무열왕릉) of the Silla period is one of the famous and unique historical attractions in Gyeongju City.

For some reasons, this tomb (and other tombs near it) are set far away (but visible) from the many ancient monuments in Gyeongju.

It is a very accessible site since it is located closer to Gyeongju City. A bus ride from the city will bring you there in around ten minutes.

The tomb area is suitable for groups or families traveling. Any small child can easily stroll from the entrance area up to the last mound tomb above the hill.

The surrounding is very serene. Well-trimmed trees and plants abound. The grass is also well-groomed and maintained.

If you are a hiker, just walk from the city to the tomb area. It only takes around twenty minutes to get there (which I did).

Now, without further ado, here is what you can expect… 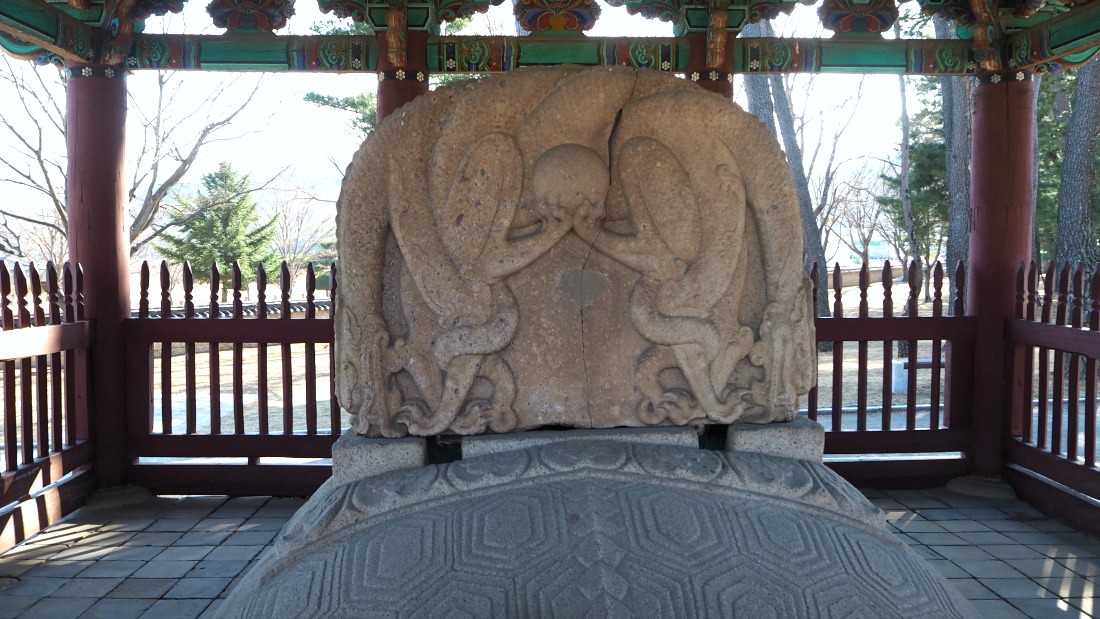 As you enter the main gate, right after buying your entrance ticket (1,000 Won as of this writing), you will immediately notice the first huge mound of King Muyeol’s tomb.

However, you may have, first, drop by at the housed granite stele and tombstone of King Muyeol located close to the main entrance gate.

The tombstone is protected by a traditional Korean hanok structure. The headstone was erected to celebrate the great works of Silla King Taejong Muyeong (654-661, Gim [Kim] Chun-chu).

The tombstone was on the left side of the mound tomb, but no tablet was found except for the skillfully-sculpted-tortoise pedestal and the capstone with carved dragons.

The tortoise seems to symbolize an advancing moving position to represent the progress that Silla had achieved. 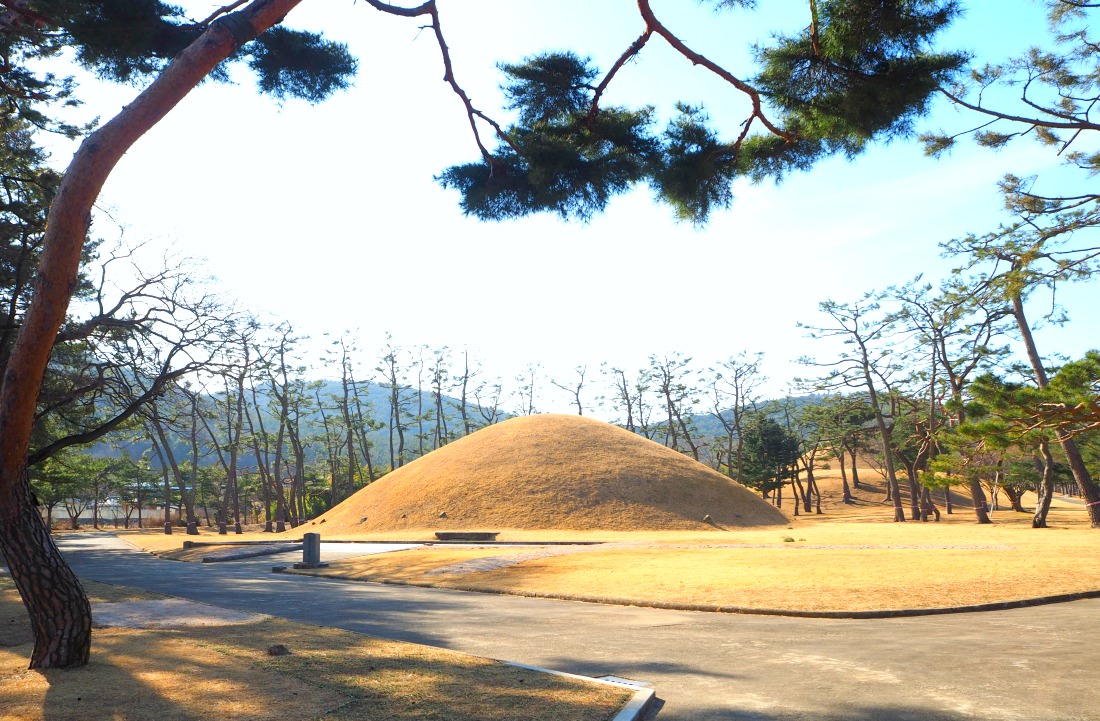 The Royal Tomb of King Muyeol

This tomb was built at the end of the rolling hills stretching from Seondo Mountain that is north-west from Gyeongju City.

FEATURES: The tomb’s circumference is 114 meters with a height of 8.7 meters. Its base was built with stones but mostly covered with soil.

Gim Chun-chu (King Muyeol’s full name) was crowned the first king of the Jingol (name of the royal half-blood people) in the middle of Silla Kingdom period.

One of his notable achievements was establishing diplomatic relationships with Tang China which led to the defeat of the Baekje Kingdom. 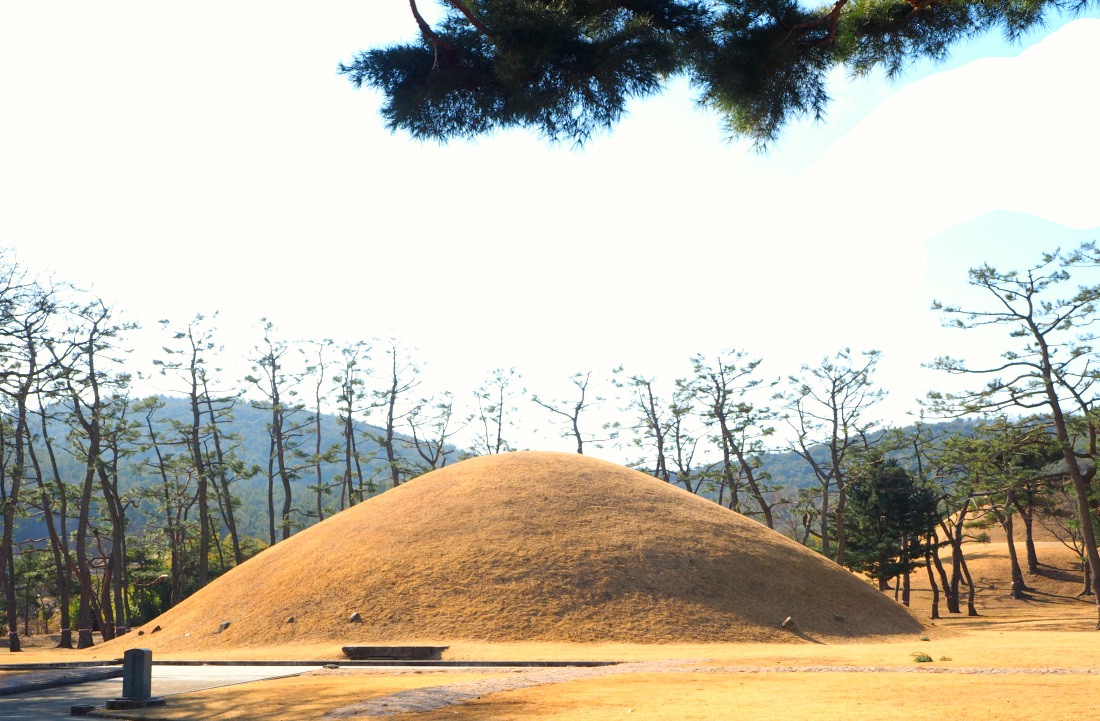 Gim Chun-chu must have initiated the unification of the three kingdoms, but his efforts were instrumental in unifying the kingdoms.

How do we know it is the king’s tomb?

The stele and tortoise mentioned above says something to prove it. The capstone is engraved with eight Chinese characters by Gim In-mun, Muyeol’s second son (see his tomb in the lowest part of this article).

The characters can be translated as “The Monument Sacred to Taejong Muyeoldaewang.” It can be simply understood as King Muyeol’s tomb.

Right behind King Muyeol’s tomb are other mounds. However, they are not specified as to who were buried inside each of them.

Writing on the site’s information signpost states that these mound tomb could belong to the king’s close relatives or even his queen. That is because they are located right behind the king’s tomb which is logical in their thinking. 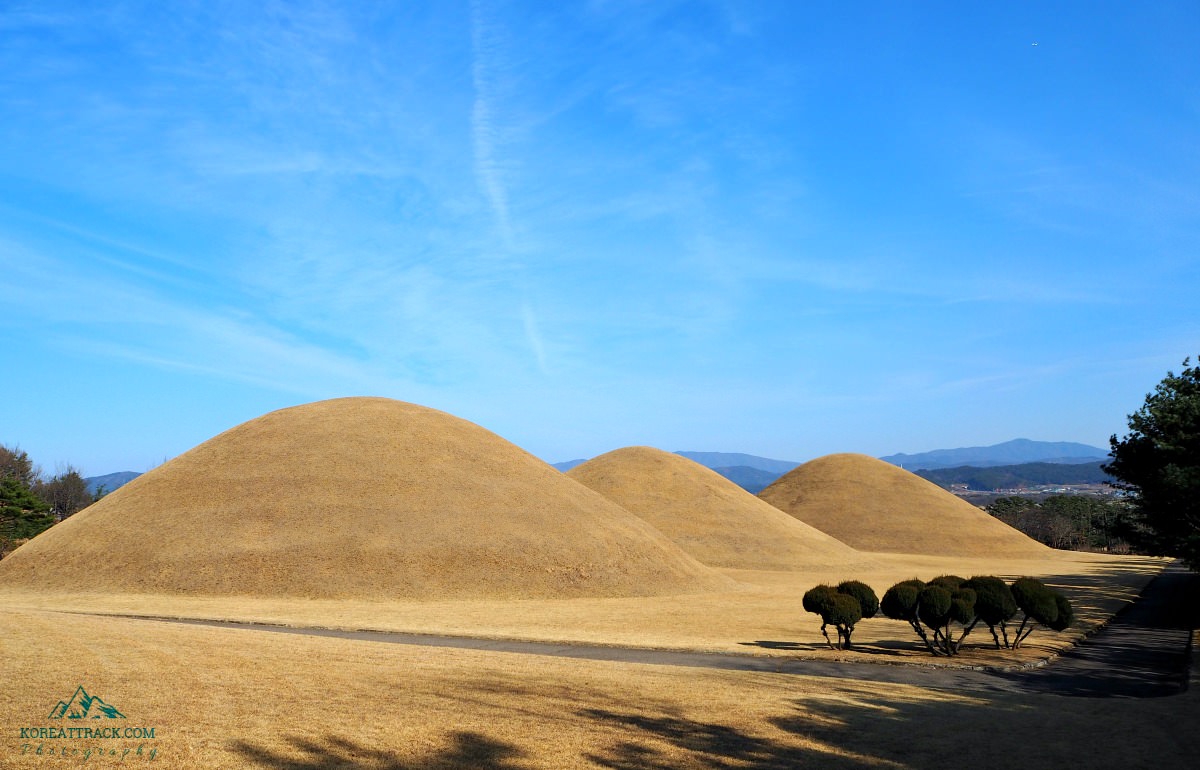 Ancient tombs in Seoak-dong consist of four tombs that are believed to be stone chamber toms with the horizontal entrance. Their heights are 12-18m, and their circumferences of the mount at the bottom are 146-188. They are regarded as those of kings and royal families close to King Muyeol (604-661) on the ground that they are placed just behind the tomb of King Muyeol. 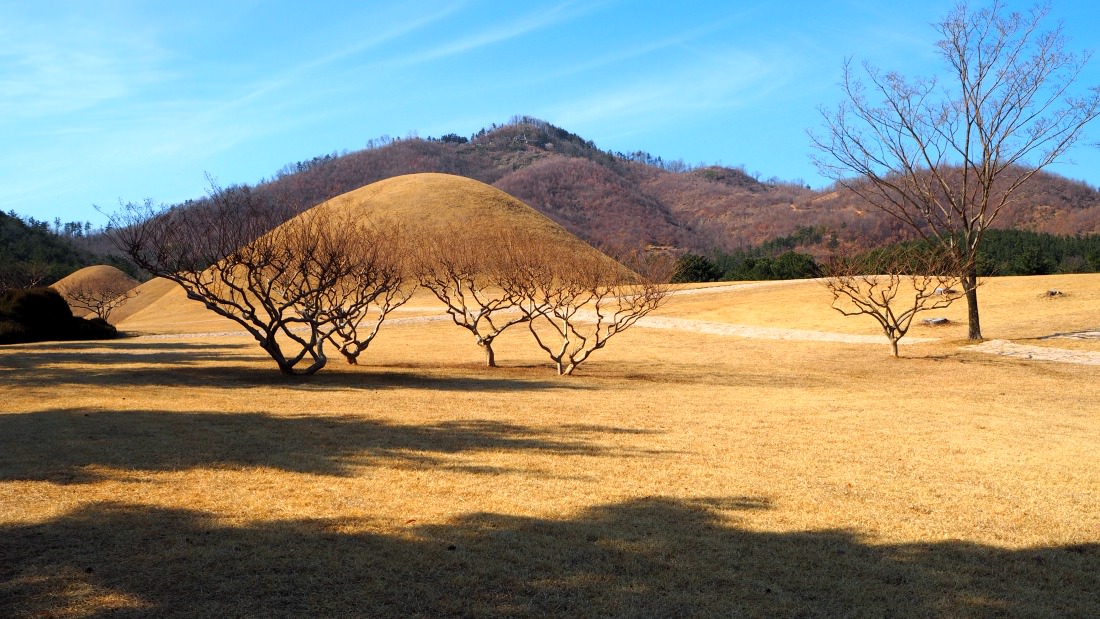 When I felt satisfied exploring the tomb site, I went out and found out from the map that I missed two other tombs. No, I didn’t miss any.

The ticket office in-charge kindly explained that the other tombs are located across the road.

One of the tombs belong to Muyeol’s son Gim In-mun, his second son.

The burial site is also well-maintained, and there is a hanok structure that houses a tortoise but with no stele on its back. It is empty! I guess nobody knows where it is. 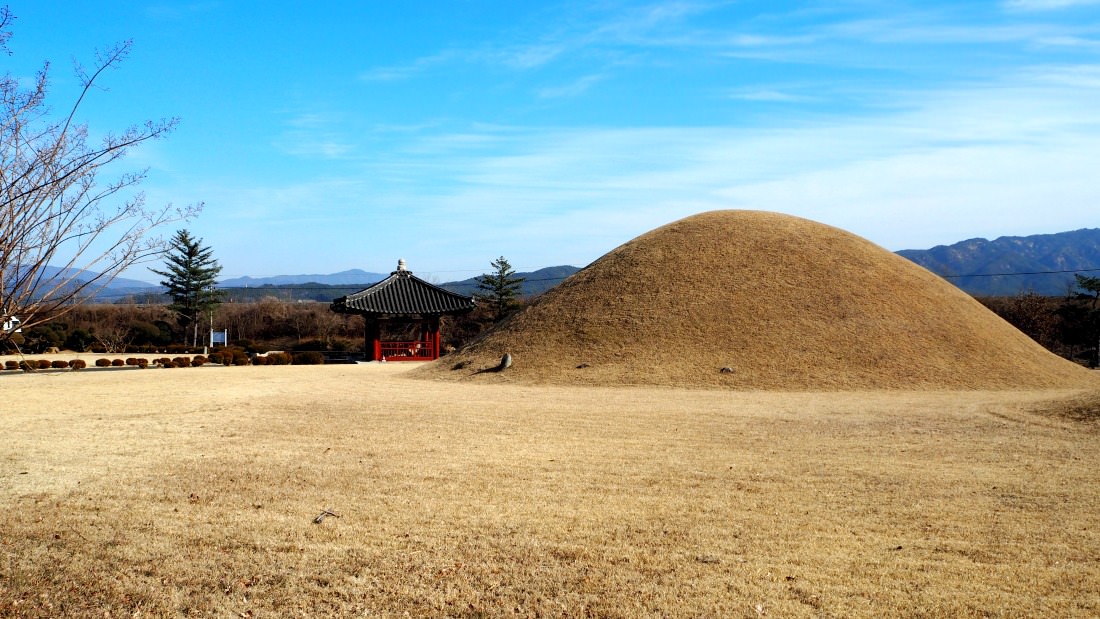 Royal Tomb of Gim Yang
Gim Yang lived in 808-857 and the 9th generation of King Muyeol. His tomb is a typical earthen mound located just across the road where Muyeol was buried.

He was believed to have given exceptional services to the Sill government by holding high official positions under King Sinmun, King Munseong, and Hing Heonan.

Because of this excellent service, he has conferred a high ranking title ‘daegakgan.’ He was (formerly) buried beside King Muyeol's royal tomb. 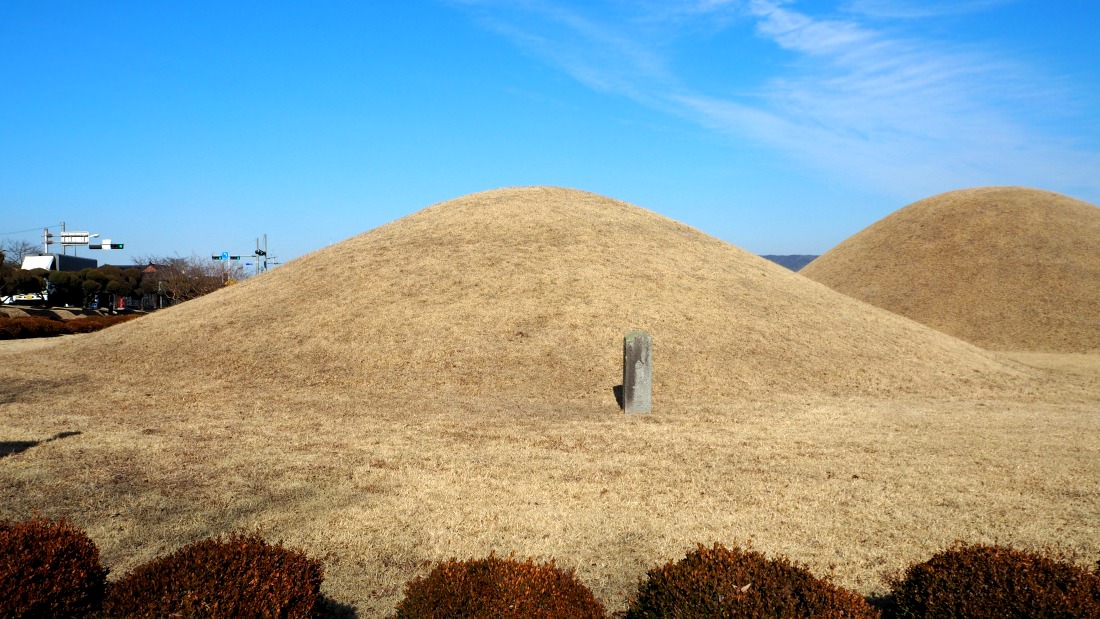 Tomb of Gim Yang, a high-ranking officer of many kings in Gyeongju

Where To Go from Here

From King Muyeol’s tomb, you may continue exploring the mountainside area with its historic sites and relics mostly left behind by the Silla Kingdom.

Alternatively, you can go back to Gyeongju City Proper and explore some of the following popular tourist sites… 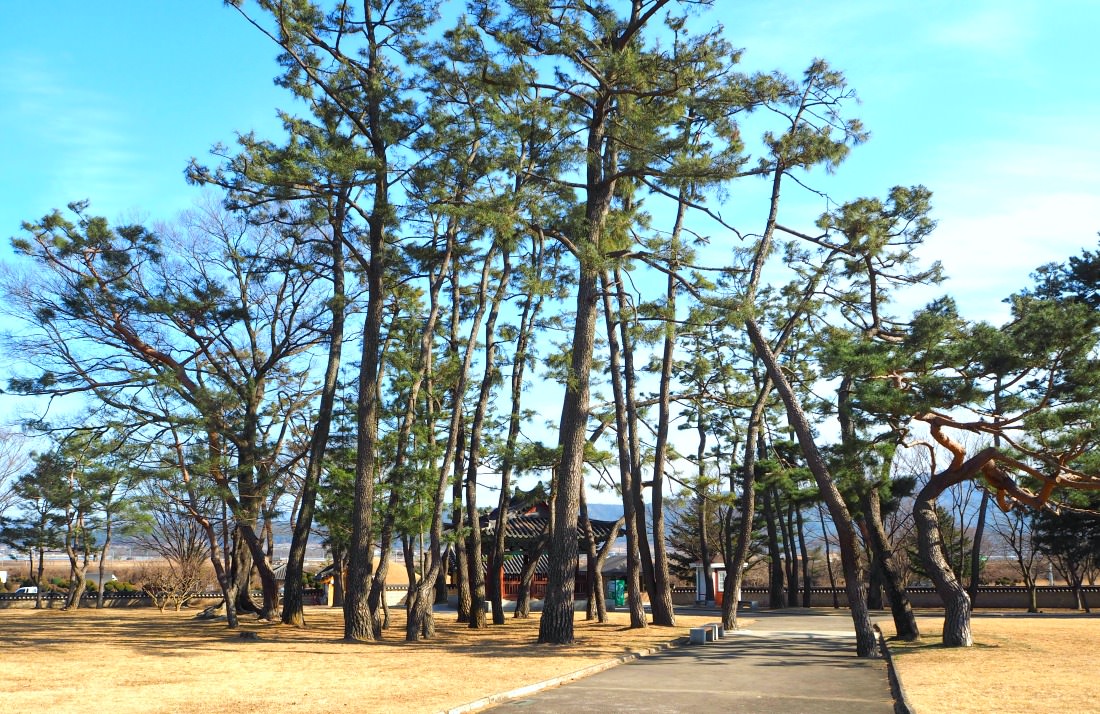 Pine trees inside the tomb area

Traveling to King Muyeol Tomb, Gyeongju City
The much quicker way is to take a taxi, especially if you are with a friend(s).
There are also buses that go straight in that direction from the city proper.

But as I mentioned above, the tomb is very visible from the city and you would not get lost if you walk towards that direction (only one road!)

Thanks for reading through this page.
Enjoy your travels!