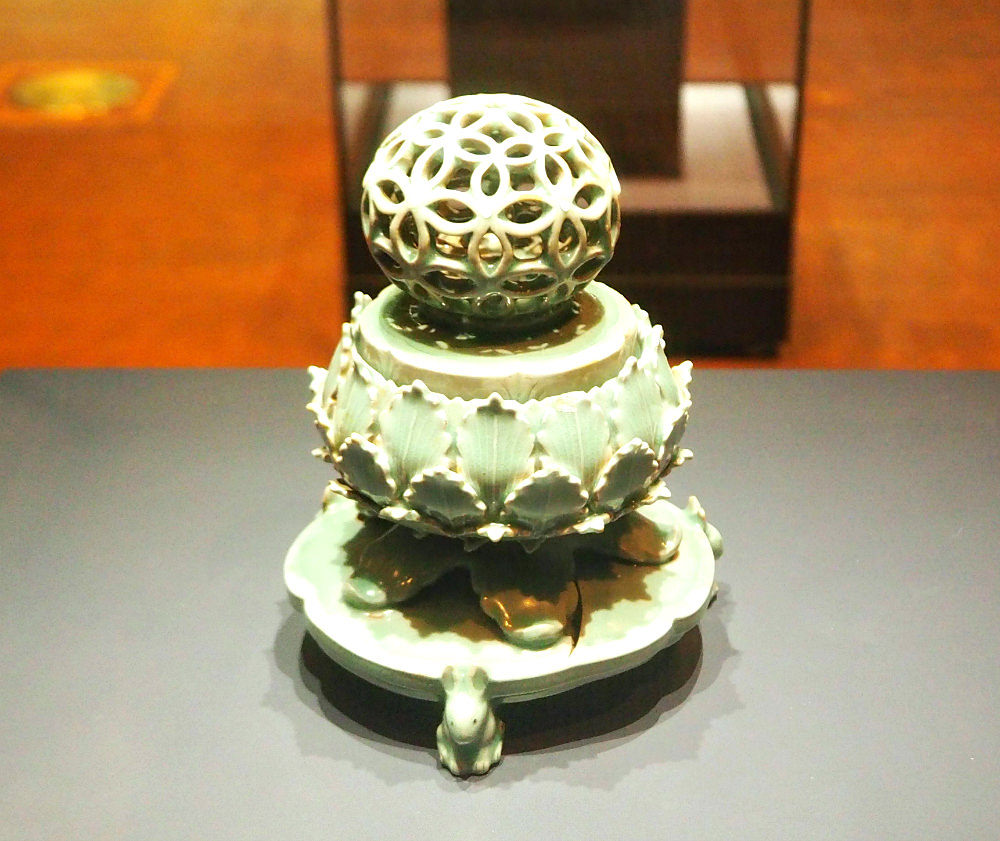 Ancient Korean Ceramic Arts
The ancient Korean ceramics are filled with arts, most of which are based on the natural environment of that period. In this article, I am presenting the photos of ceramics that date back to the 12-13th Century of the Goryeo Dynasty period.

Without further adieu, here we go...

This incense burner shows that its lid is embellished with a sculptured figure, with holes to allow the smoke to flow out freely. The shape of the burner was modeled after metalware of the Tang Dynasty. Fragments of a similar celadon incense burner were excavated from a kiln site in Henan, China, the area which created such wares during the Northern Song dynasty.

Korean Ceramic Arts & Culture
It was my second visit to the National Museum of Korea when I took the fine celadons and ceramic permanent exhibits.

If you love this sort of art, then you are in the right place. This page will show you the beginnings of Korean celadon and the crafts of the old Korean artisans during the Goryeo Dynasty. Included on this page, of course, are the photographs of the celadon exhibition at the museum.

Ceramic Arts & Culture
It is believed that the invention of porcelain ware is one of the greatest achievements in the history of world ceramics. One can create porcelain, glazed wares by using fire in kilns that can withstand the extreme heat of over 1200 degrees centigrade.

During the early Goryeo Dynasty period (918-1392), the production of porcelain wares in Korea started. Although celadon wares were the most common type of ceramics during the Goryeo period, black-glazed wares and white porcelain wares were also manufactured but in limited editions.

The Chinese styles and techniques initially influenced the Korean celadon. However, the Goryeo artisan eventually discovered their own techniques with distinct and original characteristics. Goryeo celadon of the 12th Century is considered one of the finest and in Korean arts.

The period before the 12th Century is believed to be the developmental stage of Goryeo celadon production. Most of them were basically simple and not decorated.

There were the times when Goryeo craftsmen perfected their style by producing an exquisite jade colour of the glaze, which was called 'bisaek'.

With the refinement of the inlay technique, Goryeo celadon reached its zenith in the 12th Century. 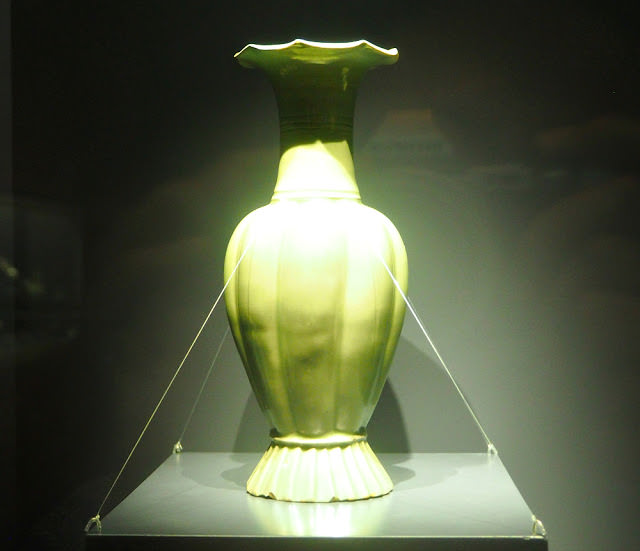 This lobed bottle was reportedly handed down from the tomb of King Injong of Goryeo dynasty in 1122-1146. This design was initially from Chinese bronze liquor bottles. It is produced in the ceramic form in the Northern Song dynasty and was transported to Korea.

The last stage of Goryeo celadon creation dated from 1231 when the nation was attacked by the Mongolian invaders, until the fall of Goryeo dynasty in 1392.

The constant invasions by the Mongols and the Japanese raiders made the Goryeo ceramic craftsmen of Gangjin moved to safety, which opens regional kilns and spread their techniques.

Due to these events, ordinary people around the nation were able to use celadon wares for the first time. 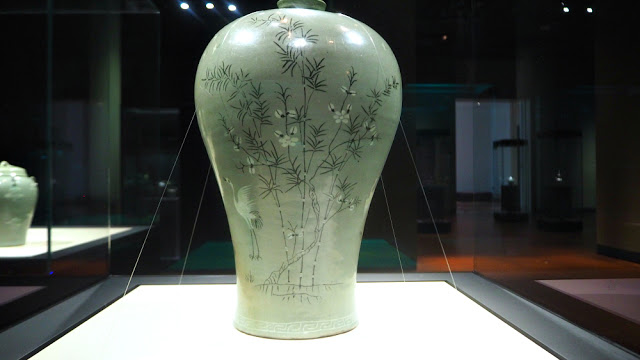 The Vase features a calm and elegant atmosphere, large composition, and harmony between delicately inlaid patterns. Celadon with such exquisite mosaic patterns and spacious composition are mainly excavated from celadon kiln sites in Yucheon-ri, Buan-gun, Korea. 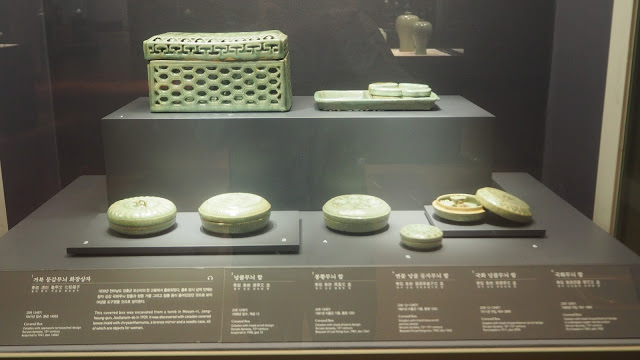 The box was found in a tomb in Mosan-ri, Jangheung-gun, Jeollanamdo, in 1939. It was with celadon covered boxes inlaid with chrysanthemums, a bronze mirror, and a needle case, which are obviously items for women before and today. 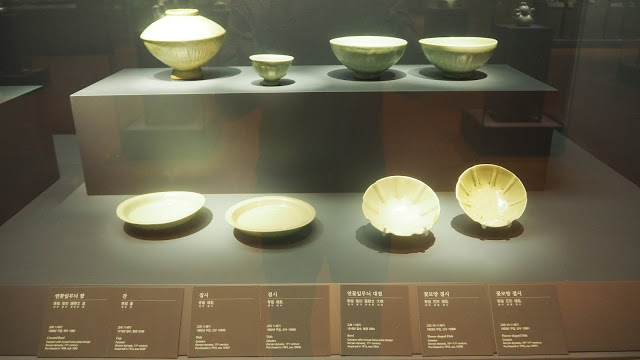 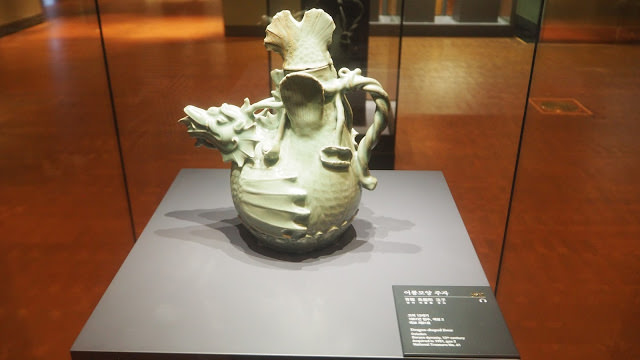 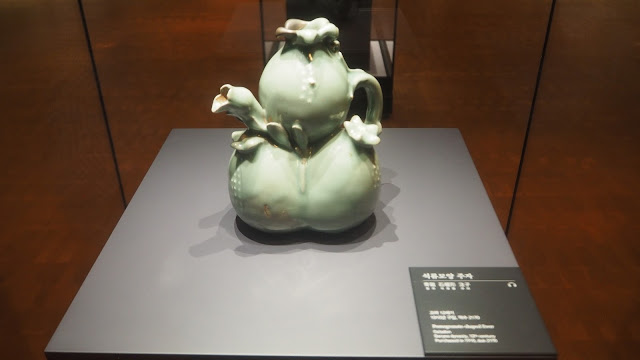 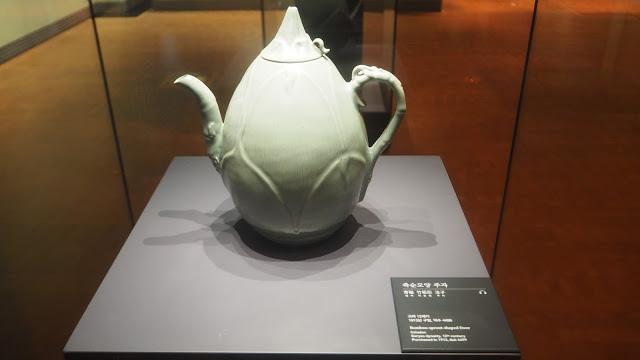 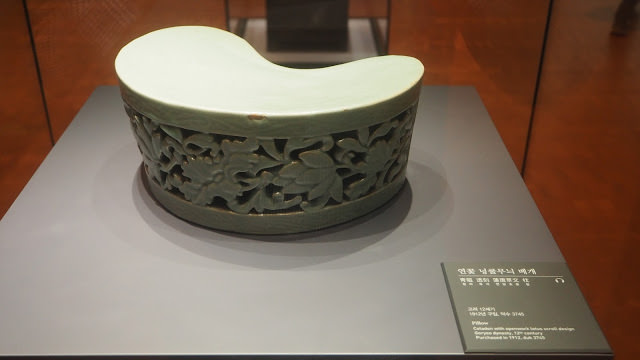 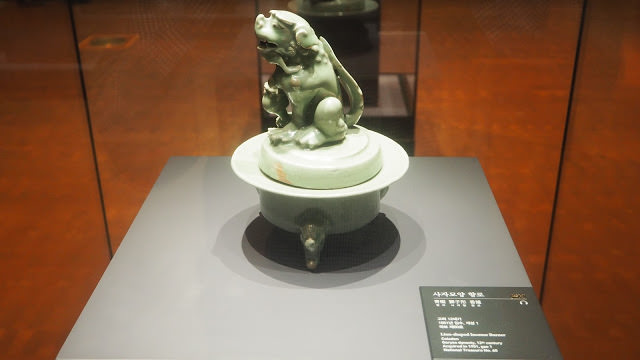 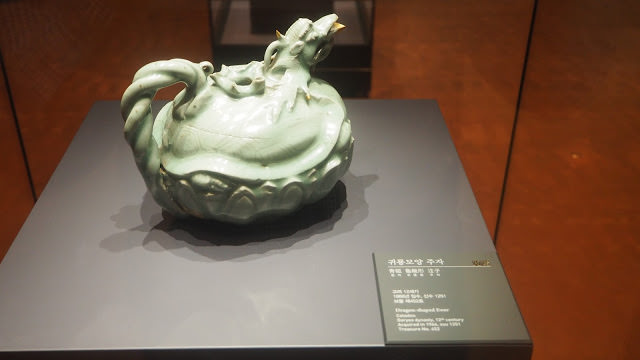 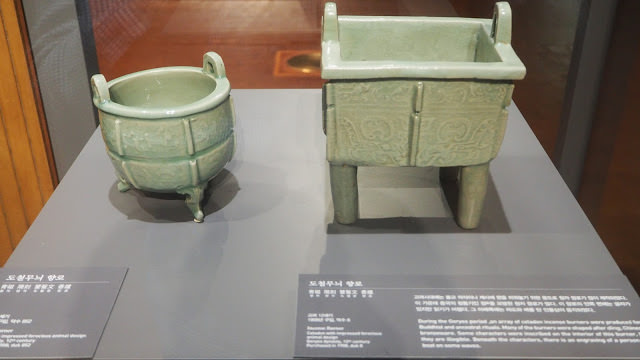 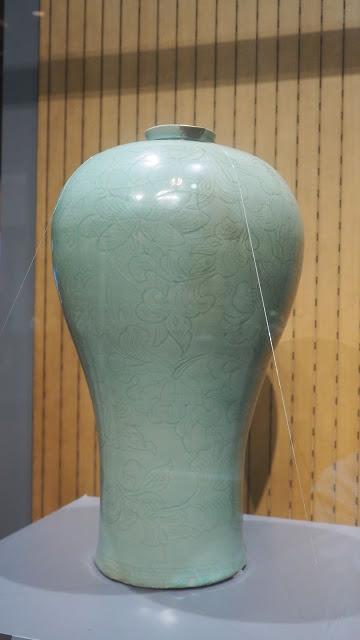 This Vase is with a wide upper body that curves to become more narrow towards the foot, which is called maebyeong from the Chinese term 'meiping' or plum vase. The intricate feminine shape is made during the golden age of Goryeo celadon, which exemplifies the beautiful curves of Goryeo celadon. 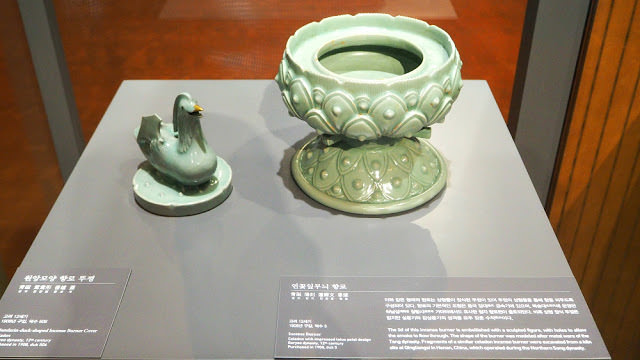 This incense burner shows that its lid is embellished with a sculptured figure, with holes to allow the smoke to flow out freely. The shape of the burner was modeled after metal-ware of the Tang Dynasty. Fragments of a similar celadon incense burner were excavated from a kiln site in Henan, China, the area which created such wares during the Northern Song dynasty. 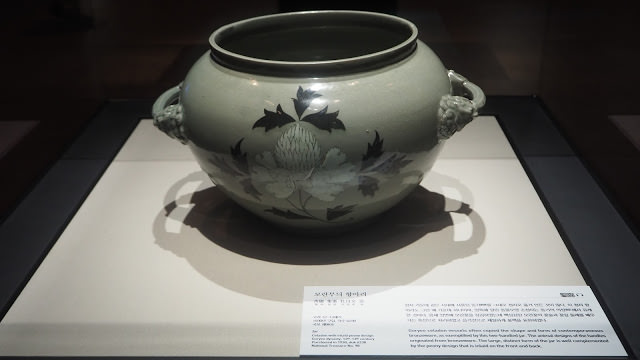 Goryeo celadon vessels often copied the shape and form of contemporary bronzeware, as exemplified by this two-handled jar. The animal designs of the handles originated from bronzeware. The large, distinct type of the jar is well complemented by the peony design that is inlaid on the front and back. 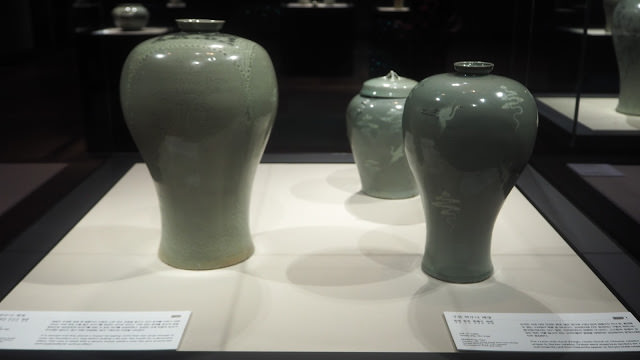 The crane-and-cloud design, rarely found on Chinese celadon, was unique to Goryeo celadon. Cranes were auspicious symbols of nobility and longevity, and thus frequently appear on Goryeo inlaid celadons. 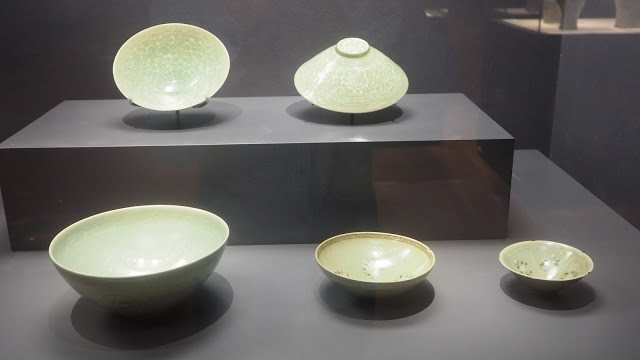 The bowl is considered as Korea's oldest surviving inlay celadon with approximately made during the 13th year (1159) of King Uijong of the Goryeo Dynasty. The dish is priceless as an artifact for studying the development of the inlay technique. 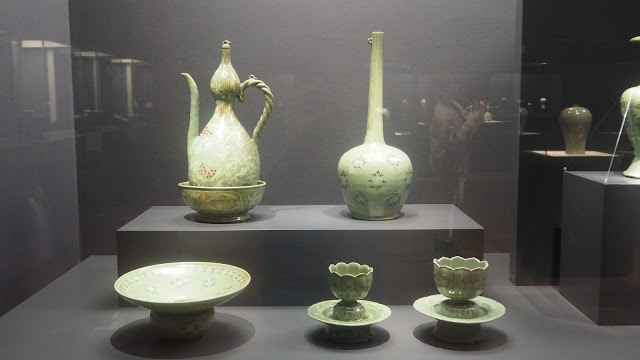 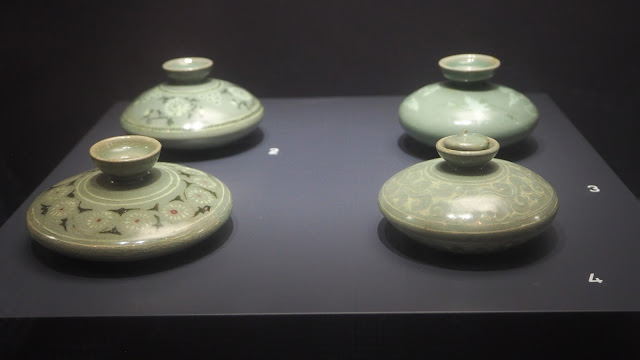 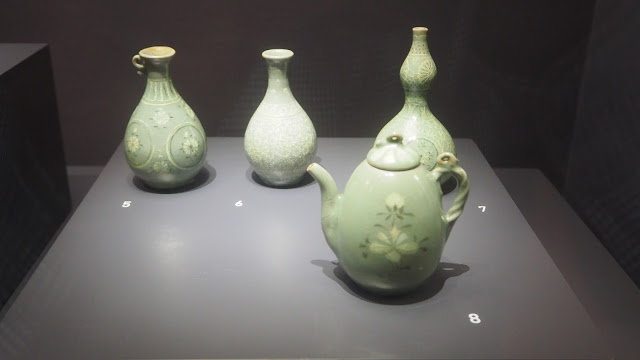 The curved lines of this ewer are unique to Goryeo celadon. Its beauty is further enhanced by the romantic, tranquil waterscape, which was a favored design of the royalty and aristocracy of Goryeo. 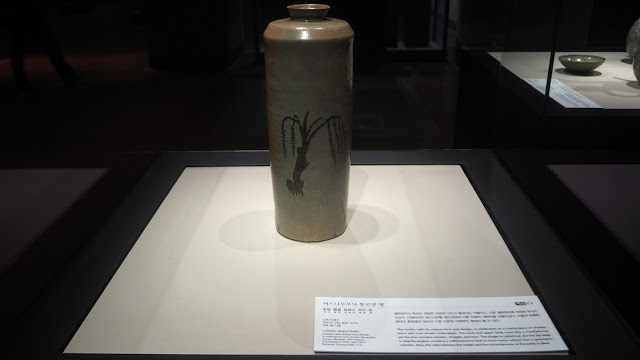 This bottle, with unique design and shape, is celebrated as a masterpiece of celadon ware with iron-brown underglaze. The neck and upper body resemble a maebyeong, yet the line remains slender, straight, and trim. It is cylindrical in shape, but the top edge is slightly tilted, creating a softened form that is more refined than a geometric cylinder. 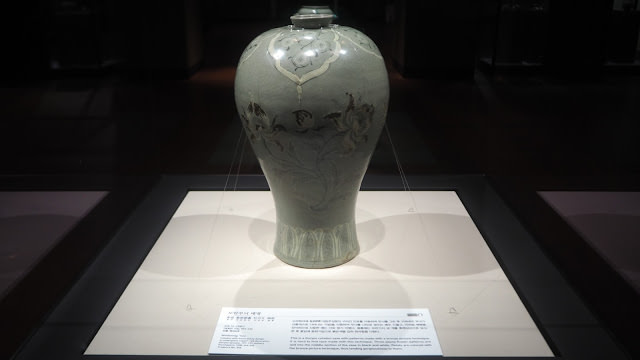 Many thanks for visiting this page. I hope you enjoyed it, and please share it if you like.

Getting To the National Museum of Korea

If you want to see the ceramics in person, given that you have the opportunity, you can visit the National Museum of Korea, which is located in the capital city--Seoul.

Please, go to the link above to find a detailed description of how to go to the museum. I hope this helps.

Thanks, and drop by again here.