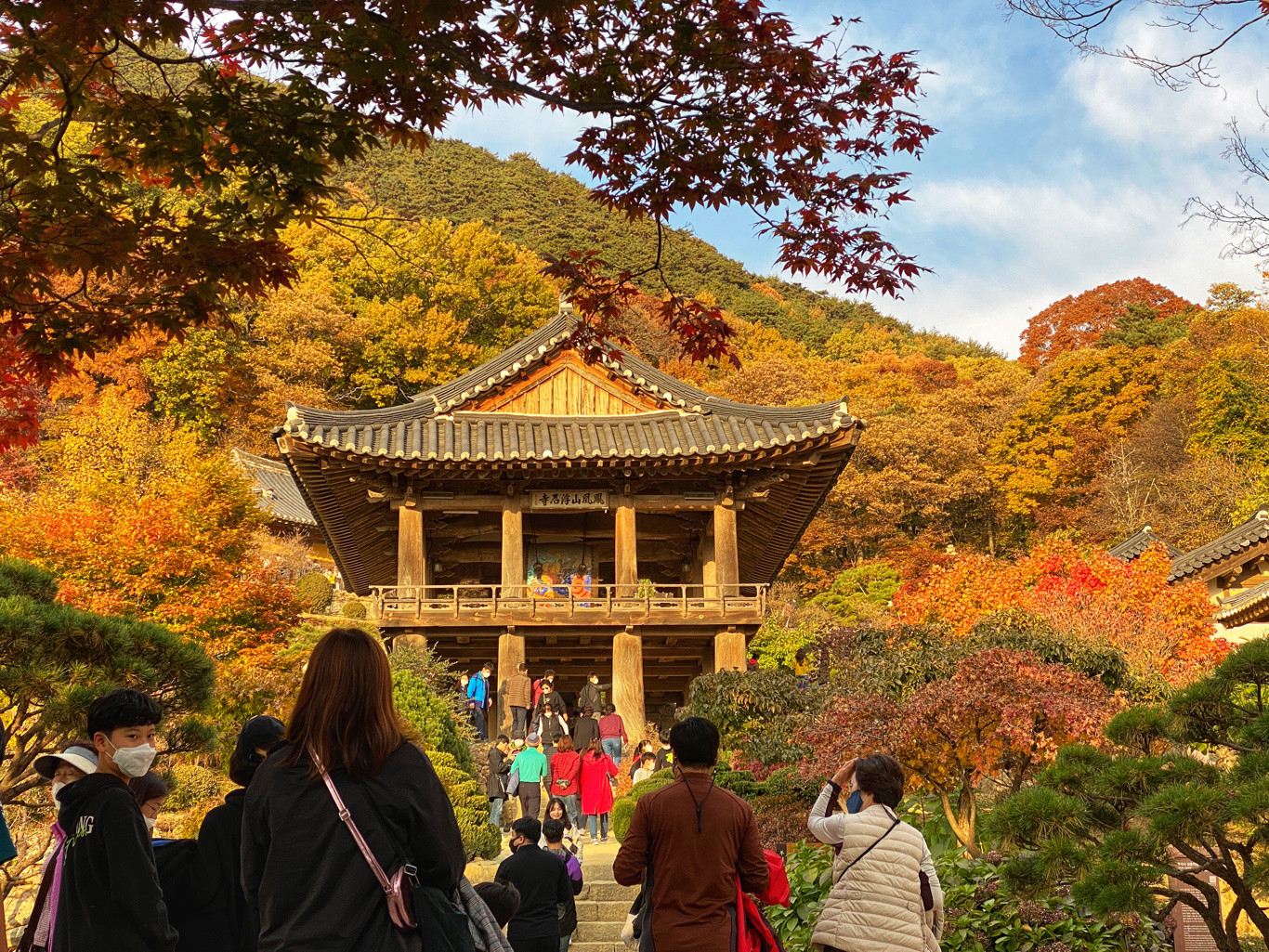 Yeongju City is a serene city located in the northern part of Gyeongsangbuk-do (North Gyeongsang Province).  Its flat valleys are great for farming, while the Sobaeksan National Park boasts diverse nature and ancient temples.

I was not sure what Yeongju was famous for until I explored the place and discovered that they have something which I really love: injeolmi tteok (glutinous rice cake), apples, insam (ginseng), and gogeuma (sweet potatoes).

The population is about 104,000 as of April 2020 and continues to decline. Yeongju sits in the eastern part of Bonghwa-gun, Andong-si in the south, Yecheon-gun in the western region, and Danyang-gun in Chungcheongbuk-do, and Yeongwol-gun in Gangwon-do, bordered by Maguryeong in the north.

At Yeongju Station, the center of rail lines in the northern region of Gyeongbuk, the Jungang Line, Yeongdong Line, and Gyeongbuk Line intersect.

Yeongju City is considered one of 20 small and medium-sized cities nationwide with a declining population in 2017.

According to the Korea Institute for Land Research, the population reduction rate compared to the peak in 2015 was 37%, and the vacant housing rate was 9%.

During the Unified Silla period, the administrative district looked toward Gangwon-do rather than Gyeongsangbuk-do (Sangju).

In the Unified Silla, the three Sakju/Hanju/Myeongju areas were considered the original Goguryeo area, but Yeongju has a mural painting of Sunheung that was influenced by Goguryeo, which is rare in Gyeongsang-do.

Yeongju became Gangju during the Goryeo Dynasty era, and from that time on, it belonged to Gyeongsang-do. Initially, it was Yeongcheon-gun (榮川郡).

The topography is rough in the north where Sobaeksan Mountain is located. But the central and southern parts are flat with eroded hills and less high mountains.

Like other Gyeongbuk regions, there are as many orchards and rice fields. There are a lot of apple farms, especially on rural roadsides.  Apples in this region are becoming famous.  The main production areas of apples are from southern Gyeongbuk, such as Daegu Metropolitan City, to northern Gyeongbuk due to the warming climate.

It seems that even this will soon go up to Gangwon-do, Gyeonggi-do, and Hwanghae-do. Seedlings already planted in Yeongju are sold to Cheorwon or Yeongwol.

On the other hand, as Gyeongsangbuk-do is famous for its cold heat, the Korean peninsula's unofficial high temperature also came from this region.

However, the temperature is a whopping 46°C, which is a temperature that may only come from midday in the Sahara Desert in Africa.

Naejangcheon, a tributary of the Nakdong River, flows in the southern part of the city.

Yeongju City Travel Destinations
Most are located in the northern part of the city at the foot of Mt. Sobaek. There is Sobaeksan National Park that spans Yeongju-si and Danyang-gun. The mountain is quite rugged.

Andong, the nearby town, is famous, but Yeongju is also a place rich in the nostalgia of traditional culture.

In Sunheung-myeon, there is a hanok village called Seonbichon, and Sosu Seowon, Korea's first private library, is located here. It was here that they filmed the famous drama, Two Days and One Night.

Buseoksa is a cultural property of the Goryeo Dynasty, along with Muryangsujeon. Unlike the lesser-quality Goryeo Buddha, which emphasizes the local color and is slightly inferior in proportional beauty to the human body, it is evaluated as a Buddha with balanced beauty inheriting the Silla Buddha style. 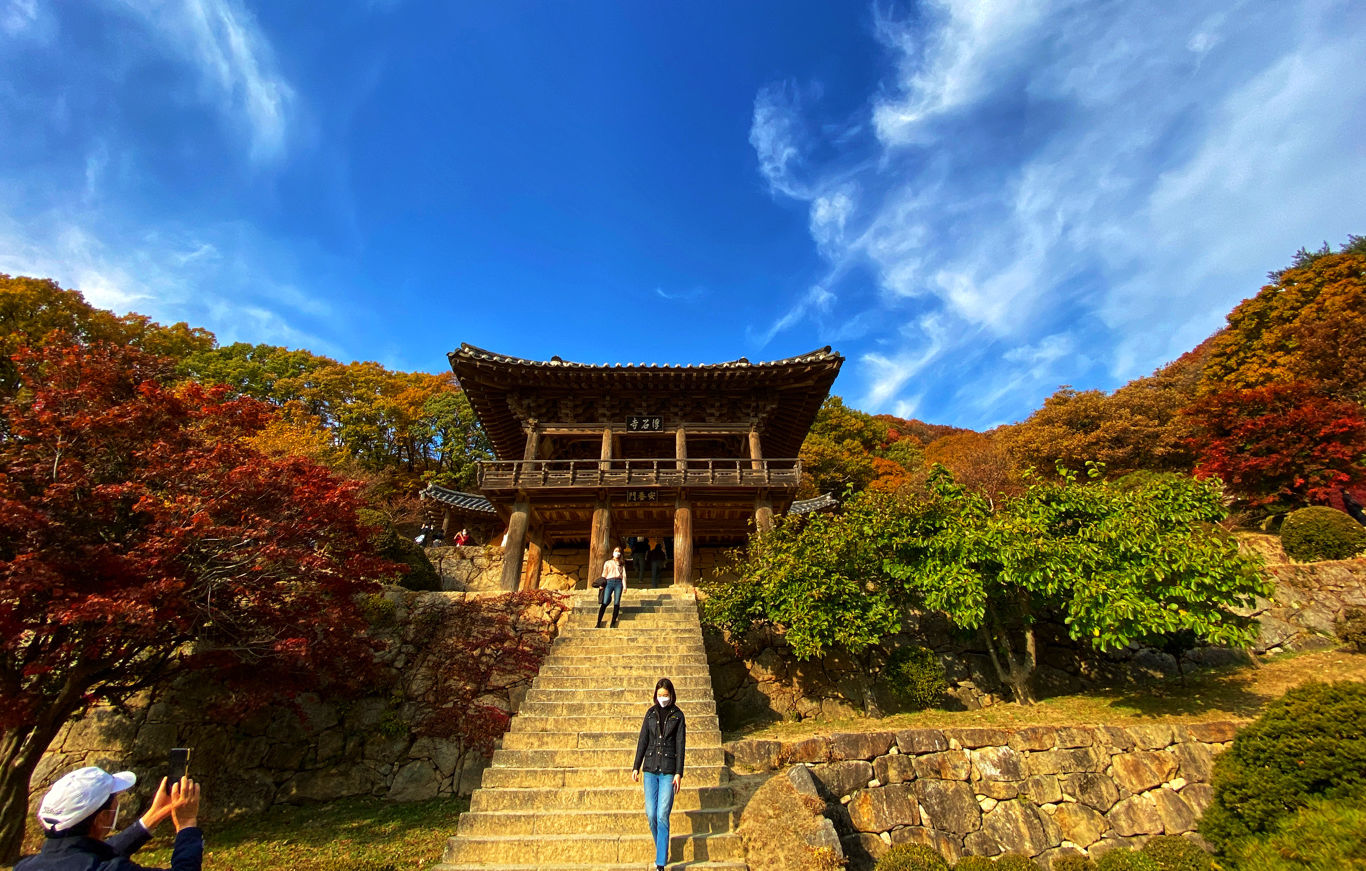 A view of Buseoksa Temple's one entrance gate

In addition, in front of Buseoksa Temple, there is a wide hilly area in the southern part of Yeongju, boasting a beautiful view with low mountains overlapping.

Punggi ginseng, Yeongju apple, Yeongju-guma bread, Korean beef, Ingyeon, and blanket are famous. In particular, punggi ginseng is so widely known that people do not know the lords but know the punggi.

The Punggi Ginseng Festival is held every year. The seal is a viscose rayon. It is a recycled fiber made from pulp and is pushed by the Punggi-eup side.

In the case of fruits, apples are the mainstream, but peaches for Sunheung-myeon and grapes for Dansan-myeon are also famous. The agricultural product subject to the geographical indication system of Korea is the Yeongju apple.

Most of the famous restaurants are located on the outskirts and thought to be hidden ones. This is because these restaurants, such as mukbap, freshwater maeuntang (spicy soup), duck meat, and chicken feet, cannot be reached by public transportation and are not advertised, making it difficult to know unless you know by word of mouth.

Talking about movie houses, you can find only one movie house. When I told the taxi driver that I was going near a cinema, he asked a strange question: You will not watch a movie, right? Then he added: Because that movie house was closed down. When I asked why he answered that not many people watched the movie there, they would instead go to Andong to watch at the Megabox or CGV moviehouses.

When the Yeongju City Terminal was relocated to a residential site in 2017, the area was redeveloped, and Lotte Cinema with six halls was built in 2019.

Perhaps because of the declining population, there is not much to do at night. Unlike the downtown area in other areas, all the city's shopping districts are closed in the late evening.

Still, the neighborhood of Yukgeori Gyeongbuk College is a university district, so it becomes active at night. It seems to be because it is a new city of its own called Shin Yeong-ju, and the population was concentrated due to the presence of modern apartments.

And as the housing site in Gaheung-dong is developed, people are also crowding there. Tourists and office workers are looking for more housing resources and facilities to accommodate their needs.

If you want to travel and move around quickly, you need to bring your car or rent a vehicle. Otherwise, the buses and taxis are always available to ferry you wherever you want to go.