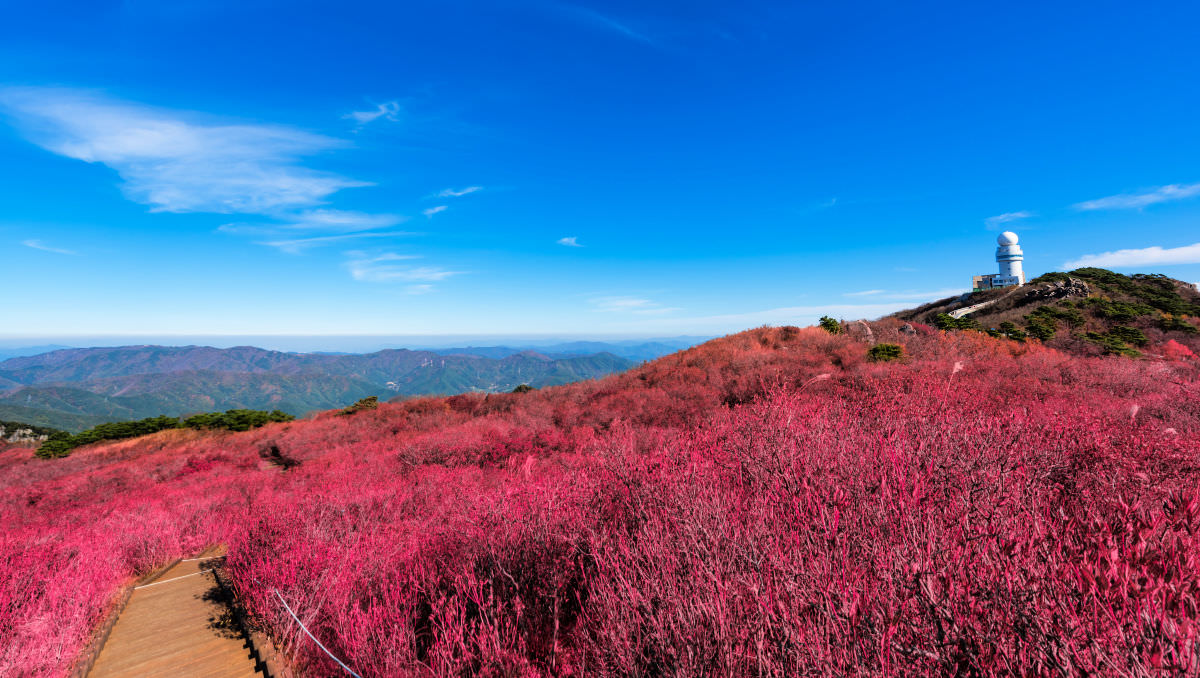 A colorful mountain of Daegu bedecked with reddish plants

Daegu Tourist Attractions article is your brief and comprehensive guide to the most exciting sights, places, and relaxing abode located in this city.

Being under the ancient Korean kingdoms (such as Silla and Joseon dynasty), Daegu has a rich historical background, some of which can still be observed ancient relics at the museums.

Regarding history, you can enjoy visiting Daegu City's museums, mountain fortresses, temples, and such sites.

However, if you intend to see how Daegu looks like today, you need to explore its ecological parks, gardens, nature hiking trails, man-made lakes, river parks, and similar outdoor facilities. (See more below)

Daegu (Korean: 대구, 大邱 means 'huge mountain'), formerly spelled Taegu and officially known as the Daegu Metropolitan City, is a city in South Korea. It is the fourth-largest city after Seoul, Busan, and Incheon. And it is the third-largest city in the country with over 2.5 million citizens.

Daegu and its surrounding North Gyeongsang Province are often referred to as Daegu-Gyeongbuk, with a total population of over 5 million.

Daegu is located in south-eastern Korea, about 80 kilometers from the seacoast, near the Geumho River and its mainstream, Nakdong River in Gyeongsang-do.

The Daegu basin is the central plain of the Yeongnam region. In ancient times, the Daegu area became part of the proto-kingdom Jinhan.

Subsequently, Daegu came under the control of the Silla Kingdom, which unified the Korean Peninsula. During the Joseon Dynasty period, the city was the capital of Gyeongsang-do, among the standard 8 provinces of the nation.

As I mentioned above, you can learn more about the past, which could be very interesting, about Daegu through its numerous museum. In case you decide to visit the city, you might have to remember the museums (or just one or a couple of them)...

Of course, you cannot just explore the museums, but you might need to go out and see the extant relics of Daegu's history. So, you can head to any of the following historical sites to see them and enjoy as well the surroundings and its relaxing atmosphere.

Then, you can also explore the numerous parks. Just pick your favorite type of park, and you will find it. Most of these parks are public and for FREE, but not all! 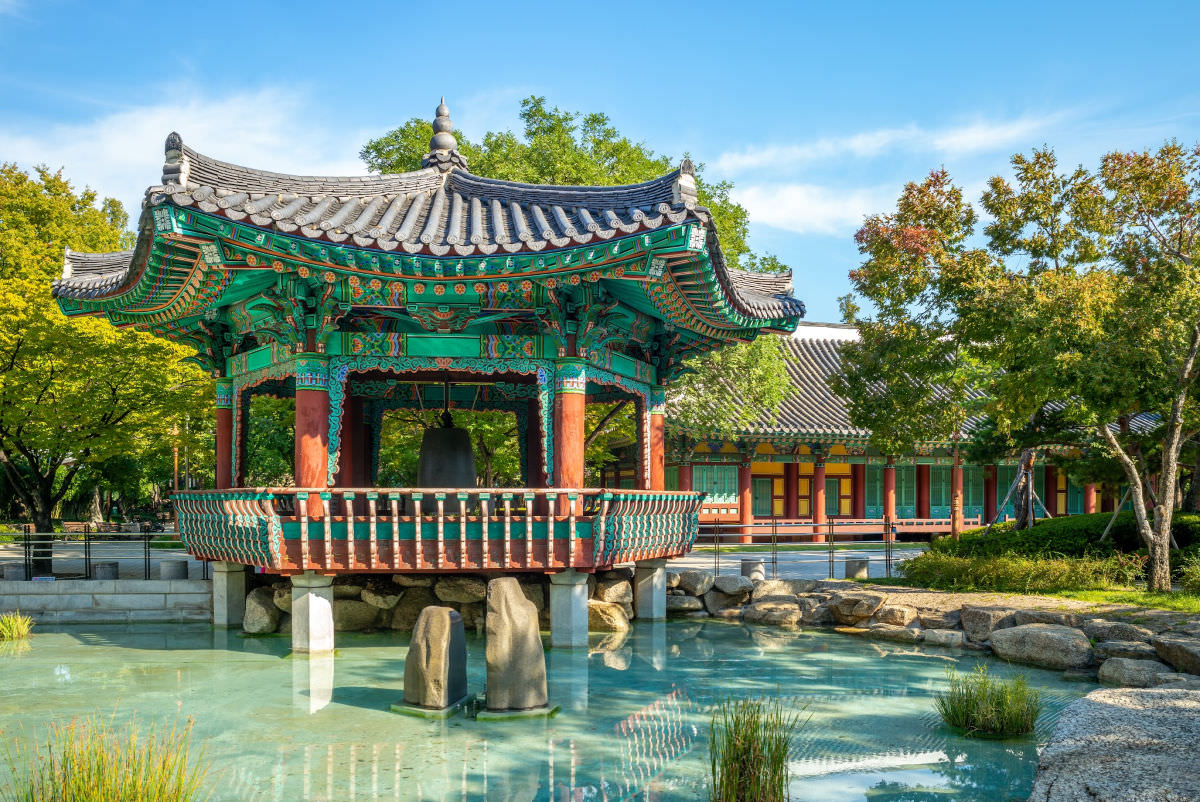 If you want to see how people do things in the market and experience local food, you have got to visit Daegu's market places.

The Arc, 83 Tower, Gyesan Catholic Church, Hill Crest, and more sites and sights. These are most of Daegu tourist attractions named and promoted by locals. However, you can also discover places and sites not yet mentioned here.

Daegu was a financial motor of Korea throughout the 1960s-1980s duration and was notably recognized for its electronics industry. The damp subtropical climate of Daegu is perfect for producing high-quality apples, hence the label, "Apple City".

Daegu is likewise called "Textile City". Textiles used to be the pillar market of the city. With the establishment of the Daegu-Gyeongbuk Free Economic Zone, Daegu is presently concentrating on cultivating fashion and state-of-the-art markets.

Daegu was the host city of the 22nd World Energy Congress, the 2011 World Championships in Athletics, and the 2003 Summer Universiade. Daegu hosted the World Masters Indoor Championships on March 19-- 25, 2017.

Alright, I guess that is enough as an introduction to Daegu tourist attractions and destinations for travelers and visitors. If you are getting interested in visiting Daegu, you can find out more by checking out the way to get there.

Getting to Daegu City

Dongdaegu Station
Daegu is the hub of the Korean inland railway traffic. The central railroad of the nation, Gyeongbu Line, goes through the city. The biggest railway station in the city, Dongdaegu Station, has the second biggest passenger traffic in Korea after Seoul Station.

All types of trains other than KTX depart from Daegu Station. Established at the city center, this Station has an all-new structure with movie theaters, dining establishments, and an outlet store. It has the tenth largest traveler traffic in Korea.

Daegu Metro
The city has a metro system, including two subway lines. Line 1 (red line) crosses the city from northeast to southwest, while Line 2 (green line) crosses from west to east.

Line 3 from northwest to southeast is a raised monorail. All the lines are and will be operated by the Daegu Metropolitan Transit Corporation.

The fare is 1400 won, and 1250 won with a prepaid card. There is a complimentary interchange plan in between the metro and bus within an hour of very first usage for the prepaid card users.

Taking a Bus
There are two types of buses. One is a small bus with fewer sits, thus requiring most passengers to stay standing up for a less rate.

The other type is the Chwaseok (sitting bus), where you have to sit down because it travels the longer route. It requires you to pay a bit more than the other one. But the fares for public transports in Korea are inexpensive, even the taxi cab compared with other countries, such as in Japan or the US.

Traffic is sometimes heavy; nevertheless, the major thoroughfares handle relatively high volumes of traffic without too much trouble.

Thanks for reading Daegu tourist attractions article. I hope you find this useful. Should you have urgent questions, please send me a note, and I'll be glad to answer.