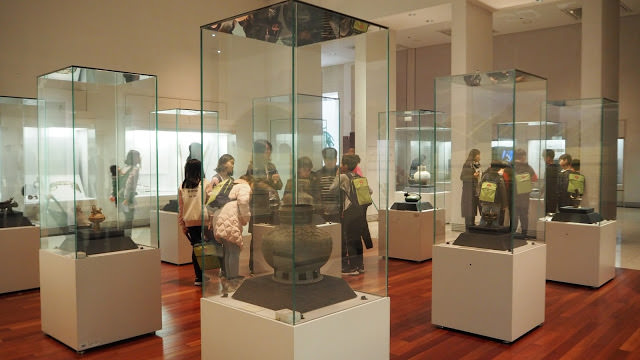 The Three-Kingdoms Period - Silla
The Silla Kingdom article is another exciting period in Korean history. I am proud to introduce to you briefly some of Silla's stories and achievements during its period.

I describe the Silla Kingdom not only in words but also through the photos I took from South Korea's national museum located in Seoul during my visit there.

Silla Kingdom existed from around 57 BC to 935 AD. It dominated the southern and central parts of the old Korean Peninsula.

Silla was among the three, along with Baekje and Goguryeo, that made up the famous Three Kingdoms of Korea.

The Kingdom was founded by Hyeokgyeose of Silla of the Park family. The Silla Dynasty was ruled by Gyeongju Kim clan for 586 years, Miryang Park clan for 232 years, and Wolseong Seok clan form 172 years.

Significant features and achievements of the Silla Kingdom include...

Now, let me describe a bit more about the Kingdom with photos below.

Establishing Silla Kingdom
Silla evolved from Saro, a walled town in present-day Gyeongju. Silla established its ideological and political foundation with the introduction of Buddhism and the administrative code.

Culturally, Silla achieved its own styles, as is evident in the wooden chamber tombs with stone and earthen mounds, its pottery featuring shapely lines, and the gold crowns with unique upright ornaments.

A variety of glassware and other funerary objects of foreign origin attest to the cosmopolitan aspect of Silla culture.

Silla Weaponry
The Silla weapons were excavated so far can be divided into two categories, those for offenses such as socketed spearheads, swords, and arrowheads, and those for the defense such as suits of armor and helmets.

One of the most outstanding relics from this period is a sword with a ring pommel lavishly decorated with gold and silver.

The sword, which has a long socketed blade, is believed to have served as a symbol of its owner's political authority. 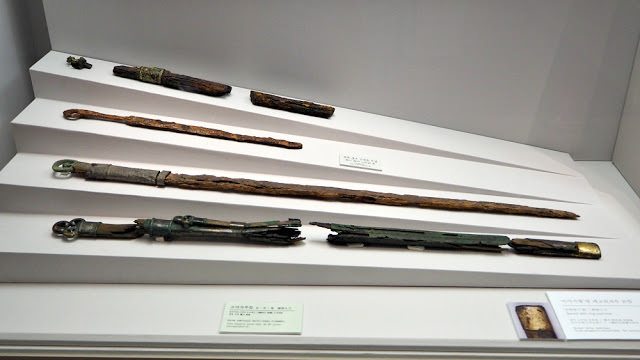 Equipment for the Horse
There were various kinds of weapons and horse equipment excavated from Silla tombs. Weapons include swords, arrowheads, socketed spearheads, armor, and helmets.

Weaponry and pieces of equipment exquisitely decorated with gold or silver attest to the excellence of Silla craftsmanship as well as the social status of the deceased.

Tombs of Silla
The outer coffin tombs with stone and earthen mounds characterize Silla burial practice, by which first the outer coffin was prepared in a pit or on the ground.

The inner coffin and funerary objects were placed into the outer coffin, after which stone pebbles were piled on the sides and top of the coffin, which was then covered with an earthen mound.

The extravagance of the burial itself and the dazzling variety of attendant goods, including gold crowns symbolize the power and wealth of Silla. 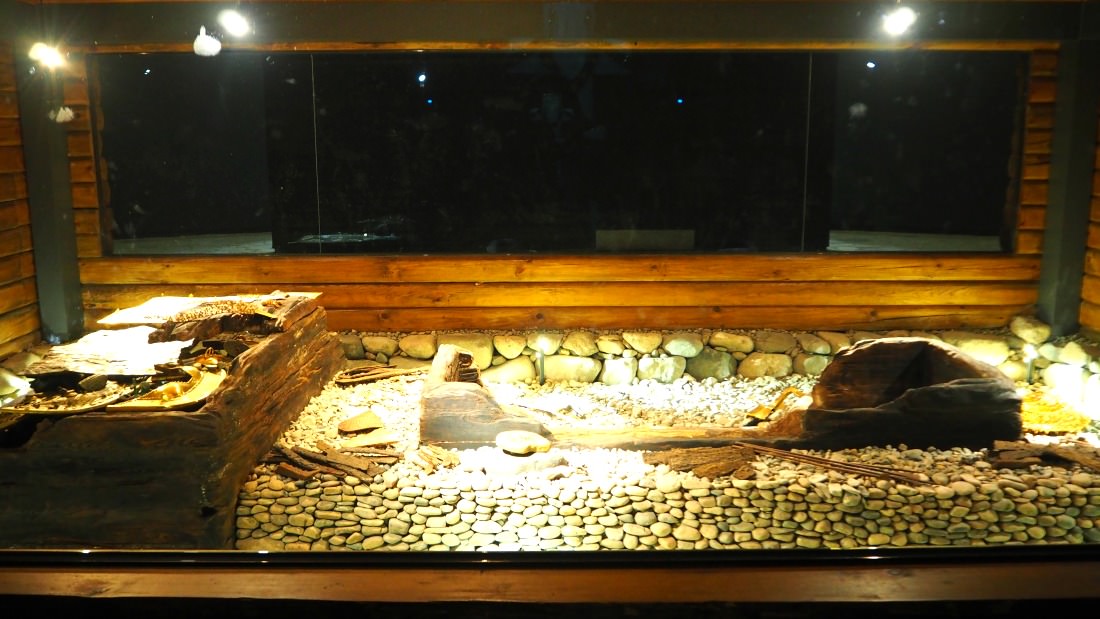 Cheonmachong Tomb in Gyeongju City, the capital of Silla

Some vessels possess a surface covered with impressed patterns that were made by the tools used to beat and harden them.

The patterns are diverse, ranging from geometric patterns to concrete forms such as animals and human figures. 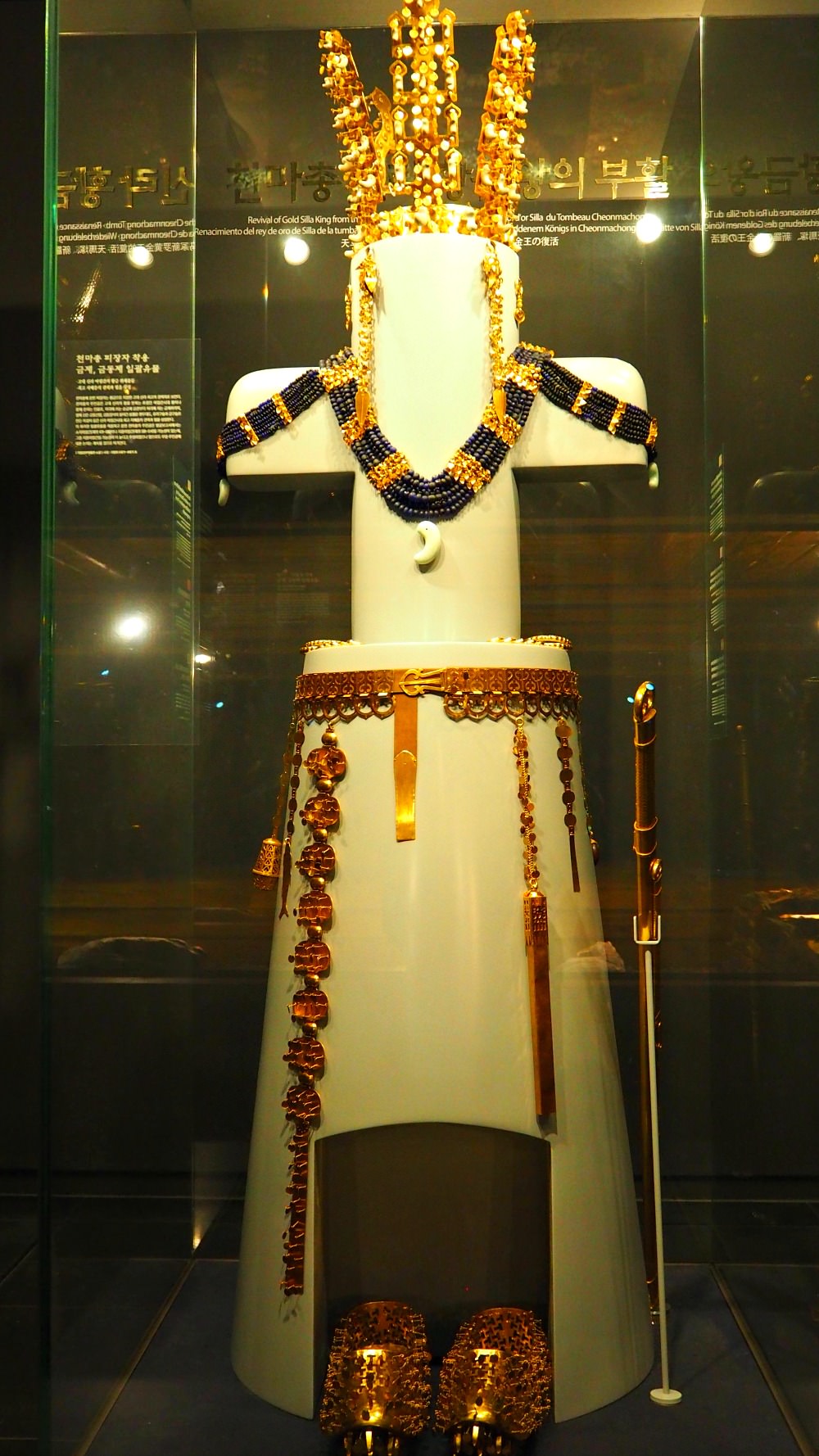 Gold Crown and Girdle
The photo is a gold crown with ornamentation in the form of tree branches and deer antlers attached along with the headband.

The gold crown is designed to express the sovereignty of the king, The identity, and worldview of the royal family.

The gold waist belt is composed of a buckle, belt-end ornaments, accessories for leather or silk-made straps, and waist pendants.

These pendants include fish-shaped pendants, miniature knife, and curved jades that seem to represent household tools.

Horse and Rider-shaped Vessel
Three-Kingdoms period (Silla), 6th century
Geumnyeongchong, Gyeongju, Gyeongsang-do
This vessel is shaped like a rider on horseback, wearing a headband and carrying some cargo on his back. 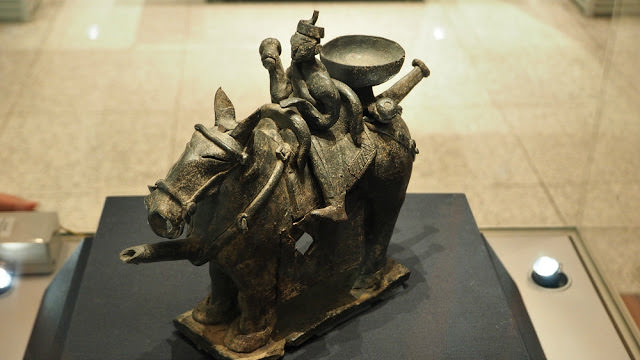 Phoenix-Shaped Glass Vessel (below)
Three-Kingdoms period (Silla), 5th century
Hwangnamdaechong, Gyeongju, Gyeongsang-do
This item was probably imported from somewhere near the Mediterranean, either by sea or the Silk Road.

The handle bears traces of what appears to be repair work (i.e., wound gold thread), indicating that this must have been a very precious object. 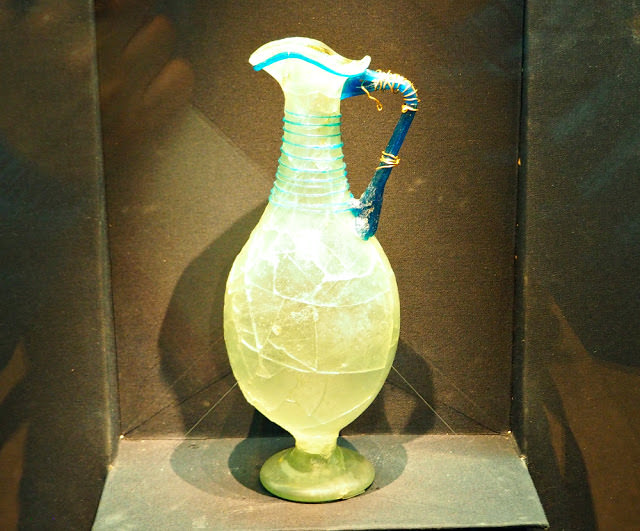 Outside Cultural Influences in the Silla Kingdom
There are wooden coffin chamber tombs with stone and earthen mounds of the Silla Kingdom that share structural similarities with those distributed around the Northern regions, including Altai and Pazyryk.

The gold crowns and bell ornaments unearthed from Silla tombs are similar to those of the Northern nomadic cultures.

Some of the excavated burial artifacts, such as glass vessels, inlaid glass beads, and decorated swords, are presumed to have been imported.

The imported goods most probably come over land and sea from as far away as West Asia and the Mediterranean via the Silk Road, attesting to the cosmopolitan character of Silla culture. 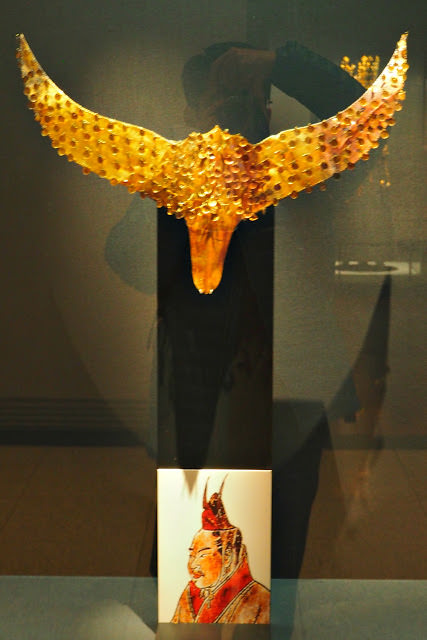 Golden Wings Crown (above)
This crown, which was usually attached to a gold cap to assemble a kind of crown, is similar in a form outstretched wings of a bird. Each wing is attached with spangles. 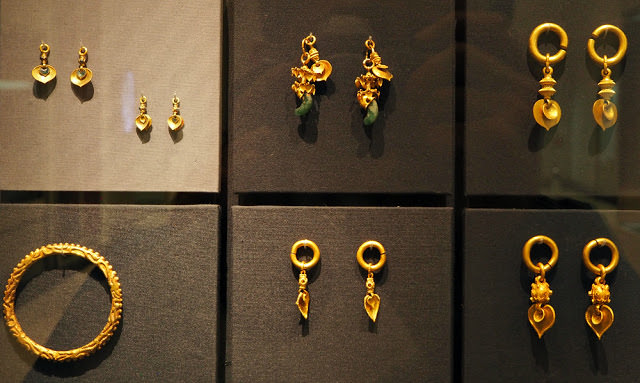 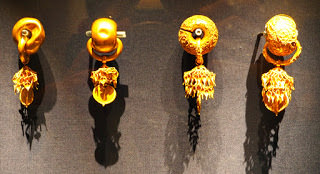 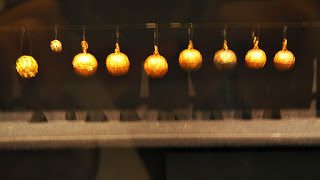 Gold Earring Ornaments
At the Bomundong Double Burial in Gyeongju and the ones in Geumjochong Tomb in Yangsan excavations feature thick and hollow rings decorated with filigree, decorative metalwork with tiny gold or silver beads securely soldered to the face of an ornamented object of similar material.

The main rings are specially decorated with lots of gold grains arranged in the tortoiseshell and floral motifs, which make them the finest of all the ear ornaments discovered in Silla burials.

The earrings in the Korean Peninsula, are classified into two kinds, according to the thickness or thinness of the central hollow ring.

It is believed that earrings with a thick hollow ring were fixed to the ear with leather string. 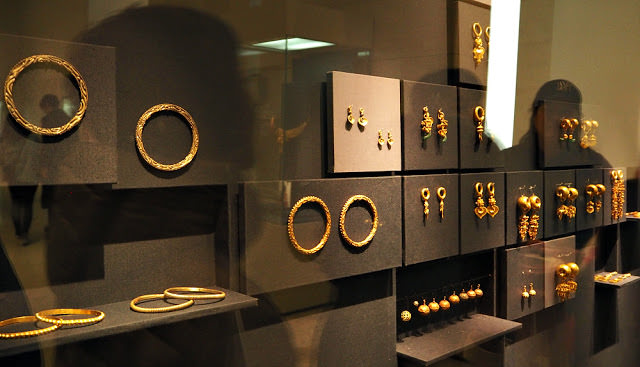 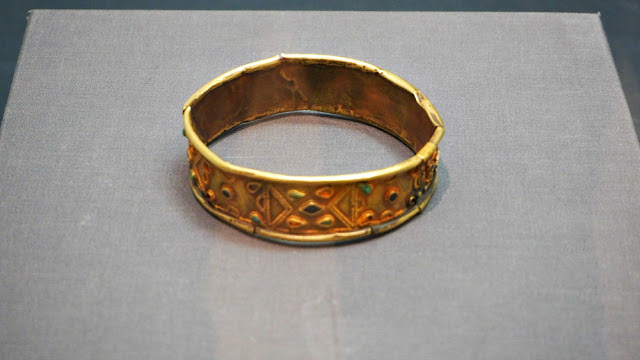 Some accessories and other items were made of glass or crystal, but gold was by far the most common material. Such adornments were also symbolic of social and political authority.

You can see more artifacts made during ancient Korea's Silla Kingdom at South Korea's national museum. Yes, they are exciting and entertaining as well as educational.

I hope this is helpful in your search for the Silla Kingdom in ancient Korea.
Have a good day!