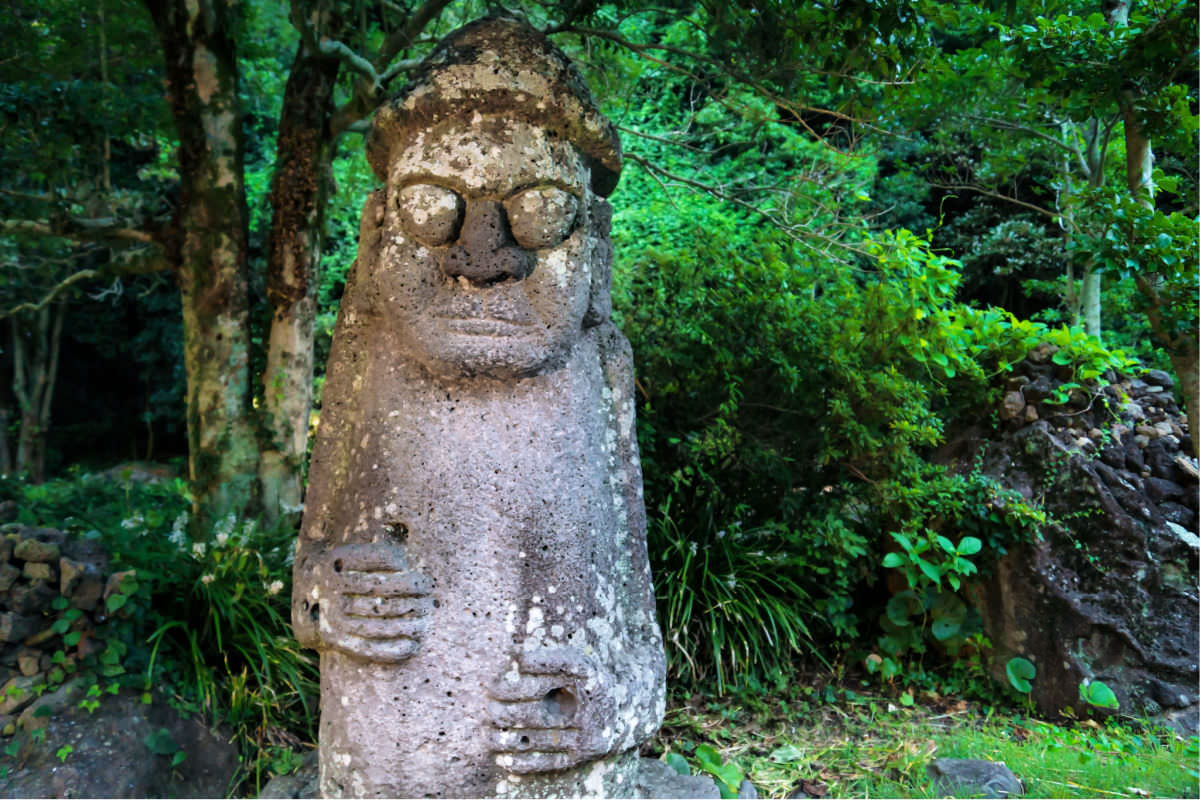 The Dol Hareubang Park is a popular destination among travelers who love to learn things native and historic to Jeju Island. The Park exhibits the ancient carved stone symbols called the 'Hareubang' by locals.

Such renowned stone sculptures, the Dol Hareubang, can be seen on tourist ornaments and products all over South Korea.

These statues of shamanistic origins are thought to be giving protection by driving away evil spirits and demons at specific places.

KNOW THIS: The Record of Tamna, according to Tamnaji, published by a group of scholars on Jeju Island, Dol Hareubang, is thought to be started by Kim Mong-gyu, the Magistrate of Jeju in 1754 during the 30th year of King Yeongjo's reign.

This article describes the essential background of this Hareubang' which is quite impressive for visitors to learn about Jeju Island's traditional and shamanistic culture.

The Dol Hareubang are carved lava stone statues erected are various strategic places and almost everywhere on the island.

In fact, you can see them inside the Korean airports and shops and entrances, particularly in Jeju Island's public and private places.

Their origins are mystical but are frequently associated with the island's shamanic customs.

The Korean word 'dol' (돌) is 'stone,' and 'hareubang' (하르방) means 'grandpa' in Jeju language. In short, the world' hareubang' refers to a carved stone of a grandfather's image.

The statues were provided this name informally across the island for many years. Still, it was just as just recently as 1971 that the Dol Hareubang were identified as folk heritage and named officially.

Before the official name was given, the Dol Hareubang was known as
'baksumori', 'wuseongmok', 'museonmok'. One old book also called then 'ongjungseok'. 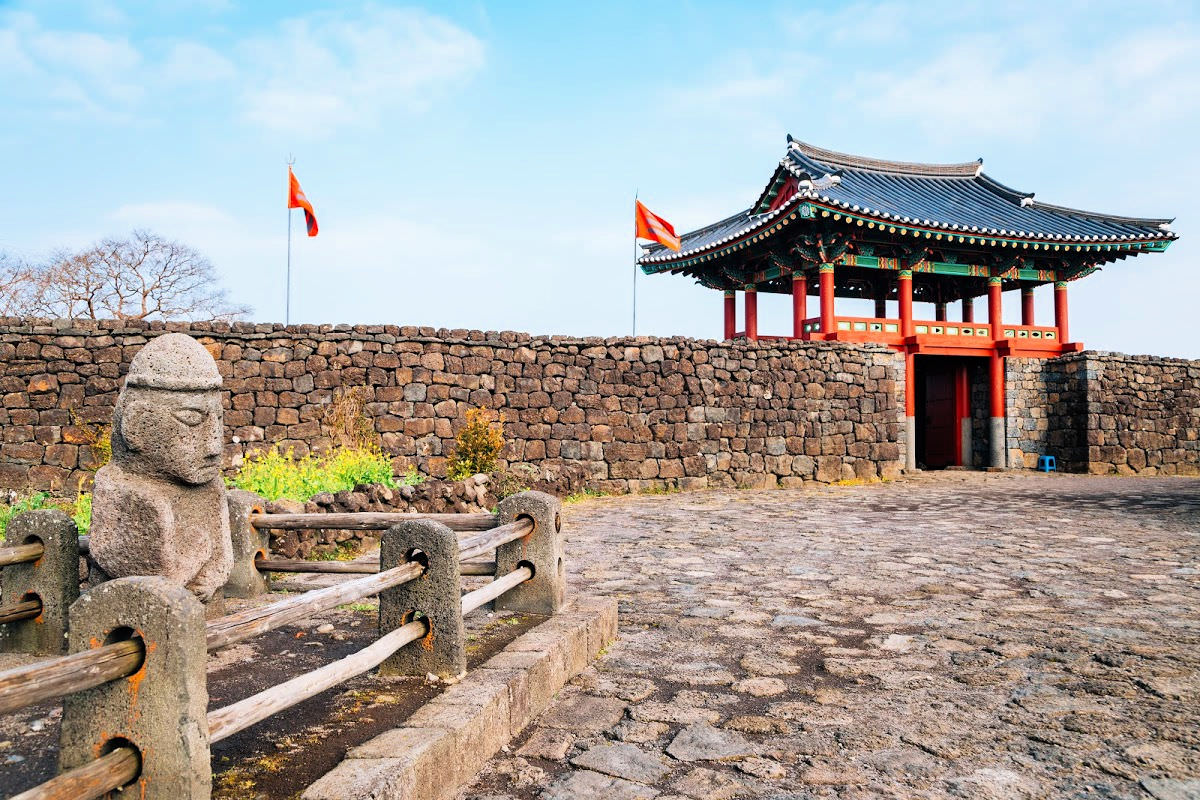 Places to Find the Dol Hareubang

First, you don't need to explore Jeju Island or seek hard to see the hareubang symbols. You can see various types, including refrigerator magnets, orange juice containers (bottles and plastics), and souvenirs.

When you are on Jeju Island, you can see them at entrances and main points in attraction sites, including beach areas and mountain trails.

As a traveler, you can spot them at Cheonjiyeon Falls in Seogwipo, Hamdeok Beach, Hyeopjae Beach, Yongduam Rock, and many places.

Dol Hareubang Park...
This is where you can see most of these stone statues. Although the Park is not so expansive, you can see the most original and ancient carvings and the recent ones.

The Park aims to help visitors learn more about the origins of hareubang (or Halbang), their history, and purpose relevant to the local and indigenous beliefs.

Now, let me try to describe the original meaning and purpose of these carvings.

Origins of the Dol Hareubang

Expect that there is no straightforward answer to such questions. Usually, you would find mysteries surrounding it as it is a symbol that needs studies by experts.

Some say that the Hareubang is somewhat analogous to totems, which I would positively agree with. The closest one I can think of is the famous totems found on the Easter Islands.

One of the distinct features you will notice about the Hareubang is that it has a round or mushroom-shaped hat. Some experts believe that the hat-shaped could be related to the locals' shamanistic mushroom culture in the past.

Today, the sculptures are commonly comprehended to have a dual function of health and fertility.

Many of the Dol Hareubang was originally set at fortress entryways, which led to them being viewed as guardians of the island's buildings and people.

Symbol of Fertility
I believe that the symbol is being installed and prayed to during planting season for a great harvest. Such symbolism of fertility can also be associated not only to harvest but also to procreate and have children.

Jeju island is known as South Korea's 'honeymoon capital,' This, combined with the statues' rather suggestive headwear, has actually caused a strong belief that the Dol Hareubang represents fertility gods.

A legend states that a newly-married lady can rub various parts of the statue to increase her opportunities of conceiving the desired child-- the nose for a boy, the ears for a lady.

A lot of the statues have worn-down features as a result of this practice!

The Dol Hareubang Park is open all-year-round to its guests unless some special holidays are announced as closed days.

Entrance Fees:
Depending on the number and age group, visitors need to pay for a reasonable admission fee. Here it is...

Take note that a 'Group' means from 20 guests and above to be entitled to get that rate.

Credit Cards and Cash are both accepted for admission fees.

Getting to Dol Hareubang Park

The Dol Hareubang Park is located in Bukcheon as you head out to the east side of the island along the coast. You will be passing by Hamdeok Beach before you reach the Park.

You can take public transportation to get here, including a bus or taxi. Car, motorbike, or bicycle are available for rent on the island.

Thanks, and I hope you'll enjoy meeting with the Hareubang to achieve what you are seeking in your travel!