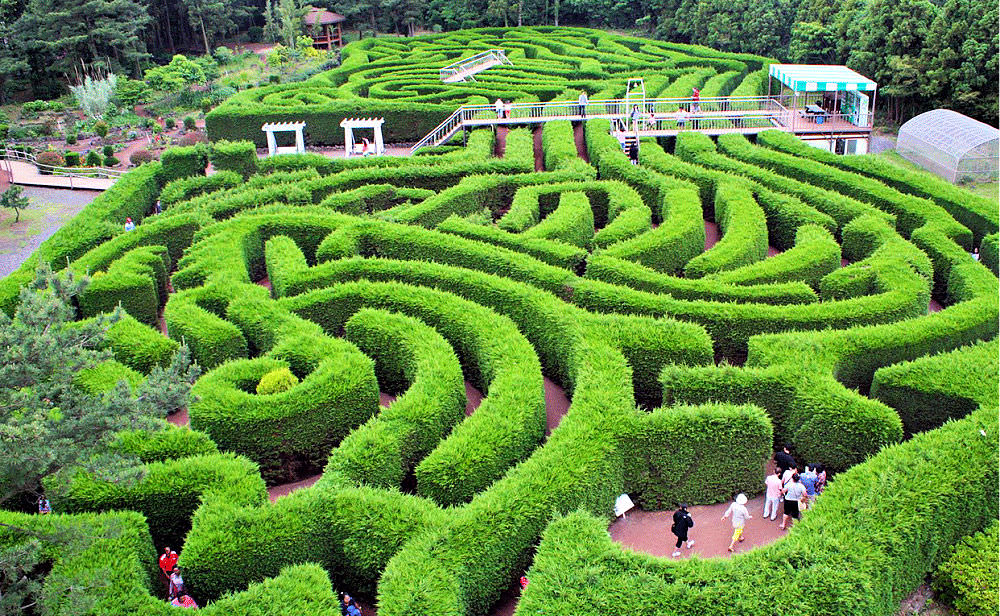 Gimnyeong Maze Park is a popular leisure park located close to many attractions on Jeju Island. This is where children and adults alike have fun, let loose, and challenge themselves while enjoying the maze themes.

Gimnyeong Maze Park (or Kimnyoung Maze Park) is considered the first maze park in Asia that uses symbols as its themes.

The green maze is created with thickets of various plant species, including the evergreen Leylandii and Jeju Scoria. The other plants are from all over Asia and are being carefully maintained.

TRIVIA: Gimnyeong is the first maze park in Korea, opened to the public in 1987. It is a project created through the initiative of F. H. Dustin, an American Professor on Jeju Island. The maze park has seven symbols that represent Jeju's past and geographical landmarks.

It means that you will be having fun or getting lost in the maze of eco-friendly and healthy plants that give off oxygen in exchange for your carbon dioxide emissions.

Another exciting feature you will discover when at the site are the felines everywhere. The Park is considered the first feline Park in South Korea, where around fifty cats enjoy their lives enjoying the sun and the shades.

As mentioned above, Kimnyoung Maze Park (or spelled as "Gimnyeong") is created with symbols and images about Jeju's history and its geographical descriptions.

The maze itself is shaped like Jeju Island. And you can see the images if viewed from above...

Those items are famous images and symbols which are also used as landmarks of Jeju Island.

The Maze creation was funded by the brain of the Park, Frederic H. Dustin, a professor at Jeju National University whose affection for the island sustained him for almost 30 years. He used his life savings just to leave this enduring and impressive legacy.

You can enjoy the three skywalks and one observatory where most visitors use or employ their photography skills. Of course, selfies and such pic-of-the-day shots are great for IGs!

The view of the maze is amazing from the observatory. Maybe it is wise to come up here and see the serpentine maze so that you'll have an idea how to get through it from the entrance to the exit in a shorter time.

How To Beat It!
If you are willing to enjoy the maze and explore its Byzantine design, you could spend an hour or less.

Some can make it in around 20 twenty from the entrance to the exit. However, if you just want to get with it right away, you can use a map and come out in 5 minutes!

It would be best if you didn't do that because that is not exciting. That merely is defeating the purpose of a maze, right? Anyway... your choice!

But if you think you are lost and giving up, you can call for help by contacting the management of the Park (no, not the emergency number!).

You may use the following contact details, address, and relevant information before deciding to visit the place.

The parking area is available if you come with your vehicle.

Getting to Gimnyeong Maze Park

You can take public transportation to find this Park. Alternatively, you can rent a car, motorbike, or a bicycle (or battery-operated scooters) on the island.

You need to book a car (or van) in advance, especially during peak seasons such as summer (June, July, August).

By Bus
Take bus #100 from Jeju International Airport and then get off at the Intercity Bus Terminal in Jeju City.

Then transfer to a bus for Manjanggul Cave and get off at the parking area by the Cave's entrance. Travel time is around 50 minutes in total.

Alternatively, you can take bus #38 from Jeju International Airport and get off at Hamdeok-ri. Transfer to a bus for the East Coast (or Dongilju), or take the Eupmyeong Circulation Bus (읍면순환 버스) then get off near the Manjanggul Cave's entrance area.

Walk on the road to the Cave for around 10 minutes, and nearby, you will find Gimnyeong Maze Park.

Also, taking a taxi from Jeju International Airport could be much quicker.