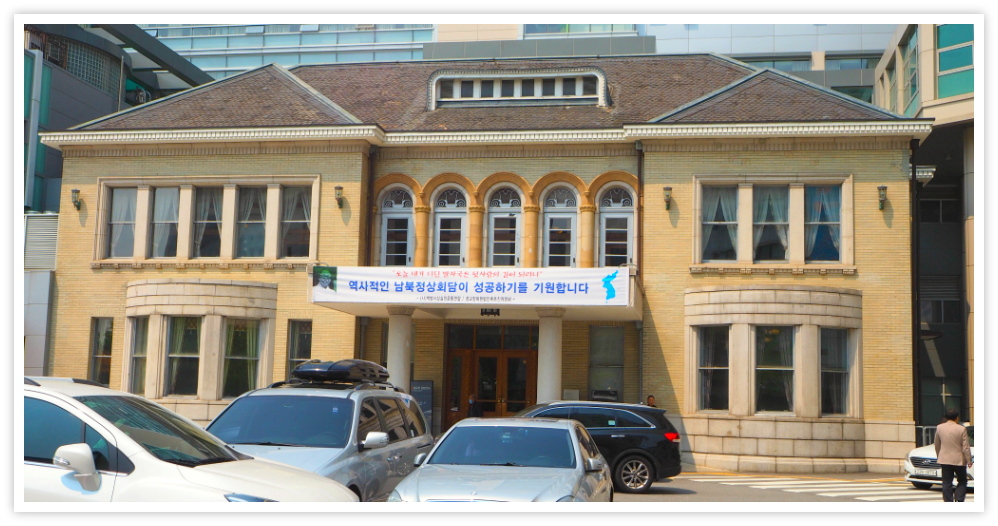 Gyeonggyojang Museum is a historic structure located in Sodaemun, Seoul area. The old building was the original home of the Provisional Government of the Republic of Korea. It was the republic’s office from 1945 to 1949, the period that followed right after its independence from Japan.

Gyeonggyojang was also used as the interim administration’s leader Kim Gu was assassinated. Kim Gu and his cabinet members stood against foreign domination of Korea by the United States, China, the Soviet Union and the United Kingdom at this building.

The building was then turned into both an embassy and a hospital after Kim Gu died. However, sixty-four years after Kim Gu’s death, the building was restored to its original design in 2013. Since its restoration, Gyeonggyojang serves as a museum up to the present.

Gyeonggyojang was built by Choi Chang-hak, a mining business person, during the Japanese occupation in 1938. The building served as Kim Gu’s living quarter and the administrative building for the provisional government of Korea during that period. After his death, the Republic of China, Vietnam, and other countries used it as their embassy.

Right after those countries used the building, the Korean government turned it into a hospital. That is probably the main reason why it is surrounded by a famous hospital at present - Gangbuk Samsung Byoungwon (Hospital).

The restoration of its original architectural design was carried out from 2010 up to 2013. Yes, I remember the first time I visited the place and was wondering how come the building looks much older but the inside looks new, such as the rooms and spaces used by Kim Gu. The restoration was implemented using the old photographs and the original blueprint of the building.

That historical description can be found at the Exhibition Hall 1 in the museum.

Records and Legacies of the Provisional Government

The building served as the primary center for the independence movement. The movement kept on fighting for its independence through campaigns opposing foreign trusteeship of the nation. The independent movement kept on pushing for the unity of the peninsula. When the official Republic of Korea was established in 1948, the traditions of the provisional government were eventually incorporated into its system.

Photographs and historical descriptions of those events are available at the museum’s Exhibition Hall 2.

For an independent and united Korea, President Kim Gu and his cabinet members had the support from both the North and South Koreans.

The supports had made the provisional government very strong and unified against foreign trusteeship of the country, which was strengthened when a national committee for the movement was created.

Kim Gu had been very dedicated to their vision, which was shown by leading the North and South negotiations. However, the fate of his visions was dramatically cut short when he was assassinated inside his office in Gyeonggyojang on June 26, 1949.

See more descriptions and interesting photos of the events in that period at Exhibition Hall 3 at Gyeonggyojang.

What You Can See at the Museum

Researchers were able to collect historical data, photos, documents, memorabilia and other records which are available for public viewing at the museum.

On the first floor of the building, you will find all the materials used in the Reception Room of the Korean Provisional Government where ministerial meetings occurred. It is also where President Kim Gu received both local and foreign dignitaries.

The dining room is also located on the first floor of the same building where the provisional government held the dinner party on December 2, 1945. Sadly, it is also used as the room where Kim Gu’s funeral was held.

On the second floor, you can find another reception room where Kim Gu received his Korean party leaders and held his ministerial meetings.

On this same floor, you can find Kim Gu’s office and living room. It is where he received his visitors and was brutally shot on June 26, 1949. You can see the holes in the glass window where the two bullets passed through and killed Kim Gu.

When you are in Seoul area, it should not be of much trouble finding Gyeonggyojang as it is close to most popular travel places and attractions in Seoul, such as the Deoksugung Palace, Seoul History Museum, Gwangwhamun Square, among others.

By bus, you can take various buses depending on your point of departure. So, I suggest you pick up a guide material (phone or map).

Hope you will learn a lot from your visit when you do. Good day!