Gyeongju Tumuli Gongwon should be one of the top sites you visit will when you're in this city. It is a royal burial area turned into a park for the public to see.

If you haven't heard about Gyeongju City before, I gently suggest that you learn and explore a bit this article so that you will start to appreciate this exciting place.

In fact, Gyeongju is called the "museum or exhibition without roofs or walls" in Gyeongsangbukdo Province. Why?

That's because Gyeongju offers exciting attractions, attractions which are supposed to be inside museums and not outside of them. Museums or other structures with no roofs and other protections.

Yes, I can say that literally. For example, I was fascinated when I hiked to see the Chilbulam Temple, where the carved Buddha figures are located. However, I was feeling concerned (and sad) that this religious and work of art will slowly deteriorate in quality due to natural elements or any. 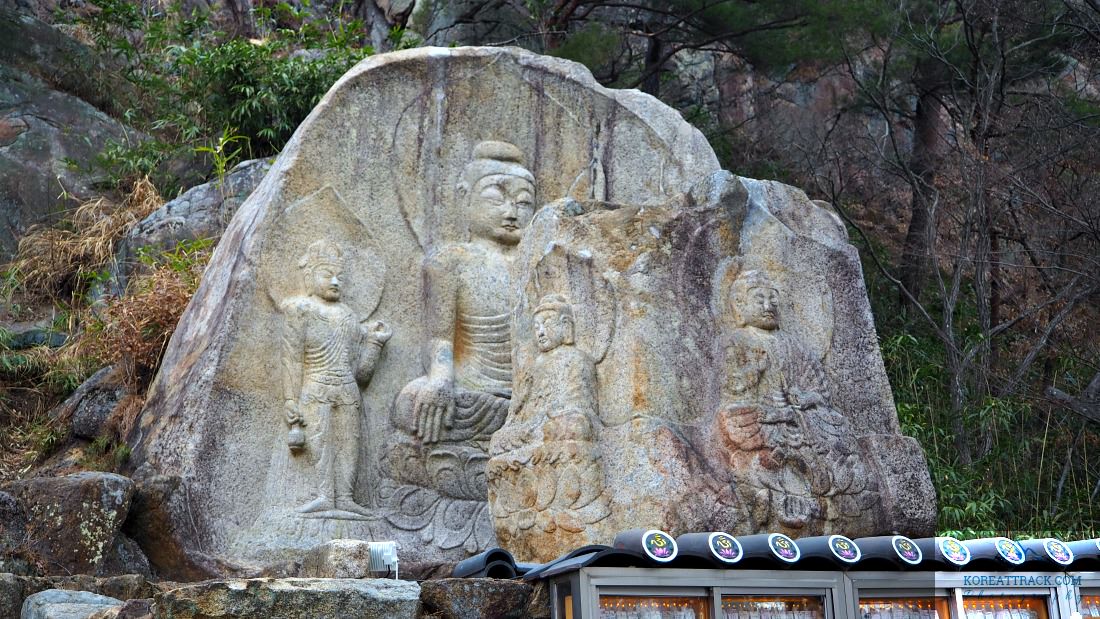 Chilbulam Hermitage and Temple has a special Seven Buddhas carved on the faces of granite stones in Namsan (mountain), Gyeonju City

Anyway, what I am trying to say is that tourism attractions can be observed and explored outside because they are spread all over Gyeongju City and its surroundings.

Anywhere you go, you will bump into historical and ancient items or sites. Alright, let me continue by describing a little bit more about Gyeongju Tumuli Gongwon's features...

The vast, walled park has 23 tombs of Silla monarchs and family members. From the outside, they resemble substantial grassy hillocks that echo the mountains outside town. Many of the tumuli have yielded fabulous treasures on display at the Gyeongju National Museum.

One of the tombs, Cheonmachong, is open to visitors. You will be getting inside the earthen mound to see the tomb inside. Cheonmacheong is  13 meters high and 47 meters in diameter. Archaeologists believed that the tomb was built around the end of the 5th century.

Duplicates of the golden crown, gold belt, bracelets, jade ornaments, weapons, and pottery found here are displayed in glass cases around the inside of the tomb.

The park is a truly sublime and romantic place to wander, especially at dawn or at sunset. Visitors are forbidden from climbing any of the burial mounds. The penalties are very severe and could put you in prison for up to two years.

I suggest you better visit Gyeongju Tumuli Gongwon between Spring and Fall seasons if you wish to stay later in the evening. That's because the park closes early or at sunset during colder Winter season. 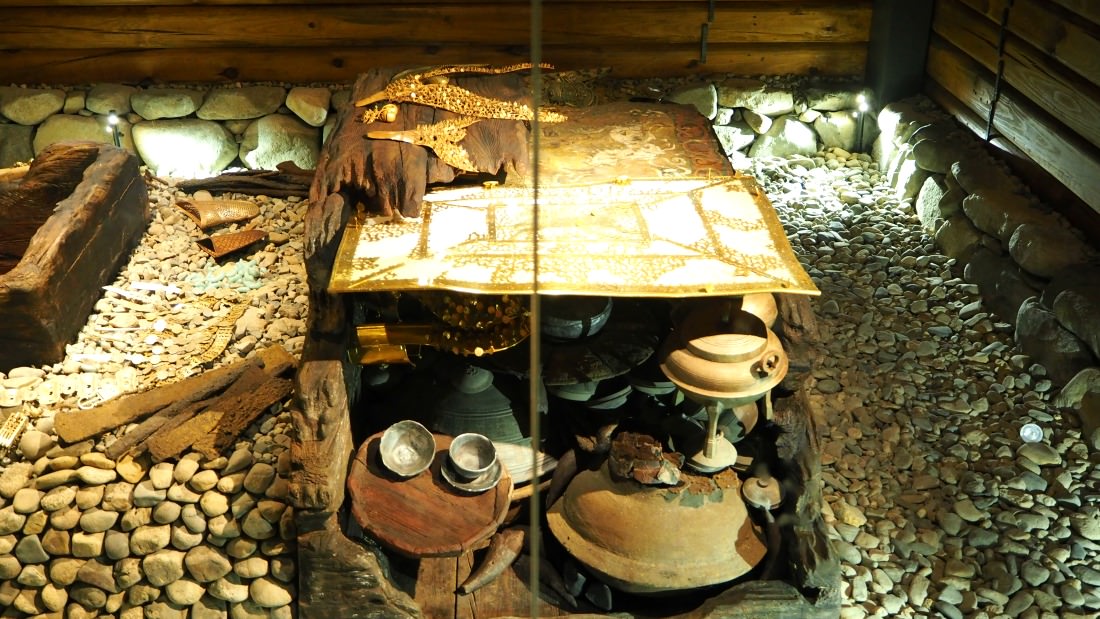 Artifacts were excavated surrounding the Cheonmachong tomb at Tumuli Gongwon

You won't miss spotting the Tumuli Gongwon because the mounds are very conspicuous. In the center of Gyeongju City, the walled-off Tumuli Park (대릉원) consists of over two tombs area.

It's tough to picture that this was until rather recently a functioning-- though quiet-- part of town.

However, in the 1970s, the houses were removed. It is followed by city beautification through planting trees and setting up facilities for visitors to use for relaxation--including seats, pathways, washrooms, among others. 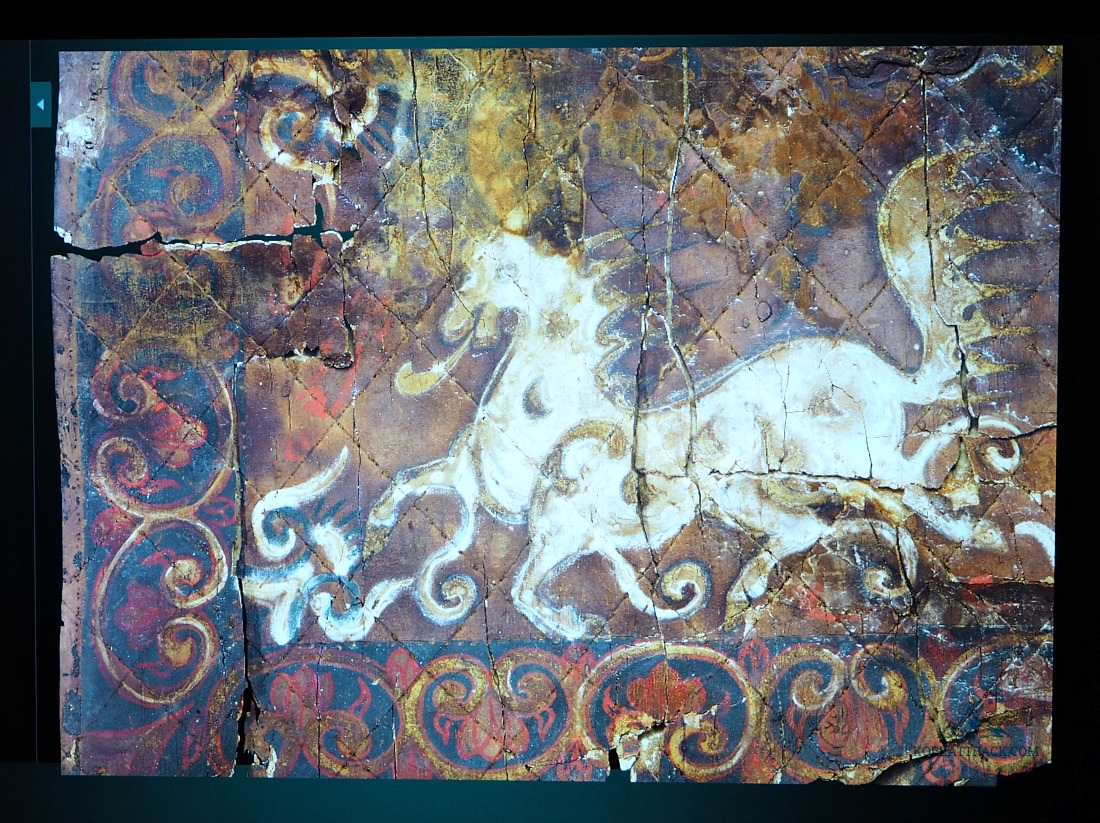 Cheonmachong Tomb
Entrances lie at the east and north of the complex, but its most famous tombs sit to the far west. At this part, you'll find Cheonmachong (천마총), as mentioned above, the only burial place in Korea that you can actually get in.

The buried royal is not known until now. However, it is thought to be a 7th or 6th-century king whose many horse-related implements gave rise to the name--Cheonmachong, which means "Heavenly Horse Burial Place."

Excavated in 1973, it yielded over twelve thousand artifacts. The number of artifacts is the biggest single haul in the country. Although many went to Gyeongju Museum, you can still find some originals and mostly copies inside the burial mound.

In Gyeongju Tumuli Gongwon, one can also find another tomb. It is a massive tomb of King Michu, who was believed to have reigned from 262 to 284 century.

King Michu Tomb
King Michu was known as a brave commander of the Silla Kingdom who fought many battles to keep the kingdom safe from the neighboring and rival Baekje Kingdom.

According to legend, King Michu dispatched a ghost army of soldiers from beyond the tomb when his follower was losing a fight.

The ghost soldiers were never seen again when the battle was over that left only the dead enemies and bamboo leaves in the field.

For this reason, the tomb is dubbed as the "Burial place of the Bamboo King." Another burial place of note is the double-humped Hwangnam Daechong, which was almost certainly the resting place of a king and queen.

These tombs are just some of the known (or still under investigation) at Tumuli Gongwon. Future findings, artifacts excavations, and confirmations through archaeological activities will shed more light on the real stories surrounding the tombs.

Yes, I myself is also excited to see more findings and facts of the culture, environment, lifestyle, and struggles of the people under the leadership of the royals during the three kingdoms period.

I will keep on updating this page every time I get the latest information regarding the tombs in question. So, please stay tuned!

Thanks for reading this article. I hope you have great travels!