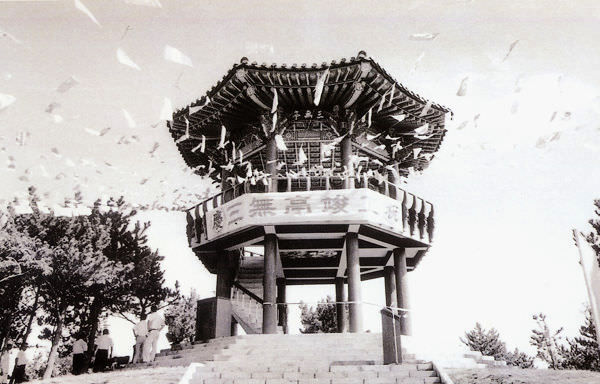 Sammu Park is a favorite hang-out for Jeju Island people due to the historical and symbolic meaning of its name. Above all, the Park provides a relaxing and liberating feeling among its avid and regular visitors.

The word 'sammu' is from the two Chinese characters (三無), indicating that Jeju Island has three things ('sam' for 'three' and 'mu' for 'nothing') that do not exist: gates, thieves, and beggars.

That is why the Park is popular despite its being an 'ordinary' park--nothing fancy or artistic symbols or sculptures. It is precisely for that reason that it is relaxing and liberating.

There is nothing extraordinary in that Park--it is just full of trees. It is the pine trees that provide oxygen must be the healing effect of its visitors.

Many say that Jeju people have always believed, trusted, and supported each other since long ago.

Because of that culture and mindset, residents would never close their gates. And one would not or never try to break into another's house.

They look out and support each other. When a neighbor is in need, they would automatically offer help, such as providing food and basic necessities to the needy.

That's precisely the explanation of why there is no beggar on the island. (But things might have changed due to the influence from the outside world--I mean culture and mindset of the visitors or newcomers who only things of business and competition).

So, why would you even think of visiting the Park if there's nothing special about it?

I have heard the same curious questions from other travelers to the island. They would ask the taxi drivers about the Park.

The drivers would simply respond that 'there's nothing special about Jeju Sammu Park except that it has a lot of pine trees.'

Maybe, you would not understand its simplicity now. But if you are really curious to know what it feels like when at the Park, why not try and see for yourself?

In fact, there is another island or islet in Shin Jeju with a park with a similar name. I think that it is the tradition or say the nostalgia that prompts them to give that name to such enclosures.

What Else Can You Find?

As a brief description of the Park's size, Jeju Sammu Park is on an area of over 20 thousand square meters by the side of Beduri Oreum (a local term for a volcano). It was built in 1978, according to the source.

Now, here are the things and facilities you can find...

Also, close to the peak of Beduri Oreum is a traditional octagon-shaped pavilion called Sammujeong. It is built with a fine-looking conventional Korean style.

The small pavilion offers a resting place with a serene atmosphere surrounded by the towering pine trees.

Besides, you can find an old train sitting on the ground next to the basketball court. The train is a MIKA Steam Locomotive No. 304. It is the only steam locomotive that used to transport coal.

The steam train was made in Japan in 1944 during the Japanese occupation. The train was used until the late 1960s. It is posted on this Park for children to see how things look and how people do something in the past.

To summarize the possible things you can do in the Park, I can say that it is a place to relax and experience life outside of one's daily toils.

The air is clean. The wind is refreshing. And it is just a cool place to be.

Those who love the serene atmosphere, they come to think and meditate, while others come to exercise and stretch out their stresses away!

Extension of the Park...

In 2014, the Jeju tourism authority expanded the Park by extending it to the Bao Jian Street tourism and shopping district.

At Sammu Park's south entrance, you can find a huge clock surrounded by flowering plants and neon lampposts. The clock is undoubtedly modern to match the area.

Bao Jian Street is where you can have fun in the evening of Jeju Island's nightlife.

Getting to Jeju Sammu Park

You can take any public transportation to the Park, such as a bus, taxi, and metro.

By Metro
Get off at Sammun Park Metro Station.

By Taxi
It only takes less than ten minutes from the airport as the Park is in Jeju City itself.

Thanks for dropping by and reading this article.