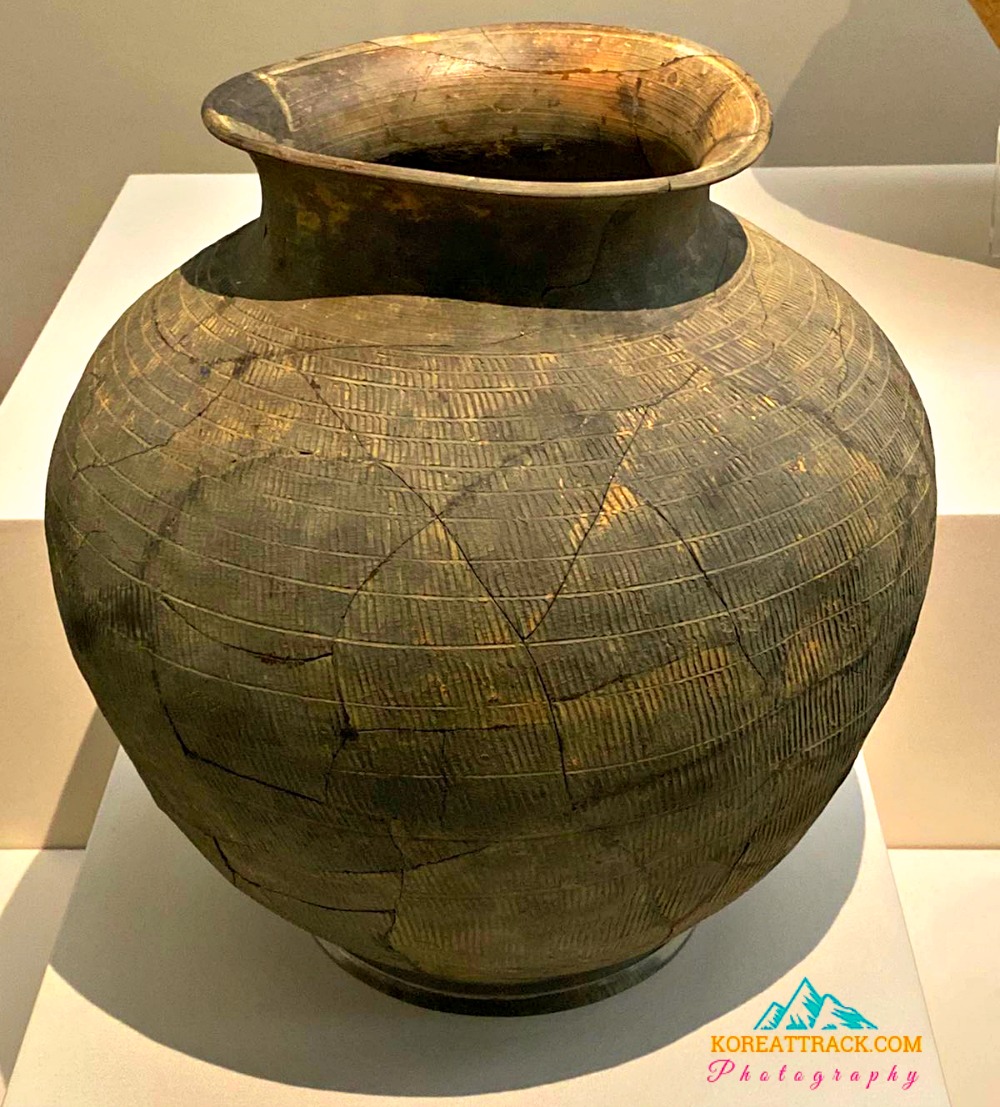 Earthen Jar believed to be made during the Three Kingdoms period in Korea. I took this photo in Cheongju Museum

Mongchontoseong Earthen Fortress (Korean: 몽촌토성) is an ancient earthen rampart dating from the Baekje kingdom. It appears to have played the very same function in safeguarding the area the strongholds constructed on Acha Mountain.

Mongchontoseong Fortress lies what is now in the Olympic Park of Seoul, South Korea. During the 1988 Summer Olympics, the running portion of the modern-day pentathlon event was hosted there.

A variety of significant excavations of the site were performed prior to the construction of the nearby Olympic Park.

The stronghold walls are approximated to have had to do with 2.7 kilometers in length and approximately 6 to 7 meters high.

The fortifications of Mongchontoseong had two unique functions: a palisade atop a moat and the wall surrounding its base. They are part of Wiryeseong with Pungnaptoseong.

In the location of Songpa, south of the Han River in Seoul, are remains of the Baekje Kingdom, significantly two earth-wall fortresses and numerous antiques from excavations there.

Mongchontoseong Fortress is inside the Olympic Park, a large green park with wilderness areas, lakes, and other fascinating functions, the main one being the Fortress.

Just like most cultures in the past around the world, land, and people experienced unity, disunity, and vice versa. This phenomenon also happened in Korea through time.

Unity and reunification depended wholly on the powers of the leaders and states.

As an extremely quick summary, the significant kingdoms of the past were the Goguryeo, Baekje, and Silla, which were then unified into the United Silla Kingdom.

The Goryeo Dynasty, later on, followed the united kingdom of Silla, and after that, the Joseon Dynasty.

The Joseon Dynasty lasted around 500 years and was the last unified kingdom before the Japanese invasion in the early 1900s.

Significant Excavations in the Fortress

In the Three Kingdoms Period on the Korean peninsula, the Baekje Kingdom was focused around this area of the peninsula, along the Hanggang River. Its primary town center was known as Hangseong.

Historical excavations and research study from Samguksagi (the Historical Record of the Three Kingdoms) tell that Baekje had two immense earthen fortresses (in some cases called castles).

The first, Pungnaptoseoung to the north, was integrated into the early Baekje Kingdom before the 3rd century and was an influential center of marine transportation.

The second, Mongchontoseong, a little south of the very first one, is believed to have been built under the reign of King Geunchogo.

Mongchontoseong was built after the 4th century and structured as a high fortress neglecting the whole location in case wars occur.

Mongchontoseong earthen wall was constructed at the end of a natural slope extending from Namhansan Mountain.

The natural landscape of the Hanggang River was used as part of the wall. So, it was here that Baekje was able to lay its structure as a strong kingdom.

It was believed that this was where 30,000 soldiers of Goguryeo (among the other Kingdoms) under King Jangsu attacked Hanseong, Baekje, in 475.

It is said that the castle surrendered after being sieged continuously for seven days under Baekje King Gaero (455-475). King Gaero remained in the southern section of the castle, attempted to escape to the west, but didn't make it.

The place brings in lots of visitors, as it is a substantial archaeological site. During summertime, the area is covered with fields of canola flowers, barley, green lawns, and gardens.

Along the top of the now-grass-covered earth walls, you get a good view out over the park and to modern-day Seoul and large groups of apartment buildings.

In this park, too, you will see some squirrels and pheasants, and heard numerous other birds.

Gommal Bridge
The fortress/castle is a 2.3 km-long earth fortress wall (about 1.4 miles), in an approximately circular shape, the walls varying in between 6-40 m (about 20-131 feet) high.

The location inside the castle walls is 216,000 square meters (about 54 acres). Songnaecheon Stream flows along the walls and works like a moat.

A lovely bridge crosses at one point. This is the Gommal Bridge (Gommal-Dari). "Gommal" suggests a bridge found in a dream village. "Gommal," derived from the antiquated "Ggummaul," is an old Korean word for "Mongchon."

The information board explains that "this classical and stunning Korean word was given to this bridge in March 1986."

In the fortress area, archaeologists discovered, together with storage pits and a pond, numerous pieces of earthenware, Chinese-made porcelain, bone, armor, and such, have actually all been uncovered here.

At one spot in the center of the fortress enclosure, you discover an ancient area of dug-out huts and some old tombs remaining, with stone chambers and soil mounds typical of the early Baekje period (200-475).

They are closed off, so you can not get into them, but you can see where and how they were located. Likewise discovered in the area was a hearth proving pre-historic habitation, as well as stone tablets, pieces of stone swords, and Baekje earthenware.

These discoveries led scientists to think that this location was the base for Baekje culture for an extended duration.

Seoul Baekje Museum
The small Mongchon Museum of History on the north side has historic antiques discovered during the excavation of Mongchontoseong Fortress and Pungnaptoseong Fortress.

Notable are some valuable golden antiques of the Baekje kings, a seven-pronged sword called Chiljido (that testifies to the exceptional iron-smelting abilities of the time), and many pots.

The history of human settlement here goes way back. The museum is free and open daily, except Monday.

At Mongchontoseong Fortress Park, you can find some necessary facilities to make your exploration there more exciting and more comfortable.

Mongchontoseong Museum of History opens from 9 AM up to 6 PM only.

Here are the accessible and rental facilities...

All public transports in Seoul can quickly get you there in a jiffy! But you can soon get there if you take the Seoul Metro, the primary and most comfortable transport in this capital city.

Take Seoul Subway Line 8 and get off with that same name Mongchontoseong Station. Come out from Exit 3.

As it is close to World Peace Gate, you only need to follow the signboard.

Alternatively, take Subway Line 5, then get off at Olympic Park Station. Then go to Exit 3 and walk for around ten minutes to get there.

When you're already at the park, you can find large information boards with descriptions and maps. You can find instructions in various languages, including the English version guide map.

Thanks for reading this article.