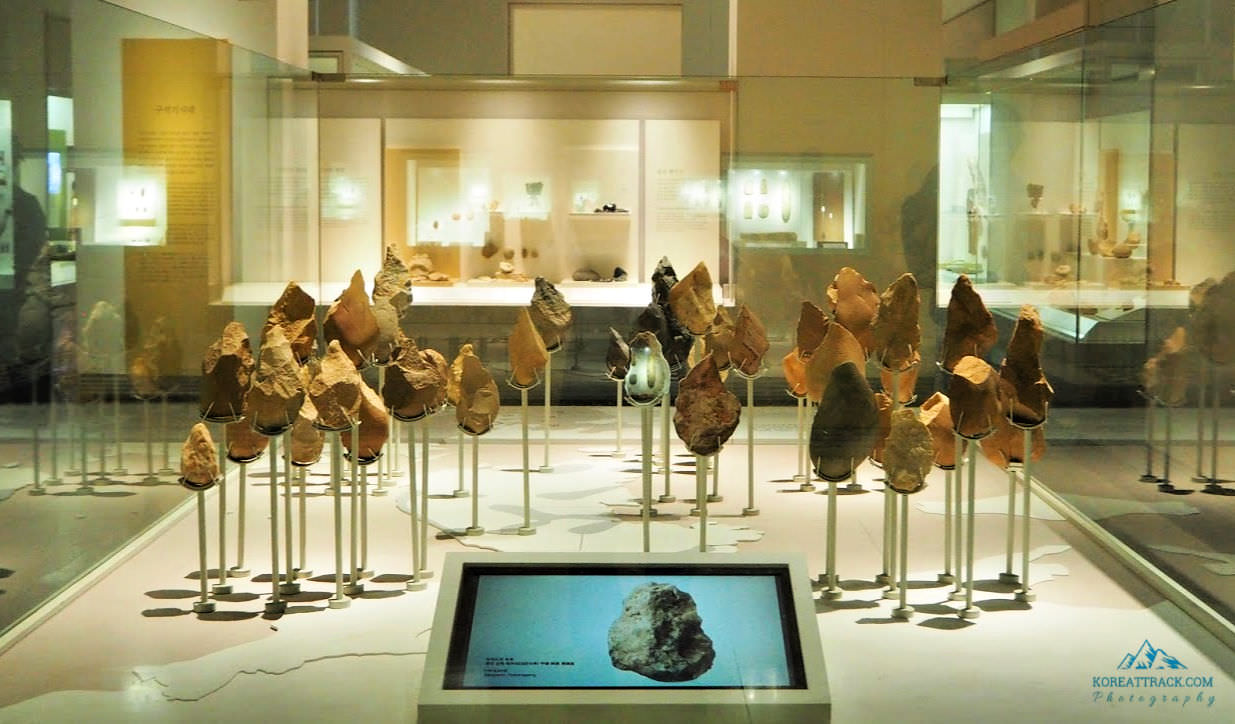 Prehistoric Ancient Korea
I have always wondered how the early settlers of Korea have lived and developed through the ages. Although I have been living here for a couple of decades already, I admit that this is the first time that I explored the National Museum of Korea (or NMK).

During my first visit to the NMK, I have learned more about Korea's origins and life in the past. Of course, the items on exhibition (both originals and replicas) are fantastic and have been very helpful in learning the country's ancient history.

Therefore, if you are the type of person who loves to learn through visual means, the Museum is not only educational but superbly awesome.

Now, let me share and describe briefly the items I have seen through the photos I took. Most of the descriptions here are sourced from the Museum and should be credited from there. 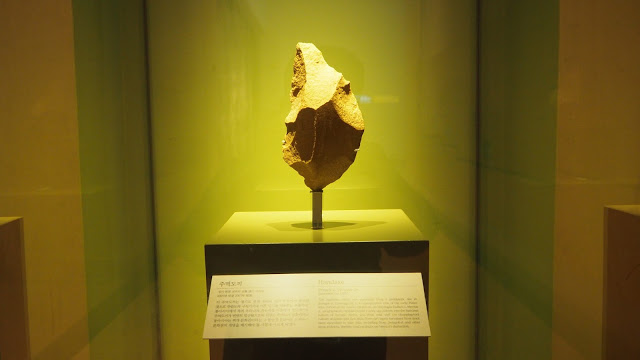 The above photo is called 'Handaxe,' which was excavated in 2007 in Jeonggokri, Gyeonggi-do.

This handaxe, which was excavated from a prehistoric site in Jeongok-ri, Gyeonggi-do, is a representative relic of the early Paleolithic Period on the Korean Peninsula.

Archaeologist Hallam Movius Jr geographically divided the world's stone-age culture into the handaxe culture of Europe, Africa, and West Asia, and the chopping-tool culture of South and East Asia.

However, many handaxes have since been excavated in East Asia, including from Jeongok-ri and other areas in Korea, thereby casting doubt on Movius's distinction.

Manufacture of Tools
Paleolithic people used stone, wood, animal bone, and horn to make the tools required by their daily activities. Of these Paleolithic tools, it is generally those made of stones that have been preserved.

However, tools made of bone have also been recovered from archaeological contexts, albeit in rare circumstances. 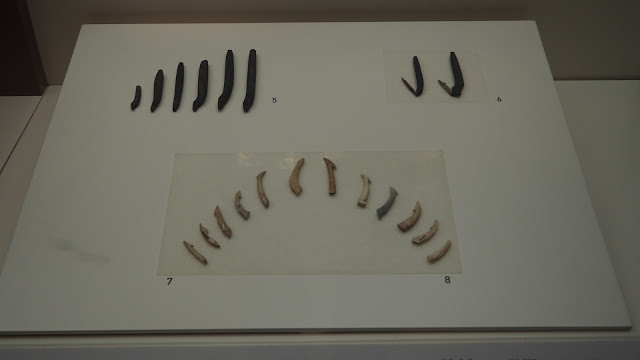 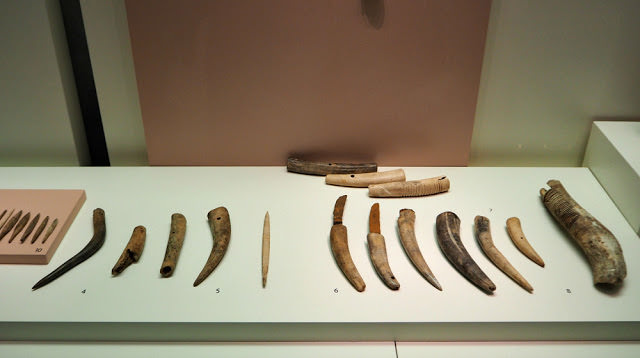 Natural Stone and Chipped Stone Tools
What is the difference between a naturally chipped stone and an artificially cracked stone tool? Chipped stone tools have a regular shape and contain substantial evidence of deliberate alteration.

A preference for certain stone types can also be observed in the case of stone tools. The manufacturing process of chipped stone tools can be inferred by refitting stone cores and flakes. 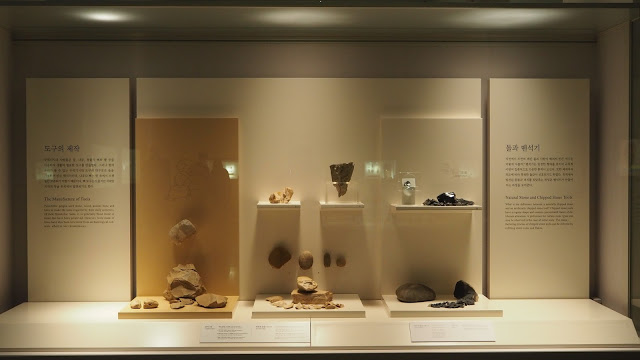 The Neolithic Age began around 10,000 years ago with the end of the Ice Age when communities began to produce pottery and polished stone tools.

People lived in pit dwellings near the riverside or seaside and obtained food through fishing, hunting, and gathering.

The domestication of animals and the rudimentary cultivation of crops also took place. Besides, the Neolithic communities exchange information and resources with neighboring regions. 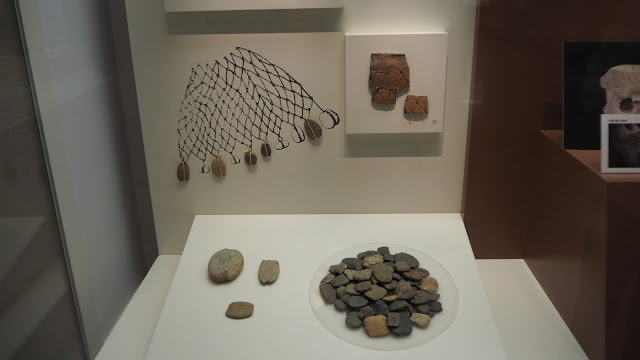 Small and nimble animals, such as wild pigs and deer, made an appearance.

Bows and arrows were used for hunting such animals, and pottery was used to effectively transport, store, and cook various types of food resources. 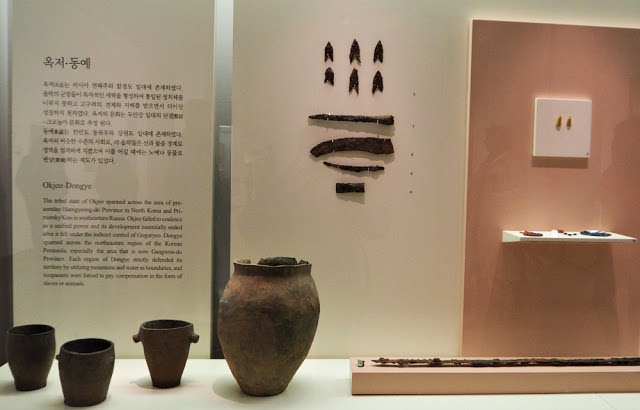 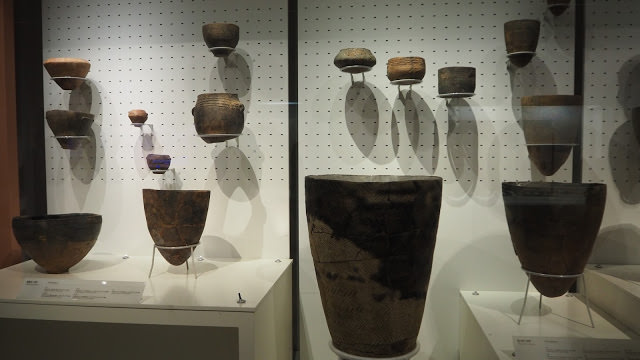 The exchange took place, not only with nearby areas, but also with distant regions, including Jeju Island, the Japanese Archipelago, Northeast China, and the Maritime Provinces of Russia.

In particular, the exchange between the Southeastern coastal areas of the Korean Peninsula and Kyushu, Japan, was actively carried out throughout the whole of the Neolithic Age.

Ornaments and Arts
Neolithic individuals began to adorn their bodies with bracelets, necklaces, and earrings as their lives became more settled in this period.

These ornaments and art objects were not only meant to express beauty, but also served religious or ritual purposes, or acted as symbols of social identity or status.

In northeast China and the Korean Peninsula, the Bronze Age began sometime around the 15th century BCE. Bronze Age settlers in the region made plain, undecorated pottery, ground stone tools, and wooden implements for everyday use.

In contrast, bronzeware was used to make ritual objects or items that symbolized the authority of the elite.

The development of agriculture, rice farming, in particular, led to the establishment of large settlements comparable to today's farming villages and, eventually, social stratification. 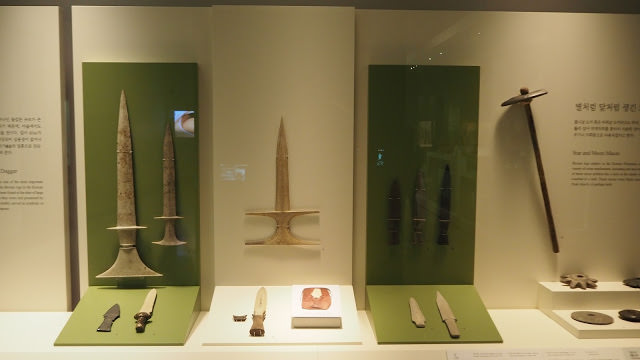 The symbolism of the Stone Dagger
Stone dagger (along with dolmens) is one of the most important archaeological remains representing the Bronze Age in the Korean Peninsula.

The stone dagger has only been found at the sites of large settlements and tombs, indicating that a privileged minority only possessed them. The knives probably served as symbolic or ritual objects, rather than as actual weapons.

The first state ever to emerge on the Korean Peninsula was Gojoseon (Ancient Joseon), which came to control the entire northwest region of the peninsula during the Bronze Age, stretching as far west as the Liaoning region of China.

Gojoseon was powerful enough to compete as equals against the Yan, Qin, and Han of ancient China.

Around the time of Gojoseon's downfall (c.108 CEB), several smaller states emerged and gained influence in its vicinity, including Buyeo, Goguryeo, Okjeo, and Dongye.

Meanwhile, to the south, the Samhan states (Mahan, Jinhan, Byeonhan) formed from the state of Jin, which had controlled the southern region of the peninsula for a long (though indeterminate) time. 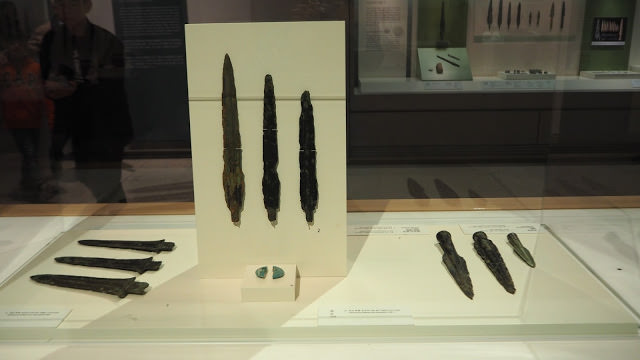 Korean-type bronze daggers are characterized by a nearly straight blade with a shallow inward in the middle.

In addition to the knives, this period also saw the emergence of new bronze ritual tools, such as mirrors with a coarse, linear design. 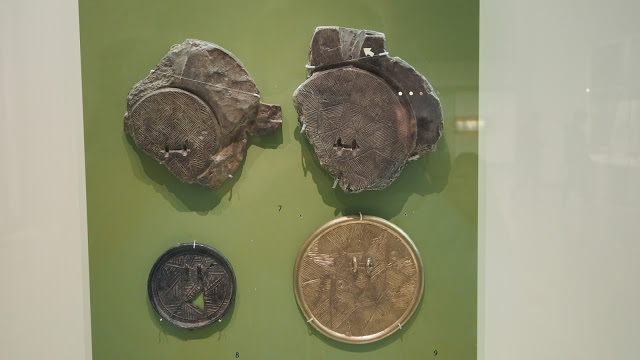 Social Development in the Southwest
With the onset of Korean-type bronze dagger culture, the dominant society of Gojoseon was soon joined by emerging states in the southwest region of the Korean Peninsula.

Korean-type bronze dagger culture developed well in the region south of the Cheongcheongang River, resulting in the production of bronze mirrors with a subtly linear design and bronze bells that exemplify the height of bronze craftsmanship of the period.

At that time, China was in the midst of its Warring States period, while Gojoseon and Yan were actively feuding with one another. Gojoseon's power soon increased with the introduction and development of ironware culture.

After the Bronze Age and the fall of Gojoseon (108 BCE), several tribes and confederacies emerged to take control of different parts of the Korean Peninsula and its surrounding areas.

Bueo and Goguryeo occupied northeastern China, while Okjeo and Dongye controlled the northeast region of the Korean Peninsula.

Bronze daggers and spearheads at the National Museum of Korea 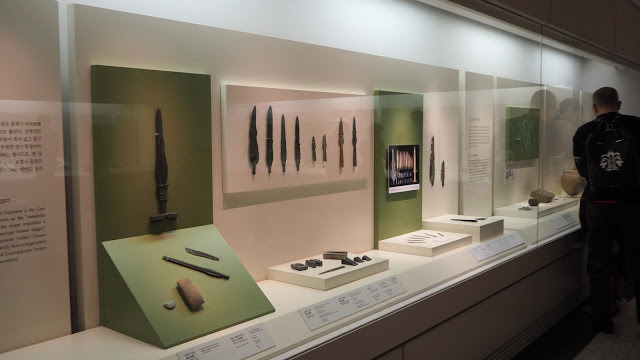 Bronze weapons and other daily items made during prehistoric ancient Korea.

Meanwhile, the central and southern part of the Korean Peninsula was divided between the confederacies of Mahan, Jinhan, and Byeonhan.

Hence, this part of Korean History is known as the Samhan Period. Buyeo eventually became part of the Goguryeo Kingdom, while Mahan, Jinhan, and Byeonhan were subsumed by the kingdoms of Baekje, Silla, and Gaya, respectively.

Around the turn of the Common Era, iron technology from Han China was introduced via Nangnang, and various iron implements began to be produced, including weapons, farming tools, and horse equipment.

By the 1st century CE, areas in the southern Korean Peninsula were developing iron technology in various forms and exporting iron commodities to neighboring regions such as Japan, Nangnang, and Daebang.

The use of iron implements brought about tremendous changes in the cultural, economic, and socio-political environment, and played a critical role in the development of ancient states.

Buyeo
The Buyeo Kingdom existed from the 2nd century BCE to the 5th century CE, and its vast territory most likely covered what is now Jilin Province in China.

However, the boundaries and center of the kingdom probably shifted frequently due to wars with neighboring states. The king ruled over the center while the local regions were governed by the officers of Maga, Uga, and Jeoga and Guga.

Okjeo and Dongye
The rival state of Okjeo spanned across the area of present-day Hamgyeong-do Province in North Korea and Primorsky Krai in southeastern Russia.

Okjeo failed to coalesce as a unified power, and its development essentially ended after it fell under the indirect control of Goguryeo.

Dongye spanned across the northeastern region of the Korean peninsula, especially the area that is now Gangwon-do Province.

Each region of Dongye strictly defended its territory by utilizing mountains and water as boundaries, and trespassers were forced to pay compensation in the form of slaves or animals.

Representative Burial of Nangnang
Burial items found in Tomb 9 at Seogam-ri included iron weapons, which had replaced bronze weapons, as well as a few farming tools. Other Lelang tombs contained horse equipment, and some miniature burial objects were excavated from a tomb in Jungwon.

Lacquerware and Accessories
Several lacquerware objects, including dishes and weapons, were buried in Lelang Tombs. Some objects were inscribed with the name of their producer and the date of production. Excavations indicate that both men and women probably wore bracelets and rings. 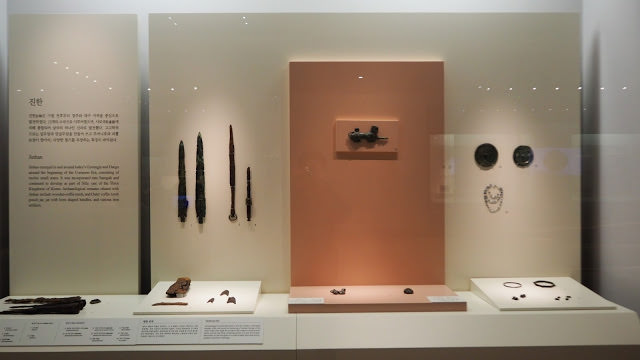 Mahan Confederation
Mahan was a confederation of 54 small states headed by the state of Mokjikuk, which existed in today's Hoseo and Honam Regions as well as the Midlands between the 3rd century BCE and the mid-4th century CE.

These items reveal that each area had developed its own native culture.

Cheongdangdong Excavation
Through the course of four excavation projects at the Cheongdangdong site, archaeologists discovered a total of 22 tombs with wooden stands, as well as mounds enclosed by a U-shaped ditch. 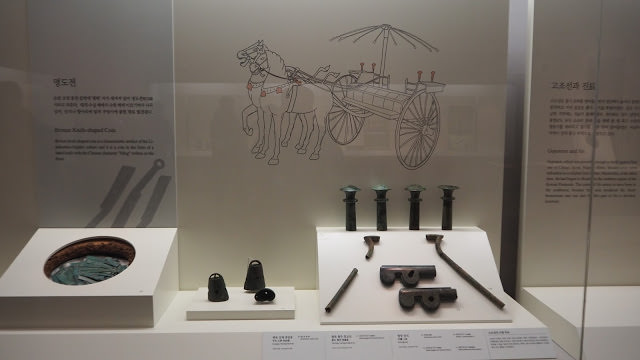 Jinhan
Jinhan emerged in and around today's Gyeongju and Daegu around the beginning of the Common Era, consisting of twelve small states. It was incorporated into Saroguk and continued to develop as part of Silla, one of the Three Kingdoms of Korea. 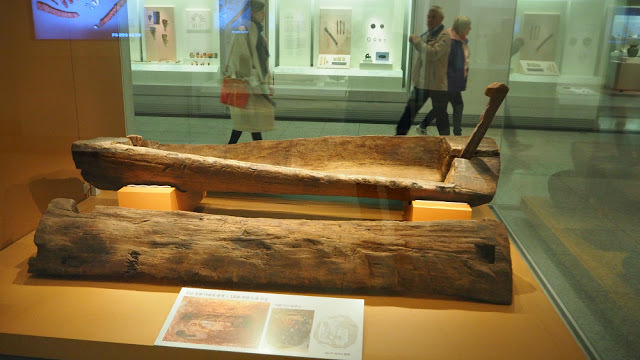 Byeonhan
One of the Samhan States located between Mahan in the west and Jinhan in the east; Byeonhan consisted of twelve small states, including Guyaguk, located in today's Gimhae area. It was also called Byeonjin, and many of its "states" were later incorporated into the Gaya Confederation. Byeonhan was famous as the region's major exporter of iron to Chinese commanderies and Japan.

Dahori Site
This gravesite built for a political leader of Byeonhan unearthed a log coffin, and a storage pit dug under it to store a variety of funerary objects.

The items include iron farming tools, weapons, lacquered vessels used for ritual purposes, and food offered to the spirits at the funeral.

Settlers around the lower reaches of the Nakdonggang River exported iron to Nangnang and Wae and imported various objects from China and Japan.

Such exchanges became more active with the development of iron culture, which promoted social change and improvement. 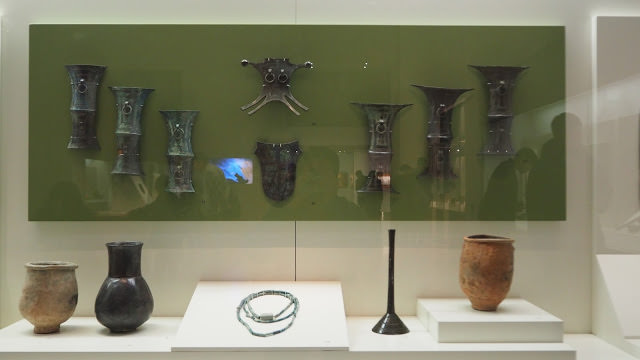 Religious Festivals of Mahan
They hold rites to the spirits of the dead after the sowing season in the 5th month of the year. They gather together, sing, dance, and drink, night and day.

When they dance, several tens of people stand up at a time, follow each other, repeat stamping the ground with their body bending, and beat time with their hands and feet.

The music they make sounds very much like that formed at the rattle dance. They perform the same dance after harvest in the 10th month.

Written Characters
At Tomb 1 of the Daho-ri site in Changwon, archaeologists uncovered brushes and a small knife from a bamboo basket that was buried beneath the coffin.

The brush and knife seem to have been used to write and erase characters on strips of wood or bamboo.

The discovered artifacts also included four copper rings that likely served as weights, indicating that, in addition to written symbols, the ruling class of the Samhan society also used weights and measures. 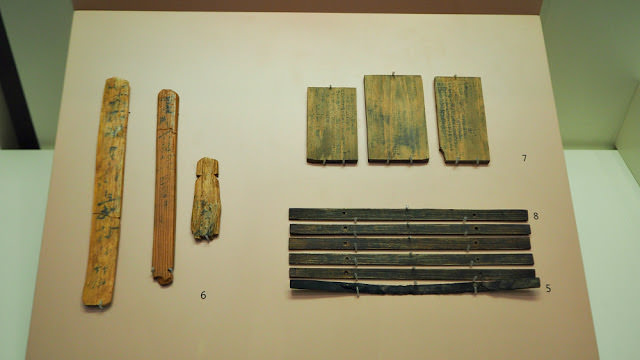 Replicas of artifacts uncovered in Daho-ri site in Changwon's Tomb1

Getting to National Museum of Korea

You can see more artifacts made during the prehistoric ancient Korea at South Korea's national museum. Yes, they are exciting and entertaining as well as educational.

The museum is huge and houses thousands of ancient artifacts, both donated and excavated after many decades of work and research.

Thanks for visiting this page!