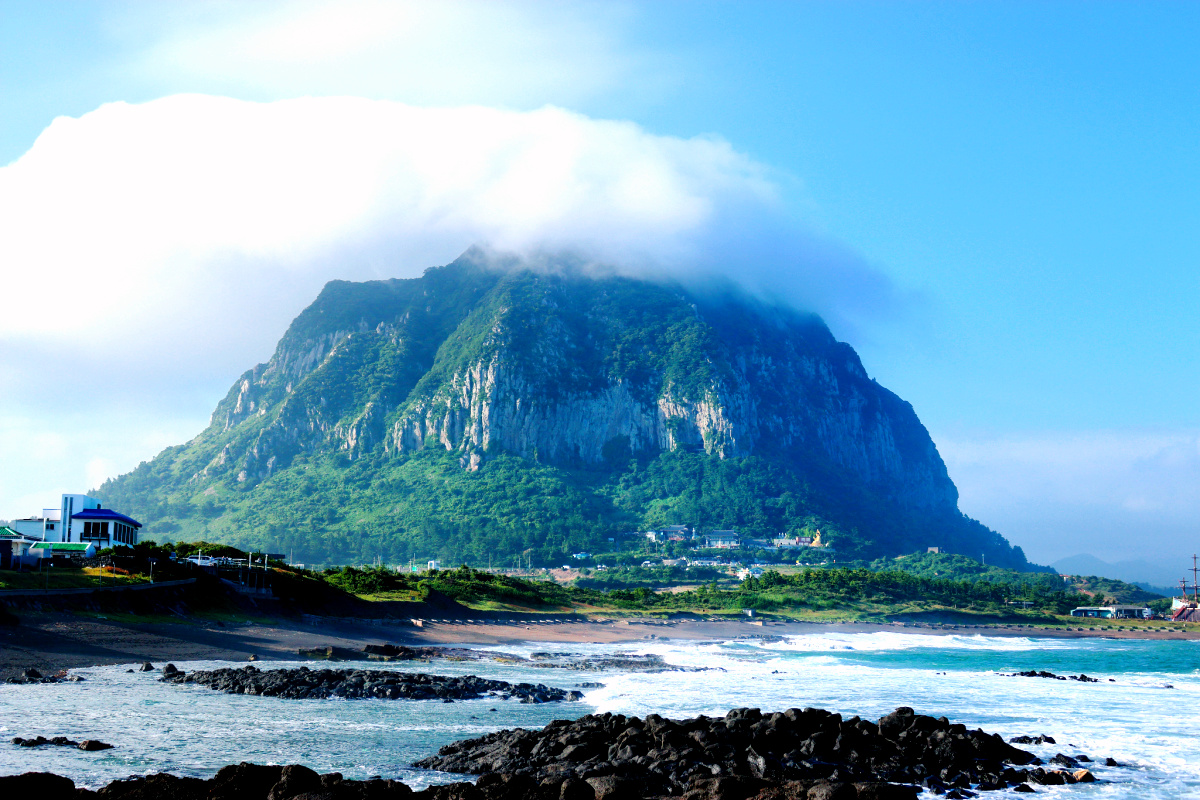 Sanbangsan Mountain is a famous mountain in Seogwipo City, being visited by thousands of travelers and locals annually.

Besides its beautiful nature, you will surely enjoy the spectacular views of Jeju Island's surrounding sights--blue sea, islands, Hallasan Mountain, valleys, towns, and stretches of beaches.

Sanbangsan Mountain is a lava dome connected to the sedimentary layer of the Yongmeori Coast on the coast of Sagye-ri, Andeok-myeon in Seogwipo.

It is a bell-shaped thalloid (alga or fungus) that stands tall in southwest Jeju Island's plains, allowing it to be seen anywhere in the area. It is encircled by Ilju Road, which connects Moseulpo Port and Hwasun-ri.

Due to its relatively tall height and proximity to the coast, Sanbangsan Mountain will often have clouds hanging or swirling around its summit. The edge of each face of the mountain will show wildly diverging climate characteristics.

Such climates make it a vital sanctuary for vegetation, especially as it grants its native plants unique traits due to its volcanic environment.

In particular, rare plants such as Centipede's foot orchid and Glabrous Korean boxwood, which are rock wall plants, grow on the rock face, leading to the mountain being designated and protected as Natural Monument 182-5.

According to research, over 70 families, 180 genera, 200 species, 30 varieties, and one subspecies of vascular plants totaling 255 species make their homes in the Sanbangsan Mountain.

Canola flowers in bloom at the foreground of Sanbangsan Mountain

Sanbang refers to a cave within a mountain, and Sanbangsan Mountain derives its name from the fact that there is a sea cave located around 150 meters above sea level on its southern face.

Sanbangsan Mountain was born out of a violent volcanic eruption going back from 700,000 to 800,000 years ago. The mountain itself proves that it is, in fact, a massive body of lava.

The cliffs on the southern side of Sanbangsan Mountain features a wide variety of curious formations such as weathering pits and talus scree slopes, some of which are over two hundred meters high. 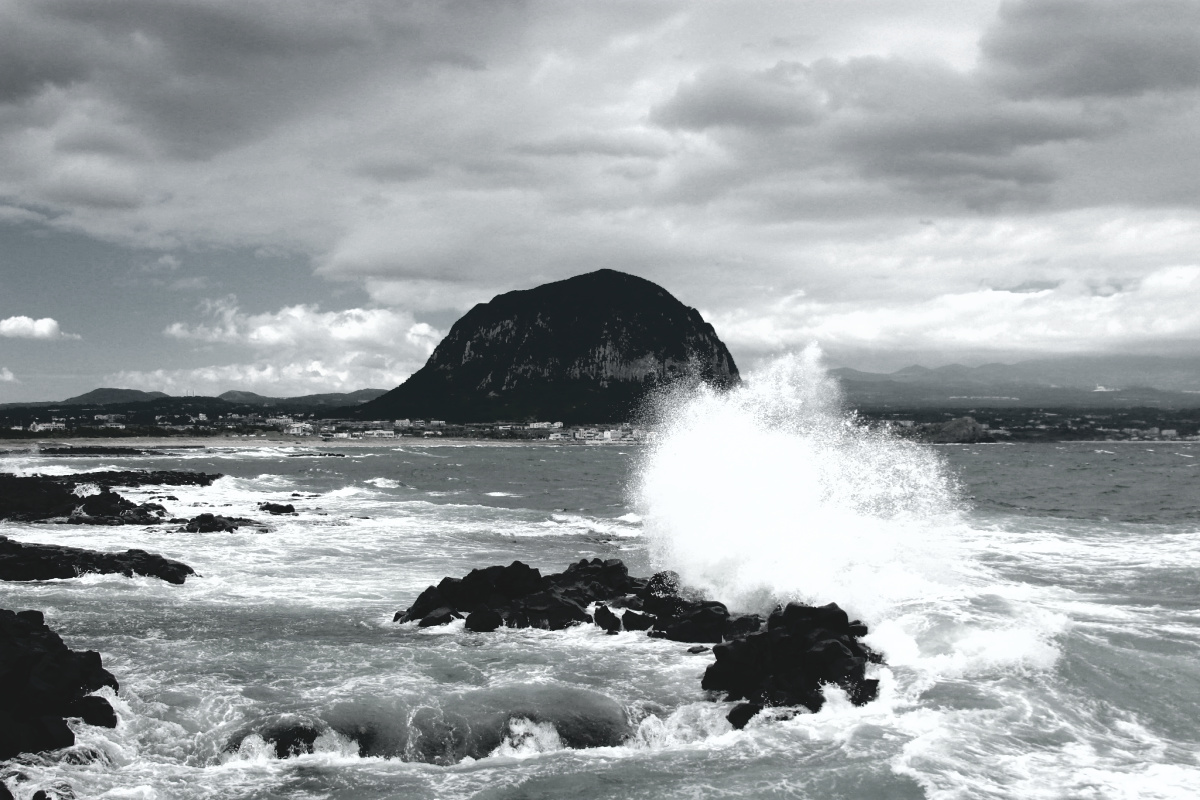 The name 'sanbang' means 'a cave inside a mountain.' This name implies that this mountain contains a cave, which is actually located about 150 meters above sea level. Being in that position certainly offers a spectacular view of the blue ocean and its distant islands.

Due to its proximity to the sea and its high elevation, the peak is often ringed with a white cloud. The mountain's upper slopes have their distinct climatic conditions that offer the best environment for various plant and animal species making their home.

Because of that biological condition and natural value, the government ensures that the area is protected and monitored for botanical research.

The Sanbangsa Cave Temple and the Bomunsa Temple, which safely houses the relics of Buddha, are also located on the mountain of Sanbangsan.

You will find the Sanbanggulsa Grotto as you walk along the stone-steps between the two temples. 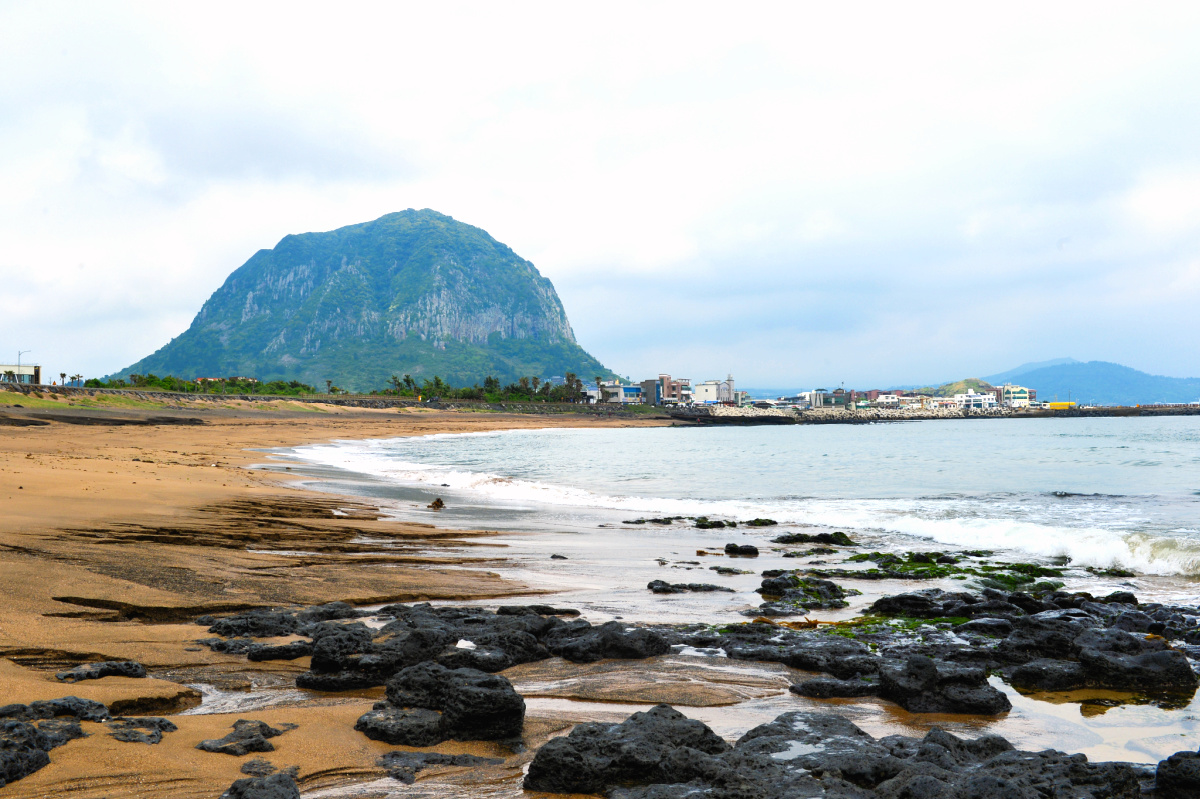 Beach view as the foreground of Sanbangsan Mountain [산방산]

Another exciting thing you will find nearby is the signal beacon called 'Yeondae' in Korean stands at the roadside in front of the mountain. This signal beacon was used in the past to fire and smoke to relay urgent messages, such as incoming invaders, typhoons, and other emergencies.

The more popular 'Bongsudae' has almost a similar function with 'Yeondae' as a signal beacon.

Thanks, and that's all at this point. I hope that's useful.
Enjoy your travels and be safe!

Getting to Sanbangsan Mountain

It takes an hour and a half to get there by bus from Jeju City.

Taxis can also bring you there or to your accommodation. Just make sure you have the right address in Korean language if you don't speak the language.

Thanks, and that's all at this point. I hope that's useful.
Enjoy your travels and be safe!