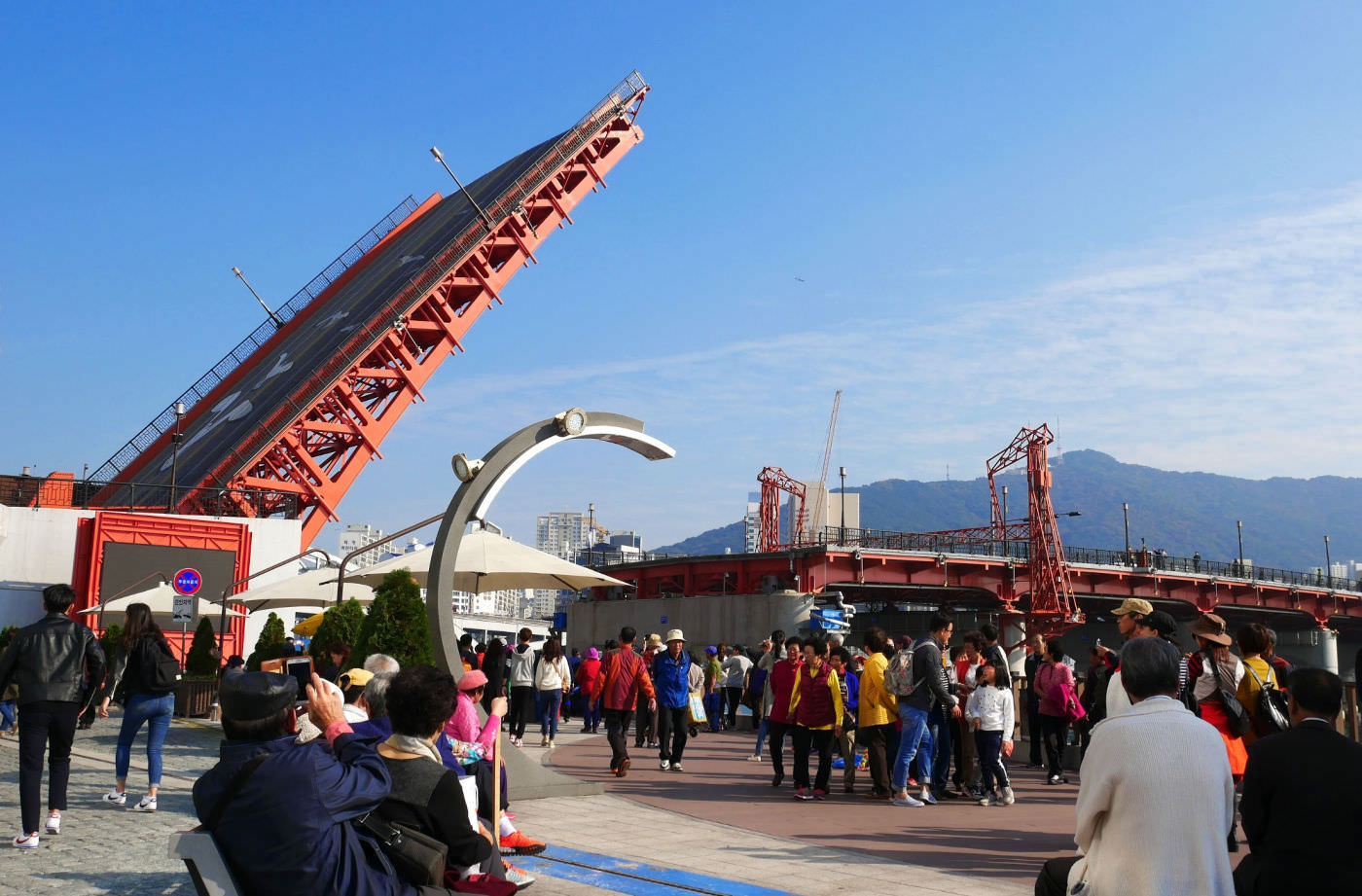 Yeongdodaegyo rises to let the ship pass through

Yeongdodaegyo Bridge, also known as Yeongdodari, is a bascule bridge (draw bridge or lifting bridge) in Busan City. Similar to this bridge is the famous London Bridge in England.

As a bridge linking the two districts, Yeongdodaegyo is the first one that bridges the mainland and an island in Busan City.

Its old history and the first of its kind makes it a place worth your visit. It is very rare these days to see an old bridge. So, you can take a souvenir selfie or groupie with friends with Yeongdo Bridge as your background.

Why Lift the Bridge

A drawbridge (or draw-bridge) is a kind of moveable bridge typically built at the entrance to a castle surrounded by a deep ditch (moat) in ancient times, such as in England.

So, what's the function, or what is the Yeongdodaegyo for? Unlike most of the medieval castles' draw bridges, Yeongdodaegyo was not designed to be destroyed or removed in the event of an invasion.

The drawbridge in London rising to let the ship pass through

Yeongdodaegyo Bridge's drawbridge function is for taller boats or ships that pass through it.

Yeongdodaegyo allows ships to pass between Busan's busy south and north ports. The bridge is drawn from two to seven times a day, depending on the number of vessels that pass through it.

As a landmark of Busan, this old drawbridge still attracts people who are fascinated by its movement. This bridge drew the locals to the area when it was first constructed to watch the rising spectacle with the bridge pointing up to the skies. They still do these days!

Watching the Rising Spectacle
The area around the bridge is open all year round. It means that you can observe the lifting of the bridge wherever you feel comfortable nearby.

Regularly, Yeongdodaegyo Bridge is lifted from 2 PM to 2:15 PM once a day. However, it is also done whenever a ship passes under it.

If you wish to explore and experience more local and cultural aspects of Busan, you can check out the following tourist attractions as well.

Samjin Fish Cake History Museum
Samjin Museum is located in Yeongdo District, Busan City. If you haven't heard yet, Busan is famous for its fish cake products. This factory is the leading producer of fish cakes and the oldest ones in the city. Fish cakes are refreshing snack products.

Yongdusan Jagalchi Special Tourist Zone
You will experience the varied traditional markets and culture of Busan in the area. It is located in Jung-gu District as a tourist zone in the city center. Nearby is the famous Yongdusan Park, which is reachable via escalator.

40-step Culture & Tourism Theme Street
This cultural and tourism street lies at one end of the 40-Steps Culture & Tourism Theme Street in Busan City. It is a tourist attraction aimed at recalling a part of the Korean War when the refugees gathered around the area. The 40-steps is known to be the location among refugees who longed to get reunified with their families and friends during the war.

Busan Trick Eye Musem
Located in Jung-gu District, Busan City, Trick Eye Museum is an exciting entertainment artistic facility. It offers 3D (or three-dimensional art) art experience for people of various ages. You can watch the 3D paintings from famous painters (not originals) and can be part of the artwork if you wish to have your photos taken with any of them.

Certainly, there are more attractions located nearby the Yeongdodaegyo Bridge area. Now, let me introduce possible accommodations in the area, which are recommended by people who have stayed there.

Central Park Hotel
This inn/motel accommodation facility is located in Jung-gu District, Busan City. It is in between Jungang Station and Nampo Station of Busan City's subway system. This 15-story building offers over 60 guestrooms with great views of the city.

Busan Tourist Hotel (부산관광호텔)
This tourist hotel is also located in Jung-gu District near Yongdusan Park, Gukje Market and other attractions surrounding it. Busan Tourist Hotel was first opened in 1974, making it one of the oldest hotel that is serving travelers to Busan City for over 50 years and counting.

Toyoko Inn Hotel - Busan Station 2
Toyoko is a tourist hotel located in Jung-gu District, Busan. It is a Japanese hotel chain with hundreds of franchises around the world.

Now, let me finish this article with a guide on how you can get to the Yeongdodaegyo Bridge area. The next subsection does so with useful details on transportation and inquiry contact details.

The exact address of Yeongdodaegyo is below...

By Busan Subway
Take the subway Line 1 and get off at Nampo Station. Go to Exit 6 or 8.

By Taxi
If you are in a hurry to reach on time or to come more comfortably, you can call a taxi to bring you quickly. Compared to other cities in other countries, the taxi fare in South Korea is inexpensive.

I hope this article is helpful. Please, share or like if you do. Have an incredible journey, and stay safe!