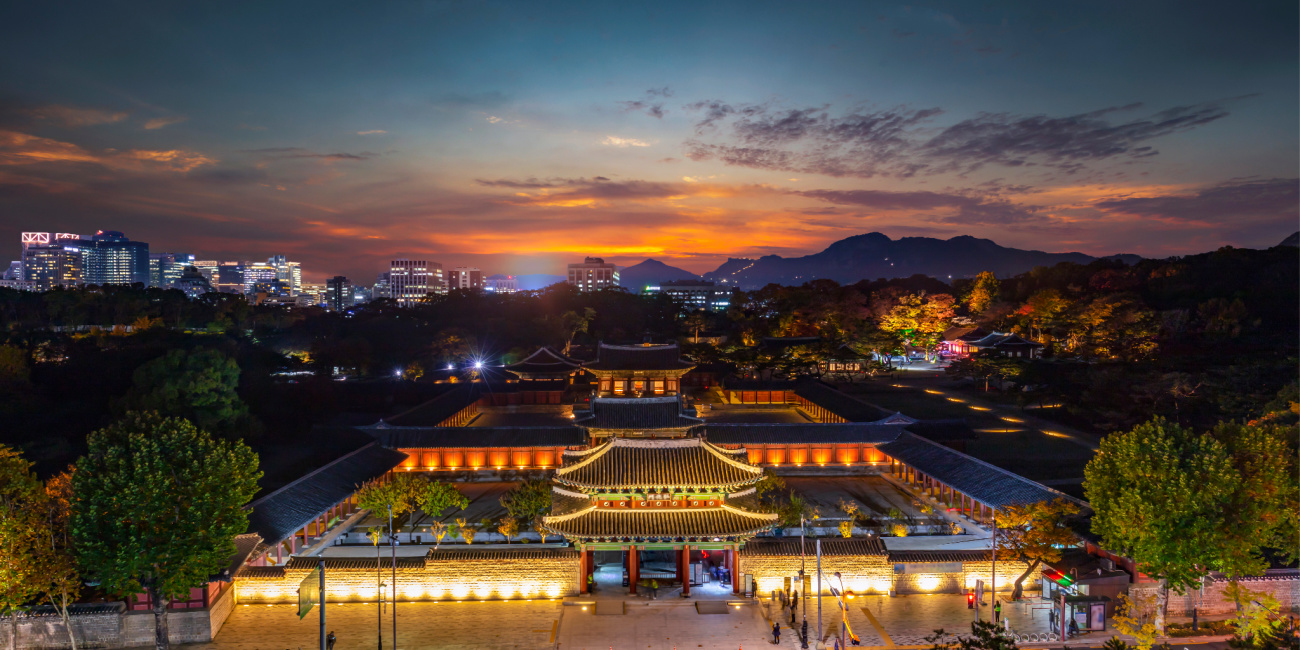 Changgyeonggung Palace is one of the four grand palaces located in Seoul, South Korea. It is one of the best attractions in the capital city and can be reached easily anywhere you stay in Seoul.

The palace served as the retirement palace for Sejong's father, King Taejong. It also served as the quarters for queens and concubines of the king.

During the reign of King Seongjong (1469-1494), the palace was renovated and given its new name Changgyeonggung Palace.

During the Japanese occupation early in the 20th century, Changgyeonggung was turned into a park with a zoo and a botanical garden.

Returning to its original function as a palace did come until the restoration was completed in 1983.

Inside the renovated and now famous Changgyeonggung Palace, you will see and enjoy lots of structures and spaces inside.

Honghwa Gate
It is the main entrance gate of Changgyeonggung where visitors can enter. Passing this gate will lead you to the Okcheongyo Bridge.

Okcheonggyeo Bridge is an arch bridge made of granite stones over a pond or stream, which is common in most Joseon Dynasty palaces.

Crossing over the bridge, you will pass through the Myeongjeongmun Gate, and inside it, you will find Myeongjeongjeon (a hall). This hall is the Joseon king's office and the oldest one among the dynasty's palace offices.

One feature you should know is that all the houses face southwards except Myeongjeongjeon, which faces East.

As required by Confucian belief and practice (the common religion during the Joseon period), gates must not face the South because the royal family's ancestral shrine is located in the South.

Status Stones
At the central yard of the palace, you can see stones with carved names on them with the status of the official. Each official sits in front of each stone during special ceremonies or events facing the king facing towards them.

Sungmundang
It is a building located behind the Myeongjeongjeong on its upper left side. This building is nicely built on the slope of the mountain.

Tongmyeongjeon
Tongmyeongjeon was created especially for the queen. It is the largest structure in the whole palace area. One of its remarkable features is the delicate details you can observe in all parts and corners of the building.

Walking up the stone steps passing the Tongmyeongjeon, you will find the Jagyeongjeon. On Jageyongjeon's Southeast direction, you will see the Punggidae, an instrument for measuring the wind's speed and direction.

Going towards the North, you will find Chundangji, a massive pond in the palace. It is said that half of the pond was used by the king as a rice field. When the Japanese came, they turned them all into a pond with floating ships.

You should also notice an old botanic garden located above the pond, which still functions as is.

Changgyeonggung Palace is open six days a week except on special holidays and every Monday.

It is open from 9 AM until 9 PM. The last admission time is an hour before the closing time.

You can park in its parking area with over 30 parking spaces only. The parking area is paid space. Around USD2.00 is collected for every two hours and half of that for a 30-minute parking time.

Admission Fees Rates
Please know that admission into this palace is not free. The collection of fees is necessary for the upkeep and maintenance of the palace area and its structures.

You can pay around USD1.00 and a bit of a discount for a group of 10 members for an adult.

Youth and children should pay less than a dollar to enter as well. You may enter for free if you visit wearing a 'hanbok' (Korean traditional clothing).

Restrooms are available, free of charge, in some designated areas within the palace.

Getting to Changgyeonggung Palace

The best way to get there is by public transport. Driving a car is not advisable due to traffic congestion issues, especially in that part of the city.

By Subway
Take Seoul Subway Line 3 and get off at Anguk Station, then come out from Exit 3. Proceed towards Yulgok-ro (road) for about a kilometer and turn left to Changgyeonggung-ro. Continue walking for about 300 meters to find the palace's entrance gate to your left.

By Bus
Many buses crisscross the palace area. The buses below will ferry you to the stops at Changgyeonggung Palace and Seoul University Hospital Bus Stop.