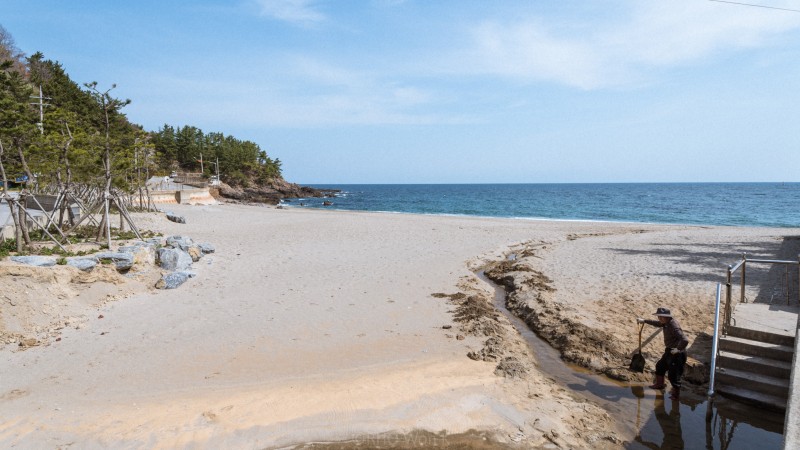 Gopo is particularly receiving more visitors from all over the country during summer. Most visitors enjoy their time and feel the worth of their holiday.

The weather in the area is pretty good during the peak summertime but could be very unpredictable after summer. However, you will surely cherish the unique environment and serene views around.

Gopo is one of the great beaches in Samcheok to spend the summer holidays. The other famous beaches include Samcheok Beach, Galnam-ri Beach, Wolchon Beach, and some more.

The months of June and July are the peak summer season, and when they are usually packed and crowded.

However, the months of August and September could also be best because there is less crowd, but the weather can be chilly as Gangwondo gets cooler earlier than other provinces in the country.

If you love the beach for its sight and the relaxing sea, you will enjoy the serene and natural but colder months in December, January, February, and March.

They say that you can't hear the usual barking of dogs. So the village itself decided not to keep animals to make a clean and quieter village. With the village as the center, the sea in front, and mountains in the back, it is a typical Baesan forest topography.

You may recommend it to a friend or family member looking for a "quiet" fishing village with mountains and sea as a summer resort to rest while listening to the sound of the waves.

Gopo Village is also famous for the Dol seaweed. The seaweed grows wild in the crevices of the rocks in the clear jade-colored water three to four meters deep.

Haenyeo (women divers) from the nearby Hosan area (there are no haenyeo in Gopo Village) dive and pick each one by hand. Villagers make a living by harvesting seaweed in early April every year, picking sea urchins and abalones from crevices in the rocks, and receiving guesthouses from summer vacationers.

So, you will notice the front gates of each house with signs: "Dol seaweed for sale, and it is a guest house."

Gopo villagers are very proud of Dol seaweed and promote the healing effect of seaweeds. A story told about a 74-year-old woman who lived in Seoul but moved to Gopo. Her health was failing due to her stomach problems. So the old woman started eating the seaweed so that others could see her sleeping with the seaweed in her mouth.

The woman did not know what kind of stomach problem she has but notice that the pain disappeared and claimed that eating the seaweed healed her stomach problem.

A bamboo wire fence is laid along the coastline except for the small Mongdol Beach in front of the village. But it is open during the summer vacation season.

Although it is cumbersome to pass through the beach through barbed wire, it is also a place that has been preserved as it is in its pristine nature as few foreigners are visiting it.

Because of this, you can see the seaweed growing and the fish playing in the clear jade-colored water that is different from the blue sea of ​​the East Sea.

The water is clearer and more transparent than the coral island in Pattaya, Thailand, which Koreans visit the most in summer. There are a lot of rock formations everywhere, so many anglers visit there.

A 5-minute walk from Gopo to Hosan Beach area will bring you to the breakwater, where the villagers mainly fish. Various fish species, including black sea bream, are caught as the first-class point around the underwater looking north from the end of the breakwater.

Wolcheon Beach, right next to the breakwater, is a sandy beach suitable for families to pitch a tent and rest.

Gopo Village is like that. There is a calm, clean and transparent jade sea, so if you really want to relax, you will definitely want to come.
Source: Travel Sketch (http://www.ktsketch.co.kr) 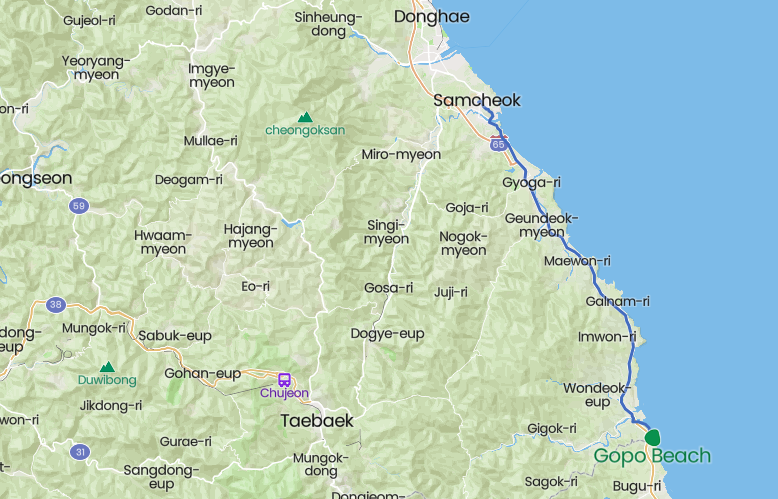 It takes 45 mins. from Samcheok City to Gopo Beach by public transport.

Getting to Gopo Beach

Getting there is quite easy as you only need to take the main road. It is easier if you drive a car or hire a taxi.

A couple of buses also pass the direction but only a few times a day.

It takes around 40 to 50 minutes to get near the beach area.

Thanks for reading and have a wonderful day. Safe travels!