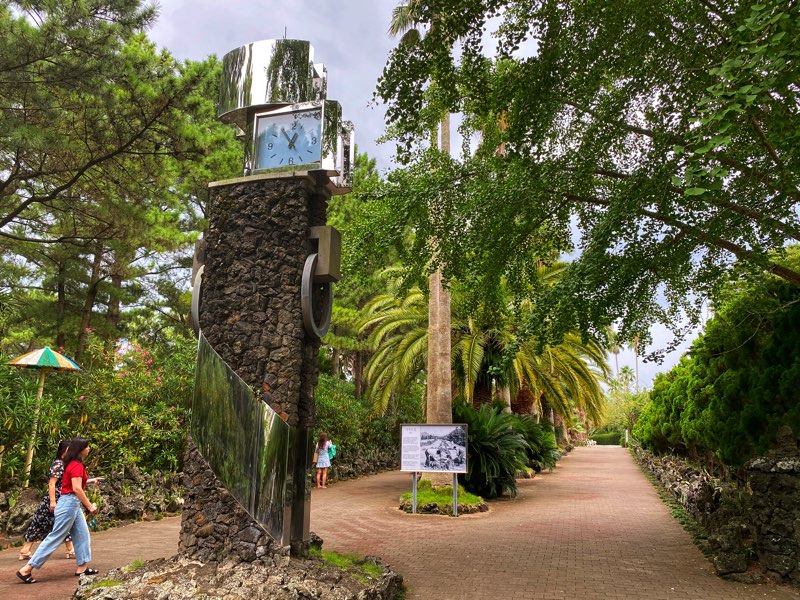 The tropical sight of Palms Avenue at Hallim Park

Hallim Park (한림 공원) is a famous nature and cultural park on Jeju Island. The park is perfect for travelers or guests looking for various plant species in one safe and entertaining place.

It was my first trip to this park, and I wished that I had more time to fully explore and enjoy every item, corner, features, and everything there is to be seen.

Although I came for some reasons, I could say that it is one of the places you should see when you travel to this corner of Jeju Island.

Hallim Park is established in early 1971, located around 33 kilometers West of Jeju City and Hallasan Mountain near Hallim's beach area.

The area where it is set up used to be an empty and barren land with nothing grows. With hard labor and determination, it turned to be like at present by pouring the whole area with tons of soil. 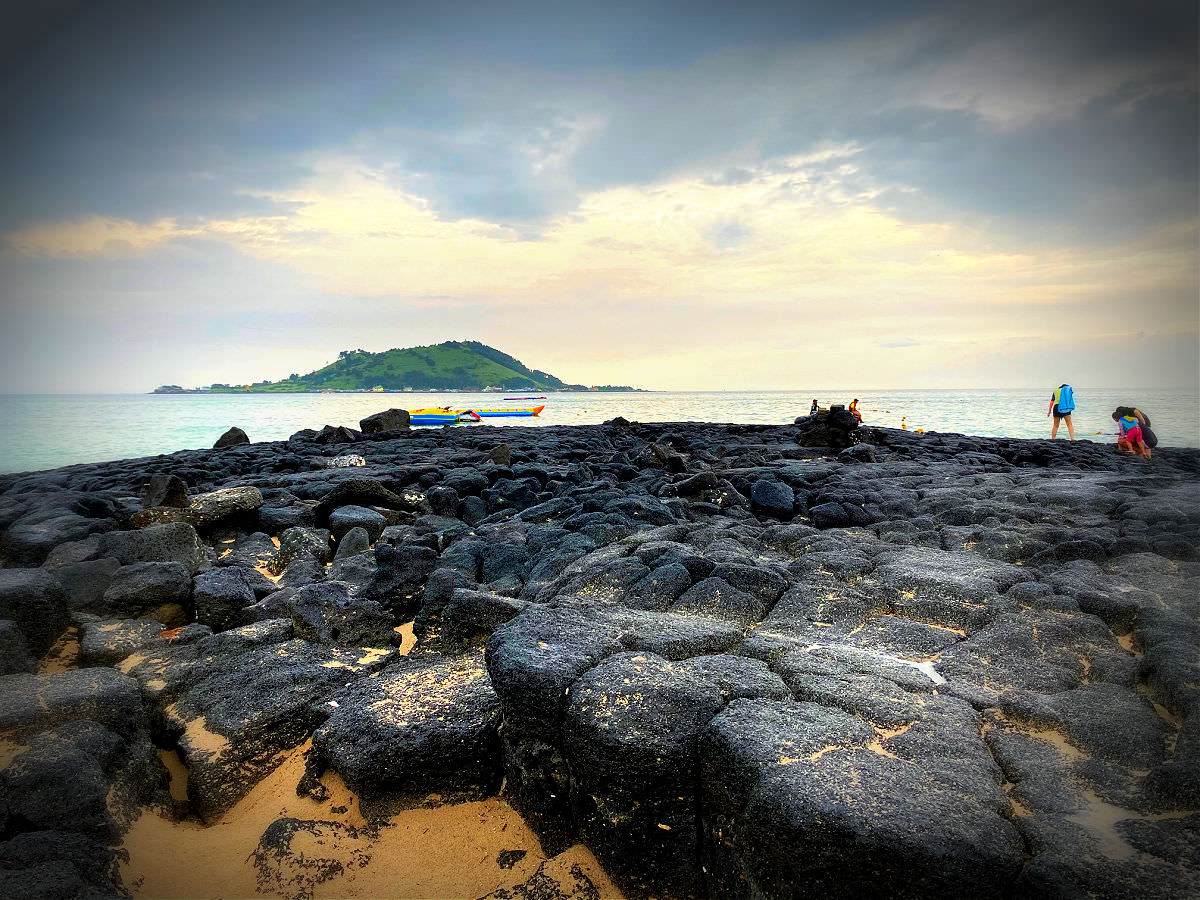 The big plus when you visit Hallim is that you can also enjoy the famous nearby beaches--Hyeopjae Beach and Geumneung Beach--and enjoy the view of Biyangdo Island facing it.

The park not only supports the plant species but also has natural sites, including the two caves: Hyeopjaegul and Ssangyonggul caves.

These two caves are famous for their two-dimensional features, which are believed to be the only cave in the world with such descriptions.

You can also enjoy the traditional Korean folk village, a children's amusement park, and outdoor entertainment facilities for all guests of various age levels.

If you are in a hurry, you can just explore the whole place in around two hours. But taking the time and trying to relax is highly recommended to enjoy the park.

Song Bong-kyu started the whole project by creating a palm nursery and started growing the palms until they were ready for planting. The hard work bore fruit as it makes the park one of the most famous destinations on the island. 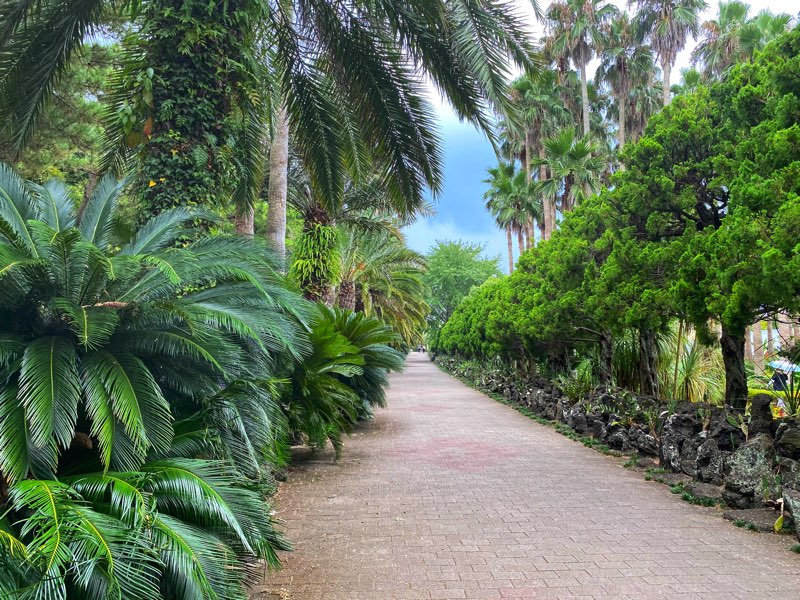 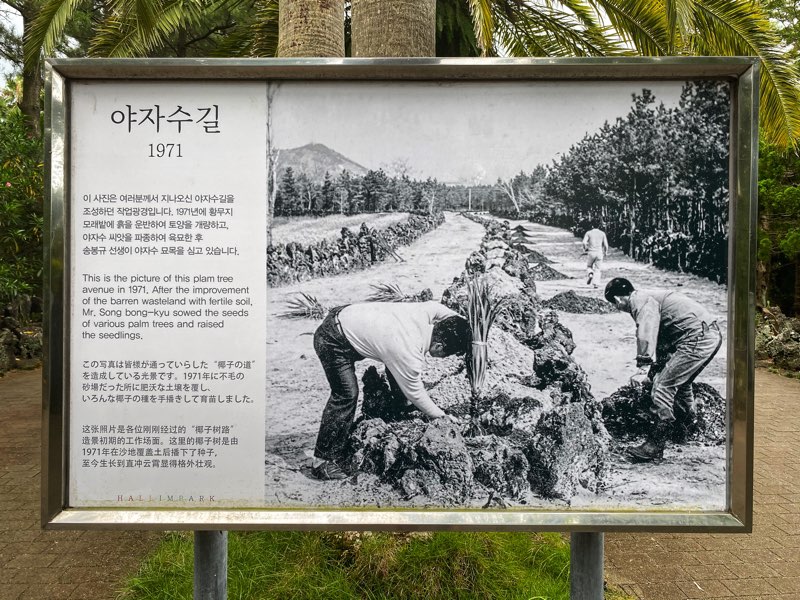 The wild grass and flowers are fantastic to watch during the Summer season. They are excellent when in full bloom - green and colorful grasses and beautiful flowers with green backgrounds.

One can spend time sitting on a bench or grassy part of the garden while enjoying the garden's atmosphere, surroundings, and refreshing breeze. 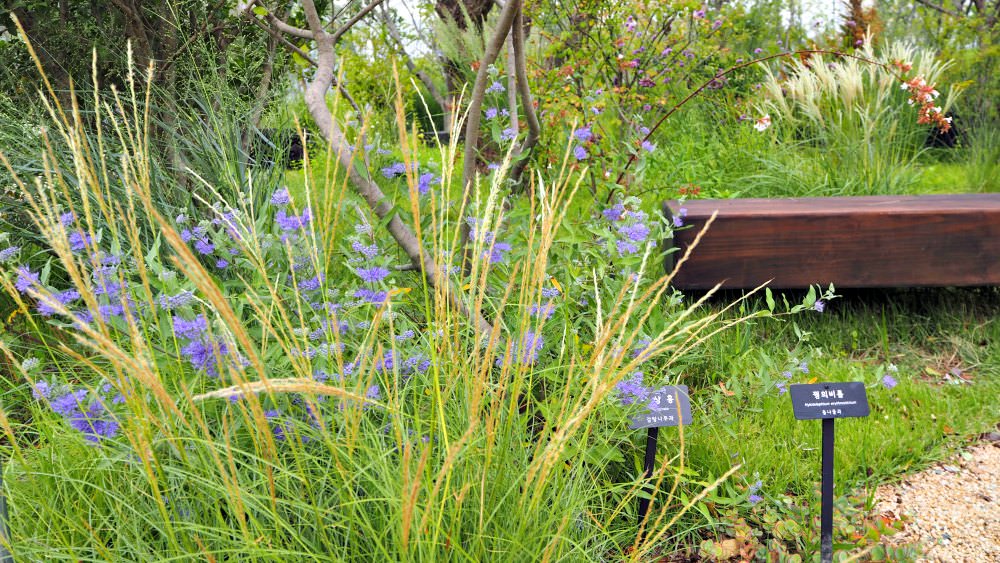 Let me describe a bit about Hyeopjae Cave first. Hyeopjae Cave is a beautiful cave that is somehow connected to Ssangyong Cave. It has exciting features, including the forms of rocks and flowing lava walls, among others. The floor is covered with bricks for safety and comfortable exploration inside.

The inside is bright enough for visitors to see the cave walls and cave ceilings. It was hot outside, but I felt relieved and explore longer, enjoying the much cooler temperature inside. It would take from 30 to an hour to enjoy the two caves. 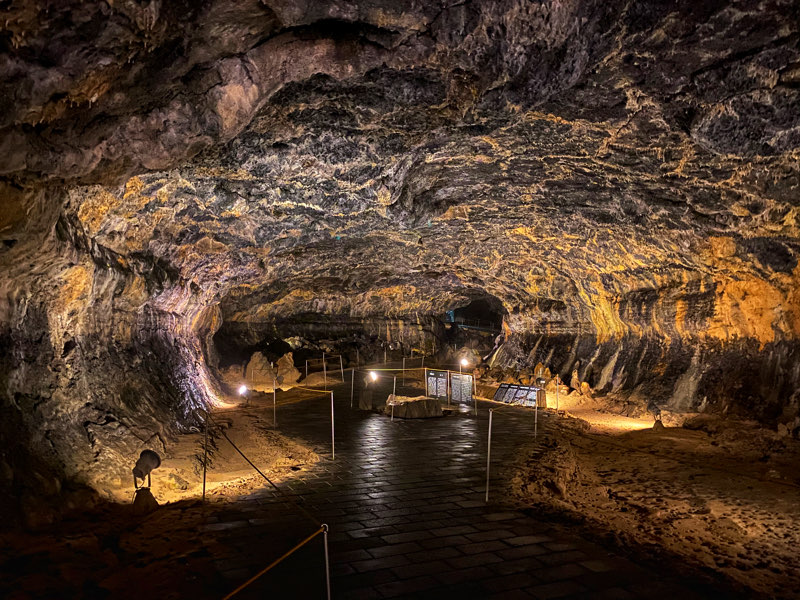 Ssangyong Cave
Ssangyong means two dragons in Hanja characters. It is named this way due to the shape of the cave likened to two dragons. The cave was formed when Mount Halla erupted thousands of years ago.

They say it is unique, being that a lava cave and a limestone cave are connected. One can see stalagmites and stalactites inside.

The rain melted the shells that cover the cave's entrance and formed limewater. The limewater that sipped into the cave transformed the lava into golden limestone cave walls.

The lava's flow inside can be seen through its hardened form. Some proofs that the cave was once under the sea are the fossilized shells and related sea animals. Furthermore, a survey conducted shows that the lava cave system in the area is consists of around 20 caves totaling 17,000 meters long. 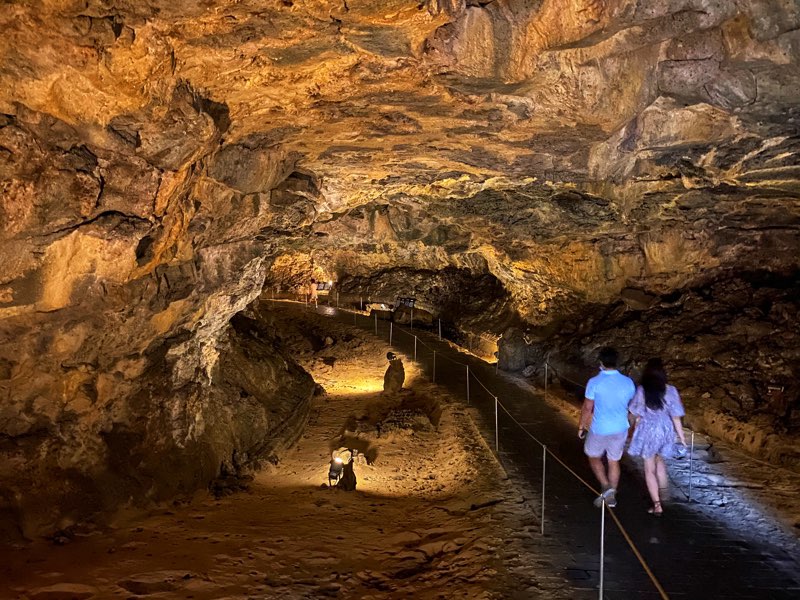 A couple exploring the cave

This area is one of my favorites. I love bonsais and rocks of various shapes. The bonsais are not only 'trees' but also fruit trees, including apples and pears.

The rocks are from various rock types or elements. The more interesting 'rock' type I found is the lava rocks. Well, they are not 'really' rocks, but lava spewed out from Mount Hallasan thousands of years ago.

The shapes of lava rocks are exciting to see. 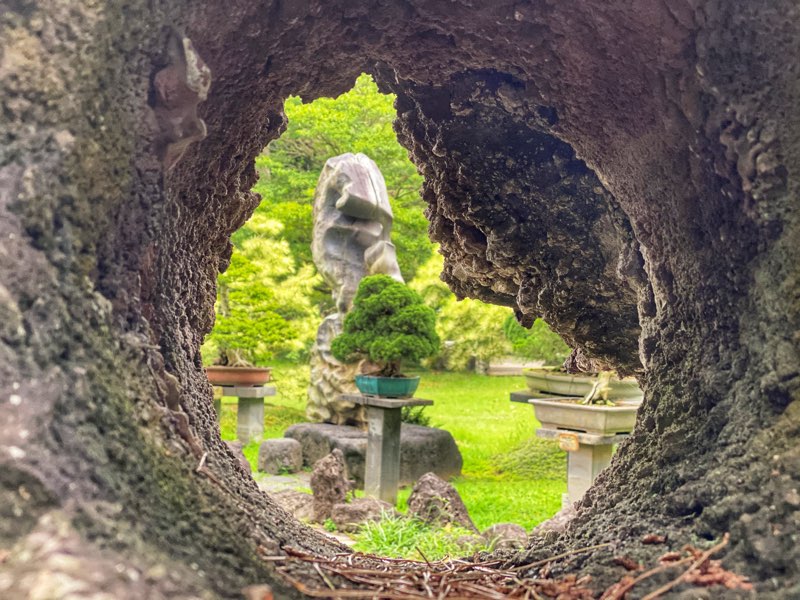 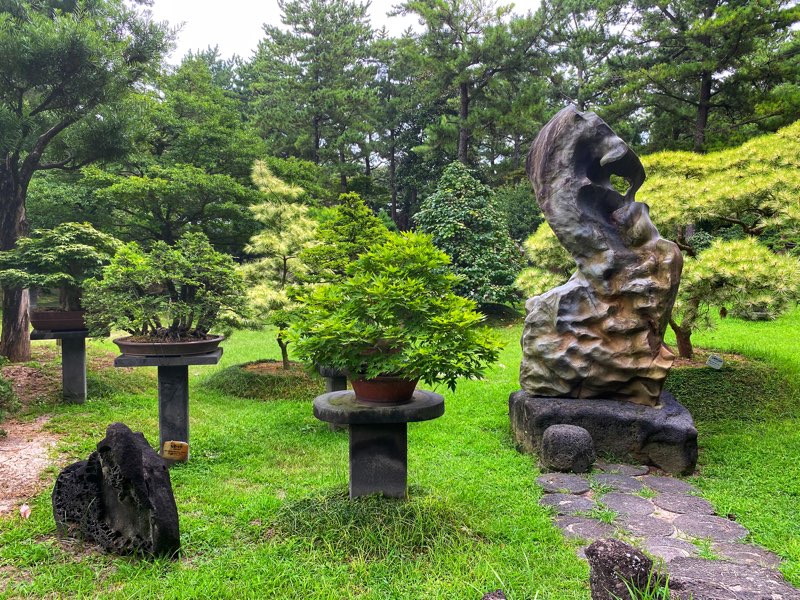 A horse-shaped rock and bonsais

The thatched-roof houses on Jeju Island used to be common structures around Hallim-eup, Kujwa-eup, and Aewol-eup in Bukjeju County. The houses here were relocated and preserved from those areas.

The roof of these houses is specially made in such a way that it would not be easily blown away by the strong winds and that it could keep that temperature inside the home somewhat the same at any time of the year. 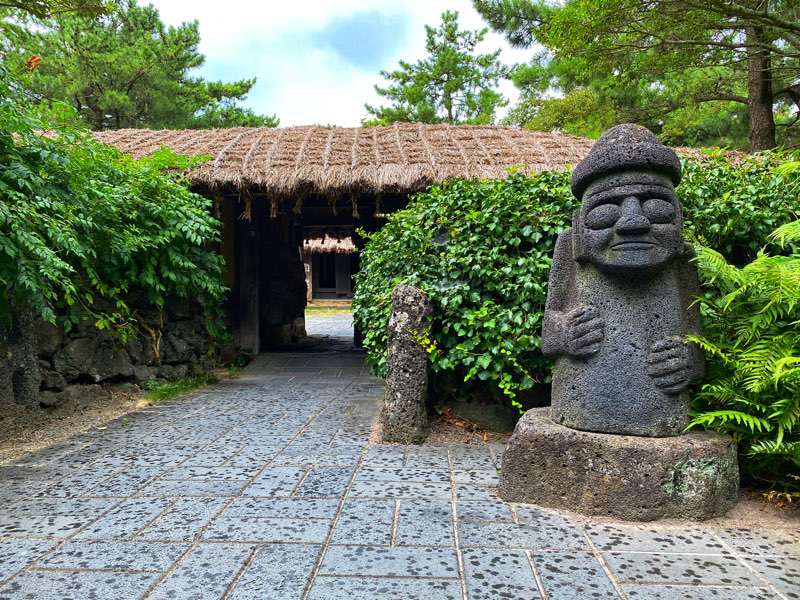 When I reached this area, I was greeted by a peacock. Some of them seem to be freely roaming around. Most of them are inside the cages. I noticed that they are separated by color.

Other bird species with beautiful colors, such as the Budgerigars and ostriches, are observable. Due to time constraints, I was not able to explore further the area. Next time! 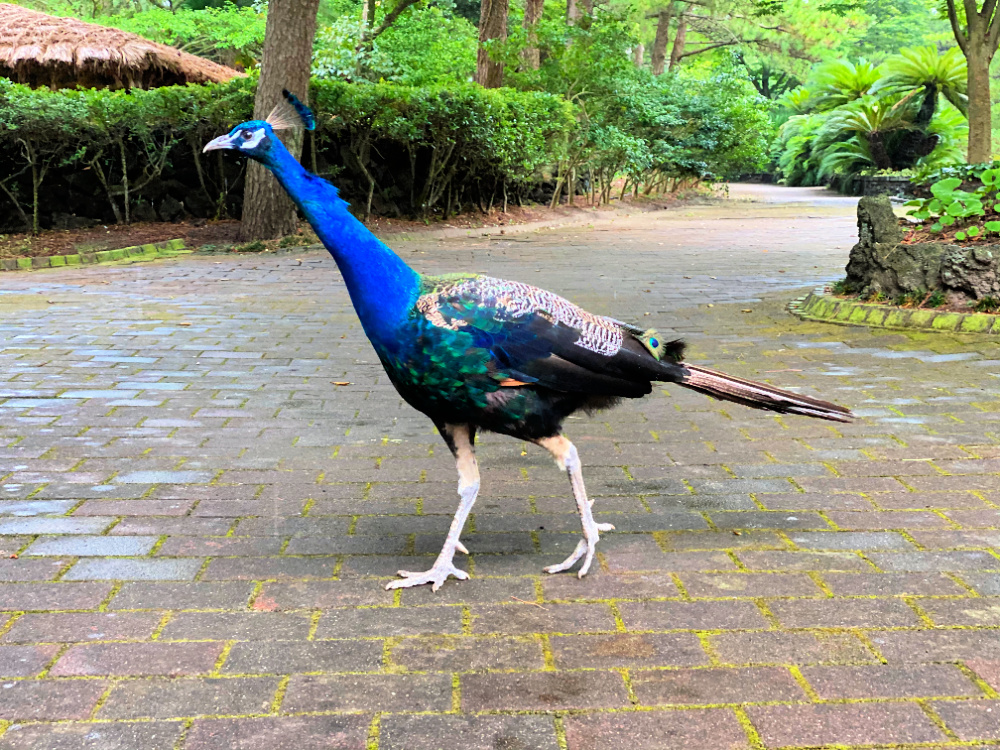 A male peacock freely roaming around the Bird Garden

Jae-am Stone Exhibit Hall showcases precious stones and rocks found on the island. You will also find a couple of fossils telling the existence of animals that lived long ago.

Close to this exhibition hall, you can find the Cherry Blossom Garden and the Ume Flower Garden, which are open to visitors only during early Spring, in April and February, respectively. 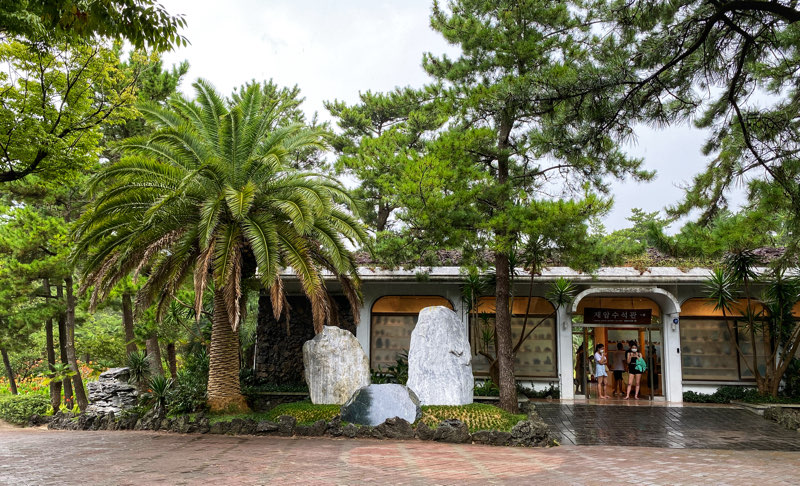 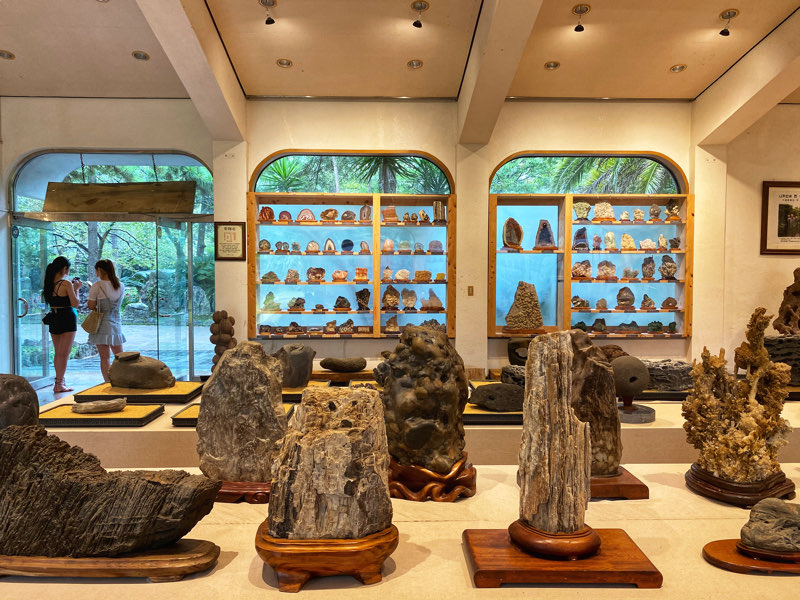 The water lilies and lotus flowers bloom during the summer and early autumn. I caught their beauty when I last visited Jeju Island during the last week of August (2020).

At Water Garden, you will find the water lily and lotus pond, human-made waterfall, among other entertaining features at this part of the park. 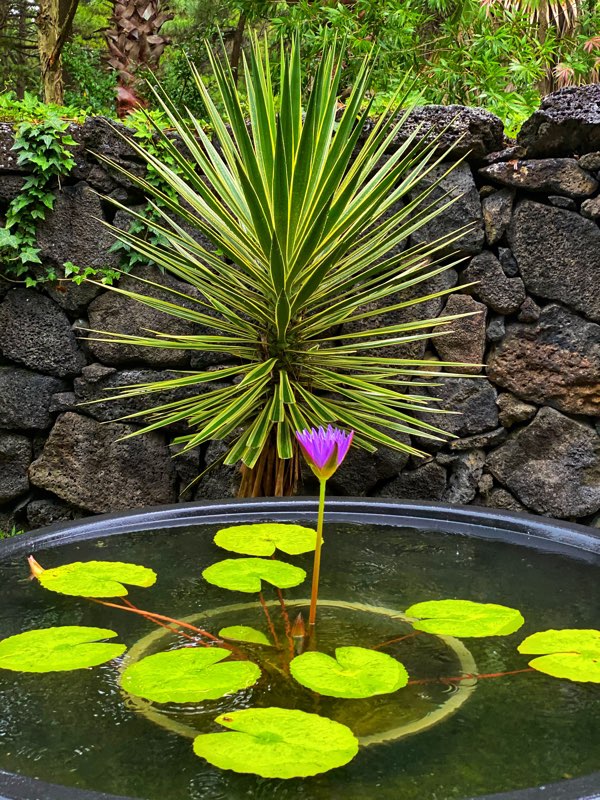 Water Lily along the road 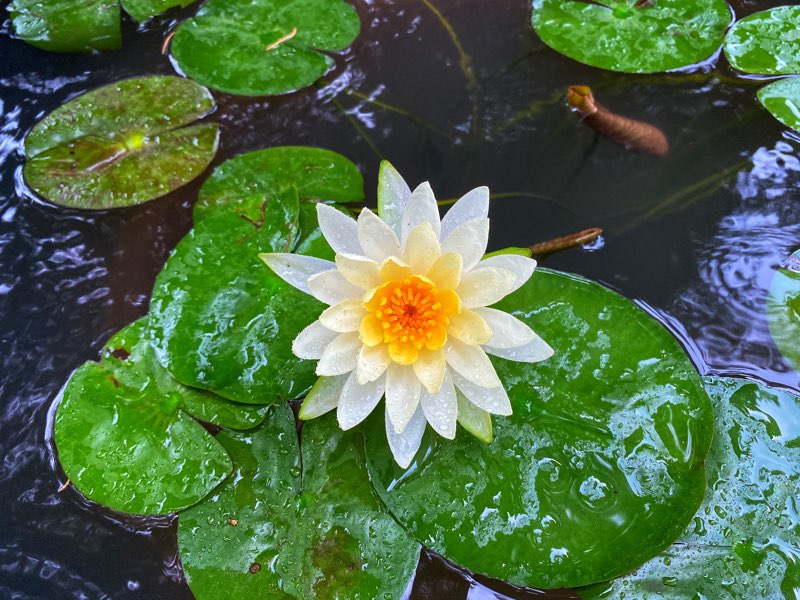 At this botanic garden, you will find various sorts of plants and flowers. When I visited Hallim Park, I still caught the last flowers of Bougainvilleas; some of them were already fading.

But I can imagine their delightful and bright colors, which remind me of my home, especially during my childhood.

Exploring this part of the park during the summer season (from June to early August) would be the perfect time to enjoy the flowers aside from the other plants inside. 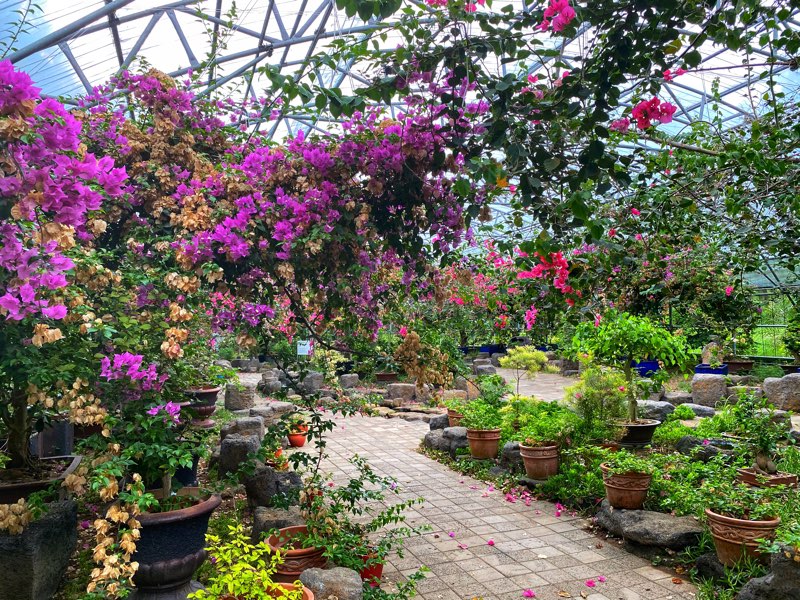 Bougainvilleas and other subtropical plants at Hallim Park's botanic garden

If you love stones with interesting human-like forms, you should not miss this part of the park. It is located close to Hyeopjae and Ssangyong caves. I did enjoy their presence and feeling somewhat eerie because of their shapes! 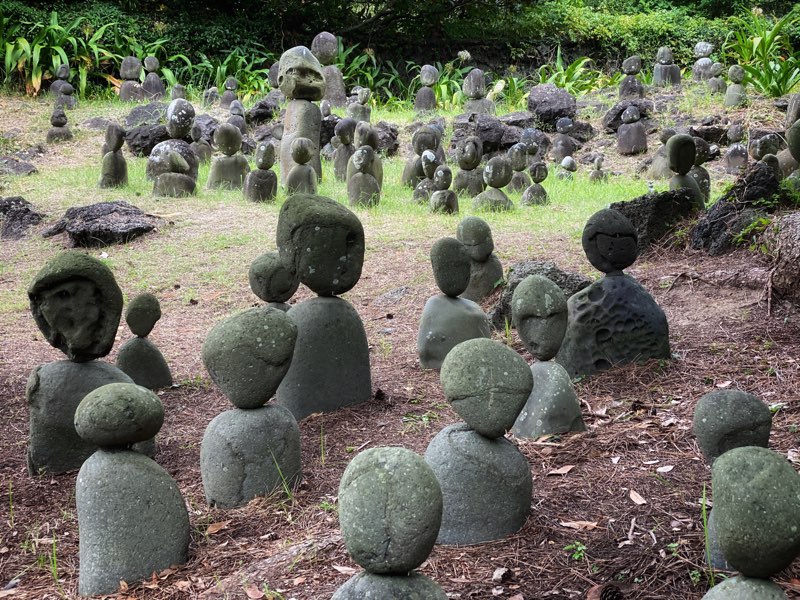 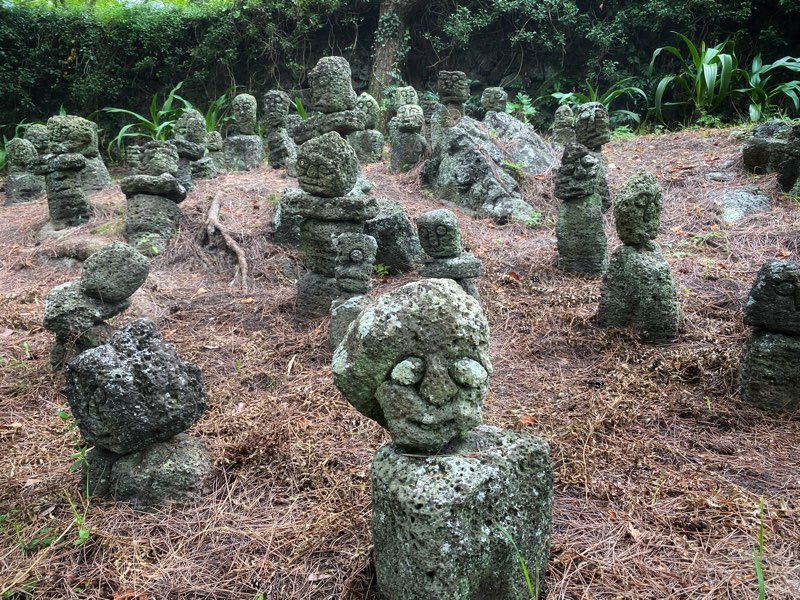 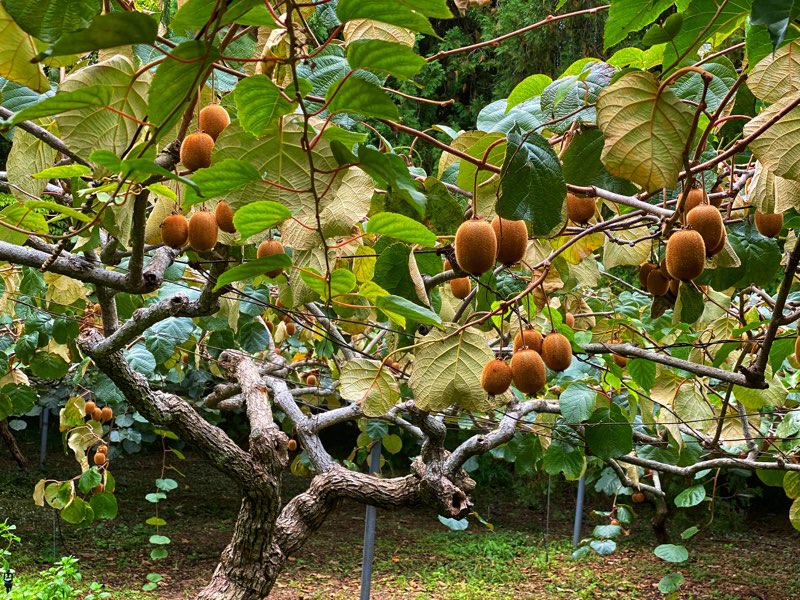 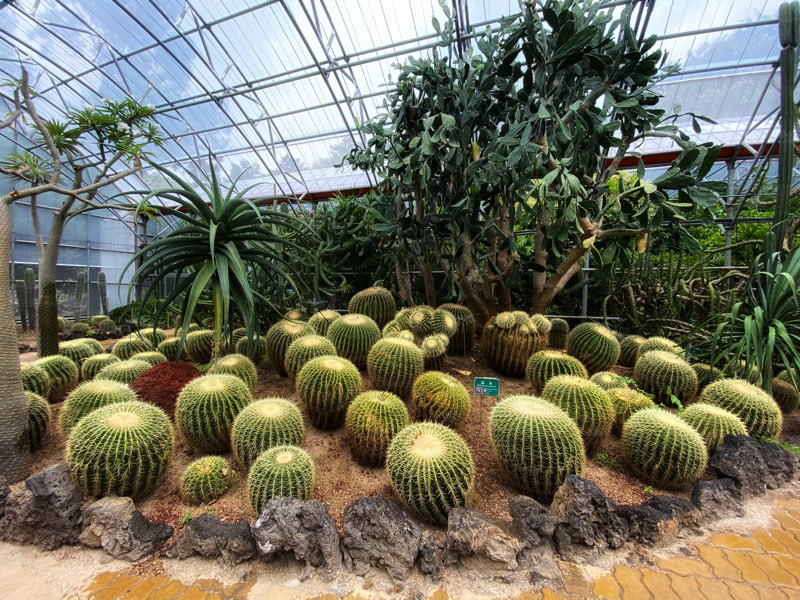 Cacti inside a green house at Hallim Park 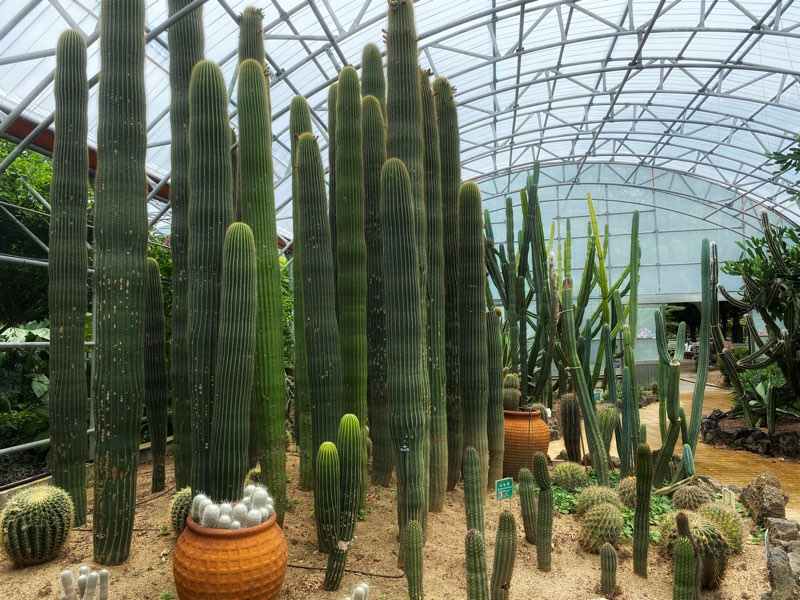 If you come on the right time for some flowering plants and trees, you will double your joys during your visit. The following beautiful sights are the following...

Bringing your family, friends, colleagues, or a group of visitors will undoubtedly have a great time and keep great memories.

That's because you (and your gang) will be enjoying a half-day or full-day exploring the facilities, some of which already mentioned above. Here we go... 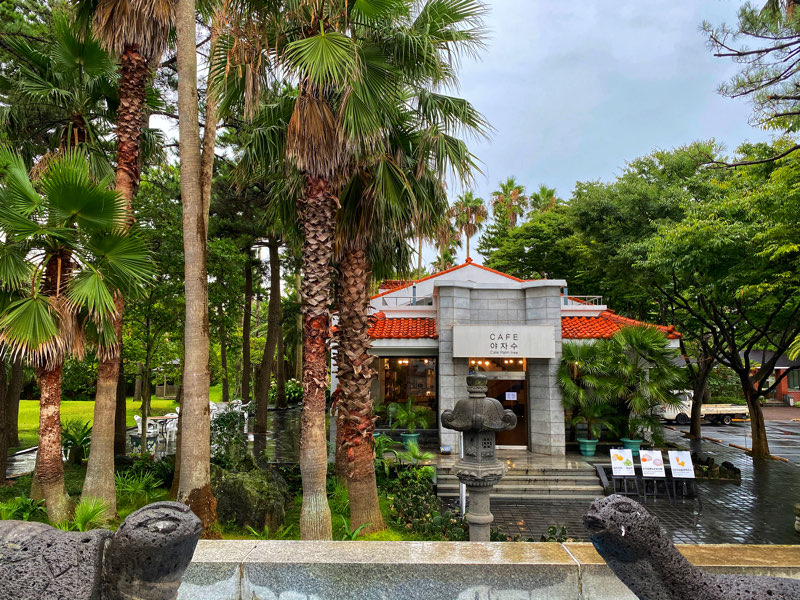 You might have to get a Korean address if you are traveling alone and do not know how to speak the local language. Don't worry, it's below.

Business Hours:
The operation time all year round differs according to the season. Below are your timeframe guides: 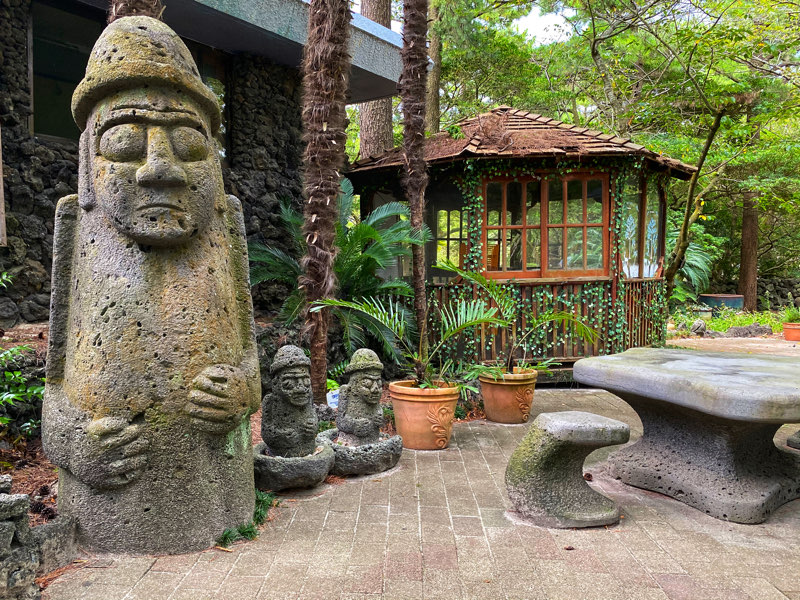 Getting to Hallim Park

You can take public transportation or rent a car, motorbike or bicycle to get there. A spacious parking area is accessible in front of the entrance area.

By Bus
From Jeju Intercity Bus Terminal, find or ask for a bus that travels to the West. Then get off at Hallim Park Bus Stop.

If you are from Jeju International Airport, take bus #100 get to Jeju Intercity Bus Terminal first.

By Taxi
It is very convenient to get there by taxi, especially when you come with a partner or friend or family member. That's because it is much quicker and inexpensive.

Getting there, riding a motorbike is not a bad idea. You can drop by and explore great sights and views along the way.

Finally, riding a bicycle around the island is accessible. I did it twice already, and it was fantastic! I would do it again.

Thanks for reading through this article. Have a great day!