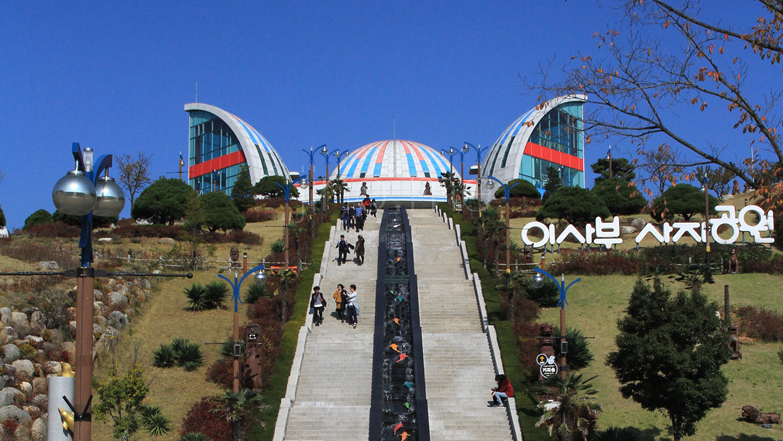 The 'Stairway to Heaven' steps of Isabu Lion Park in Samcheok, Gangwondo Province.

Isabu Lion Park (이사부사자공원) is a famous park and entertainment site in Samcheok City, Gangwondo (Province). It is strategically located on top of a hill facing the beautiful blue sea and beaches on the east coast of Gangwon Province.

Isabusaja Park is a family-type theme park with lots of activities, entertainment facilities, and services for recreation purposes. Located on top of the mountain (say hill), it has a fantastic location where visitors can view the surroundings and distant sights, including the sea and mountains.

It is a pioneering theme park, just as it inherited the spirit of General Isabu of the Shilla Kingdom. This Park can also be a place to organize a field trip for children or younger groups.

The fantastic location will have you wonder at the coastal scenery of Sirume Village and Chotdaebawi Rock of Chuam Beach in the East Sea.

As starter information, you should know the following...

Probably, this theme park is for those who are still very active. But, please, note that you have to walk up the steps to reach the top of the hill where most of the facilities are located.

Once you reach the top, you will see and find... 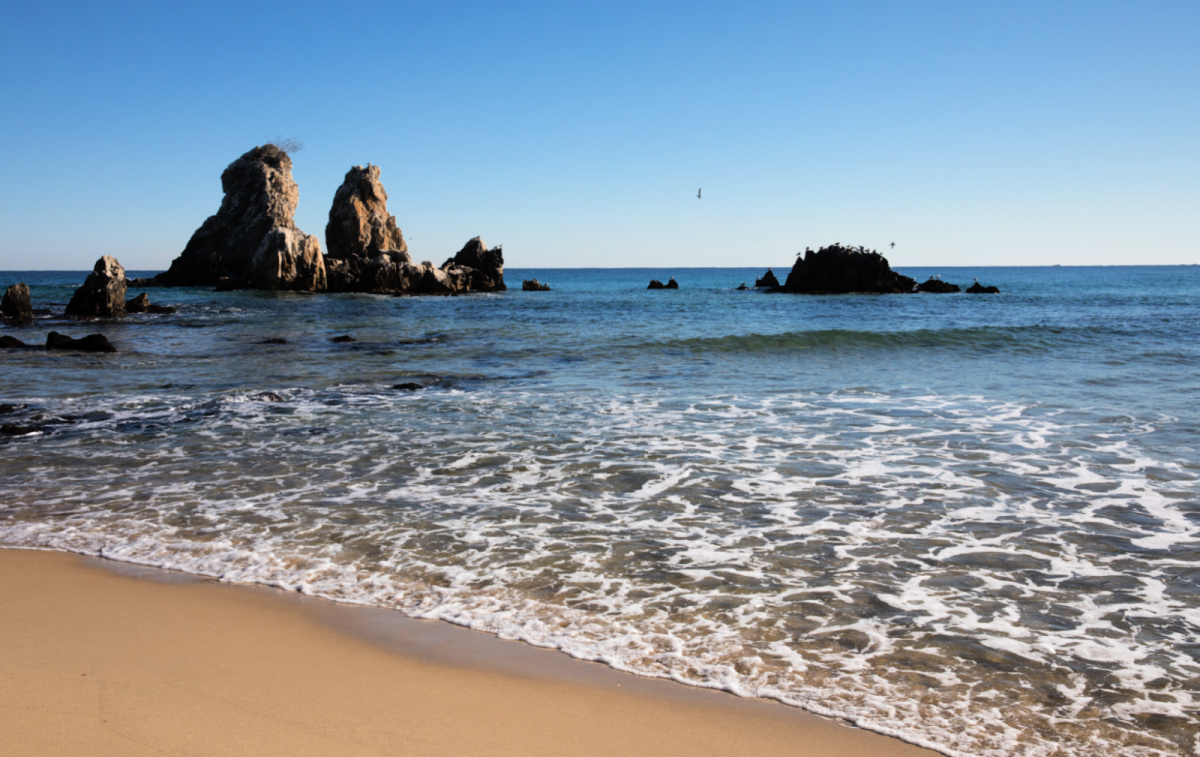 Entrance to the Park is free, but fees for the rental and activities will be collected, or tickets should be purchased before accessing any desired facility.

I guess it would help to make you more excited if you learned some backgrounds of the Park. This theme park is based on the living historical figure during the Silla period. The historical figure was a general known for his bravery in protecting the region from foreign aggression.

General Isabu (異斯夫), as he was popularly known, was Taejong Kim by real name. He was the descendant of King Naemul, the 17th king of the Silla Kingdom.

Isabu was an unemployed monarch of the Silla Dynasty responsible for subduing Usan-guk, a small kingdom in the East Sea. General Isabu historically put the maritime territory of Korea even beyond Ulleungdo and Dokdo (islands), the disputed islands as Japan also claimed it.

During Isabu's time, there was a place called Siljikguk in Samcheok but was subjugated when the Silla Kingdom conquered and renamed it Siljikju.

Siljikju was turned into a strategic military base against the Goguryeo Kingdom to the north and Japan to the east sea.

In the year 505, King Jijeung of Silla Kingdom appointed Isabu as the monarch of Siljik and given the order to subdue Usan-guk. Isabu was then in his twenties and was very determined to fulfill his orders.

Having prepared his military campaign, General Isabu was ready to subdue Siljikju in 512. But, unfortunately, the island nation of Usan-guk was naturally protected by rugged terrain of rock walls.

In addition to his significant challenges were the strong King Woohye and the brave Usan-guk people.

The legend has it that General Isabu created a fear tactic that made King Woohye and his people surrender without much bloody battle.

(The legend says that Isabu loaded terrifying sculpture lions onto the boats and demanded that the enemies should surrender; otherwise, the fierce animals would be released and destroy them all.).

A military post commanded by an official was built in Samcheokpo after the Japanese invasion of Korea. Samcheokpo served as an essential point to defend the coastal areas of Gangwondo and Gyeongsangbukdo areas.

The military post is strategic for commanding the naval forces in the Yeongdong area and defending Ulleungdo and Dokdo islands.

With this historical background, the theme park of General Isabu and the lion sculptures were built.

Isabu Lion Park is one part of Samcheok City's Isabu Shenyang program for the area. Indeed, there are more exciting attractions coming up soon.

Isabu Lion Park, as part of its attraction and goals, commemorates the event when Isabu subdued Usan-guk.

The organizers do this event by navigating the sea route relying only on the ship's sail, water tide, and oars. In addition, they built a wooden lion statue along the coast of Samcheok facing Ulleungdo and Dokdo (islands).

During the short commemoration expedition, around fifty expedition teams join coming from all over the country. They board the Dokdo Guard, a 130-ton ship that sails only by the wind.

During the voyage to Dokdo, a story about the event is told, and a ceremony declaring Korea's sovereignty over Dokdo (Island) is also held.

Note: South Korea and Japan claim sovereignty over Dokdo, and the issue is not resolved until this writing. Korea has claimed the island as part of its territory since a long time ago.

There have been 30 events held since 2008, composing the Isabu History and Culture Festival. The events are held annually to raise public awareness and interest in Isabu's existence and achievement in the past.

General Isabu has a monument built and a standard portrait on display at Samcheok City's museum. You can also see a giant lion statue in Samcheok Port Isabu Plaza.

Isabu Park is located on a hill serves as an observation structure when viewing Donghae Sicheum Chotdaebawi Rock.

Among other exciting activities is the sledding slope, which costs 5,000 KRW and is available from June to August.

Discounts are only given to local residents or groups and guests who paid for tourist facilities in Samcheok City. Discounts are not available during special holidays and weekends!

You can also see over a hundred award-winning artworks during a contest Wooden Lion National Craft Contest on display in the Park.

Also, there are free movies shown during summertime in the parking area. You've got to get there to find out more!

Nearby Isabu Lion Park, you can explore various places, sites, attractions, or anything relaxing as it is close to the beach and sea.

In front of Isabu Lion Park, you will not miss finding Jeungsan Beach, which is impressive and tempting for swimming.

Sol Beach Samcheok is another beauty and is only about ten minutes on foot away from the Park.

Chuam Beach is also unique, and you will recognize it when you see the famous Chotdaebawi Rock formation ('big candle rock' rocks), which can be reached via a wooden hanging path/bridge.

Chotdaebawi Rock is being visited annually by approximately 250 thousand visitors making it one of the top tourist sites in the area.

The best way to get to Isabu Lion Park is by taking public transport (a train or bus) to Samcheok City first.

Via Train
You can take the train from Seoul Station in Seoul (or anywhere in the country wherever available) and get off at Donghae Station. From Donghae Station, you can take (#21) a bus or a taxi for Samcheok City.

From Samcheok City, take Bus #11-1 and get off at Jeungsan Bus Stop. You can hear every stop's announcement inside the bus. If you want to make sure, inform the bus driver ahead of your destination.

By Bus [from Seoul]
Wherever available, take a bus from Samcheok Bus Terminal.

From Seoul, take from Dong Seoul Bus Terminal to Samcheok Bus Terminal. From Samcheok Bus Stop, take Bus #11-1 and then get off at Jeungsan (Beach) Bus Stop. The Park is just about 2 minutes away on foot.

You can also hire a taxi from Samcheok City to the Park should you wish to get there quickly.

If you need further information, please send an email, and I'll respond as soon as possible.