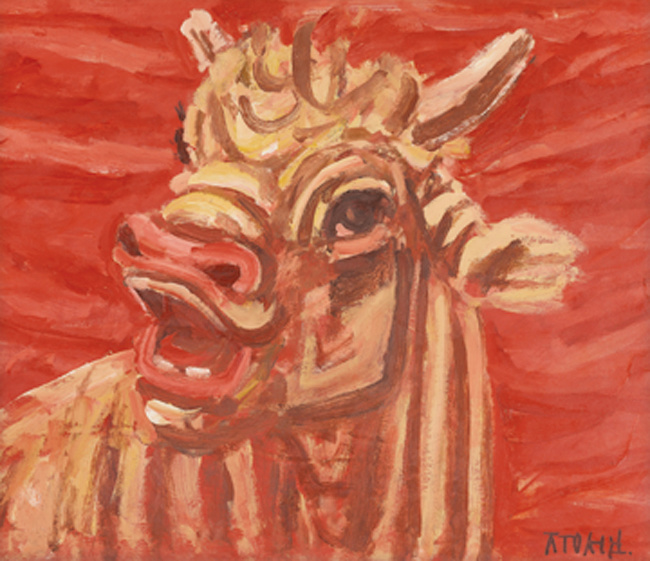 Lee Jung-Seop is a famous and great artist (painter) who survived the most challenging times during the Japanese occupation of Korea.

To honor his talent and tremendous contribution to Korea's cultural and art world, the Lee Jung-Seop Art Gallery's impressive structure was built in his honor.

The art gallery was established in 1995 at the heart of "Lee Jung-Seop's Art Street in Seogwipo City on Jeju Island. The dedicated art street partly belongs to the famous Olle Route 6.

The art gallery houses the numerous paintings Lee Jung-Seop created in Korean modern art's history. By the way, he lived in Seogwipo sometime in his life.

Lee Jung-Seop (or Lee Jung Seob or Lee Jeong-seop) was born and grew up during the Japanese occupation in Korea. He learned that he loved art during his school days, mostly when he met his favorite high school art teacher Lim Yong Ryeon.

To make the story short, Lee Jeong Seop went to Japan and entered at Teikoku Art School in 1932. He was interested to learn the Occidental Painting style and studied hard as he loved it.

However, he suddenly stopped going to Teikoku Art Shcool and joined at Bunka Gakuen and got more interested with the avant-garde than Teikoku School.

During his art studies at Bunka Gakuen, he showed much interest in doing Fauvism ("wild beasts" style in French) and freestyle drawing. Since then, he continued what he loved doing and improved his skills.

During that time, Lee Jung-Seop met a Japanese girl (Yamamoto Masako) whom he loved and later became his wife. Yamamoto's Korean name was Lee Nam-deok.

Lee Jeong-Seop earned his diploma from Bunka Gakuen when the Second World War was about to end in 1944. A year later, he married Yamamoto Masako.

The couple had their first baby, but unfortunately, it died due to an illness. This misfortune came as he was preparing for an exhibition as yet a not famous artist.

The loss of their firstborn child affected him, but he used this sadness to paint his feelings, reflected in the painting called "A Child Flies with a White Star." This same painting was used in an exhibition to commemorate the independence of Korea in 1947.

Life During the Korean War

When the Korean War broke out, Lee moved around frequently and found a home in Busan when his first son, Taehyun, was born in 1947. Then a second son followed, who was born in 1949 named Taeseong.

He also moved to Jeju Island during wartime. Fearing for his family's life and financial difficulty, Lee sent his wife and two sons to Japan for the time being.

Lee kept supporting his family, but the hardship in earning money made it difficult to reunite with his family again. It was said that he met his family for a short time in Tokyo after a few days only in 1953.

He returned to Seoul after his brief meeting with his family in Tokyo. In Seoul, he held a private exhibition, the only one he had.

Being far from his beloved family, living a difficult life, Lee got a mental illness. He turned to drink alcohol and died of hepatitis in 1956.

Despite the short life, he left a remarkable legacy of artworks influenced by Fauvism, which is combined with indigenous themes.

At Lee Jung-Seop Art Gallery, you will find many of his artworks and imagine how this artist produced such pieces during the most challenging period of his life.

The piece depicts nature and people living in harmony--birds, peach fruits, and trees on a warm sunny day.

The painting showed his love of Seogwipo as his home during his stay here. This gallery was opened in 2002 to display such beautiful images and his achievements.

The gallery is located on a hill and adorned with the surrounding lush plants and flowers. The pathway will lead you to his house, where his family used to live.

It will be an excellent cultural and art education tour if you decide to see the place. Coming with one, maybe a Korean friend, will all the more make your day as you can get translations of the art pieces.

The Lee Jung-Seop Art Gallery houses the precious eleven original art pieces. And you might also enjoy (of feel sad) if you read (or hear a translation) the number of letters he sent to his beloved wife.

Besides the original collections, you can also enjoy another floor exhibited with his original works' reproductions.

Also, you will find that the second floor holds exhibitions of other arts by modern artists. So, it is not only his style but different styles which you might enjoy.

Location and Admission Fees
Please, you may use the following details to help you decide and get there more comfortable.

Please, note that a child under 6, an adult over 65, and people with disabilities or with national merits can be admitted for free at Lee Jung-Seop Art Gallery.

Getting to Lee Jung-Seop Art Gallery

Located in Seogwipo City, you can get there by taking public transport from anywhere on the island.

The museum is close to the Seogwipo Cross Province Bus Terminal. Signage to the gallery in the English language will lead you there.

From Jeju City, you can either take a bus or taxi to Seogwipo City. The travel time is about an hour.

Thanks for reading, and have a great day!