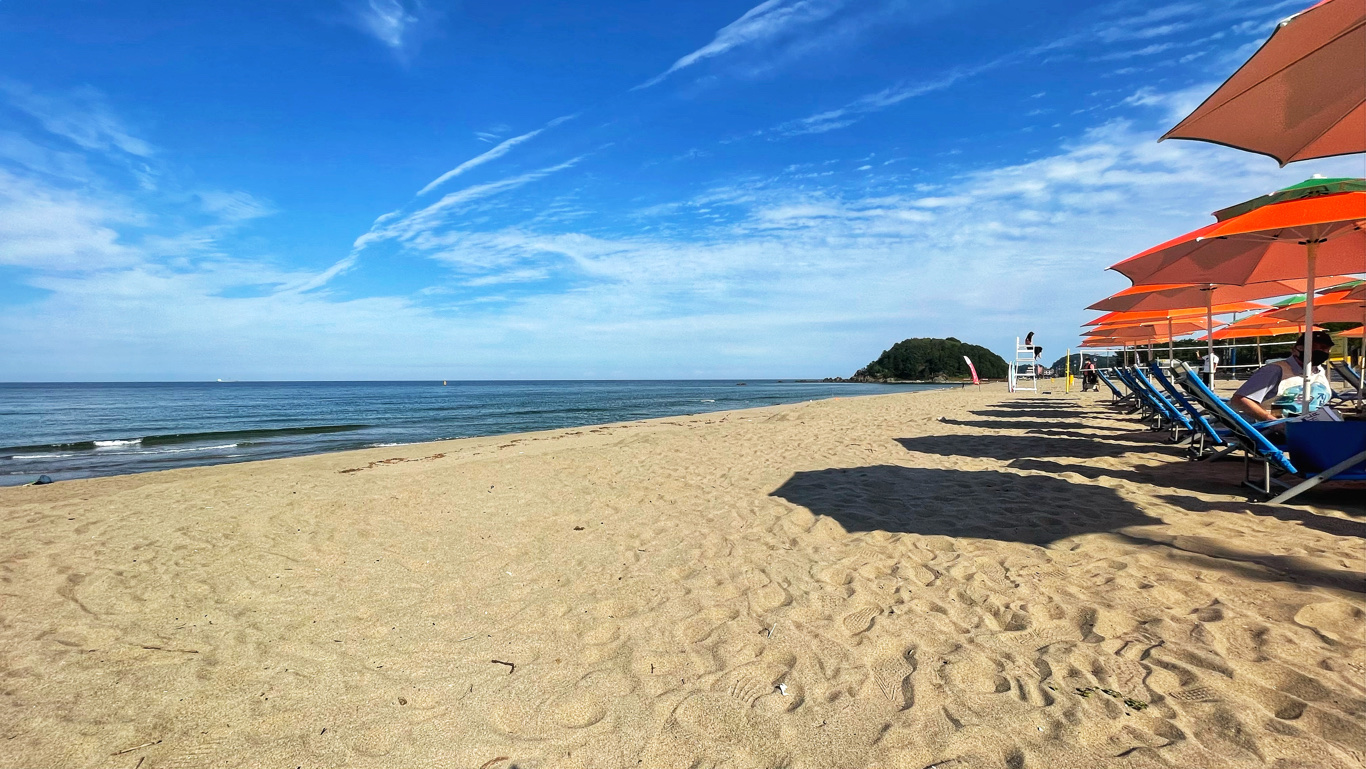 A view of Maengbang Beach with its gentle sand and blue sea...

I had been to Maengbang Beach a couple of times before I wrote this article. It is a fantastic treasure of Samcheok City - a treasure that cannot be bought by any amount of gold!

Yes, I believe in what I have just said for some reasons that I will outline below. Of course, you can already see and understand what I just claimed through the pictures here. Even then, let me say more using information I found online. Here we go...

Maengbang Beach is one of the tourist destinations among beach lovers in the country. It is located about 12 kilometers south of Samcheok City and is reachable by public vehicles.

Maengbang Beach ('maengbang' is a flower species that used to be common along the area) stretches its shorelines over 4 kilometers. Being the longest beach in Samcheok, locals divided it into three beaches...

At the Maengbang Beach's southern part, you can find the clear freshwater of Sohancheon that is flowing from Chodang Cave and mixes with the sea. So you can enjoy bathing the freshwater should you want to. 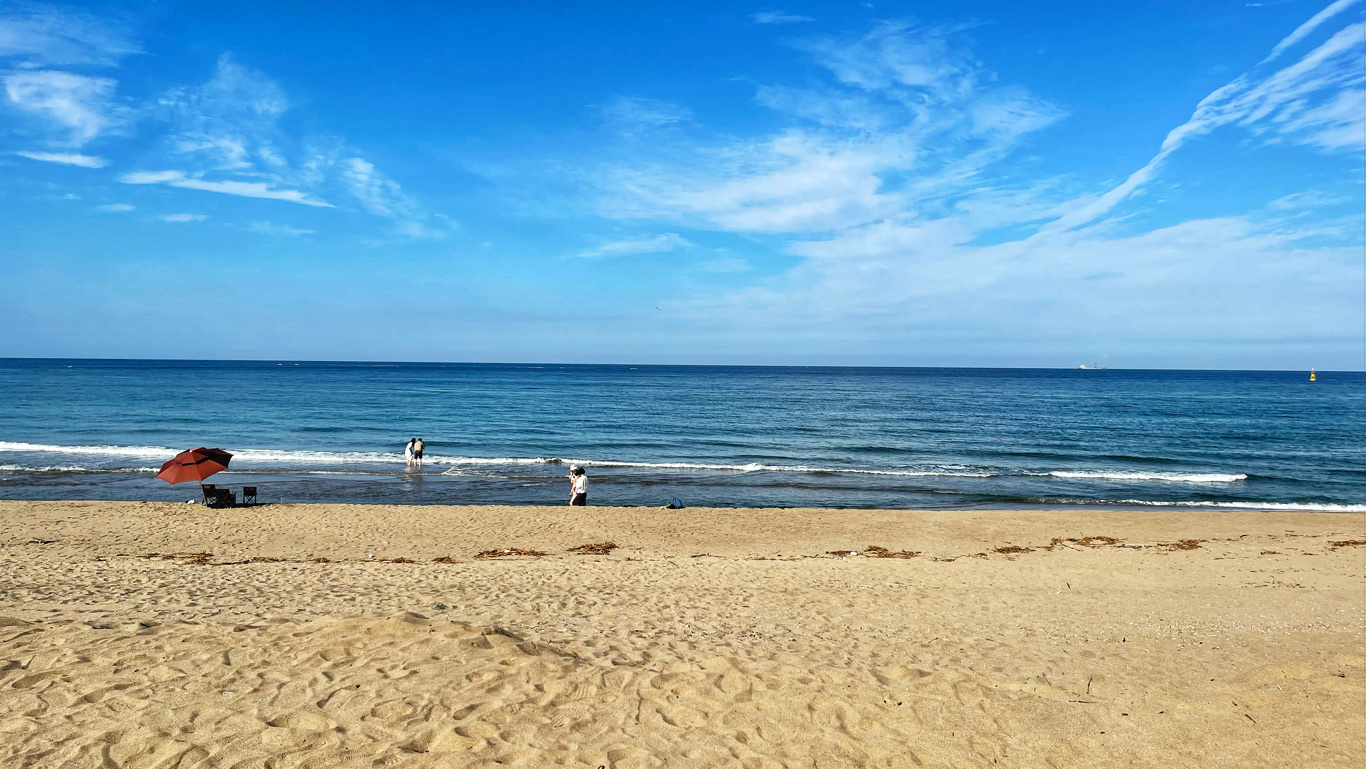 However, the large size of the area seems not to attract private investors. As a result, only some progress has been made in developing the site.

From the late 1990s to 2000, some public structures were built, including roads connecting to the main road, parking lots, road lamps/lights, and a golf driving range.

In 2013, pine trees were planted along the coastal areas that would serve as a hiking trail.

As of this writing, the beach does not provide many facilities to beach-goers during holidays except for the basic facilities, including washrooms, beach watcher's seat, beach games facilities, and sitting areas.

Movies Filmed at Maengbang
The "Road Movie" was filmed in the Ha Maengbang Beach area, where the gentle coastline is shaped like a half-moon.

The dramas "South of the Sun" and the "Indomitable Daughter-in-law" were filmed near the entrance area of the beach where you can find a village.

The movie "Spring Day is Gone" was also shot on Maengbang Beach, where you can watch the beautiful waves and their fantastic sound. 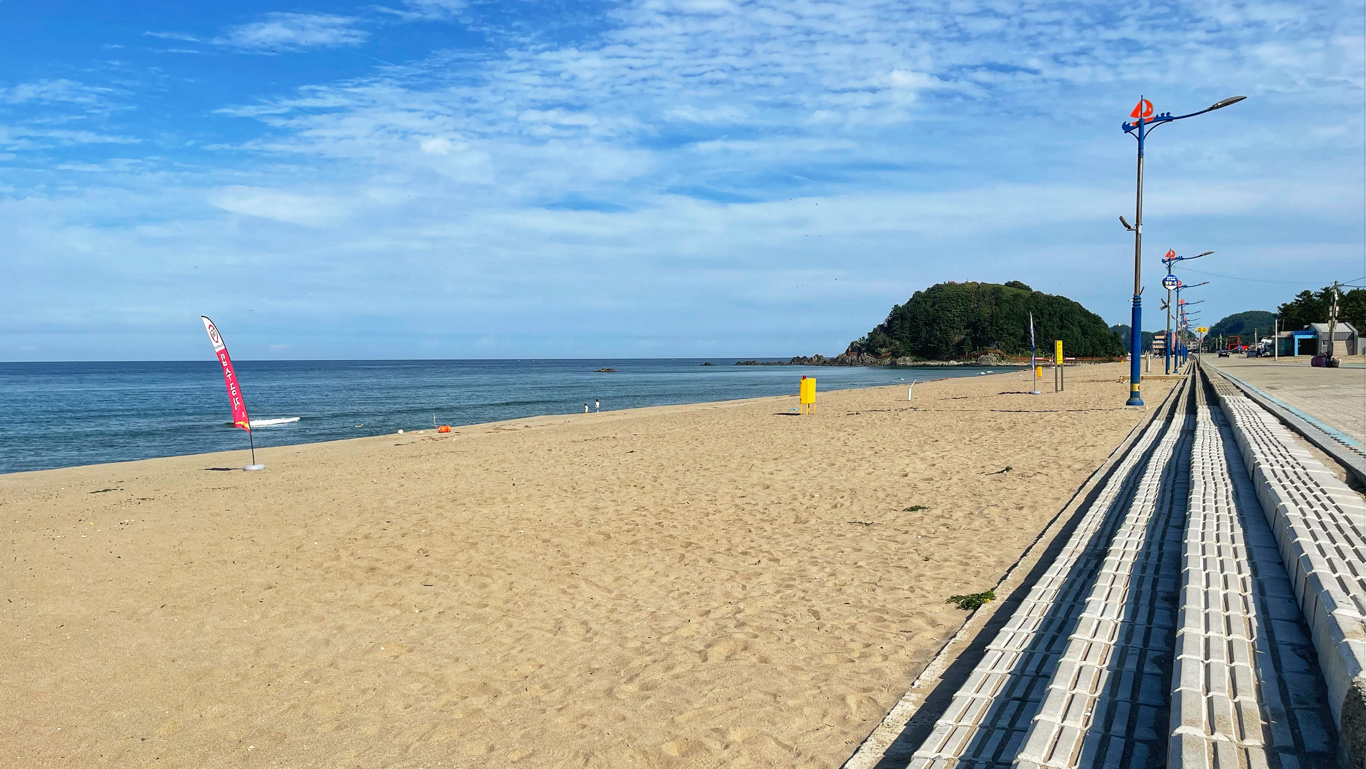 Deokbongsan Mountain is visible from any point on the beach

Deokbongsan Mountain
Deokbongsan is a beautiful mountain you won't miss seeing as it is located at the right end of Maengbang Beach. It is the more developed area of this long beach.

Deokbongsan Mountain is both an island but a mountain. You can enjoy its natural environment by crossing the human-made footbridge linking from the beach area.

People in the area named the beach nearby or in front of Deoksan Mountain as Deoksan Beach; however, it is still considered a part of the whole Maengbang Beach so as not to confuse tourists.

Deoksan Mountain is covered with green pine trees and other plant and flower species endemic to the area.

Part of the coastal tourism belt is to connect Yonghwa, Jangho, and Galnam-ri areas to attract more tourists.

The whole beach is divided into two - Sangmaengbang and Hamaengbang. So yes, you can enjoy the beautiful and unique views of the sea and surroundings at both places.

But the most recommended area to swim and enjoy the beach and sea is the Hamaengbang. Here are its great descriptions...

Yes, it is totally unique, as you can already see in the photos.

Beyond the beach and across the concrete road, you can find the trail along with the pine trees that line by the coastal area. 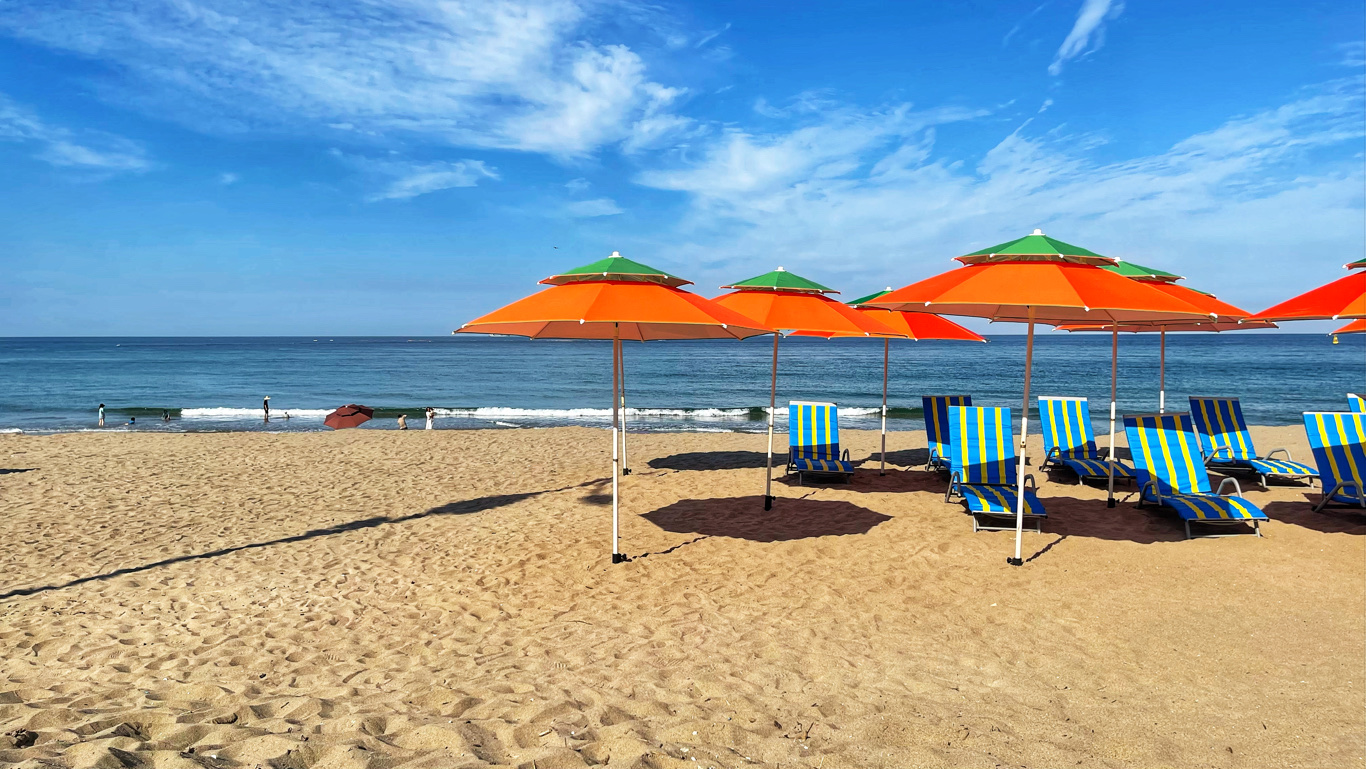 As I mentioned above, the facilities around Maengbang Beach are still very basic as the area is in the 'developing' stage attracting private investors to build more beach facilities.

Now, you will see some guest houses nearby where you can stay for a day or more, depending on your holiday plans.

Some of the facilities available include...

I know that I said they are essential facilities, but I guess they are sufficient for a short but memorable vacation. 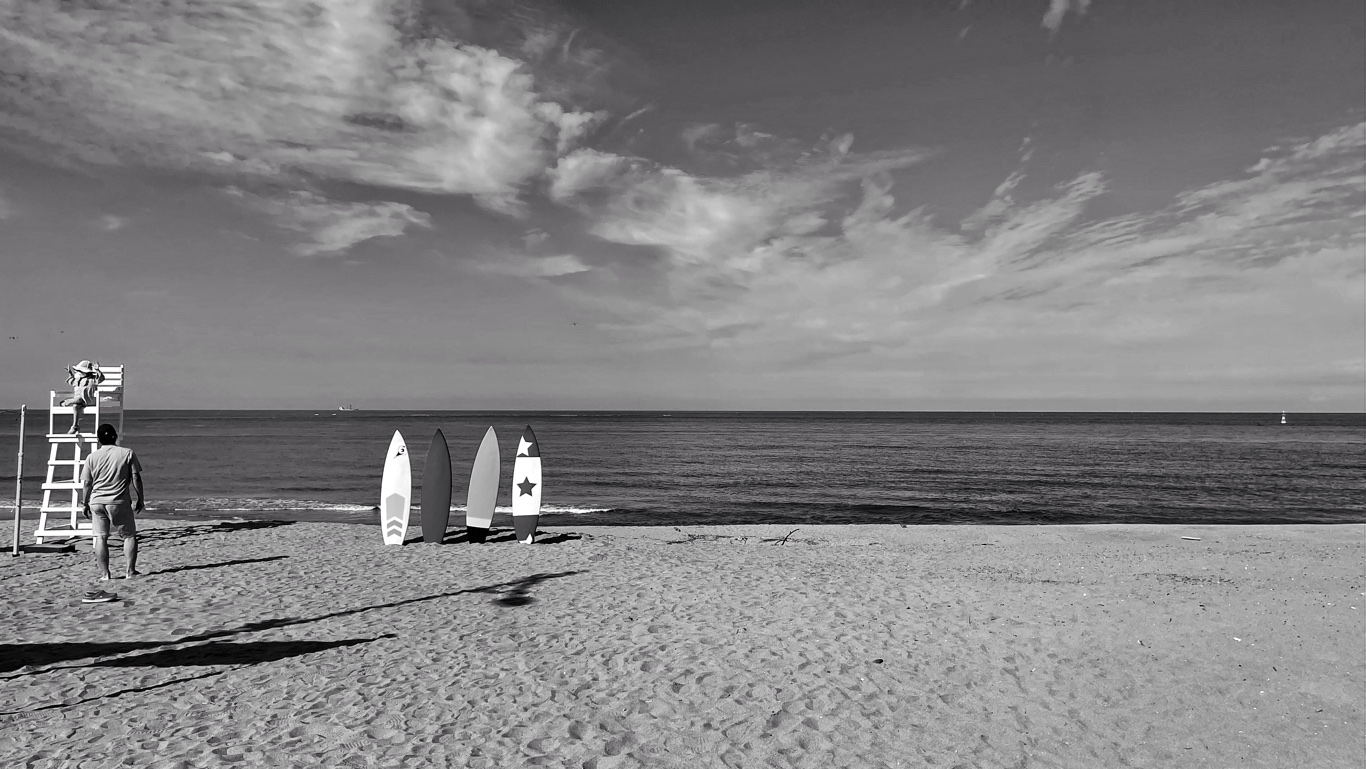 Maengbang Beach is the only beach in Gangwon Province with the longest sandy beach area.

Most exciting events and activities happen or are organized during the summer holidays. That's the time of the year when people all over the country flock to the area.

The local authority has organized and built a 'Marine Leisure Experience Area' where vacationers can enjoy various sorts of summer events and activities.

A current plan is to build an ecological trail, a zipline connecting Deokbong Mountain and Maeupcheon Stream, and flower fields nearby (Ha) Maengbang Beach area.

While you're enjoying Maengbang Beach, maybe you can also explore the areas surrounding this beach. It would only take mostly less than an hour to see more beautiful sites, structures, places, cultural establishments, among many. Also, you can see more Samcheok beaches here.

So, let's check out some of them below...

Samcheok Port is an exciting area where you can find a fishing village. It is located along Saecheonnyeon Coastal Road. You can take public transport or rent a car, park it in the parking area and go fishing along the seaside where you get the refreshing sea breeze and enjoy the blue sea.

Cheokjudonghaebi Monument is about 170 centimeters tall, has an imposing sight, and shows the area's historical significance.

Samcheok Culture & Art Center
This culture and arts center offers a complex cultural facility. If you love arts and want to learn about the local traditions and cultural features, this is the place worth visiting.

Jukseoru Pavilion
Jukseoru Pavilion is a historic site and offers natural views of the surrounding area. The Pavilion is believed to have been built around 1266 and is considered one of the eight significant attractions of Gwandong District in middle eastern Korea.

Please, find your sights and attractions nearby Maengbang Beach or Samcheok City below this page.

Alright, if you are thinking and trying to draw up your plan, let me provide you how to get there.

You can take public transport from anywhere in the country to Samcheok City and to Maengbang Beach. Otherwise, rent a car or vehicle should you wish to freely travel at your own pace and time.

From Seoul to Samcheok
Head to Gangnam Express Bus Terminal (Subway Line 3, Exit 1) and hop onto the bus for Samcheok City. It is a four-hour ride and leaves every 30-40 minutes from the terminal.

From Dong Seoul Bus Terminal to Samcheok
Dong Seoul Terminal is on Subway Line 2 at Gangbyeong Station. The bus leaves almost every hour (70 minutes interval) and arrives in Samcheok City (at 7 AM up until 8 PM).

By Train
You can take the fast train from Seoul Station or Cheongryangni Station in Seoul to Donghae Train Station (no train goes to Samcheok City). From Donghae Station, take a bus or a taxi for Samcheok or Maengbang Beach. Samcheok is about 15 minutes by taxi, and Maengbang should be over 30 minutes.

From Samcheok City to Maengbang Beach
If you are already in Samcheok City, arriving either by bus or taxi (from Donghae Train Station), take a local bus at Samcheok Intracity Bus Terminal and get off at Geundoek Nonghyeop Station or Agricultural Technology Center Station.

Take any of the following buses: 21, 22, 23, or 24. It takes around 20 minutes from Samcheok City to the Maengbang Beach area. Take note that the beach is a walking distance of the bus stop.

Please, let me know should you need further information. I would be glad to help.