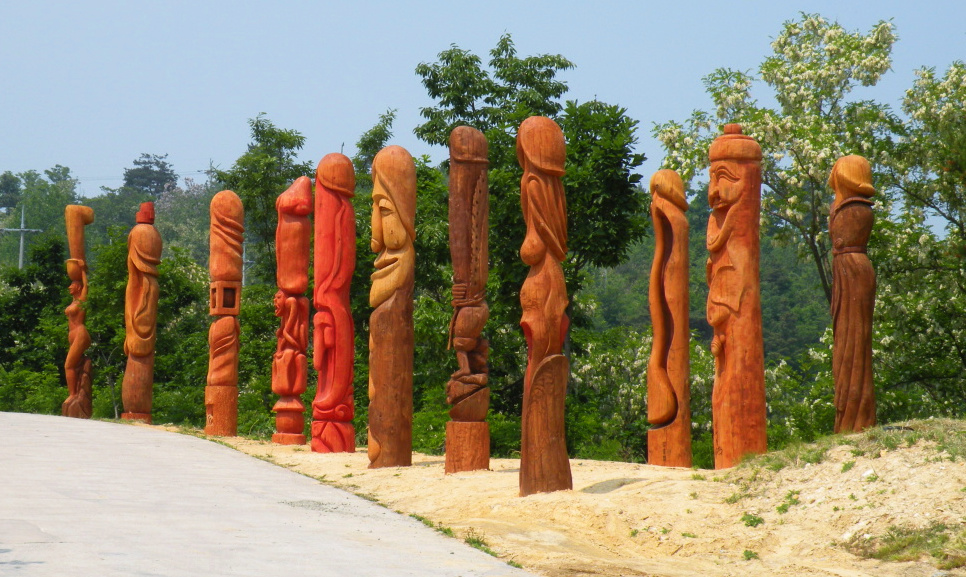 Samcheok Haesindang Park is famous for its largest aquarium museum in the country. The Park belongs to Samcheok City in Gangwondo Province about four hours by train or bus.

Also, one section of Haesindang Park is very popular for its fishing village, where you can explore witty phallic sculptures by local artists.

The Park exhibits traditional and folk items displaying the lifestyle of the fishers of the East Sea. In addition, this is a conservatory where you can find artistic phallic symbols and expressions.

Furthermore, you can also see the interesting bronze statue depicting the legend surrounding the nearby village.

Regarding nature, you will notice the green pine trees along the coastal trail where you can enjoy a stroll with the relaxing sight of the sea and surrounding sceneries—one of the best on the east coast.

In dedication to the legendary woman (wife of a fisherman) who died in the area, the locals built the Haesindang building. It is a small building where locals hold a biannual religious ceremony called the 'haesindang.'

The rock where the woman waited is called "Aebawi Rock."

The Aebawi Rock Legend
It was told that a young man and a young woman who was engaged lived in this village. One day, the young man went out into the sea to fish and gather seaweed.

On his way to the sea with his fishing gears, he let the young woman wait for him on the beach area on top of a rock. He promised to be back soon so that they can go home together.

The legend told that a storm suddenly came out of nowhere, blew the woman off the rock down to the sea, and drowned her.

After the woman's loss, the villagers noticed that they could not catch any fish in the area. This has made them so disappointed and confused since the east coast is teeming with fish, and fisherfolks usually come home with loads of fish.

Somebody suggested that the death of the woman must have some connection to their plight. Upon hearing that idea, villagers started offering various items and ceremonies to appease the soul of the dead but with no result. Fish was still nowhere to find in the area.

To make the story short, a man climbed over the rock where the woman fell off, and he started spreading his body fluids all over the rock and into the sea.

The following day, the villagers went again into the sea, hoping that the fish would return to the area. But, to their surprise, the fisherfolks returned that day with their boats so heavy with fish that they looked as if sinking.

As the villagers tried to find answers, somebody said that the fish must have returned because a man spread his body fluids on the rock where the woman died.

My Interpretation of the Legend

Reading such a legend sounds ridiculous, absurd, and even offensive to anyone who takes it literally or has no better understanding of folks' stories and legends.

Below is my rough understanding of Aebawi Rock's legend...

Seasonal Fish
The non-availability of fish, which was interpreted by folks as due to the woman's death, I thought would be the seasonal appearance of fish species in the area.

We know that schools of fish, and even the whales, travel hundreds of kilometers. They breed and feed on a specific source of food available only in some areas at a particular time of the year.

As they move from one area to another, it simply means that they are not available for fishing during that period. And so, that must be the time when the legend was created and then attached with some ceremonies to thanking for the great harvest of fish.

Universal Symbol of Fertility
The symbolism of fertility is found in almost every culture. However, it is most commonly featured in ancient cultures, including shamanism, through sculpture and paintings.

The most common fertility symbol is the phallic or genital parts of male and female. Speaking literally, these are the symbols where life is created and come into the open world of the living.

Ancient and present cultures (such as Japan, Jeju Island, etc.) have phallic sculptures which symbolize fertility and a good harvest of seafood and farm products.

I believe this is similar to what Samcheok people commemorate annually at the Haesindang building in the Aebawi Rock area.

To celebrate the good harvest and fertility in the area, the Samcheok Haesindang Park was created for everyone to explore and enjoy.

Many Korean artists display various kinds of artistic items and masterpieces in the Park.

A small folk museum called Village Folk Museum shows art objects on "sex iconography" collected from many cultures around the world, shamanistic rituals, and the history of the fishing culture of Korea.

A bronze statue stands on top of Aebawi Rock, where she was believed to be waiting for her husband.

Over 300 phallic sculptures are viewable with various shapes and sizes. As artistic symbols, you will see the artists' skills in presenting their minds through their art products.

Samcheok Haesindang Park (해신당 공원) is located on the east coast of South Korea, in a small town called Sinnam. It is about 20 kilometers (12 mi) south of Samcheok in Gangwon Province.

More Information
Samcheok Haesindang Park is closed every 18th of the month. However, if this date falls on a public holiday, it's closed instead on the next working day.

You can explore the Park in an hour or two, but you can take your time to enjoy the views and surrounding areas along the coast.

Parking facilities are available nearby. The parking fee is free.

Senior citizens (ages 65 & older) must present IDs or other proof of their age.

Baby strollers are available for rent only.

Pets are not allowed in.

While in the area, don't miss any interesting sights and places. So, try the following suggestions to maximize your experiences and joys... 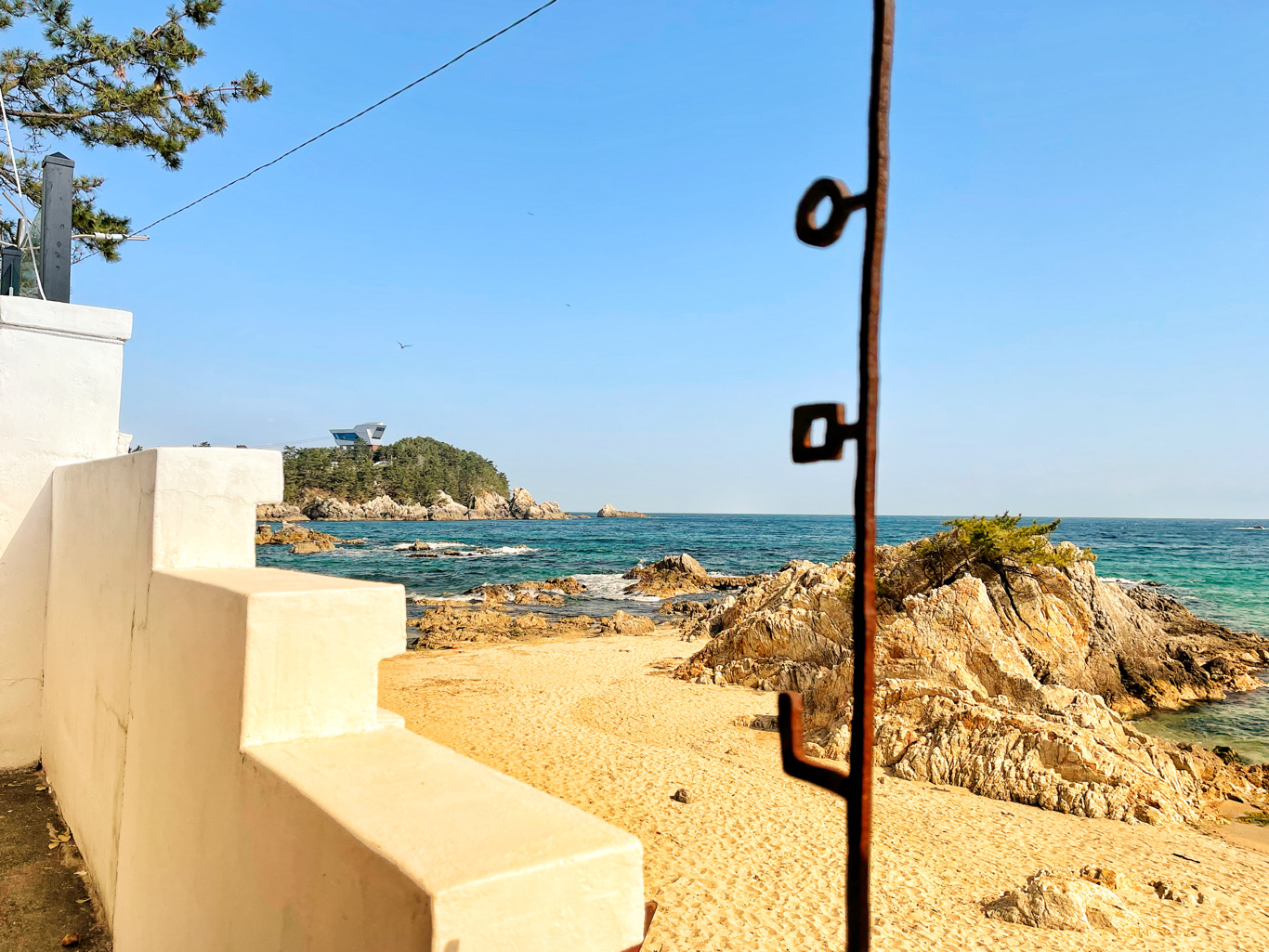 The best way to get to the Park is to get to Samcheok City first. Then, you can take a train, bus or taxi to this city. From Seoul, it takes around four hours to get there.

By Train (KTX)
Purchase your ticket online (www.letskorail.com) and take the train at Seoul Station (or Cheongryangni Station, Seoul). First, download the app, and then register to purchase the ticket. Different languages are available in the apps.

It takes around four hours from Seoul Station to Donghae Station (not in Samcheok City), where you need to transfer to a bus or taxi for Samcheok City or Haesindang Park.

It also takes around four hours to get there. If you don't take a nap, you will enjoy watching the east coast sea views.

From Samcheok City, take a local bus (#Bus 24) or a taxi to bring you to Samcheok Haesindang Park. Bus 24 runs once an hour and takes about 45 minutes to the Park.

Let the driver know that you want to get off at Samcheok Haesindang Park. The bus stop is at the top of the Park.

Contact me should you have important questions. Have a wonderful day!