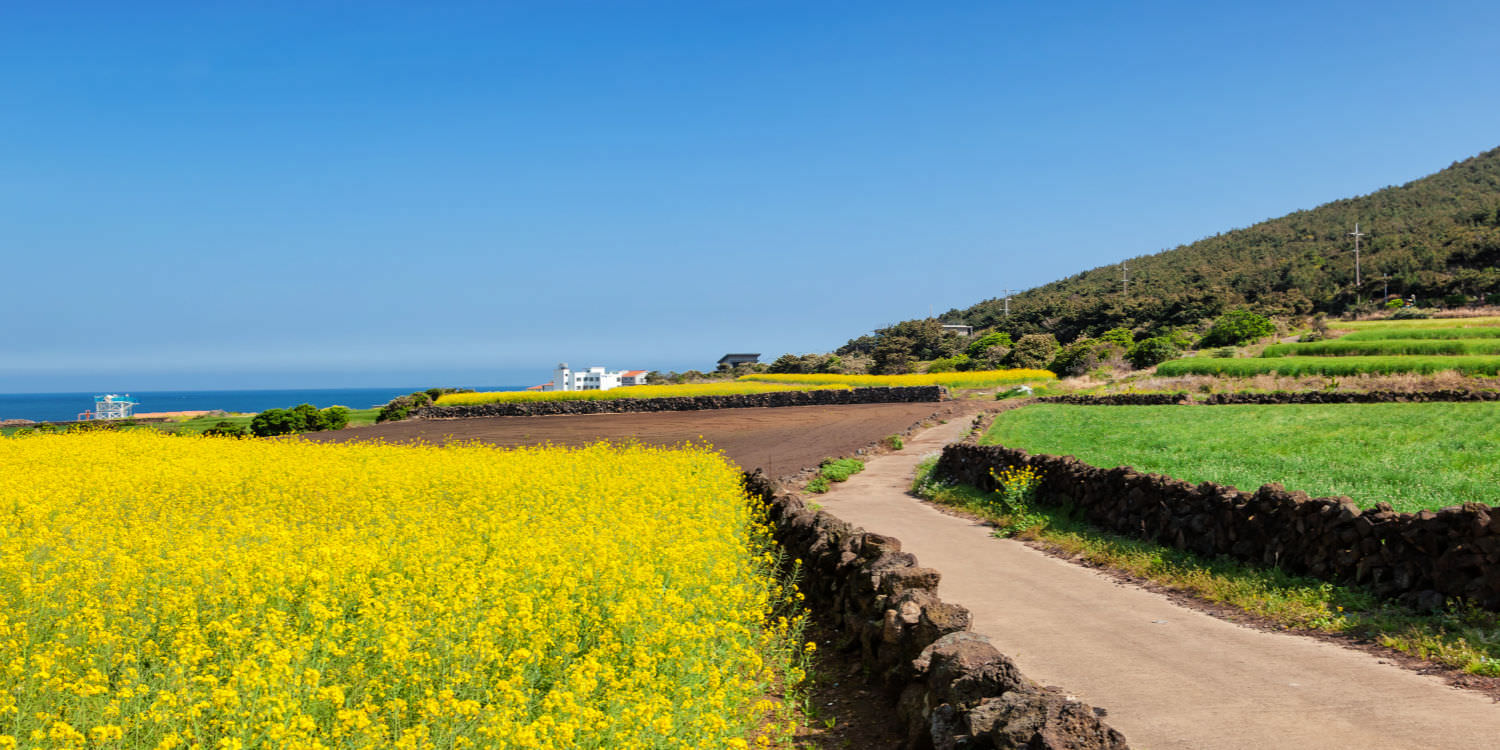 Udo Island is part of Jeju Island, also known as the "Hawaii" in Northeast Asia. It is a popular honeymoon destination not only among Koreans but also among foreign couples alike.

"Udo" derived from the shape of the island resembling a cow in a lying position. Udo is located off the eastern coast of Jeju island.

Like the main Jeju Island (or Jejudo), Udo Island has fertile black soil (due to the volcanic ashfalls), fecund fish variety, and scenic sights.

Some observers even say that Udo Island is a 'miniature' of Jeju Island itself. Udo has plenty of sights to be explored, including local heritages:

In addition to the natural and marine tourism promotion, Bukjeju County assigned two ports on the island, Udo and Haumokdong Ports, and the surrounding 25 thousand sea area as Udo Maritime Park in 2001.

Alright, to be more specific about the possible choices of places you wish to explore, let me describe a few of the most popular ones below.

Many Korean soap operas and films were shot on this island due to the unique and exquisite land and seascapes of Udo.

Seobin Baeksa
Seobin Baeksa is a white sand beach area on Udo, designated as Natural Monument No. 438, and one among many Udo Island attractions. The beach is widely promoted and seen in films and television advertisements.

Seobin has a white sandy area from where you can relish the blue and emerald seawater. The gradation of colors is what makes its sea more amazing to observe during the day.

Seobin Baeksa, including the Hallasan Mountain, is among the most popular travel attractions on Jeju Island.

If you climb Udobong Peak, the highest point on the island with over 130 meters height, you will find the lighthouse amid the mountain park. Enjoy the sights and mesmerizing panoramas from the peak's offers.

Hagosudong Beach
Hagosudong Beach is another famous beach destination among travelers to the island, including locals. Some observers call it the 'Saipan of Korea'.

It features a spacious sandy beach and great views of the sea. It also features a backdrop of rock formations and rocky cliffs that stand proudly and facing towards the sea.

Jeju Island has many beaches, which seem to be looking almost have similar features. However, you will find that Hagosudong Beach has its unique and exotic features.

The sea level is relatively shallow, and its sand gentle to your feet. So, it is ideal for guests of different ages, including children. 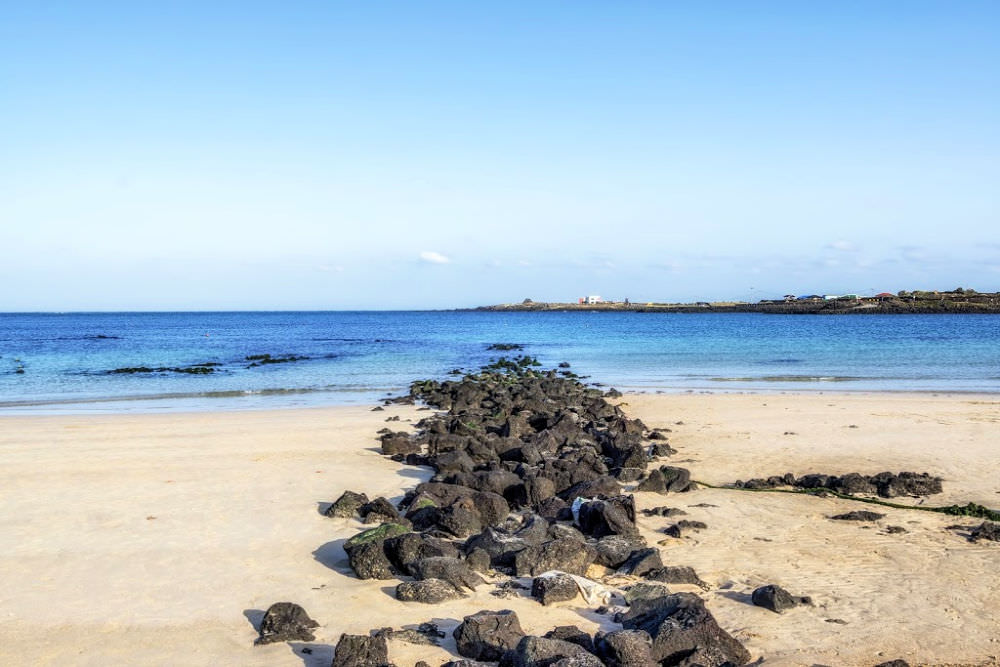 The beach area can become crowded and packed during the summer holidays. The mainland and other seasonal travelers come to enjoy the island's offers.

During the summer, people enjoy the beach with barbecues, snacks, drinks, seafood, fast foods like noodles and kimchis.

In the evening, people enjoy the night lights from other islands, fishing boats, or fireworks.

Facilities at Hagosudong Beach. You can rent a room and shop for personal effects and food from shops around. You can also use its parasol, shower room, and restroom (for about 2,000 Won).

Jeju Olle Trail (Udo Island Olle) (제주올레 1-1코스 (우도올레))
You may have to familiarize yourself with this guide if you want to hike around the beautiful island of Udo.

With this trail guide, you can enjoy the cow-shaped like island, with its green fields and farmlands, black volcanic stone walls, lighthouse, rock formations, and the emerald sea surrounding it.

The best time of the year to travel or hike around the island is during summertime. But its beauty does not change throughout the year. By the way, Udo Island is the largest among the 62 islands (and islets) around Jeju Island.

The Jeju Olle Trail will take you Seomultong Hill and passing along the fields of barley and rye. 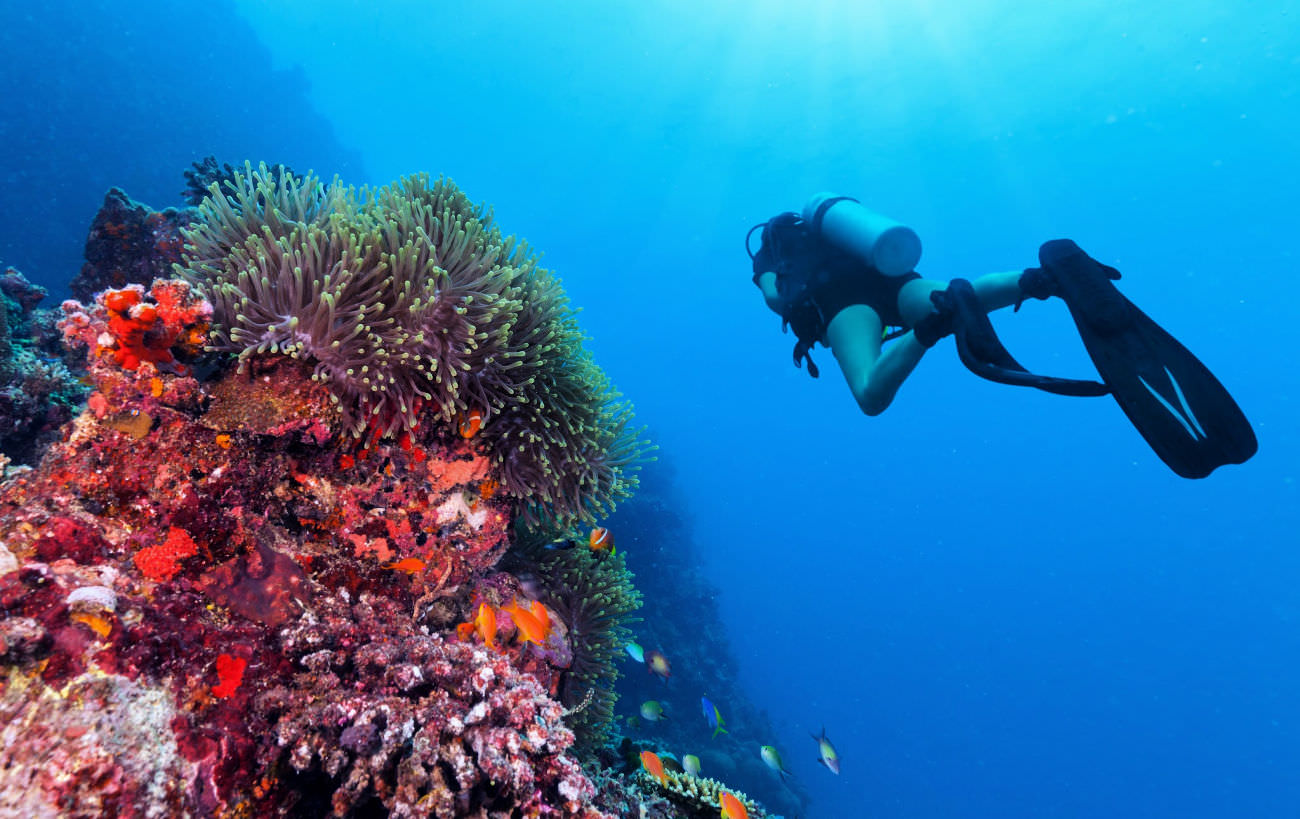 Scuba diving is one of Jeju Island's exciting activities

The Olle trail follows the one beside Udo Reservoir up to Udobong Peak, the highest point on the island. Taking this trail, you will experience the expansive, beautiful fields of technicolor flowers (glovers and poppies) and green leaves.

The best time for hiking is from 9 AM down to 6 PM in summer.

The hiking trail or course is doable by all ages who are willing to enjoy and do this exciting outdoor exercise. Since you will be walking on some road areas, watch out for passing cars and bicycles.

The total distance is about 11 kilometers and could take 4 to 5 hours to accomplish. Piece of cake, right? Here is the trail and distance guide:

Please, find the specific fees per person who will be admitted after paying the fees.

For a round-trip fee, fees vary according to the age bracket of the visitor...

For the one-way trip, here are the fee tips...

If you are taking your vehicle or bicycle to the island, you have to pay a separate fee.

No need to worry about washrooms and other facilities as the island is equipped with the necessary supplies, including electricity and internet connection.

Getting to Udo Island

If you are coming from another territory or country, you need to fly to any international airport in South Korea, including the Incheon International Airport.

Then you might have to make a connection flight to Jeju International Airport.

By Bus and Ferry
Once you are on Jeju Island or Jeju-do, you can easily take the public vehicle to Udo Island. Here's the specific guide...

Then take the ferry for either Cheonjinhang Port or Haumokdonghang Port on Udo Island. The ferry travel takes between 10 to 15 minutes.

Take the intercity Bus 701 to the Seongsan Port entrance area. It takes around 85 minutes to get there.

Then take the ferry for either Cheonjinhang Port of Haumokdonghang Port for Udo Island, which could take more than 10 minutes.

From Seogwipo-si to Cheonjinhang Port
First, take an intercity Bus 701 at Seogwi Intercity Bus Terminal to the Seongsan Port Entrance area. Walk for more than 10 minutes to the port area.

Take the ferry for Cheongjinhang Port or Haumokdonghang Port on Udo Island.

It takes around 15 minutes to get to Udo Island from any ferry departure areas in Jeju Island. Yes, it is not far, and you can see it from where you depart.

Wishing you have a wonderful trip to Udo Island attractions. Thanks for reading and share your experience with us later on.