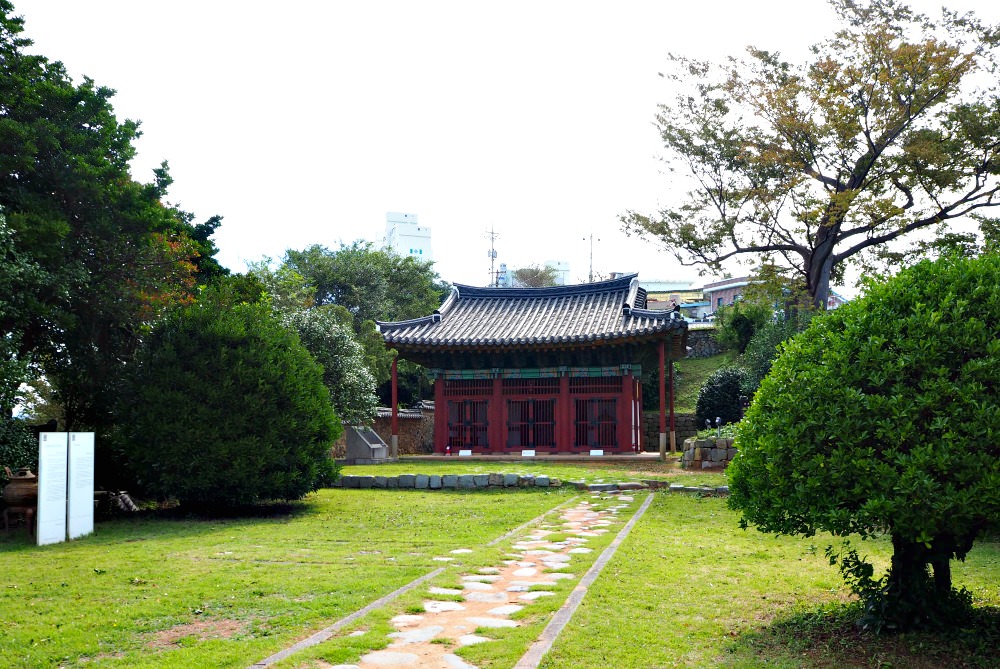 The pavilion and garden of the site

The Yi Sun-sin Victory Steles Pavilion is a historically interesting and relevant structure and place in the hill of Yeosu City. The pavilion overlooks the 'yeo' (beautiful) 'su' (water), the beautiful sea, of Yeosu City and the Hallyeohaesang National Park.

The Yi Sun-sin Victory Steles is a national treasure that portrays national independence and bravery. The site symbolizes courage, freedom, and victory over foreign invaders.

The site is called Gosodae. It was here that Admiral Yi Sun-sin gave military orders.

Inside this site, you can see the three steles: Stele of Victories, Dongnyeongsogalbi Stele, and Tarubi (more descriptions below).

I am fortunate to have spent time and explored the site, which is located just opposite the related historic site--Jinnamgwan Hall. 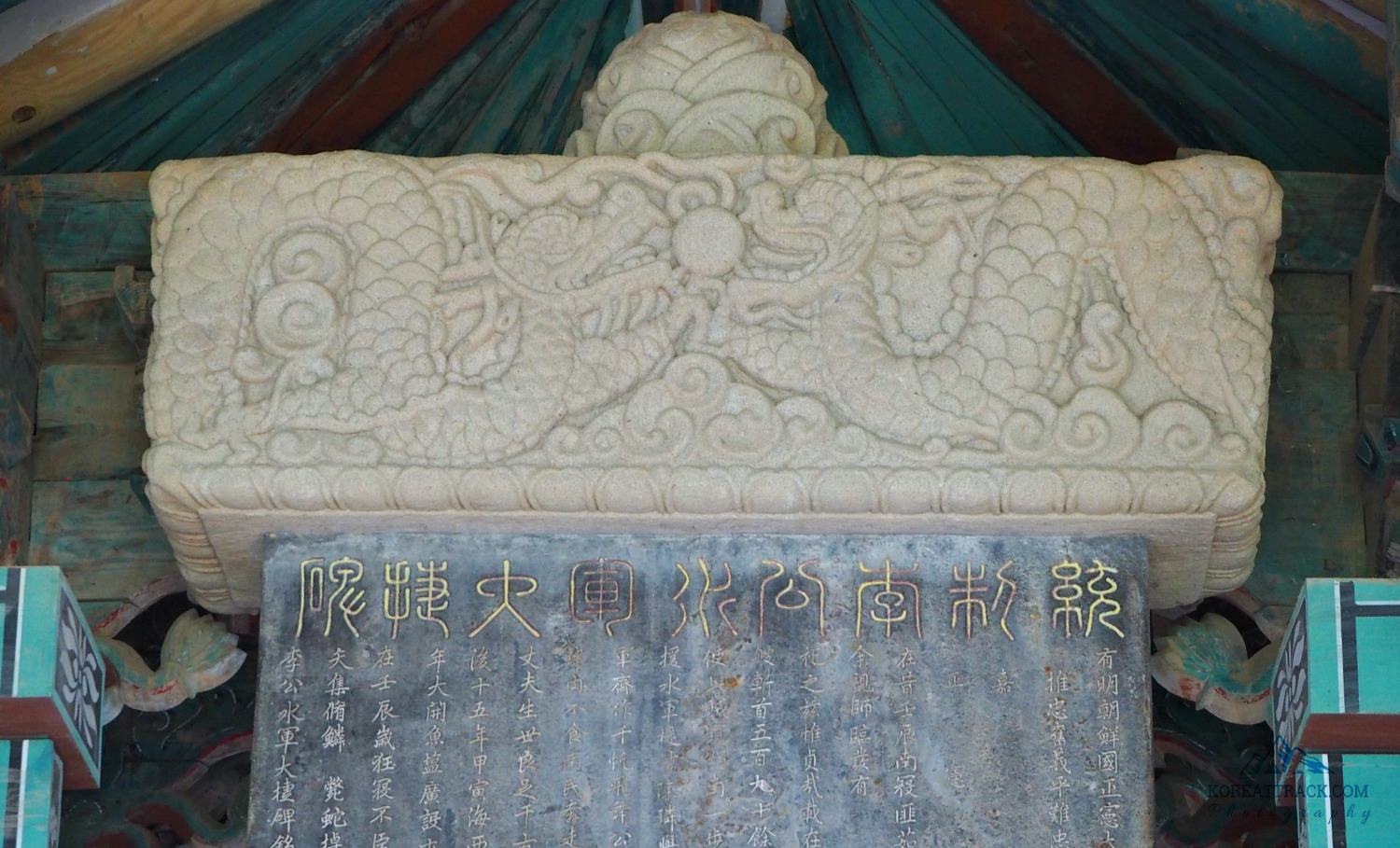 I would not have missed the opportunity if the Jinnamgwan curator didn't tell me about this memorial site. She was very persistent and was glad she did ^^.

Yes, I went, and here's my brief information...

That's right! It is very accessible as the transportation system in South Korea is well-established. You can get around pretty quickly and without having to wait for your next bus or train. 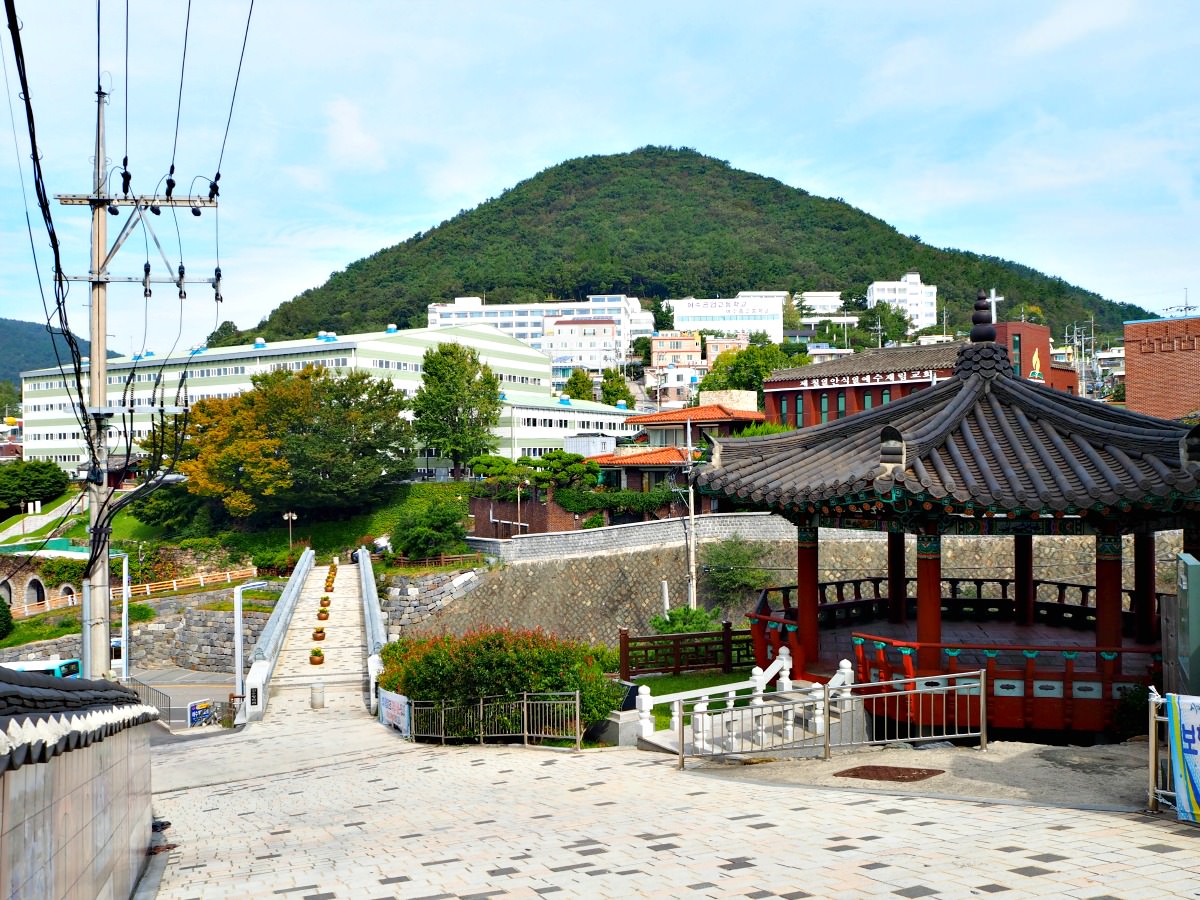 The street view from the site overlooking the Jinnamgwan Hall

Yes, I call it a memorial garden because it is like a garden (not really a flower garden per se). Although I didn't see any flowering plant (it was Fall season), I presume they plant beautiful flowering plants that bloom during the Spring.

Entrance Gate
The traditional Korean gates are always attractive for me to watch. Of course, you can see them almost everywhere, but they don't bore me. Probably because I somehow understand its historicity, meaning, and symbolisms (I'll write about this later on).

So, just like other gates, the Yi Sun-sin Victory Steles entrance gate is your only way to get inside. BUT, for me, it is not only a passage but a symbol and gesture that you, as a visitor, must honor and pay tribute to the symbolic victory treasures inside the site.

If you are not ready to pay respect and honor the place, then maybe you should not enter. And for you to understand and appreciate the meaning and symbolism of the site, you might have to learn a bit of history about this national hero (more on this below). 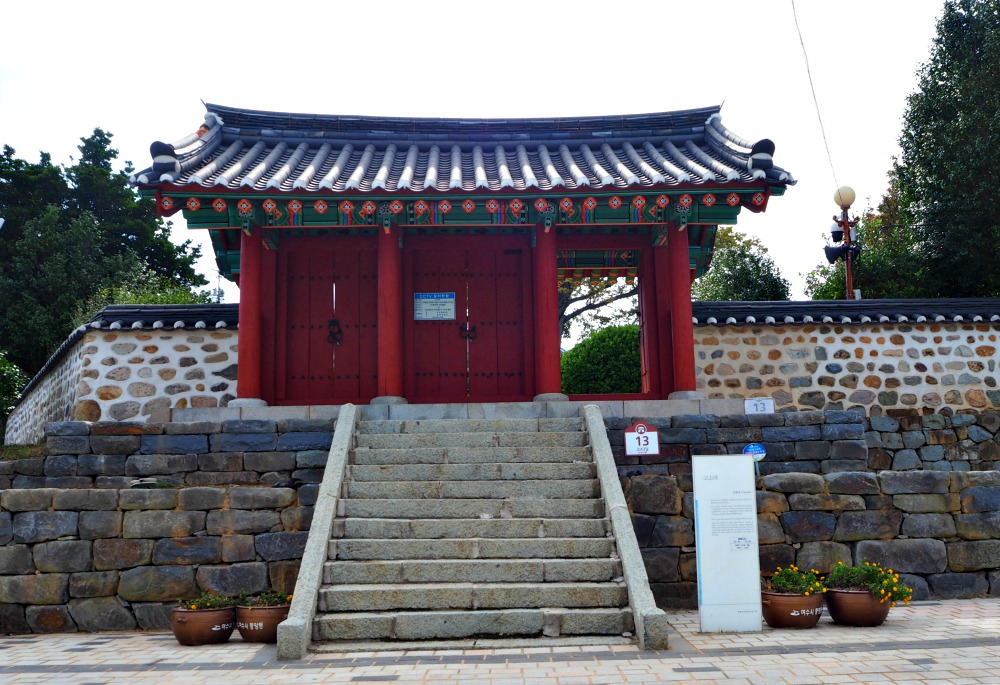 Green Lawn. Yes, since I paid respects and explored the site during early Fall, I could still enjoy the green grass of the flat ground in front of the structure that houses the three steles.

The patchy concrete blocks can serve well, mainly when the ground is wet or icy. By the surrounding walls, you can also see some trees, some of which bear flowers during the Spring season. 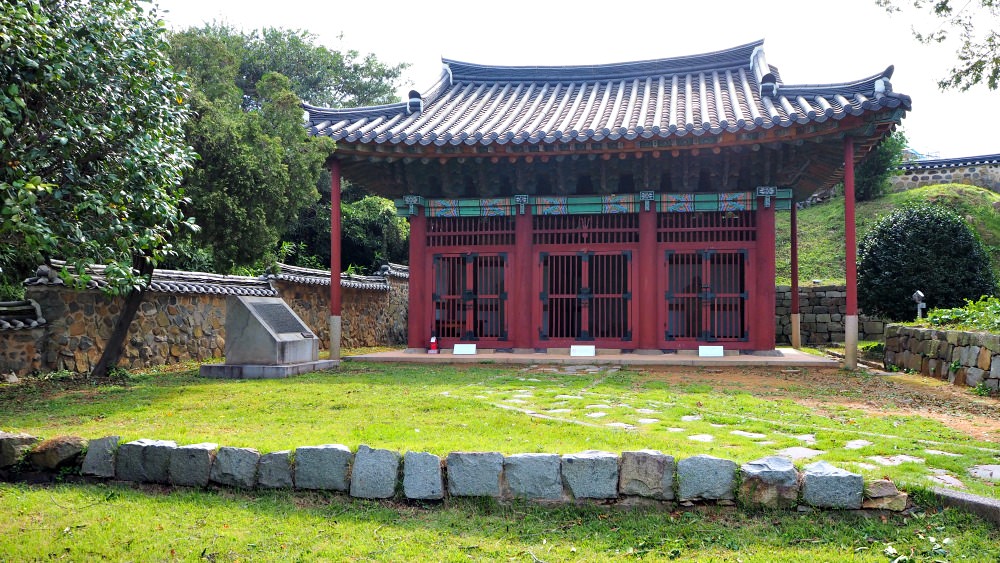 The garden and pavilion that houses the victory stele 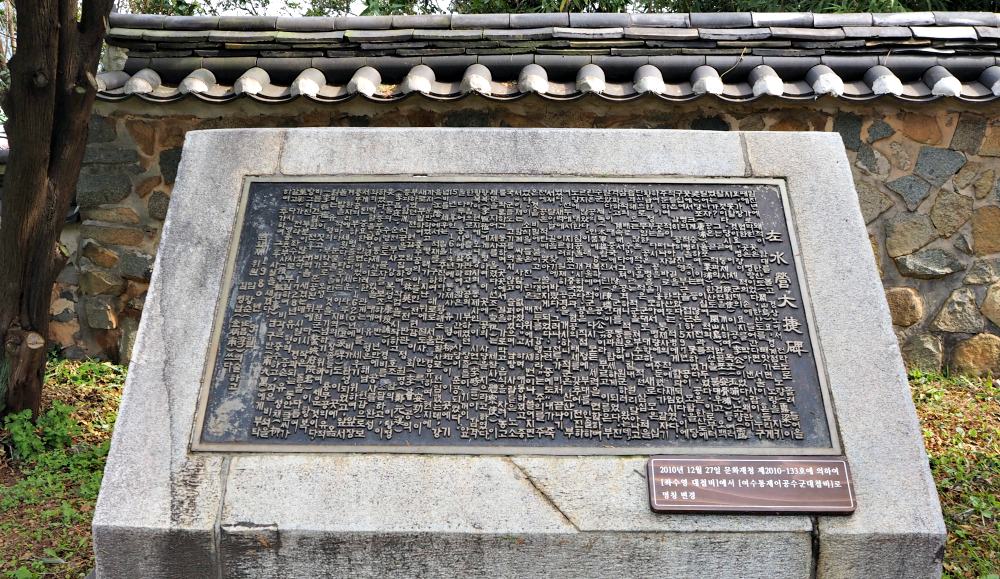 Korean descriptions of the stele and site

Old Tree. On the left-hand side of the structure, facing the entrance gate, you can see and old tree. It is believed to be 270 years old when it was first officially registered in 1982.

The tree, a Zelkova species, is about 22 meters high.

I found it interesting to see ancient trees in historical places, such as in old temples. 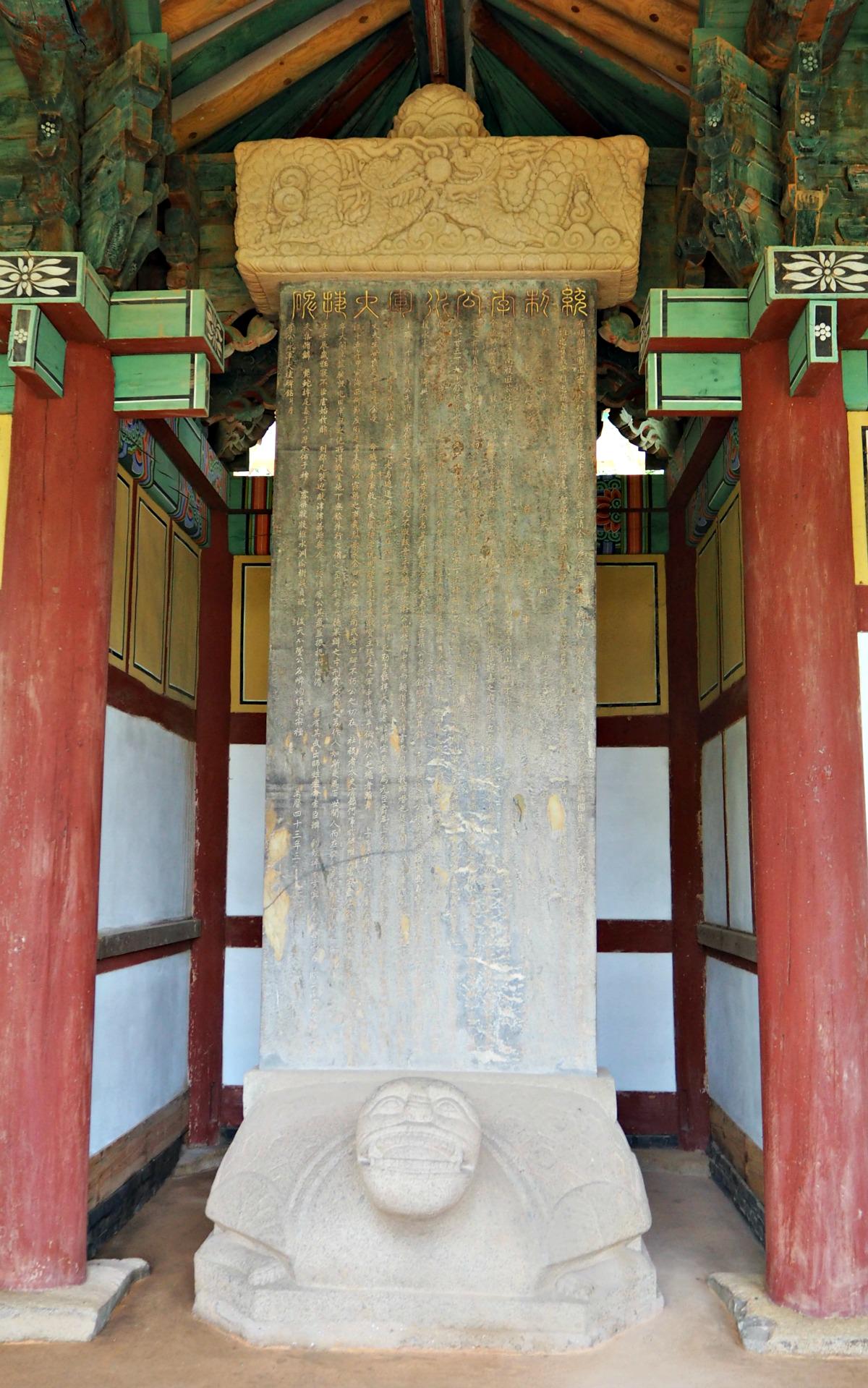 Three steles are being housed in this memorial site. As you can see, the granite steles are under the protection of a traditional Korean-style building.

A Korean house with this similar design is called 'hanok' in the Korean language (which is now, sadly, not a traditional design in Korean houses or apartments).

The stele of the left, when facing the entrance gate, is called the Dongnyeongsogalbi. This stele records the reasons why the main stele (Victories Stele at the center) was erected.

The stele on the right, when facing the entrance gate, is called the Tarubi. His followers created this stele after his death in the Battle of Noryang.

And the stele in the middle, the tallest stone stele in the country, is specially dedicated to the hero himself, Admiral Yi Sun-Sin.

It is the Stele to Victories of Admiral Yi Sun-sin, and obviously the central stele in this site.

The stele looks grand and imposing. I believe it's because of the person's stature and achievement in life. He was an example of an altruistic person--one who thinks not of himself but for others, the people and nation.

"Erected in 1615 to commemorate the achievements of Admiral Yi Sun-sin and his crews, this is the tallest stele in Korea.

After being appointed Army Commander-in-Chief of Hwanghae-do Province, Yu Hyeong, who served under Admiral Yi Sun-sin, sent the best quality stele stone available in Hwanghe-do here for the stele dedicated to Admiral Yi Sun-sin. Yi Hang-bok, a framed literati-scholar who served as prime minister, composed the epitaph, which was written by Kim Hyun-sung, the most brilliant calligrapher of the time.

In 1942, a Japanese police chief in Yeosu demolished the stele pavilion and hid both this stele and Tarubi. They were later found on the ground of Gyeongbuk Palace in Seoul in 1946 and restored to their present place in 1947." 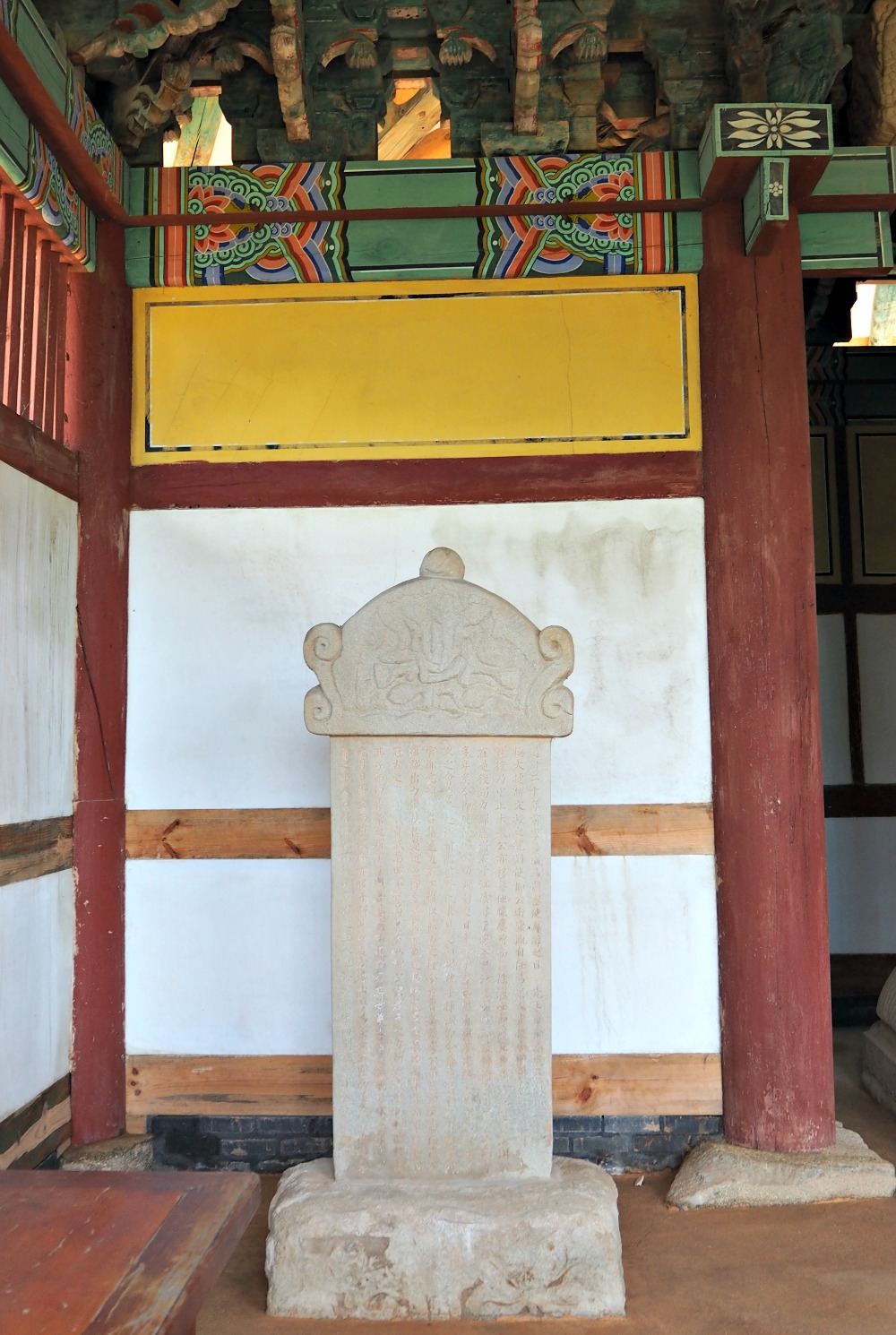 "Built in 1698, Dongnyeongsogalbi bears an inscription stating the reasons for (the) erection of the Stele to Victories of Admiral Yi Sun-sin in 1615, names of the people who joined the erection of the stele, and the difficulties encountered during the process, which were recorded by Sim In-jo, a magistrate of Jinan." 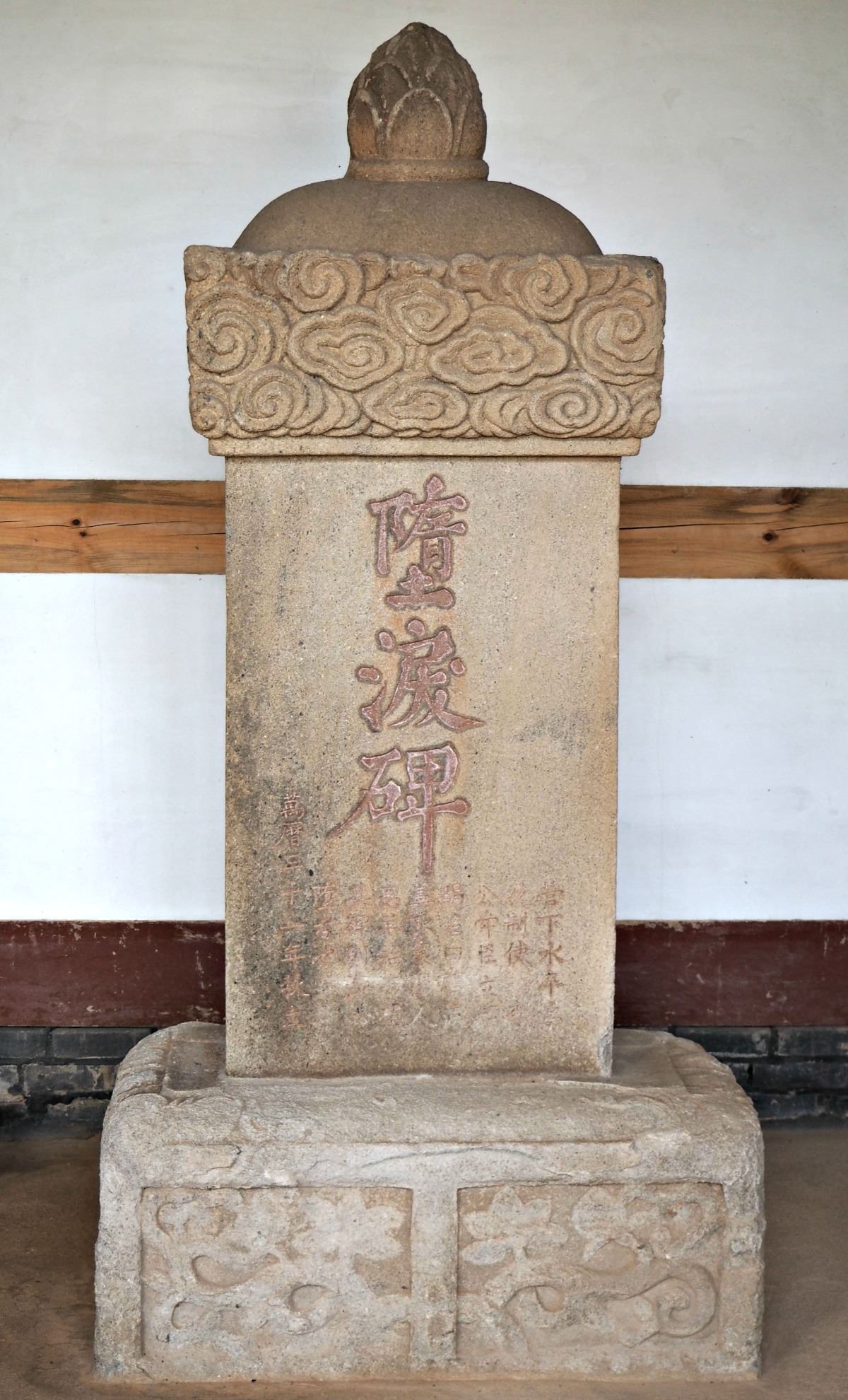 "Tarubi was erected by subordinates of Admiral Yi Sun-sin in 1603 in tribute to him. Taru meaning 'shedding tears,' was taken from an old Chinese saying, "He who does not shed tears after reading this stele is not loyal enough." The loyalty of Admiral Yi's men is almost palpable in the name of the stele". 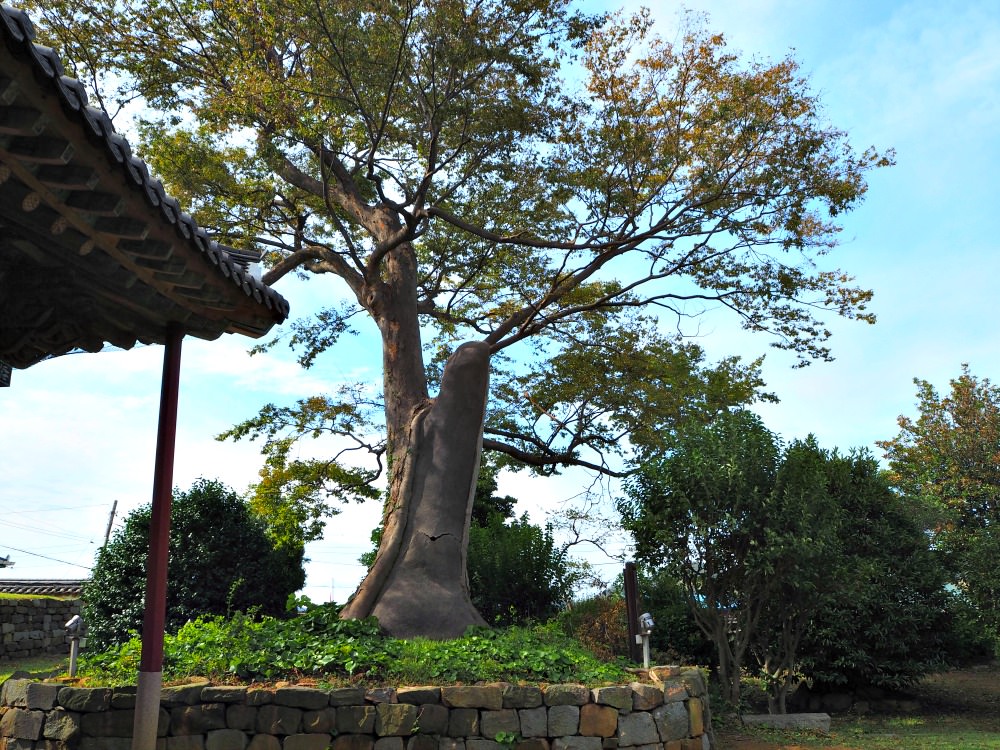 Old Zelkova Tree beside the pavilion

Surrounding Views. Yes, from where you stand, you will have great views of Yeosu's panorama, views of the bridges, islands, and sea.

A beautiful view of the port areas, small buildings, and the streets can make one feel great. Such views are accessible from the entrance gate area.

Mural Village. The mural village is located close by the memorial site. Go to your right and enjoy some neat and well-managed narrow paths leading to the corners and nooks of the village with a mixture of traditional and some modern but small houses.

Now, let me describe a bit about Yi Sun-sin to help you get to know a bit and appreciate this hero. And probably, you will start thinking of exploring this place, and Yeosu.

Admiral Yi Sun-sin became famous for his victories against the Japanese fleet that invaded Korea during the Imjin War in the Joseon Dynasty period.

It was known that Yi was not trained as a naval officer, but the enemies at sea never subdued him. Under his command, it was believed that he never lost a single ship.

Most of his battles happened in Yeosu, where he also established his naval control center, which is called the Jinnamgwan Hall.

Admiral Yi Sun-sin held a title, Samdo Sugun Tongjesa, which means "Naval Commander of the Three Provinces." Indeed, he was protecting three provinces in Jeolla Province. The title was used for the Korean navy commander until 1896.

Throughout his service, Admiral Yi fought more than twenty times. Most of these naval engagements were against the Japanese. 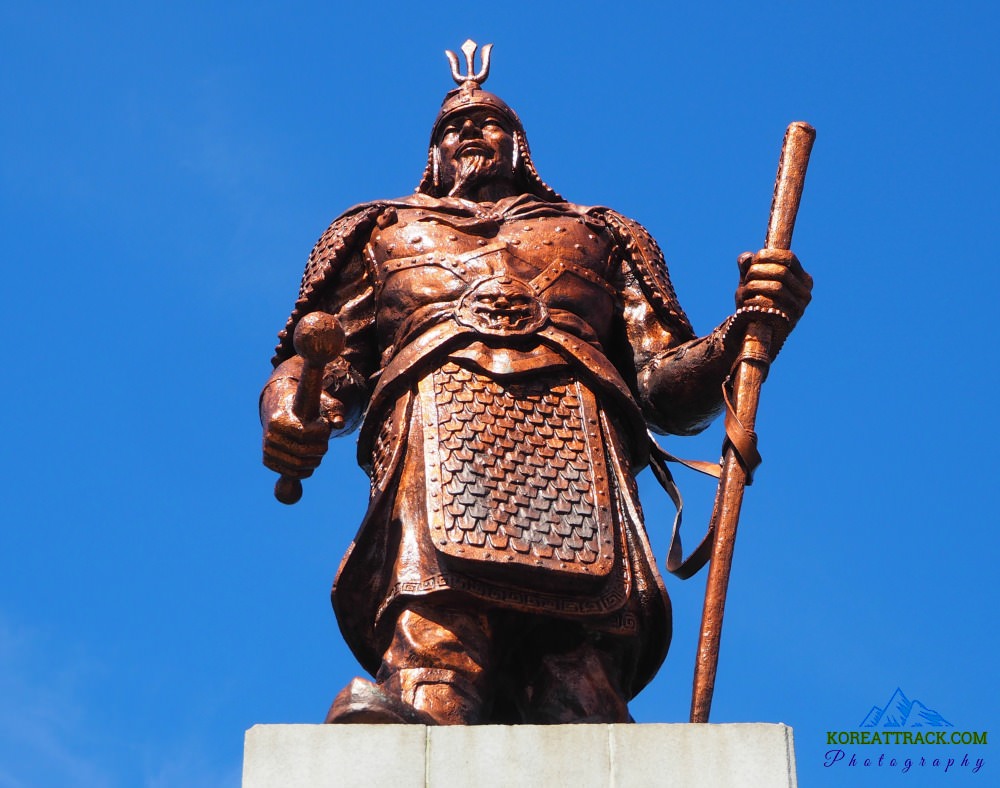 Admiral Yi's most famous victory happened at the Battle of Myeongnyang. It was believed that 133 warships of the Japanese outnumbered his fleet of 13 warships. Despite that overwhelming situation, he successfully destroyed 30 Japanese warships and himself without losing a single ship.

However, his service and bravery ended when he died of a gunshot wound during the Battle of Noryang on December 16, 1598.

Due to his victories, he was honored and given titles such as the Duke of Loyalty and Warfare (Chungmugong), First Class Military Order of Merit (Seunmu Ildeung Gonsin), and posthumous offices--Prime Minister and Prince of the Court from Deokpung.

Of course, the Yi Sun-sin Victory Steles garden is one of the symbolisms that people recognized his achievements, although the royal court didn't officially acknowledge during his period.

I hope this has made you start thinking about visiting this historical area in Yeosu. I would be glad to answer if you have questions or any clarifications.

Thanks, and enjoy your travels.