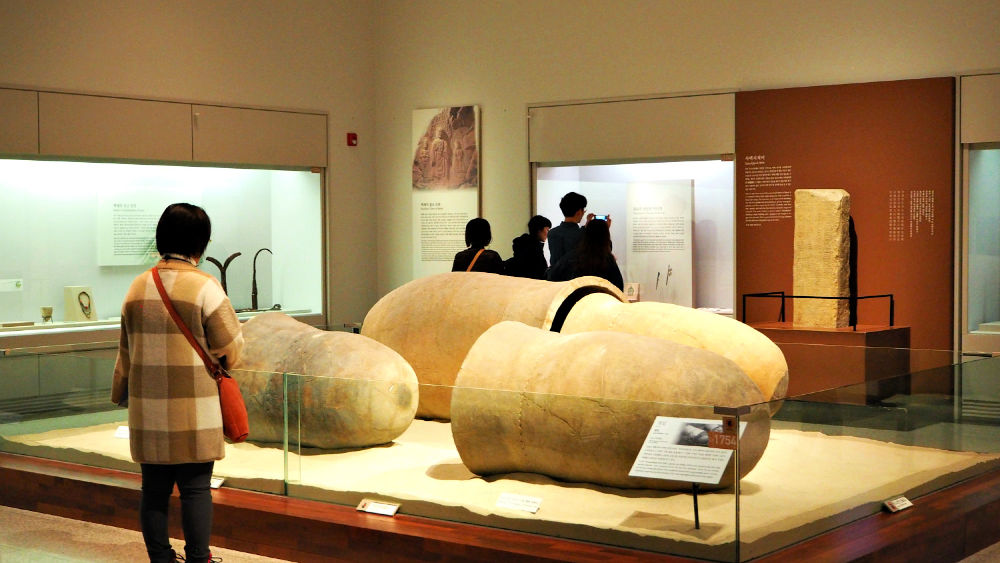 Clay jar coffins of the Baekje Kingdom. See them at the National Museum of Korea in Seoul [Abbie]

The Three-Kingdoms Period - Baekje Kingdom
Baekje Kingdom (also Paekche) existed from around 18 BC to 660 AD. It was one of the Three Kingdoms, including Silla and Goguryeo.

The Baekje Kingdom was established in southwestern Korea. It was founded by Onjo, the 3rd son of Jumong, the founder of Goguryeo Kingdom.

Brief features and achievements of the Baekje Kingdom...

This article aims to show you briefly Baekje Kingdom's achievements. Basically, it describes the kingdom's history through the photos I took from the National Museum of Korea in Seoul.

Hope this small introduction of this 'kingdom' will give you some insights into the beginnings, culture, art, and way of life of Baekje people

After Goguryeo Kingdom's exhibition rooms, I immediately moved towards the next 'kingdom' room, which is called Baekje. I was in a bit in a hurry since I thought that I have a lot to cover in this first visit, and I was hoping to finish the Three-Kingdoms Period exhibitions.

Baekje Kingdom
Baekje was an ancient kingdom founded by Buyeo immigrants settling down in the Hangang River basin. It had grown into a full-fledged kingdom by gradually consolidating the Mahan region.

The Hanseong period (BCE 18-CE 475) was the period when the country established the system of an ancient kingdom and expanded its territory to Mahan, and laid the groundwork for Baekje.

The Ungjin period (475-538) was a period when Baekje restored its weakened national power due to the southern expansion of Goguryeo and established the foothold of its revival.

The Sabi period (538-660) was the time when the country's culture flourished the most. It was considered the glory days of Baekje culture as Buddhist culture brilliantly blossomed.

Baekje culture, as Buddhist culture, international yet refined, was introduced to Silla, Gaya, and even Japan. It mainly had a lot of influence in forming the Asuka culture in Japan. 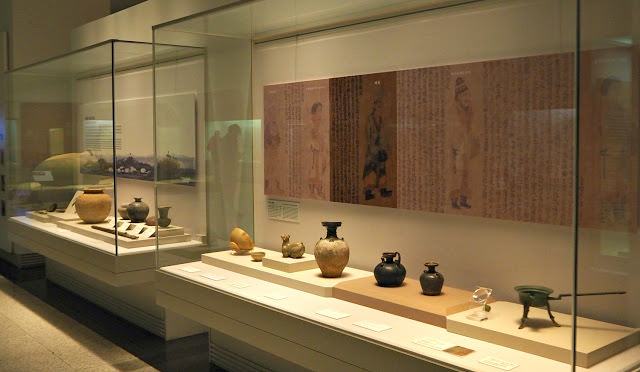 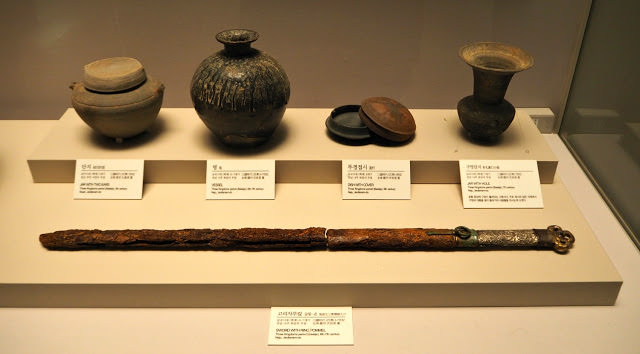 Potteries and a sword

According to Samguksagi, Baekje was founded in BCE 18 by King Onjo, the son of Goguryeo's founding Jumong.

There are different opinions about the location of Hanseong, but large-size dwelling sites, building sites related to rituals, and roads were discovered to show how the capital of Baekje looked like.

Earthenware such as tripod pottery, mounted dish, and the black-polished jar was produced, and original shapes and technologies were also introduced.

Roof tiles were created based on the existing earthenware production technology, and the inlay technique was prevalent in the production of ironware.

Also, the advancement of agricultural implements made of iron brought about an increase in agricultural productivity. 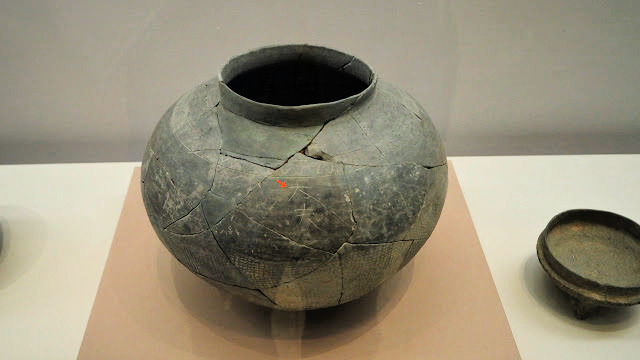 A clay pot with etched Hanja (Chinese characters) on it 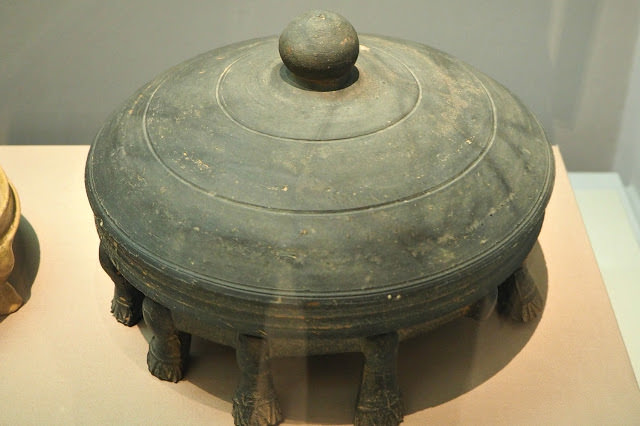 A cauldron with legs made during the Baekje Kingdom

Amazing Gilt-Bronze Cap
A Baekje gilt-bronze cap is a decoration symbolizing one's social status. It was usually found in the tomb of rulers.

Its form takes on a cylindrical shape, and there are some caps with prong-shaped ornaments attached to them.

There were many cases where the gilt-bronze cap was buried with high-quality articles such as gilt-bronze shoes, and Chinese ceramics.

They are usually found in relics of the period when Baekje was consolidating the Mahan confederacy. 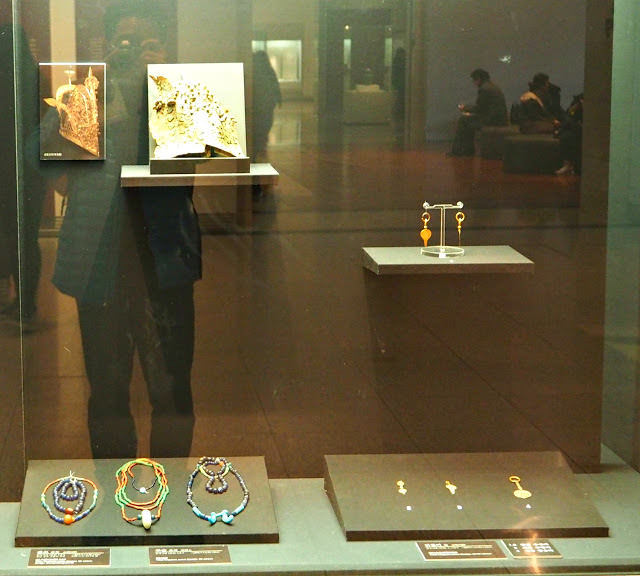 Baekje Kingdom's gilt-bronze cap and other accessories including gold earrings, necklaces, and bracelets

They have not only adopted advanced culture from China, and creatively developed it but also introduced it to Japan.

Sea routes played an essential role in the foreign trade fro the Baekje. The Jungmakdong remains in Buan had been a place where religious services were held to pray for a safe voyage.

This was also a strategic location connecting Japan, the southern and western coast of Korea, and China. In addition to this, Baekje performed various forms of national religious services, including services for the ancestors.

Baekje's Regional Controls
The geological conditions of the Yeongsangang River basin, namely being close to the seas while also being situated amidst rivers and fertile plains, gave rise to robust communities.

These people gradually came under the influence of Baekje as the kingdom expanded its power to the south.

The people who built these tombs are assumed to be regional Baekje powers who exercised influence based on their economic power from the Yeongsangang River basin. 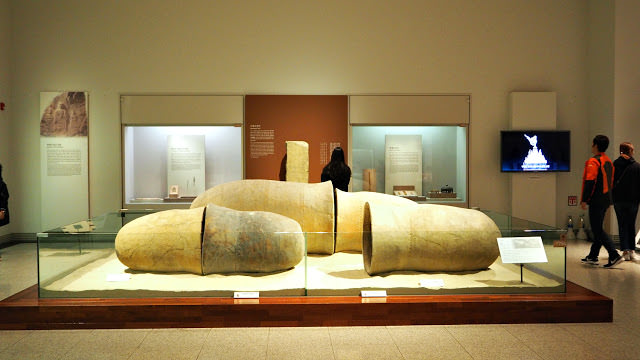 During the reign of King Muryeong, when the kingdom recovered its stability with the balance between the royal authority and aristocrats, enjoys were sent to the Liang of Southern Dynasties to strengthen diplomatic ties.

Baekje succeeded the culture of the Hanseong period during the Ungjin period and brought in Chinese culture and introduced it to Silla, Gaya, and Japan.

It was the period when Baekje restored its national power and laid the groundwork for revival.

Moving on From Ungjin to Sabi
King Seong (r. 523~554) who ascended to the throne after King Muryeong moved the capital of Baekje to Sabi in 538 and established a foundation for national prosperity.

Politically, he reorganized the governing system of the central government and regional provinces to establish a governing political system centered on royal power.

The Sabi period reached the height of Baekje culture, which had been accumulated over the years from the Hanseong period, and in art and religion, Buddhist culture brilliantly blossomed. 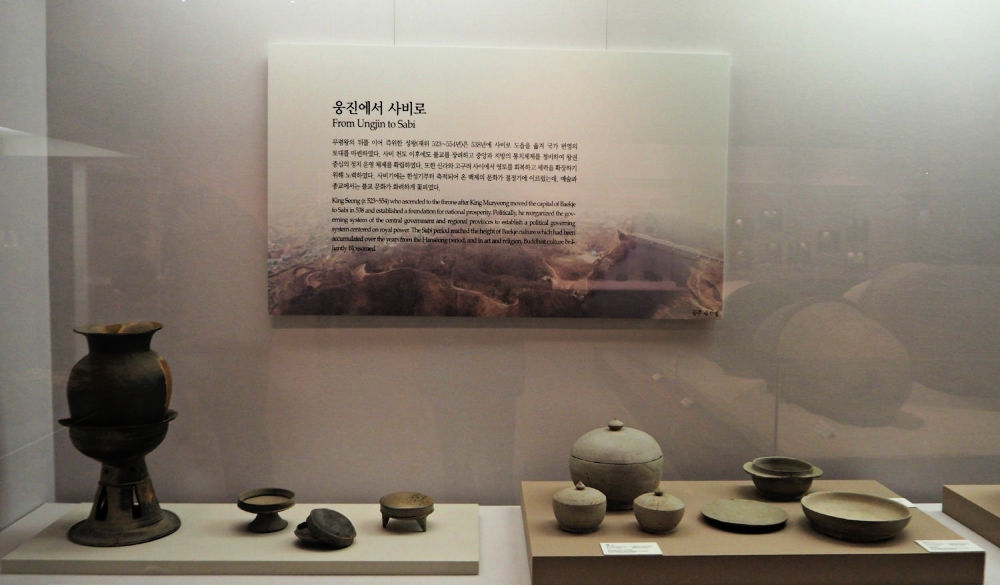 Clay potteries and an incense burner

The inner part of the fort consisted of 5 bu areas, where the existence of bu was verified through rocks, roof tiles, and wooden tables etched with the name of the administrative regions.

It is assumed that the royal palace site had been located on the southern foot of Mount Busosan.

Buddhist Culture of Baekje
Buddhism was introduced to Baekje from the Eastern Jin of China during the first year (384) of King Chimnyu's reign in 384.

Of particular note, it can be seen that Buddhist culture flourished during the Sabi Period as many Buddhist temples such as Jeongnimsa Temple and Wangheonsa Temple were built around the current area of Buyeo.

The Buddhist temples of Baekje have typical features of most temple layouts, including a pagoda and one main building where the inner gate, pagoda, main building, and hall are aligned in a straight line running north and south.

The statue of Buddha is refined and takes on a gentle appearance. Multiple metal craft works, including the Baekje Incense Burner, display the excellence and creativity of Baekje Buddhist culture. 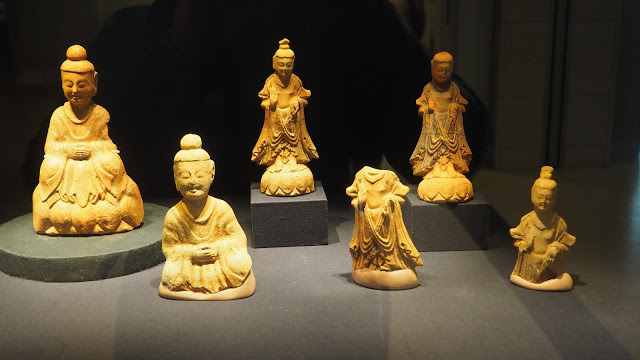 Baekje's Administration of Iksan
King Mu (r. 600~641) was a king who decorated the glory days of Baekje culture, and there are many relics related to King Mu remaining in the area of Iksan.

The Wanggung-ri remains were initially constructed as a royal palace but were later changed into a Buddhist temple. Twin Tombs were stone chamber tombs made in the 7th century.

The wooden coffin buried together was made out of Japanese umbrella-pine, and the coffin ornaments are also extravagant. The Mireuksa Temple is a Buddhist temple built with Maitreya's belief as its background.

It is the largest Buddhist temple in the Three Kingdoms period. Iksan was an area regarded as a significant location until the fall of the Baekje royal family.

Ornaments of Baekje Aristocrats
Ornaments, apart from its function of beautifully decorating the body, displayed the social status of the person wearing it.

The ruling class of Baekje used various ornaments, and the representative ones were silver diadem ornaments and belt ornaments.

The silver diadem ornament was a long strip of a silver plate made into a branch with flower bud decorations. It coincides with document records showing that the hats of aristocrats were decorated with silver flowers.

Jar Coffins (9th Tomb at Sinchon-ri excavated in Naju in 1917)
In the Yeongsangang River basin, gigantic jar coffins, which were buried in pits with high earthen mounds, were standard in the 4th and 5th centuries.

From the jar coffins, gilt-bronze crowns, gilt-bronze shoes, necklaces, swords with a ring pommel, and so on were unearthed, suggesting that the occupant of the tomb was highly influential in this region. 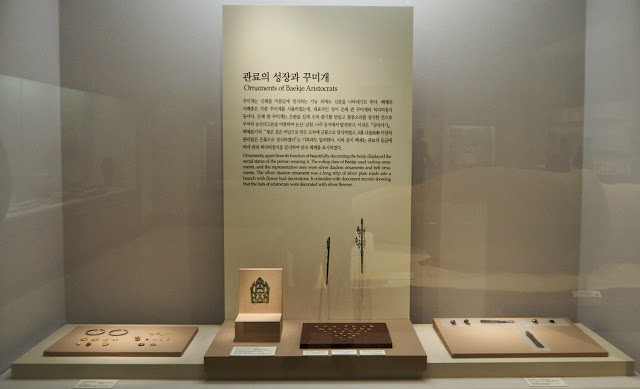 Accessories of the aristocrats during Baekje Kingdom's golden age

Stele (a replica)
This is a stele discovered at Busosanseong Fortress at Buyeo. It is assumed to have been made during the 14th year (654) of King Uija's reign.

The characters were engraved by trimming one side of granite rock and dividing it up into rectangular sections, and then etching the letters.

Currently, only four lines remain, and each line has fourteen characters engraved vertically. The motive behind a person named 'Sataekjijeok' building the main building and a pagoda of the temple is engraved on the stele.

This is an excellent material for having a glimpse into the stele and calligraphic style at that time. 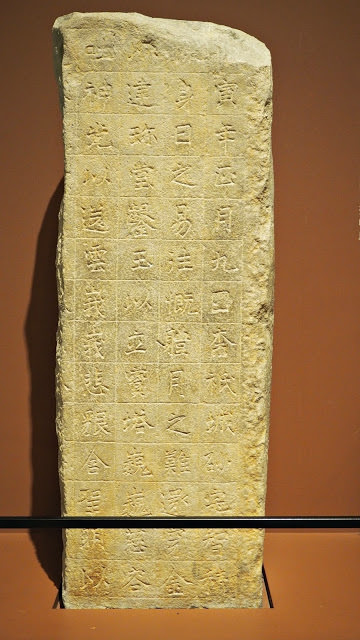 A stele discovered at Busosanseong Fortress at Buyeo. It is assumed to have been made during the 14th year (654) of King Uija's reign (replica only at the National Museum of Korea).

Characters of Baekje
The epigraph of Baekje becomes an excellent material for showing the historical facts of the time through the characteristics of excavated remains.

The wooden tablets substituted for the paper before the paper was invented as letters were written or etched with knives on long and thin pieces of wooden boards.

These wooden tablets were widely used for uncomplicated document records or tags and graffiti or writing practice.

At Pungnaptoseong Fortress, pottery and bricks engraved with characters were excavated, which confirmed that Chinese characters were used even during the Hanseong period. 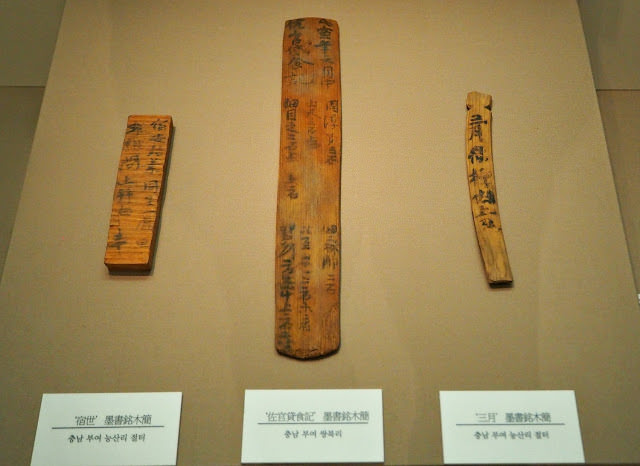 Simple etched records in Chinese characters made during the Baekje Kingdom period.

Designed Bricks
There were eight kinds of patterned bricks excavated at Oe-ri, Buyeo.

The rectangular bricks have a consistent size, and because there are grooves on the side of four corners, they can be fixed in connection.

Baekje's Patterned Bricks with excellent picturesque quality has excellent value as the aspects of art, architecture, religion, and even ideology at the time can be examined through these artifacts. 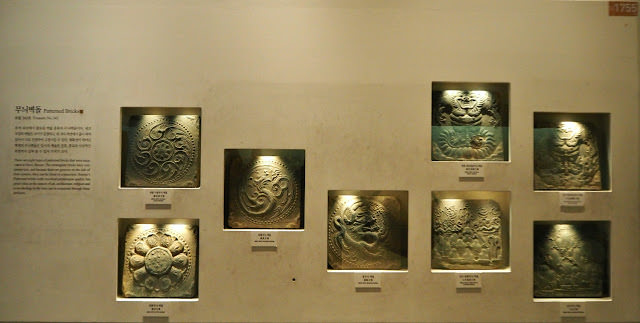 Clay bricks with patterns of various elements including mythical animals

During the Ungjin Period, the kingdom of Baekje newly adopted the roof tile production technology of Liang of Southern Dynasties.

The production of roof tiles also gained momentum as many Buddhist temples were built after moving the capital to Sabi.

The roof tile production technology of Baekje was introduced to Silla as well as Japan. Doctor Wa, who was sent to Japan, influenced the development of Asuka roof tiles. 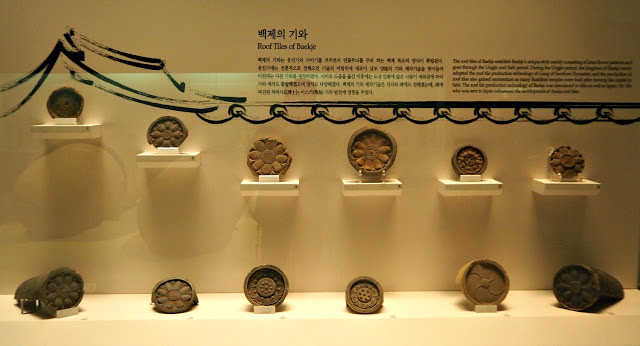 Designs and patterns of roof tiles during the Baekje Kingdom period.

You can see more artifacts made during ancient Korea's Baekje Kingdom at South Korea's national museum. Yes, they are exciting and entertaining as well as educational.

I hope this is helpful in your search for the Baekje in ancient Korea.
Have a good day!