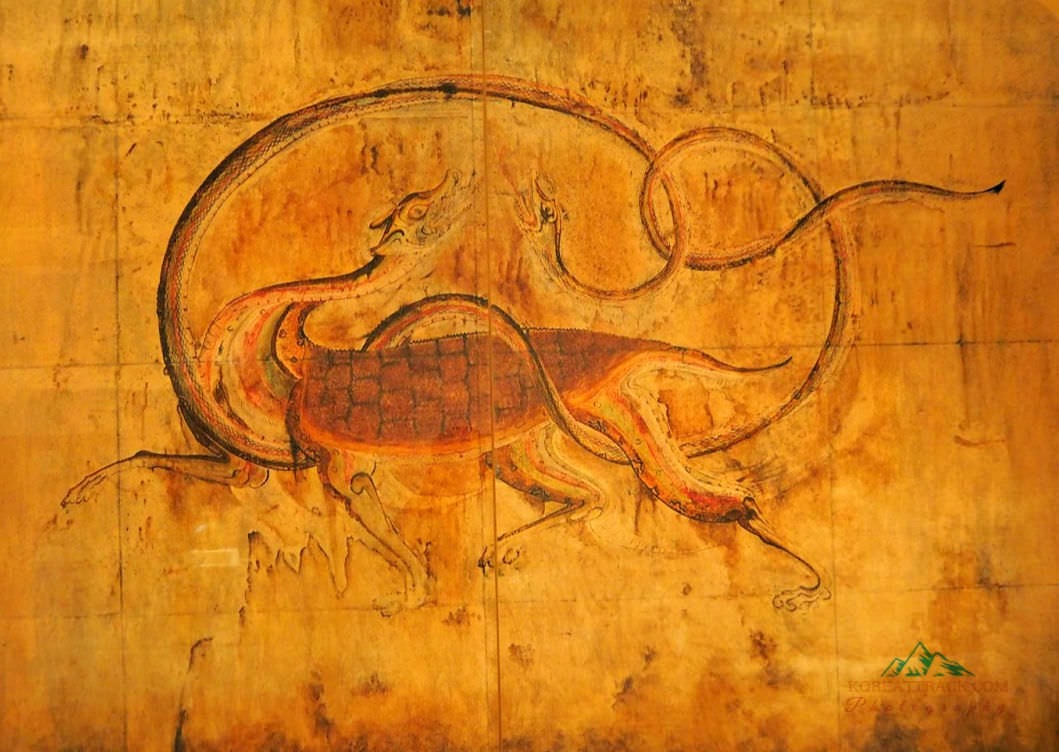 The Goguryeo Kingdom is the first among the three articles I'm going to write. Most of the descriptions here are cited from the National Museum of Seoul.

Yes, I took the photos myself and hope they help describe the history, or some parts of the Goguryeo very briefly.

The Goguryeo Kingdom[1], sometimes called Goryeo, was one of the famous Three Kingdoms in Korea that existed from 37 BCE to 66 CE. It dominated the northern and central parts of Korea and the southern and central regions of Manchuria.

Below are some of the significant features and achievements of Goguryeo...

Establishment of Goguryeo Kingdom
Having arisen from the middle reaches of Amnokgang River, Goguryeo, became the first out of the three coexisting kingdoms to establish an ancient state by territorially expanding into surrounding regions.

While maintaining its traditional culture, Goguryeo actively accepted the foreign cultures of China and other regions. Its culture, consequently, is a dynamic as well as functional.

Goguryeo culture had influenced those of Baekje, Silla, Gaya as well as that of Japan (also referred to as Wae) and it was further continued and developed by Unified Silla Kingdom and Balhae.

Life in Goguryeo
Castles of Goguryeo comprise various types of buildings, paved roads, and other facilities. A mansion of a noble consisted of a detached men's part of a house, the main building as well as a barn, garage, kitchen, storage, butchering place, and well-kept garden.

Food cooked in a kitchen was carried into rooms, and the host and guests ate at separate tables.

Hulled grains were kept in storage, which had only supporting columns on the lower floor and the main structure on the level above. People rode chariots with spooked wheels, pulled by horses or cows.

People of Goguryeo built several hundred of fortresses. In contrast with mountain castles, those built on level land were for regions around the capital city.

Compared to aggressive and defensive characteristics of mount castles, those of level land were appropriate for living. As a result, they served as centers for diverse political and administrative activities.

Capital cities of Goguryeo Kingdom had been built to include level land and mountain castles in a pair so that people could carry out their daily lives in the former and move into the latter in times of war or emergency.

Goguryeo's bronze bowl with characters in the bottom

The tomb consists of a layer of stones made on the ground surface, on which the dead are laid, and a pile of stones covering everything. The shape of this style of tomb changed from non-mound to mound to platformed-mound.

Earth-piled tombs have an entranceway with a burial chamber, and the whole structure is covered with earth. This type of tomb varies in number of its burial chambers, design of the ceiling, the location of the entranceway, and in other aspects.

Among these diverse variations, some tombs had been developed to comprise a stone chamber with mural paintings. The paintings include scenes of life customs, decorative patterns, four protective deities, and other diverse themes. 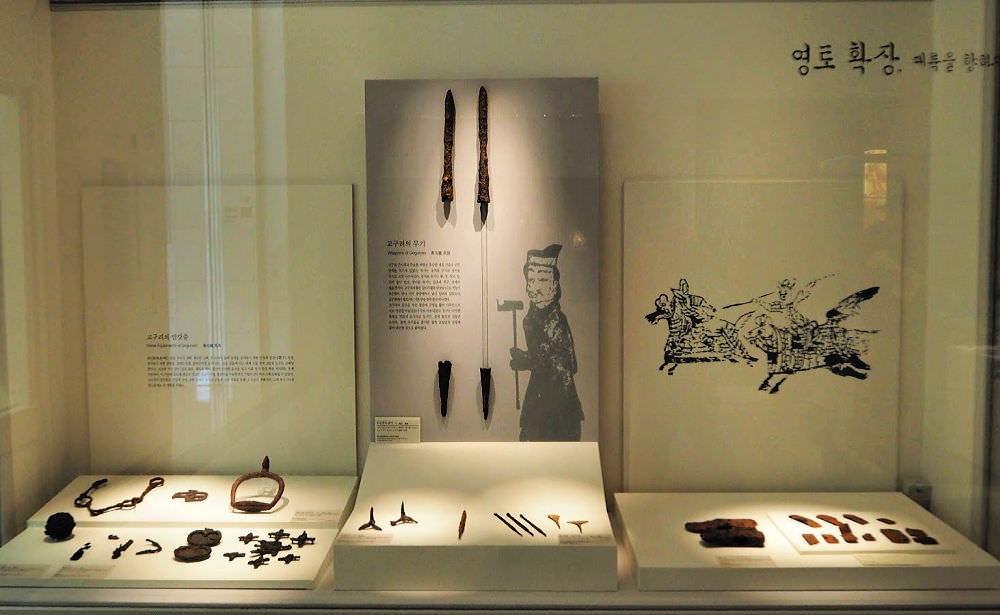 The grave faces south, and the chamber was built over the ground. It is a single-chamber tomb composed of the corridor and main chamber.

The walls and ceiling corbel of the chamber was made with huge finely trimmed granite stones. The main chamber walls were built up by piling slabs and cutting the top surfaces of the slabs in a slant direction, and the walls were designed to taper upwards.

Murals were painted immediately onto the surface of the stone walls, and the theme is the Four Guardians Deities. The Four Guardian Deities on the main chamber walls are enormous enough to cover the entire wall, having no background images. 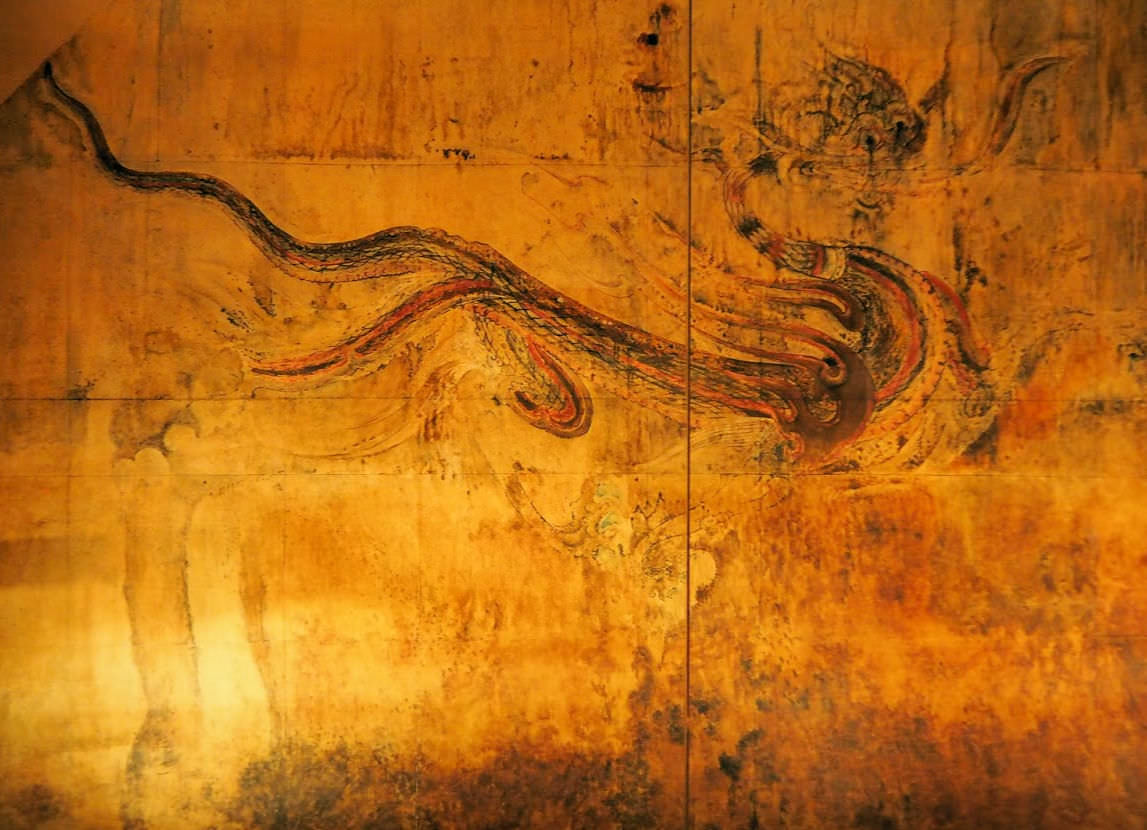 The Four Guardians Deities
The Four Guardian Deities are a pantheon of four divine beasts, namely, the Blue Dragon, the White Tiger, the Red Phoenixes, and the Black Tortoise and Serpent.

The Four Guardian Deities are gods believed to be related to the four cardinal directions, the four seasons as well as the twenty-eight major constellations.

They are said to ward off evil influences and ensure the harmony of yin and yang energies.

In the 5th century Goguryeo tombs, the Fur Guardian Deities were portrayed as symbols of the afterlife, mostly on the ceiling of the main chamber, alongside the sun, moon, constellations, lotus blossoms and other sacred beasts.

Not set practices existed concerning their representation and position, and the Four Guardian Deities, in tombs of this period, were often strange awkward-looking.

At times, they were depicted in pairs, and at other times, one or more of them were omitted.

Their representations became more sophisticated as well as natural over time, to more successfully convey the sacredness of these diving beasts.

From the 6th century and onward, the Four Guardian Deities progressively gained importance in Goguryeo's burial culture, as tomb mural motifs, to eventually become the only them of main chamber murals.

This transition marked the shift through which the Four Guardian Deities were no longer straightforward motifs representing the afterlife among many other such motifs, but rose to the status of guardians of a tomb. 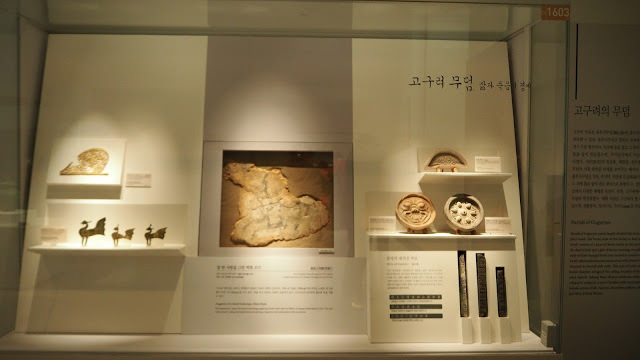 Some ornaments, painting, patterned roof tiles, among others, were typical items buried with the royals during the Goguryeo Kingdom period. 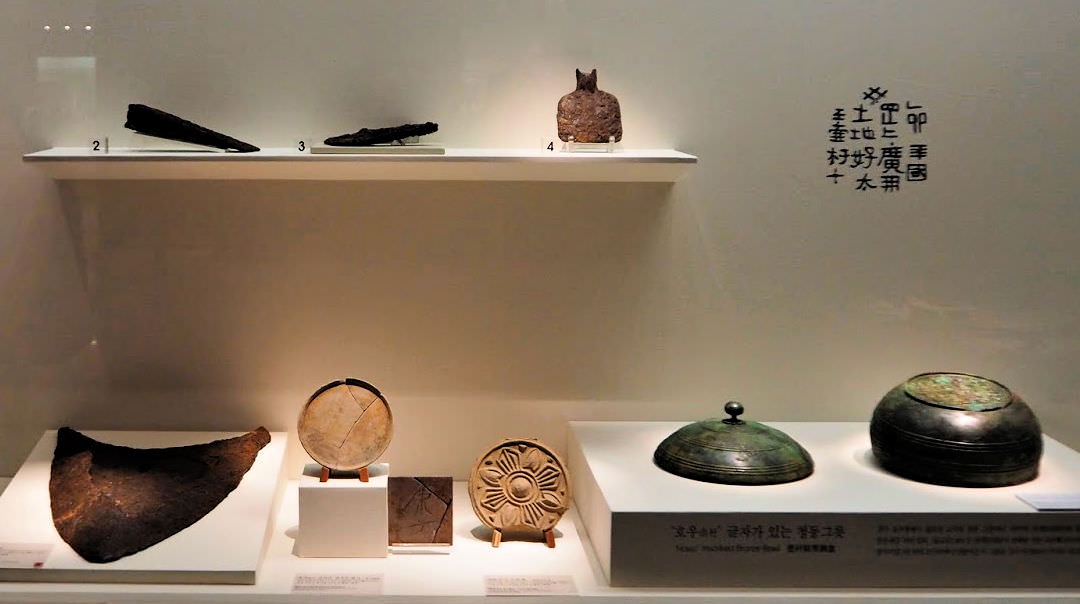 Iron Armored Cavalry of Goguryeo
The army of Goguryeo consisted of land and naval forces, and the former was further divided into cavalry and infantry.

Cavalrymen consisted of both heavily armed and lightly armed soldiers, and through skillful positioning of these men, battles were fought.

Heavily armed cavalrymen who wore iron armor and helmet, riding armored horses assumed the most crucial role in the army. These soldiers, referred to as gaemamusa (armored horse-riding soldiers), are well depicted on the mural painting of Goguryeo.

In 475, Goguryeo attached the capital of Baekje and conquered the land around Hangang River.

Many Goguryeo sites that attest to Goguryeo's southern expansion haven been discovered around the Imjingang River, the whole area of Yangju valley, lower reaches of Hangang River, and Geumgang River.

Most of these sites had been built by the Goguryeo army as small fortifications to control the traffic route. Hence they assume a military characteristic.

At these archaeological sites, located in the Achasan and Yongmasan mountain region, with the Ondol system, reservoir facility, temporary smithy, and rice mill have been found, accompanied by diverse artifacts.

By examining these sites, Goguryeo's military organization, lifestyle, as well as the method of domination, can be better understood. 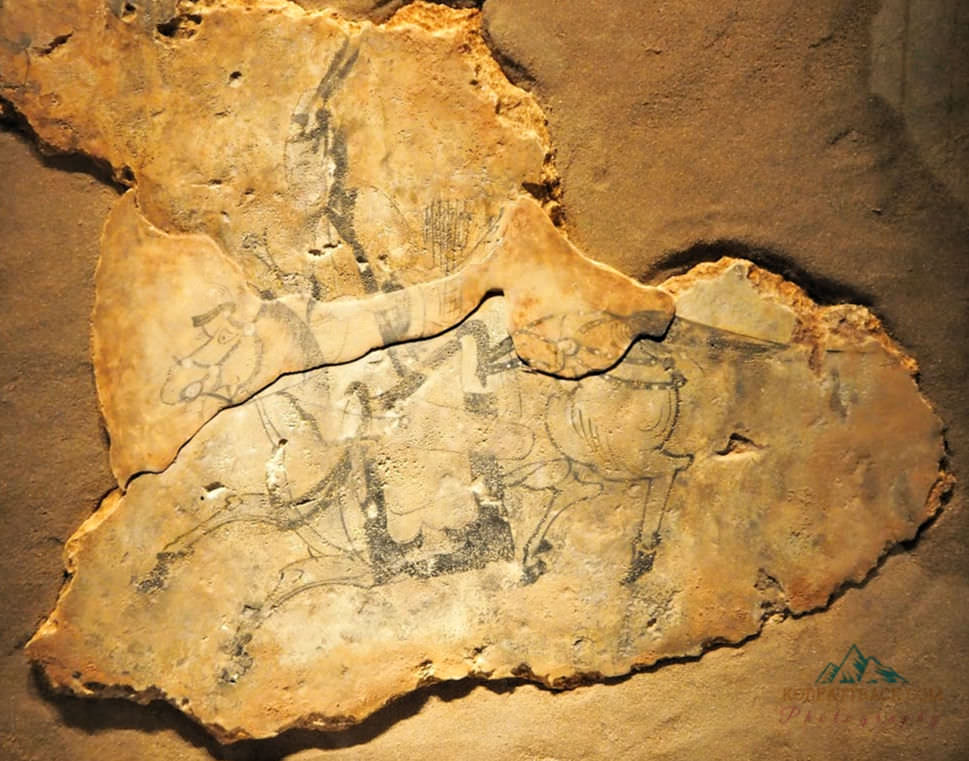 Buddhist Culture in Goguryeo
Buddhism was introduced into Goguryeo Kingdom in 372, the second year of the reign of King Sosurim (r. 371-384), in the form of Buddhist sculptures and scriptures from China's Former Qin (351-394).

Buddhist statues, either made from fine clay or cast with bronze and covered in gold, were influenced by the Buddhist art of China's Southern and Northern Dynasties period.

Elongated faces and folds characterize them in the robes that extend outwards in a dynamic manner. Approximately, 300 terracotta Buddha and Bodhisattva statues were recovered from a temple site in Wono-ri, Pyeongyang.

These are rare examples of Goguryeo Buddhist statues of known provenance that were produced after the mid-sixth century. 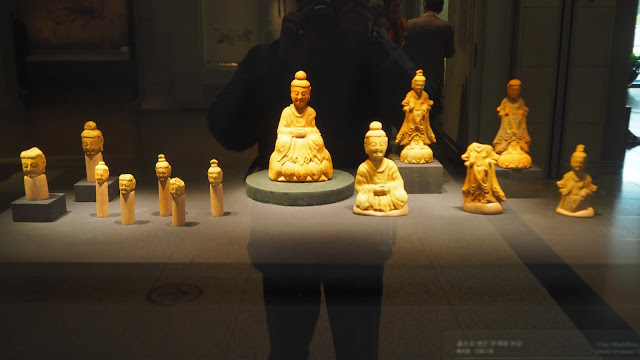 Clay Buddhas and Bodhisattvas from Wono-ri Temple
In 1937, more than 300 seated Buddha and standing Bodhisattva images were found at a temple site in Wono-ri, Pyeongannam-do. The figures are made from clay, and they date back to the mid-6th century, during the Goguryeo Period.

Buddha with Inscription of the 7th Year of Yeongga
This Buddha image, found in 1963, bears an inscription on the back that states that it was made in the "7th Year of Yeonga" (539 CE) at Dongsa Temple in Pyongyang, to spread the Thousand Buddha belief.

You can see more artifacts made during ancient Korea's Goguryeo Kingdom at South Korea's national museum. Yes, they are exciting and entertaining as well as educational.

You can check out more about the National Museum of Korea and see how to get there using public transports. It is in Seoul, so it is quite easy to find.

I hope this is helpful in your search for the Goguryeo Kingdom in ancient Korea.

Have a good day!