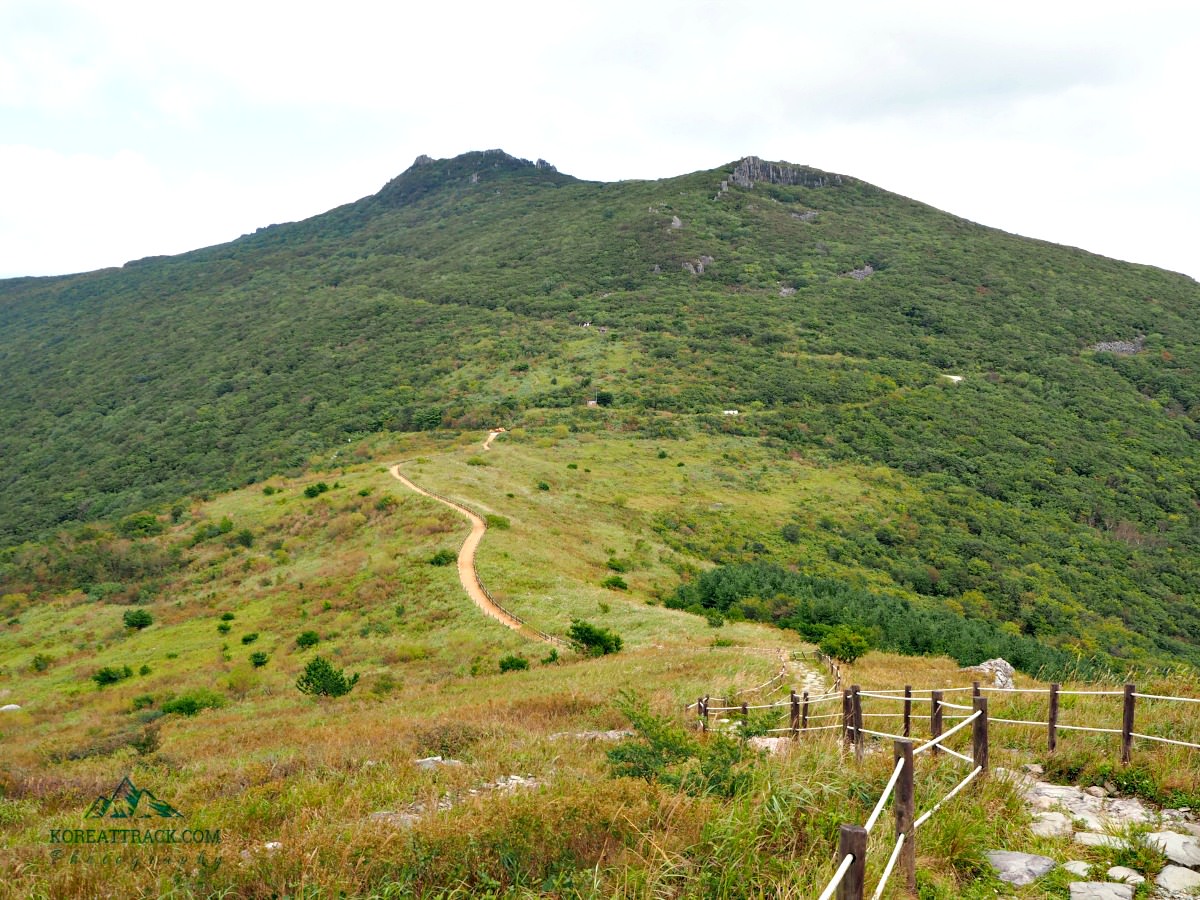 Enjoying the endless trail on the beautiful spines of Mudeungsan Mountain

Mudeungsan National Park is a majestic and popular mountainous park in Gwangju City, South Jeolla Province, Republic of Korea. Both local and international hikers explore Mudeungsan's beauty at any time of the year.

Mudeungsan (Mountain) is famous in many respects. But above all, it is renowned for its two peaks--Seoseokdae Peak and Ipseokdae Peak. These two are made up of columns (called collonades) looking like hexagonal million-year-old rocks.

Why go there? I have just mentioned one amazing sight above. Besides those towering ancients rocks, the whole of Mudeungsan National Park is beautiful all-year-round. You will see various versions of its beauty depending on the season (Winter, Spring, Summer, or Fall). 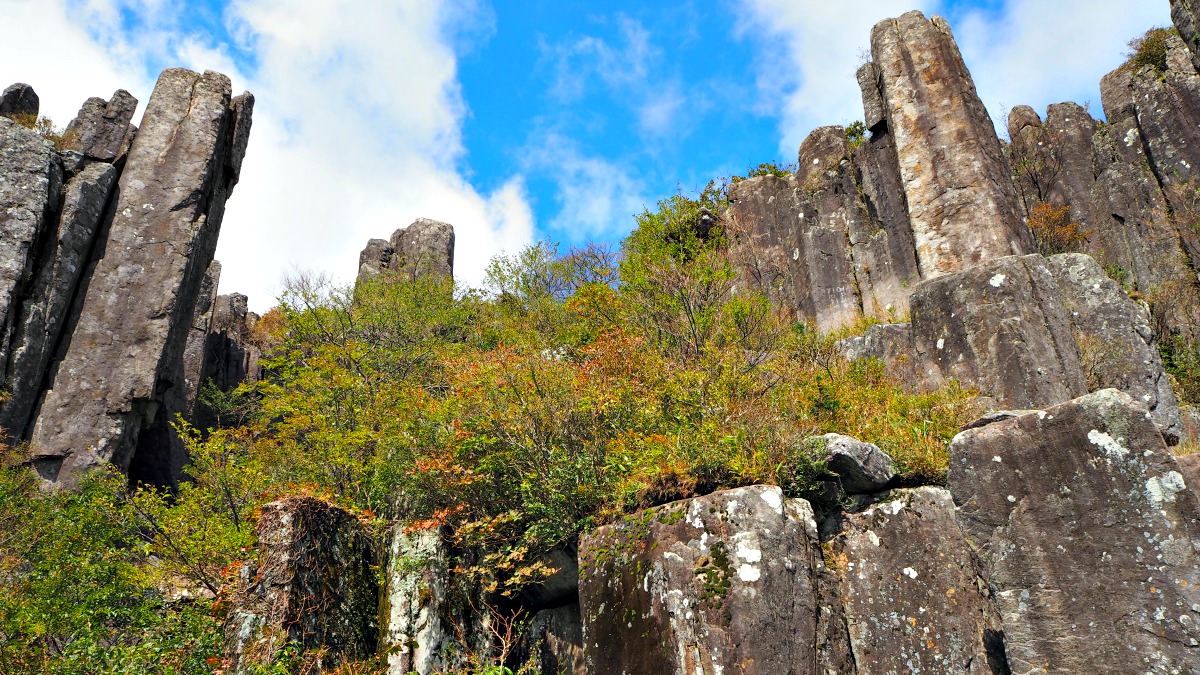 Yes, this article is my testimony that I've been there and has confirmed for what I thought and heard about its grandeur.

So, as a solo traveler, I planned all things, had my map in my hand, and headed towards Gwangju Bus Station from my hotel, which was about twenty minutes by subway (metro).

Overwhelmed with excitement and expectations for this big day, I took a local bus, which took about forty minutes to reach Jeungsimsa Temple stop. This is where you start your ascension to the peaks of Mudeungsan.

Now, before I proceed any further, please let me describe briefly about Mudeungsan National Park. Don't you worry!  Because my words cannot paint Mudeungsan's beauty. Therefore, my description below will not spoil your visit!

Cheonwangbong Peak was famous for worship among locals as they considered it a god's mountain. Other majestic features are the Seoseokdae and Ipseokdae (collonades) and Gyubong.

Around the foot of the mountain, where the main bus stop is located, you can explore the famous Buddhist temples such as Jeungsimsa, Yaksaam, and Wonhyosa temples.

Also, you can explore various recreating facilities below the mountain. At Gwangju National Museum, you can find ancient artifacts and treasures excavated nearby, which belong to the Seonsa, Baekje, and Silla periods. Paintings from the Joseon Period, among others, are also accessible to the public. 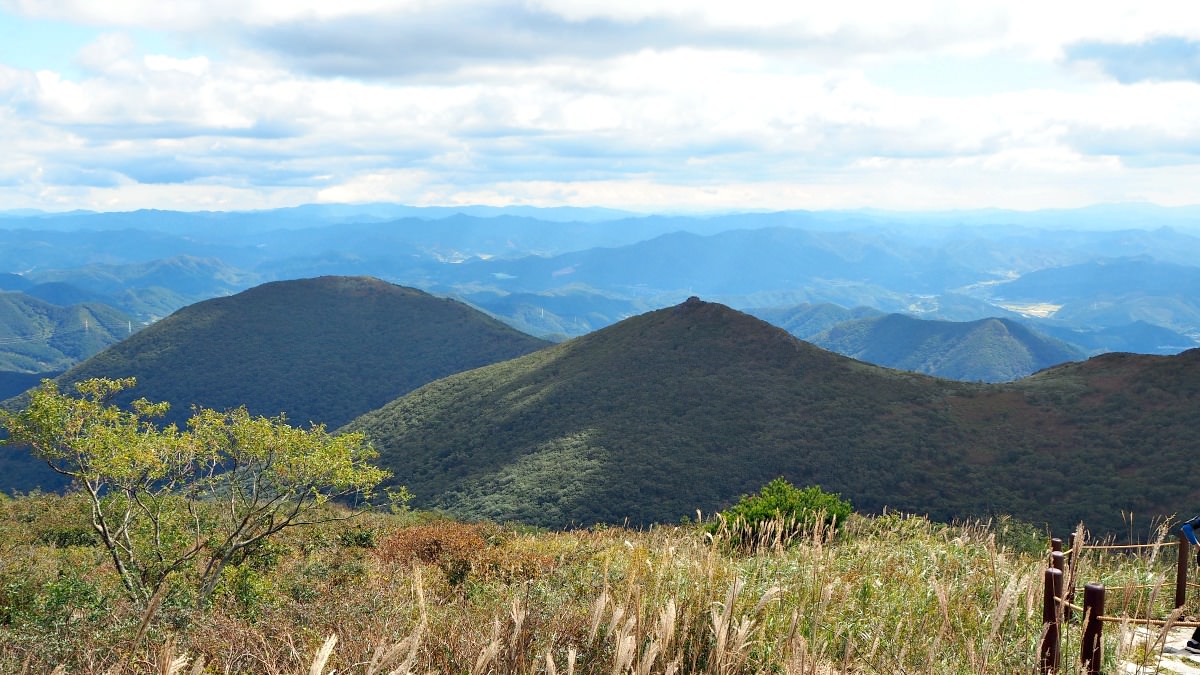 National Park Designation Year
Owing to the beauty of nature and the vibrant ecosystem of Mudeungsan, the mountain was designated as a provincial park in 1972 (May 22). Then it was elevated to its present status as the twenty-first national park in 2013 (March 4).

According to the Korea National Park Service, a national nature conservation governmental agency, Mudeungsan Mountain has an outstanding ecosystem and biodiversity.

The mountain park is full of vegetation where insects and animals are living freely. Some of these animals making their homes are endangered species, including otters and flying squirrels.

As I said, Mudeungsan Mountain is spectacular throughout the year. The technicolor leaves of the trees during autumn of Gyubongam is exciting. The silver grass during the late autumn of Baekma Ridge is dreamlike.

The following will be my more personal impressions of specifics features which I touched briefly above already! Fasten your seat belt!!

Let me start with...

They counted 40 of these polygonal columns, which aligns about 120 meters east and west.

Similar to Seoseokdae Colonnade, Ipseokdae columns were formed as pyroclastics during the late Cretaceous age more than 80 million years ago. 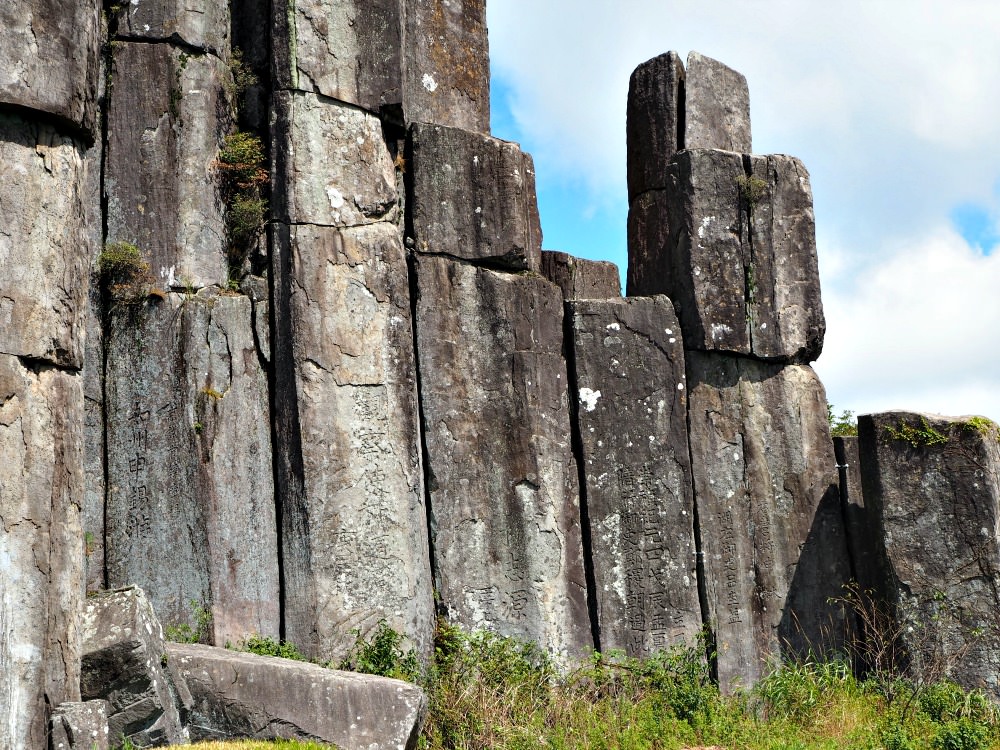 As you hike further and above the Ipseokdae, you will find a rock called Seungcheonam (Ascension Rock) that seems to rise to the sky. These columns are part of the Ipseokdae colonnade that is tilted with time.

As I moved closer and positioned in the observatory to examine the fantastic columns, I noticed that some of them are sculpted with Chinese characters.

I can only guess they were carved by Buddhist monks who used to meditate nearby the columns.

With crude tools, I can only imagine how skillful their sculptors were that produce such precisions and works of art!

I can also imagine that some of the monks and other mountain-god worshipers sat on top of some of those columns to pray or meditate!

Seungcheonam (Rock)
Along the way, going up and closer to the peak, I saw this somehow strange but attractive shape of rocks lying on the mountainside.

I was wondering what it was and what descriptions I could give to it. Surprisingly, I was not the only one intrigued by its shape.

Nearby, I saw the board with a description of this rock.  They call it "seungcheonam" rock. It literally means "ascension rock" in the English language.

Here is the story...

A monk, once upon a time, helped a goat to hide away from something that has been chasing it. In his sleep, the monk dreamt of a dragon that it needed to eat the animal so that it can ascend to heaven. If not, the dragon will eat him if the bell does not toll in time. Fortunately, as the story went, the bell rung, the dragon released the monk and ascended to heaven.

They said that's the shape of the rock. However, looking at it, it looks like a monkey to me! Different perspectives, eh! 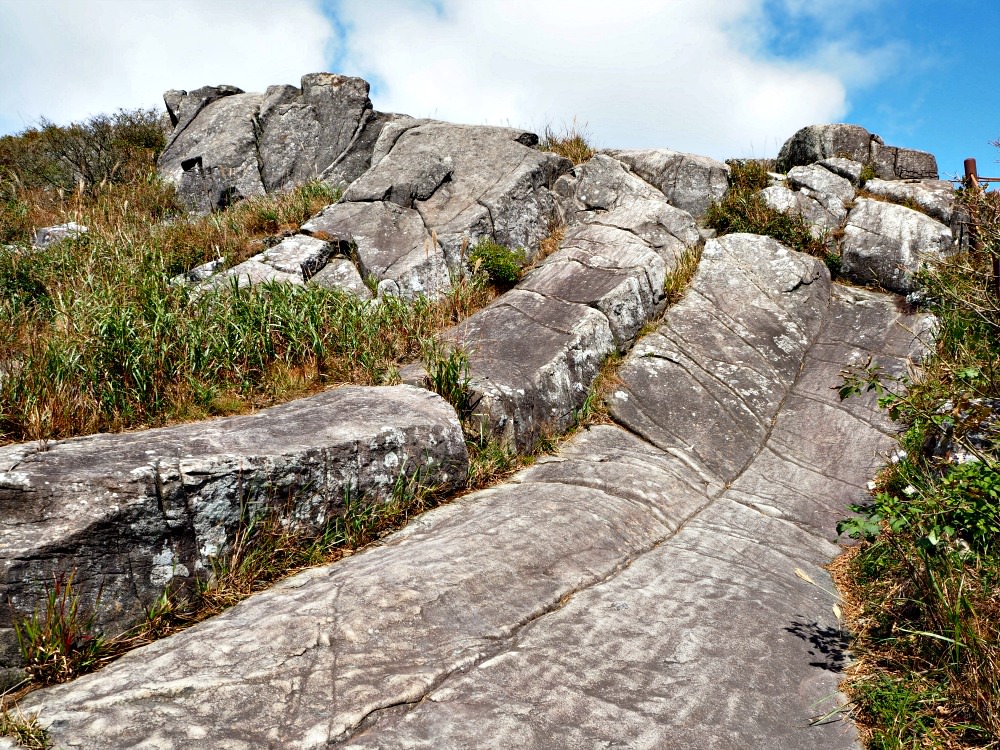 As I climb up higher, I can see the White Horse Ridge...

Baekma Ridge
They said that this ridge is about 2.5 kilometers long and between 800 and 900 meters above sea level. Baekma means 'white horse', which refers to the Saw Grass that grows along the ridge resembling the mane of a white horse.

You will begin to see the whitish grass (tall grass) at Jangbuljae Pass and reaching Nakta Peak (a camel's hump-like peak).

I only saw the Saw Grass as it was Fall when I explored it. But they also say that Baekma Ridge is also spectacular during Spring because of the Azaleas that color red the ridge.

Coming down from the peak (near the highest peak), I was excited to see the second most popular part of Mudeungsan National Park...

Seoseokdae, along with Ipseokdae Colonnade, comprises the Mudeungsan Colonnades and are two of the best attractions on the mountain.

The Seoseokdae columns (around 1-2 meters width) somehow resembles that of a 50-meter-long folding screen.

Geologically speaking, the columns that compose Seoseokdae Colonnade were formed from pyroclastic sediments.

They figured that the columns were formed about 80 million years ago in the late Cretaceous age.

Looking in the distance is amazing! But standing close to them is really mind-blowing! Yes, that's because they are too old, ancient, compared to myself. And here I am looking at them! 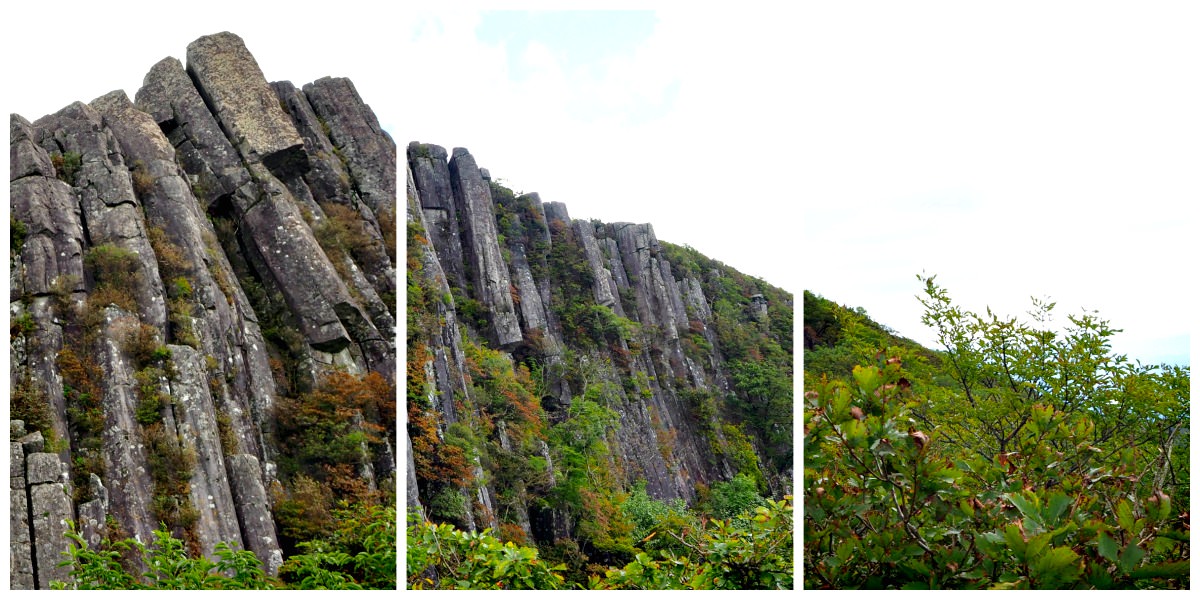 My collage of Seoseokdae Colonnade

Getting to Mudeungsan National Park

With all the available and comfortable mode of transportation in South Korea, one can easily and quickly get to the base of Mudeungsan Mountain.

Literally, when you are in Korea, you can get to anywhere you wanna go to within 4 to 5 hours at most! Say you want to go to Mudeungsan, the quickest is about three hours from Seoul. In fact, two hours only by train to Gwangju City, then around fifteen minutes to the Mudeungsan area by taxi!

But if you are not in a hurry (which is a better idea), you can take it a bit slow by taking a bus to Gwangju Bus Station, which is about three hours. Then take a local bus to the Mudeungsan Mountain area.

Alright, here's a bit more of a guide to your trip...

This terminal is not only new and modern but also vast. You can even spend a day here to enjoy and explore things. It has eateries, shops, restaurants, museums, offices, department stores, and even a movie house (theater).

U-Square Terminal is a central bus station in Gwangju City. From here, you can travel to most cities in the country. Transferring to reach your final destination is easy as the taxi terminal and local bus stops are accessible right in front of the terminal.

As you get off from a bus, head outside towards the main entrance of the terminal (signs and directions are visible inside the terminal) and find your bus number from a screen in the waiting area.

Look for Bus 09. It will take you to the entrance of Jeungsimsa Temple, where you will get off at its final stop. Then walk towards the direction that has an entrance area where you can get further instructions if you want to be sure.

By Train (KTX)
In Seoul, go to Yongsan Train Station (assuming you booked your ticket in advance). Then get off at Gwangju Seongjeong Station. It will take around one hour and thirty minutes in total.

Then you can take a taxi to Mudeungsan if you want to get there quicker.  It takes less than 30 minutes to get there.

By subway, it would take 44 minutes to get to Mudeungsan Station. But you need to take a taxi for the Jeungsimsa Temple area if you take a subway. I think it is more practice to take a taxi directly to Jeungsimsa to save time.

Thanks for reading and see more additions to this page.