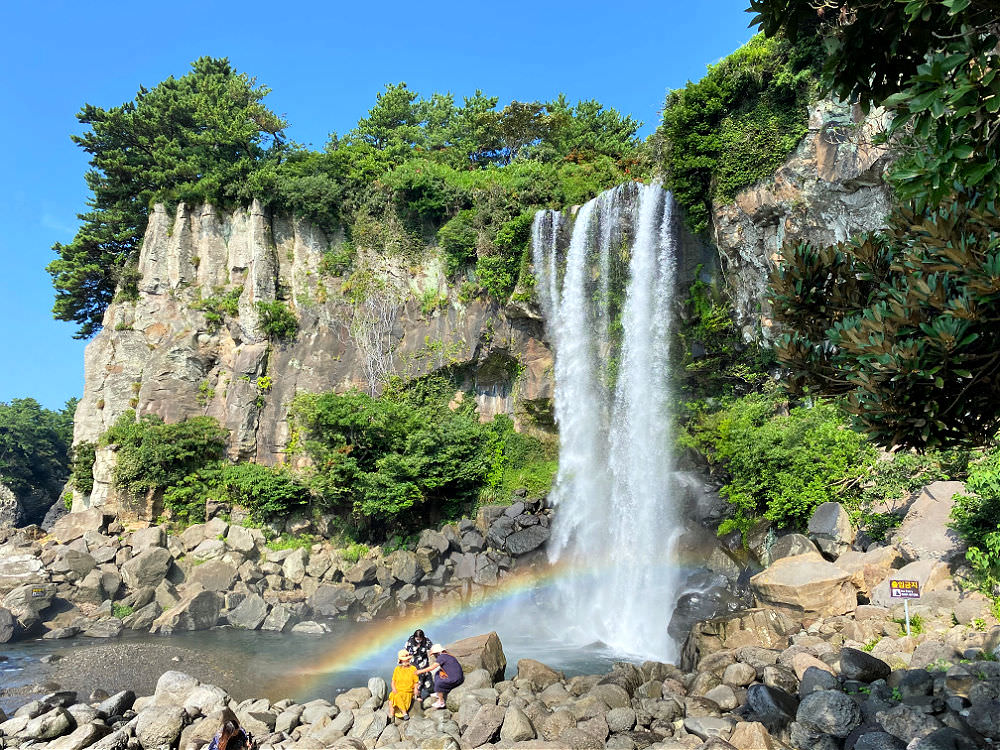 Jeongbang Waterfall is one of the three most famous falls on Jeju Island. It is located in Seogwipo City, and its crystal water goes directly to the sea.

The height of Jeongbang is 23 meters from top to its turquoise pool. The falling water is about 8 meters wide and could be wider when there's heavy rainfall.

I was very fortunate and so delighted as I visited Jeongbang Falls for the first time after the scattered rain showers during that week.

The rainy season was already over, but I reckoned that rain keeps falling due to climate change, which is one of its effects.

The water of Jeongbang Waterfall comes from Donghong-chun Stream above it. The geological structure of Jeju Island, which is formed thousands of years ago, has created this beautiful sight.

To describe a bit, the stone walls that created the waterfall are a result of the volcanic eruption, which formed the columnar joints (or jusangjeolli cliffs) visible at the sides of the waterfall. 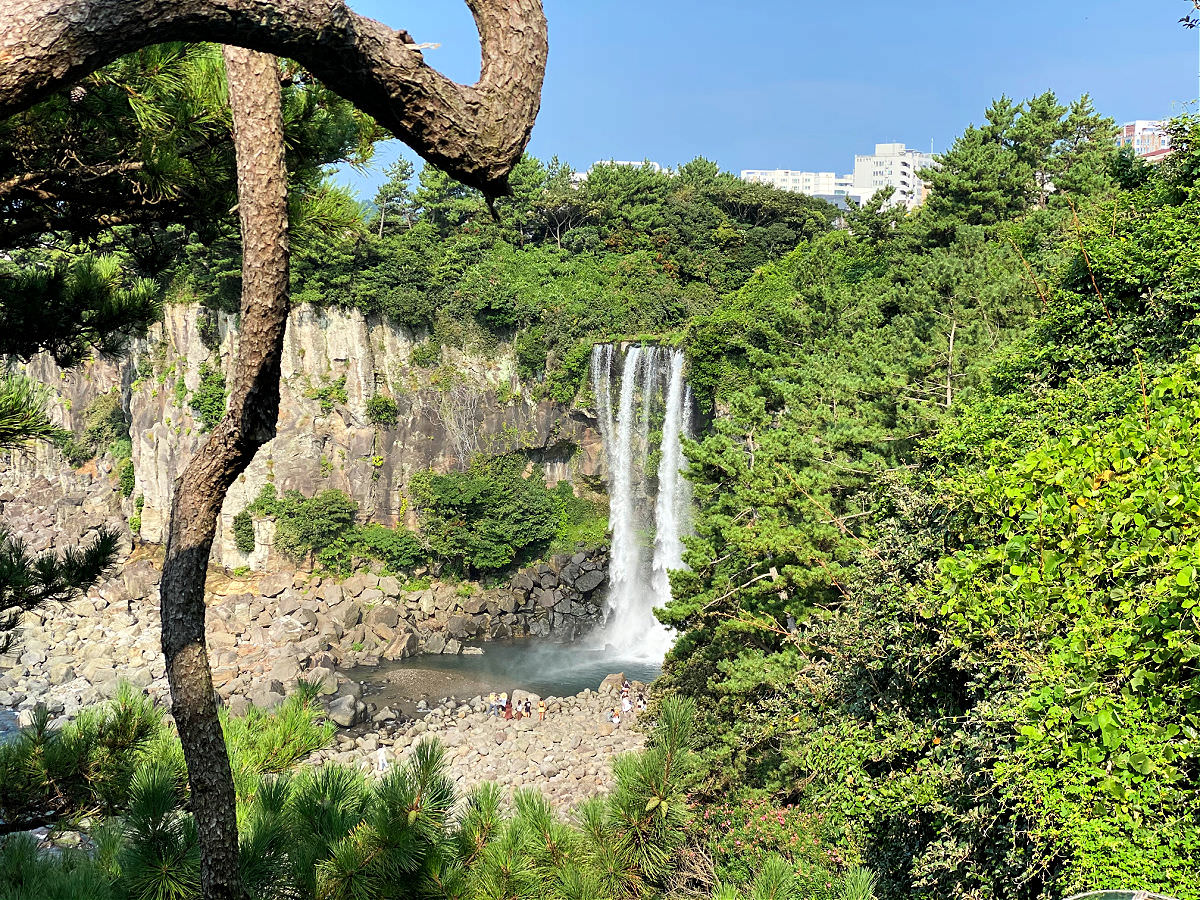 Legends are interesting stories made by locals in relation to the environment where they live.

It is the same with Jeongbang's legends. Stories told mention that people could be cured of any illnesses if they drink or bathe the water of Jeongbang Falls.

It was (or still is) believed that there was a dragon that lived in the pool, and its spirit is why its water cures. Besides that, the spirit of the dragon is believed to bring down rain during the dry season. 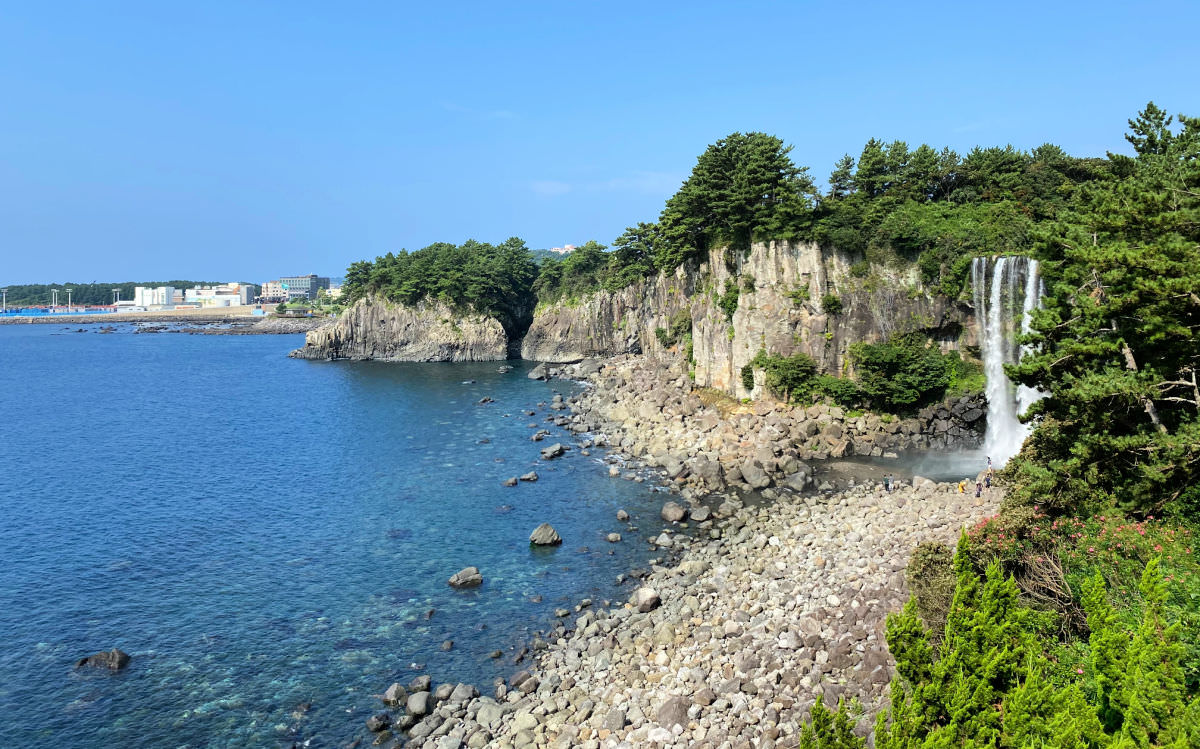 Inscriptions Legend
If you have traveled in many parts of Korea, you will have noticed (or already have visited similar sites) rock walls or rocks on or by the rivers carved or inscribed with Hanja (Chinese characters).

Most of such carvings or itchings are old and done by hermits and Buddhist monks. I found these carvings on the river walls and rocks nearby Buddhist temples.

For Jeongbang Waterfall, the legend says that Emperor Jin (China, 259 BC-210BC) ordered Seobul, one of the emperor's servants, to search for an elixir of life herbs from Mount Halla (or the Hallasan National Park).

The servant searched every corner of Jeju Island but found nothing. However, when Seobul discovered Jeongbang Falls, he rested there and left a carving on the rock wall, saying he has been there.

The characters say "seobul gwaji," which means Seobul was here during his quest for the elixir of youth. But it is said that the inscription is no longer visible as it is worn out due to time. 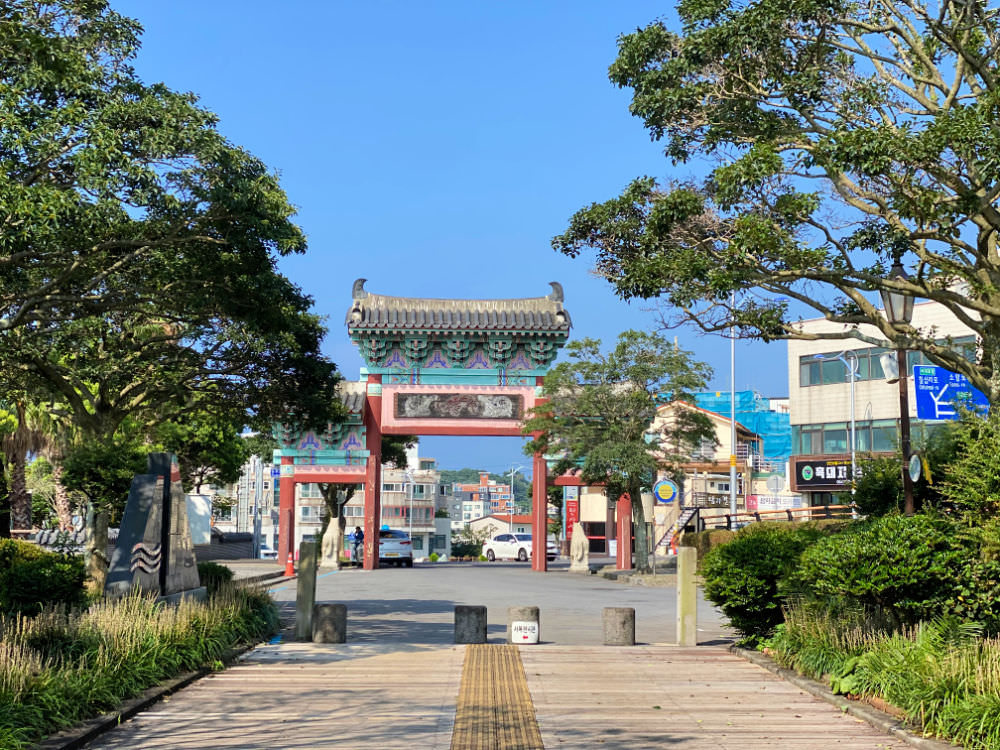 Entrance Gate towards the Waterfall area (towards my direction)

Of course, Jeongbang Waterfall is not the only site worth seeing and spending your precious travel time.

Some of the best ones include the other waterfalls...

Once you are in Seogwipo City, it is relatively easy to reach the falls area. You can take any public transportation, including a bus or a taxi.

Me? Since I was planning to visit more sites that day, I quickly went there taking a taxi.

But, here are some recommendations for the public transportations and possible options you can take when visiting the place.

Bus from Jeju Airport
Take a Limousine Bus from the airport that will bring you to the Paradise Hotel and Jeongbang Pokpo.

Bus from Jeju Intercity Bus Terminal
You can take any bus from this terminal to Seogwipo-si (City). It would be best if you got off at Jeju World Cup Stadium or Dongmun Rotary area.

Listen to every bus stop announcement and get ready before your bus stop by pushing the stop button.

You can also see the stadium (white and looks like an umbrella or something like that) far ahead, so it would give you a clue when to get off.

From the Stadium bus stop or Dongmun Rotary area, you can either walk for a few minutes or take a taxi (Kakao taxi or any taxi).

Now, just like other travelers and visitors to Jeongbang Waterfall, I, too, enjoyed my memorable visit.

I took lots of photos and one video with my phone attached to my gimbal tool.

Thanks for reading this, and I hope you will enjoy your travel too! Keep safe!