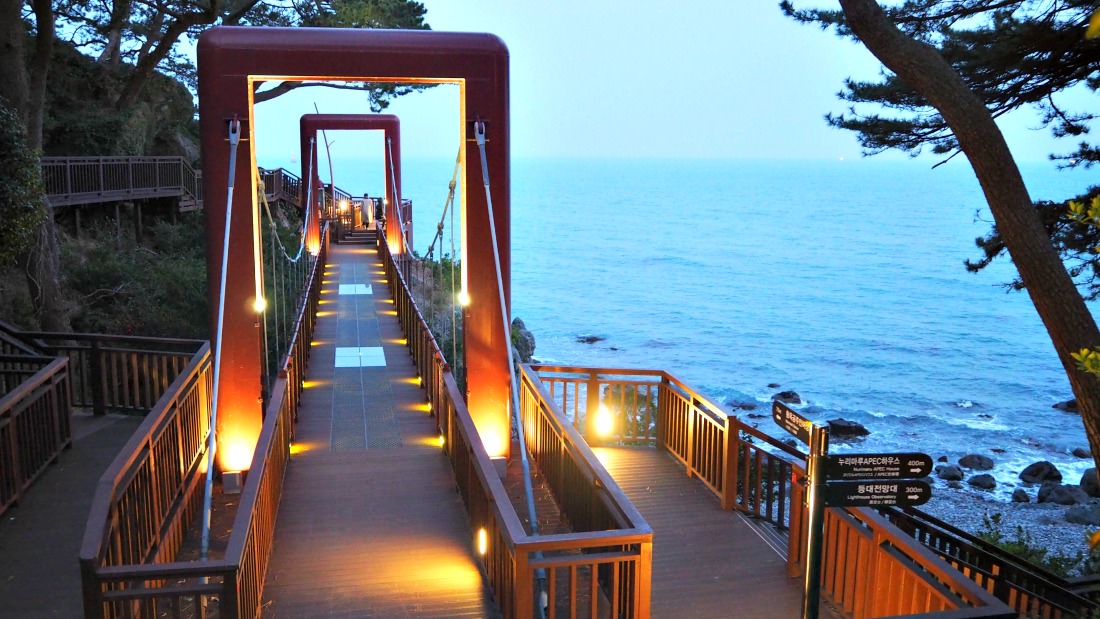 Dongbaek Island Park is an extension land and hilly side in the southern end of Haeundae Beach area. Dongbaek (a camellia flower) is the most dominant plant in this park, and this is how it is called.

Visitors and travelers in Haeundae Beach district wouldn’t miss exploring this Park since it is quite attractive due to reasons I’ll feature below. I heard about this attraction from a friend and realized that it is just close to my hotel.

The first photo I took was not a Camellia flower--it was a Cherry Blossom. Busan flowers bloom earlier because of its warmer (or it gets warmer earlier) temperature compared to Seoul area.

Right, here are the features...

As I mentioned above, Dongbaekseom or Dongbaek Island Park is decorated with verdant trees, especially pine trees, among many species. The camellias are also starting showing off their dark red flowers.

Within and around the verdant island, you can see hiking and walking trails. Dogs are allowed but should be with a leash.

There are steep trails available for those who are dedicated hikers.

However, there is also an easy trail that surrounds the island for those who prefer to stroll and chat while walking and enjoying the views.

At the peak of the island is a memorial area dedicated to Choi Chi-Won, a Korean and Confucian scholar and public official who turned hermit later in his life (see Choi Chi Won about this below). 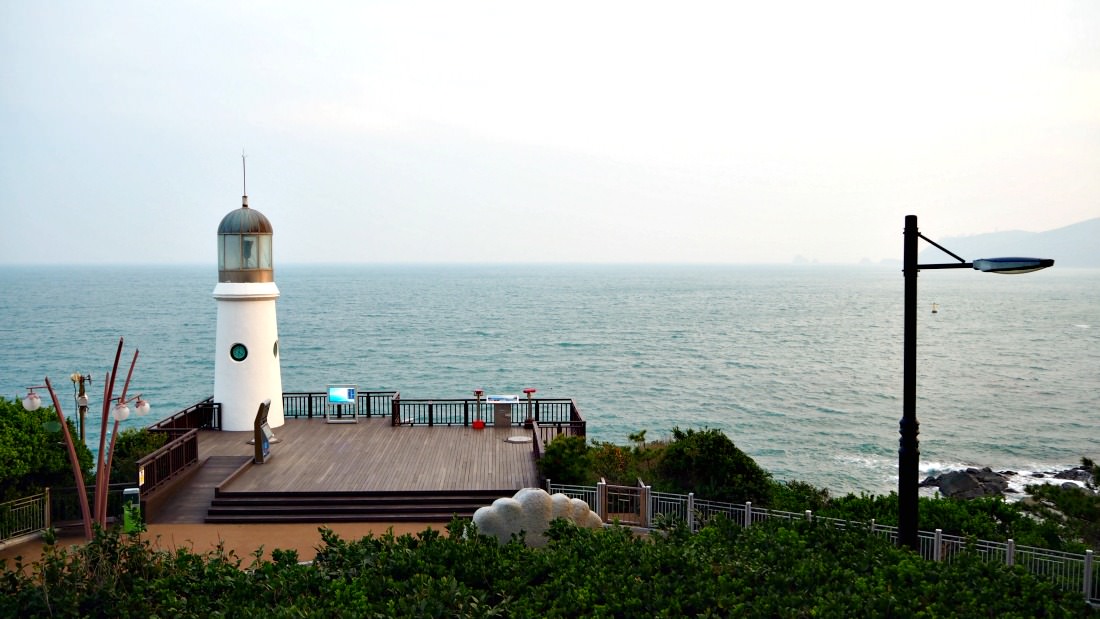 Nurimaru APEC House is one of the places you also should not miss to at least see the outside view. But if possible, come before it closes at around 5 PM, see the decorations, photos, and other historical descriptions of this structure.

As a quick overview, Nurimaru was built to accommodate the Asia-Pacific Economic Forum (APEC) Summit that was held in Korea in 2005.

The structure was recognized for its unique and modern architectural style. It interprets the traditional Korean ‘jeongja’ or the Korean wooden pavilions. 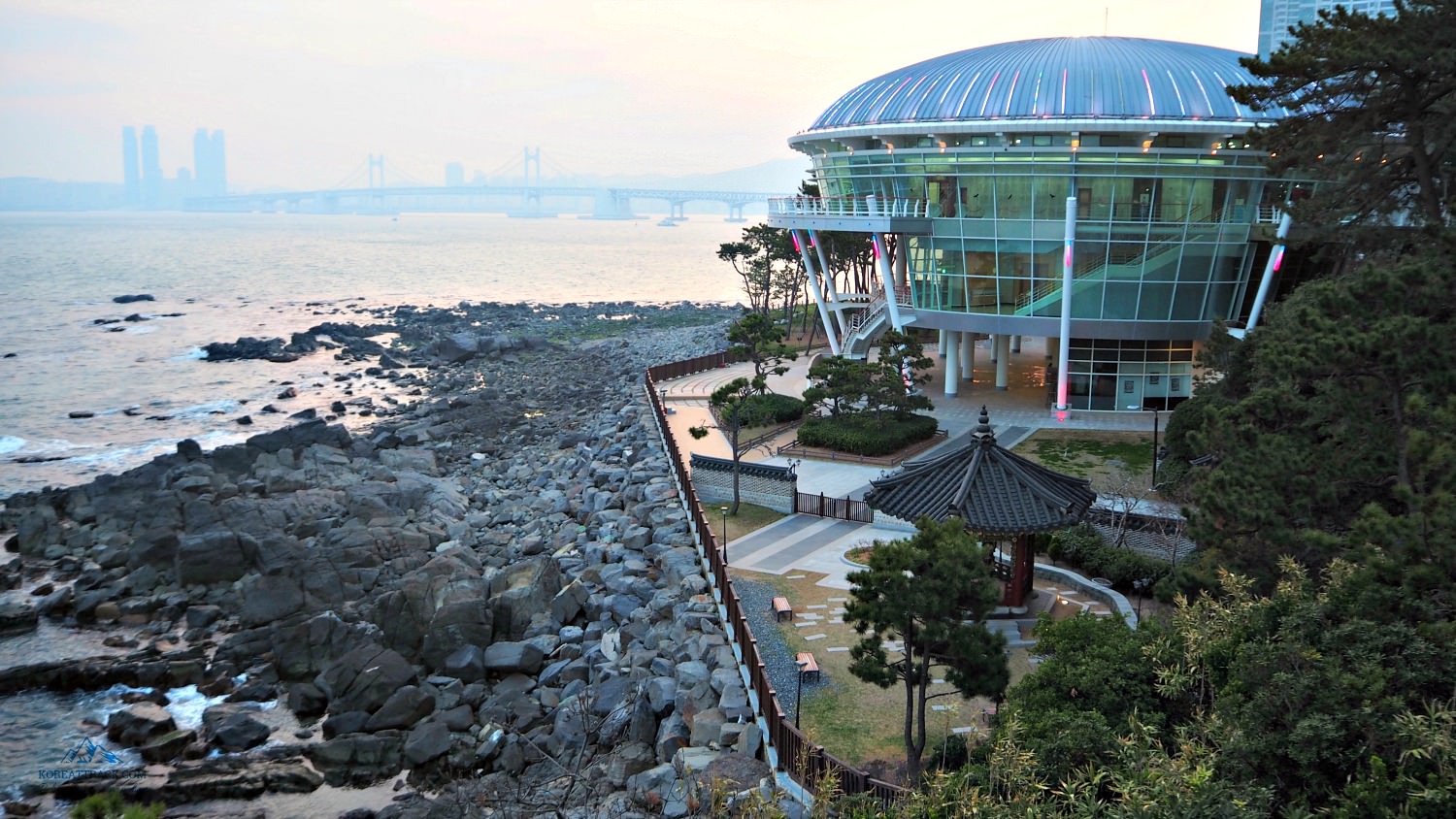 Amazing view of the sea, bridge, and Nurimaru APEC House on Dongbaek Island

Inside the House, you can see displays of photos and materials of the summit held that time. Among others, you can find beautiful miniatures of the House as souvenirs (for sale!).

Although beautiful during the broad daylight, Nurimaru APEC House is beautifully sparkling with rainbow lights in the evening. The background of lighted Gwangandaegyo Bridge in the distance adds more beautiful sight in the evening. 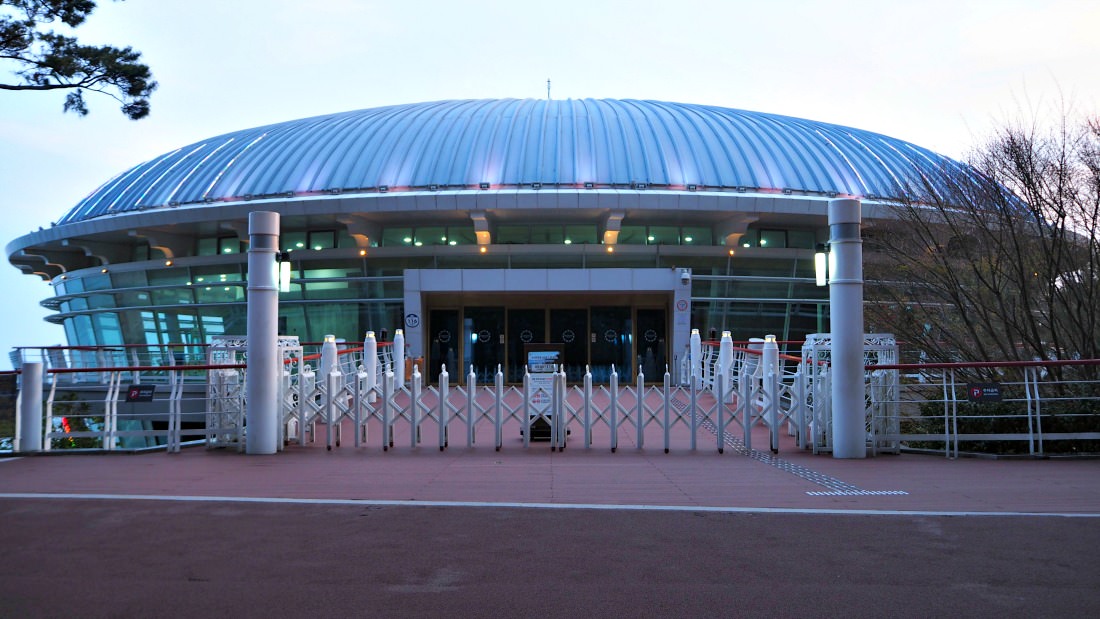 So, it would be best if you didn't miss seeing the lighthouse and maybe take photos and selfies. On this part of the island and towards The Westin Chosun Hotel, you will see rocks will various shapes.

You could imagine a mermaid resting on one of them. In fact, there is one mermaid statue on that side. I couldn’t see it as it was already dark! 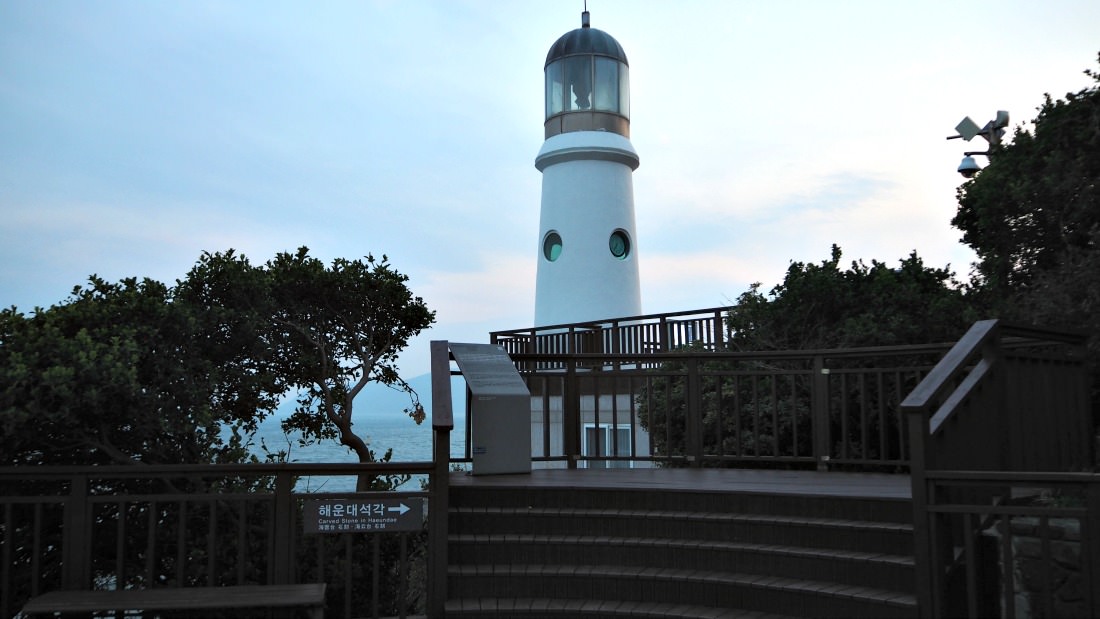 The Hanging Bridge, although just around 50 meters long, is a beautiful sight especially when lights are on in the evening. The bridge links one cliff side to the rock where one can see Haeundae Beach’s full view.

Yes, it swings a bit when walking through but not so scary for me, though! After crossing the bridge, you will see the entrance area just beside The Westin Chosun Busan Haeundae hotel and the beach area.

I don't know during daylight, but I know that the sight of the bridge looks more amazing and 'romantic' when the dim lights are on in the evening. My photo can attest to that ^^. 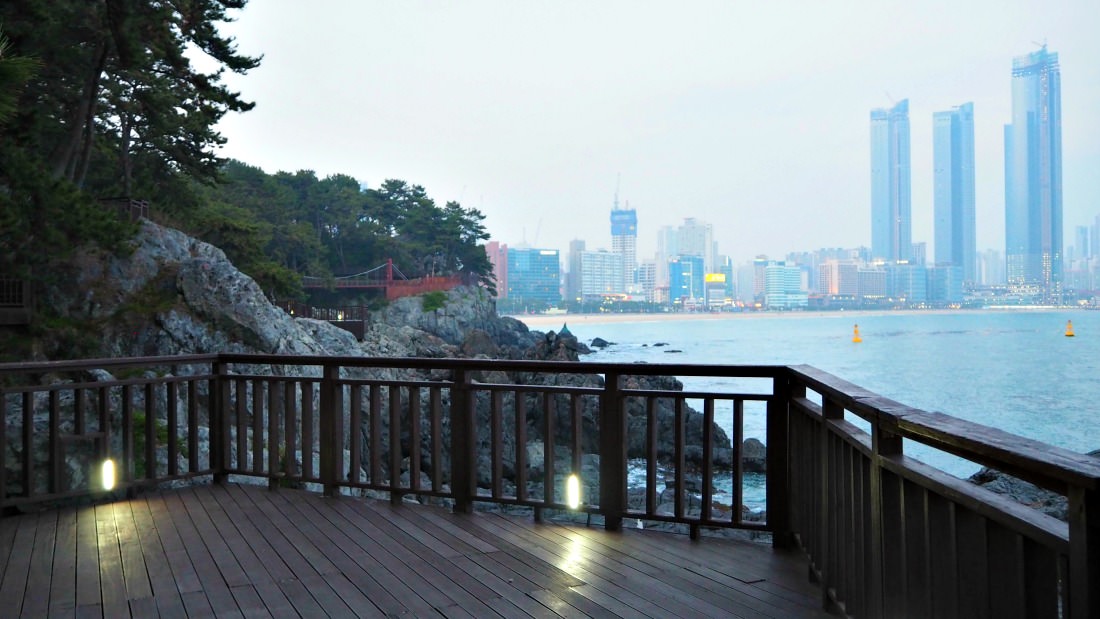 Dongbaek Island Park with a view of Haeundae Beach area

Choi Chi-Won was born in 857 during the Silla Dynasty in the first year of King Hurn in Gyeongju (see Gyeongju City). He went for study at the age of 12 to Tang (old China).

He passed the state examinations and became an official of the Tang government at the age of 18.

At 25, he issued a manifesto that has suppressed a rebellion in China.

At 28, he returned to Korea and became an official (of ‘Si-Dok’). His position made others jealous but decided to humble himself by moving to a lower position.

At 40, he gave up his position, started to ponder deeply about life and sought to develop his sense of morality deeply. 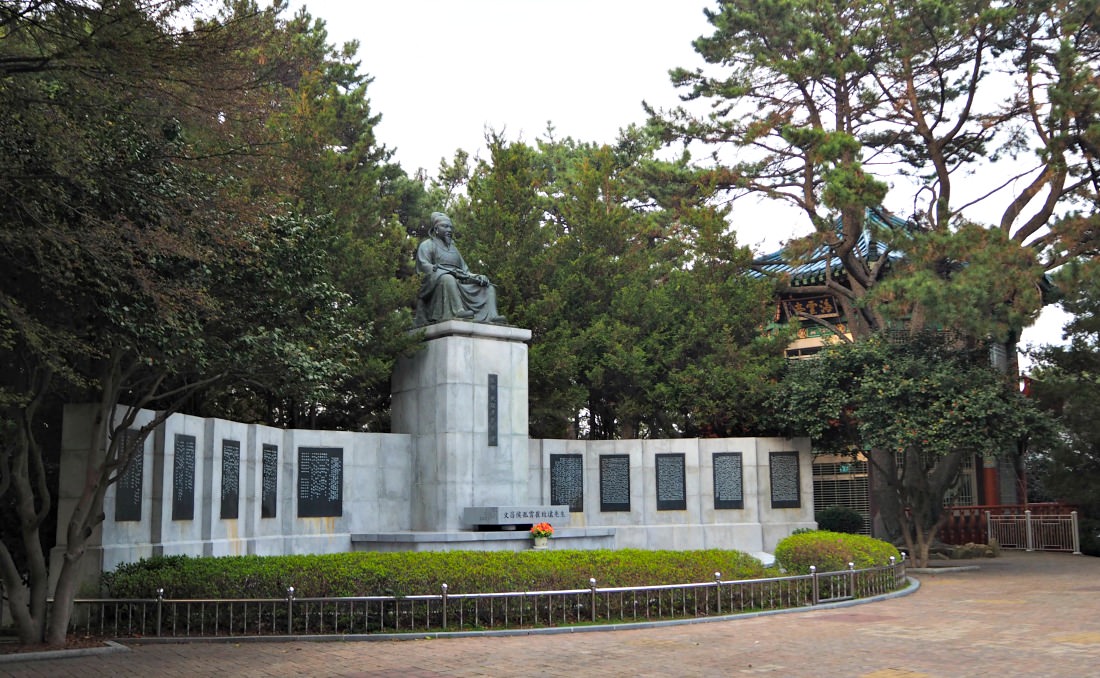 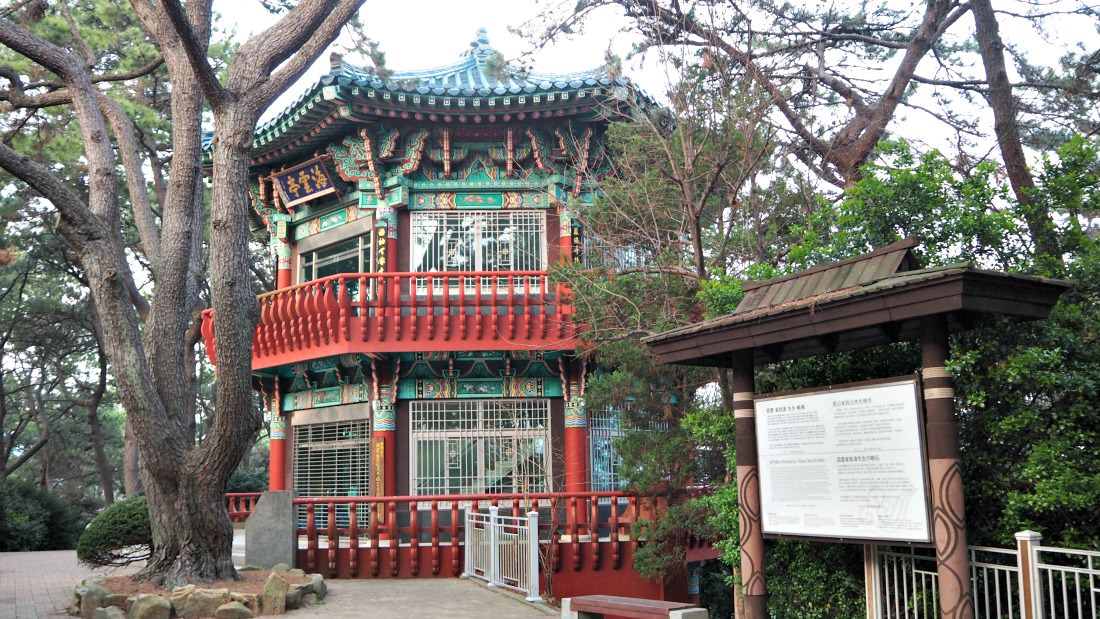 He became a hermit at Namsan Mountain in Gyeongju and lived his late years at Haeinsa Temple in Gayasan Mountain (now a national park).

Choi Chi-Won earned respect as the “Father of ‘He-Dong-Yu-Hak’ (Korean Confucianism), and the Goryeo Dynasty king rewarded him a posthumous title (“Mun-Chang-Hu”) recognizing his moral values and achievements in literature.

What is the significance of Choi Chi-Won about Haeundae Beach?

The term ‘Haeun’ was the pen name of Choi, which is inscribed on the rock south of Dongbaek Island.

(Source: A Profile of the Late Go-Woon Choi Chi-Won)

What else can you see there? Besides the sights and structures, you can also avail the public facilities, in case you need them.

Yes, you can also find public facilities that can cater to your immediate needs. They are useful and clean since the local government is maintaining them.

If you came to exercise your muscles (or biceps), aside from hiking, you could find some basic exercising tools at some points. 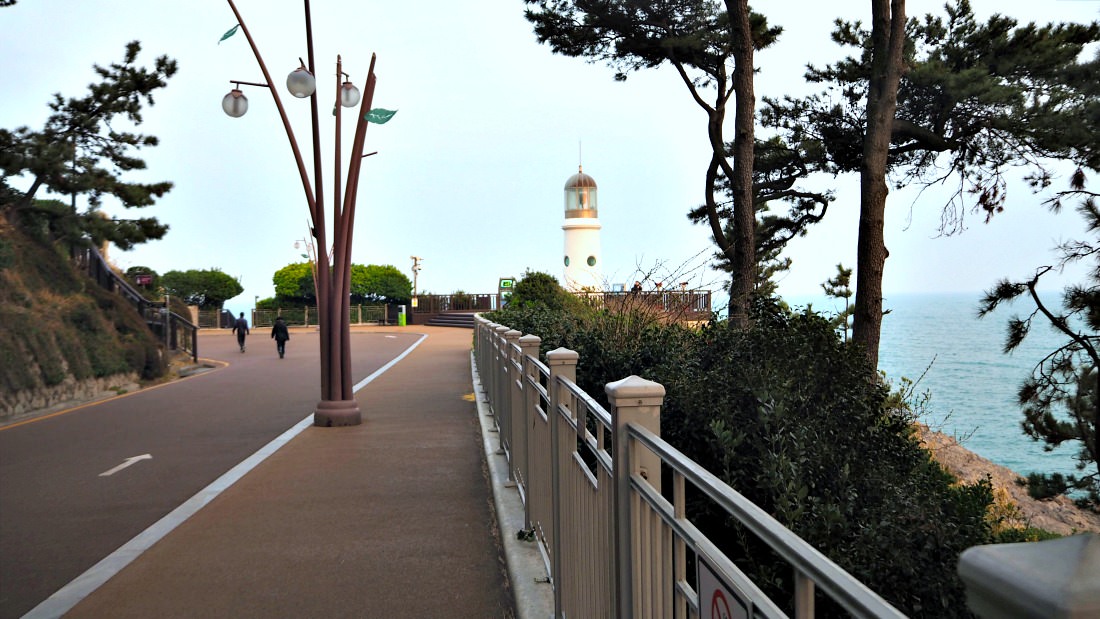 Getting to Dongbaek Island Park

Take Metro Line 2 then get off at Dongbaekseom Station and out from Exit 1. You need to walk for around 800 meters toward The Westin Chosun Busan hotel. You can start from either to your right or left to enter the park.

You can also get off at Haeundae Beach Station and head towards the beach area where you can see the hilly Park. From this point, you will see lots of other interesting sights including the famous Haeundae Beach. 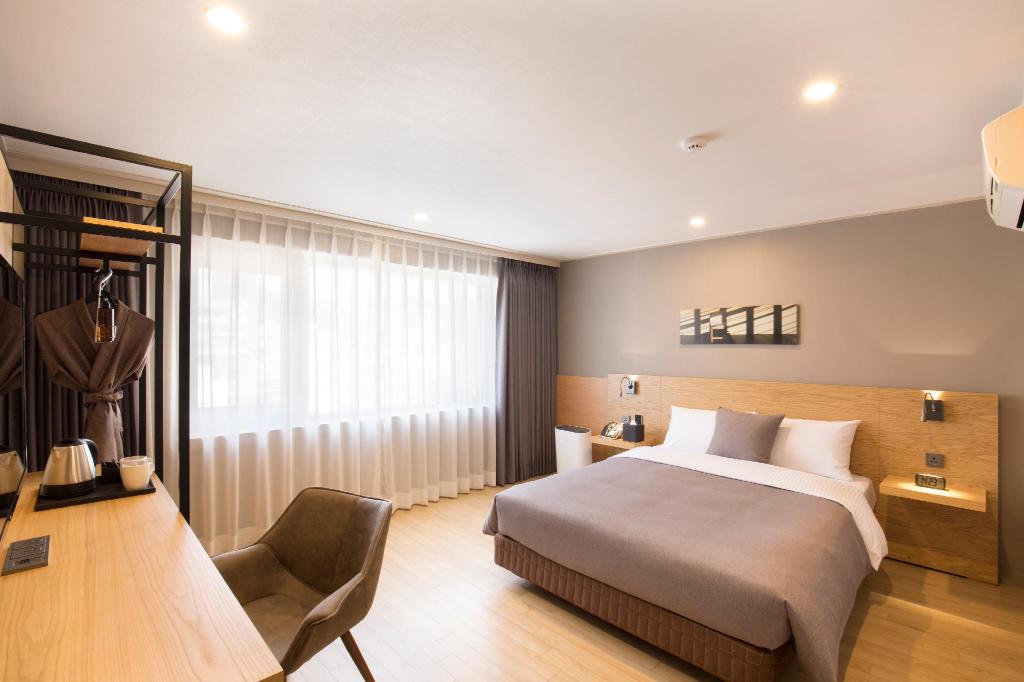 If you want to visit the famous Haeundae Beach and Dongbaek Island Park, maybe it would be best if you book your hotel nearby. The closest one is The Westin Chosun Busan hotel, a premium hotel by the beach.

Of course, you can also find other hotels with various ranges of rates and services. I recommend that you visit the area outside peak seasons, such as early spring, which I did. That’s because best hotels offer very affordable rates--even up to 70% discounts. You need to pay full during high seasons, but depending on the hotels’ management policy.

However, even during high seasons, you can still book at hotels in Haeundae with special discount offers and coupons. Below, see the hotels located near the beach area…

Yes, you can find and explore more exciting travel attractions and sites nearby Dongbaekseom Park. At least, it would take more or less than an hour either on foot or public transport.

Anyhow, here are some of the places I have visited and would highly recommend...

And see more attractions here. The linked article will be updated to add more on the list of attractions. Please, enjoy them!

I hope this article and sharing of my personal experience and impressions help your search. Please, drop me a line should you need any information about Dongbaek Island Park. I would be glad to answer as much as I can.