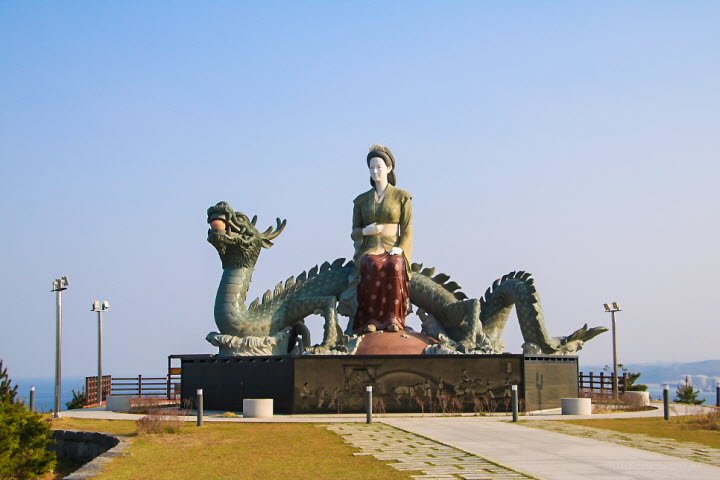 A photo of Lady Suro and the legendary dragon's sculpture (image:crickgokr)

Lady Suro Flower Tribute Park is a public space for guests who love exploring a park with an astonishing sea view. Located in Samcheok City, the park is a popular to-go place among travelers in the Gangwondo area.

The Lady Suro Flower Tribute Park (also called Surobuin Heonhwa Park or 수로부인헌화공원) began in 2006 by beautifying the area. In July 2015, an elevator was installed using the provincial budget investing in the over 26,000-square-meter park.

When the project was completed, it was for free but later on, in 2016, they collect an entrance fee to cover the costs for its construction.

Before it turned into the present Lady Suro Flower Tribute Park (or Surobuin Floral Tribute Park), it used to be called Imwon Namhwasan Sunrise Theme Park.

It was so-named because of the mesmerizing sunrise view it offers to visitors.

It was in March 2013 that the name was changed through public consultation. Its new name seems to attrack more visitors as it is based on the area's historical background.

The Story Behind the Park
Lady Suro Flower Tribute Park's name is based on the story with the same name found in the 'Samguk Yusa' songs called "Heonhwa" and "Haega."

During that period, the title "wife" (夫人) was given only to the queen, the king's mother, and the queen's mother.

Madame Suro was the mother of the wife of Samcheok, the concubine of King Gyeongdeok of Silla, who decided to use the name Samcheok. Lady Suro, known for her beauty, was following her husband Jeong-gong, who was appointed as governor of Gangneung during the reign of King Seong-deok of Silla.

The legend says that wherever Lady Suro went, people would come forward to offer flowers to express their respect and appreciation of her beauty.

A song, 'Wreath of Flower', contains the lyrics 'If you are not ashamed of me, I will pick flowers and offer them to you is one of that evidence expressing her beauty.

And here comes the legend...

While she was following her husband to the north, Lady Suro took a break in Imhaejeong, Jeungsan-dong, Samcheok-si, when a dragon fell in love with her and dragged her into the sea and disappeared.

Mysteriously, the older man who offered her flowers before appeared again. The legend says that the old man asked the people to pick flowers and sing the song 'Sunga' so that the dragon would appear.

You can see Lady Suro's statue sitting on a dragon that came out from the sea to make the story short.

Climbing up to the park using the 51-meter-high elevator from Imwonhang Port to Namhwasan Mountain, you will find a 500-meter-long deck walkway that leads to the park by crossing the Gureum Bridge.

If you follow the promenade, around 200 meters ahead, you will arrive at an observatory facing the sea. From there, you will see crowd statues singing "Seaga," a figure of Jeonggong, a humorous sculpture of 12 zodiac signs, and Heonhwajeong, an octagonal pavilion with two floors.

In front of Heonhwajeong Pavilion, you will find the world's first statue of a woman in a waterway made of natural five-colored marbles with a height of 10.6 meters, 15 meters wide, 13 meters in length, and weighs 500 tons.

The statue is 1.5 times King Sejong the Great's statue at Gwanghwamun Square in Seoul.

In the area closest to Ulleungdo and Dokdo, there is an observatory with a telescope called Dokdo Observatory.

Also, you will find a beacon (old fire signal) at the end of the trail. It is a two-story building with a total floor area of ​​193.8 square meters. The observation facility was completed and started its operation in July 2017.

Imwon Port Area
Imwon Port is a well-developed fishing port, and many sushi restaurants are established next to it.

The geological structure of the land extending farther to the sea provides the summit a fantastic view of the sea. This served as the best point for the villagers to watch the sunrise before it was converted into Lady Suro Flower Tribute Park.

To reach the park from Imwonhang Port, you can either use the mountain trail or take the 51-meter high elevator.

Because the trail is too steep, visitors prefer to take the elevator installed. Get off the elevator and follow the 500-meter-long promenade to reach the summit.

You can rest at the pavilion on the way up and enjoy the view of Imwonhang Port, the East Sea, and the coastline from the observatory.

About 300 to 400 people visit on weekdays and 1,000 people on weekends. Then, admission was free, but since April 2016, access requires an entrance fee.

Get ready to explore the surrounding attractions...

To the north, starting with Sinnam Port, you can visit the tourist fishing ports of Galnam Port, Jangho Port, and Chogok Port.

Samcheok City's representative marine tourism resources and facilities are located around these ports.

Near Sinnamhang (Port), you can explore the Haesindang Phallic Sculpture Park and Haesindang Park with Fishing Village Folklore Exhibition Hall.

By car, you can reach the park's parking lot through the concrete pavement road going towards the East Sea from 1371 Samcheok-ro, Wondeok-eup, Samcheok-si.

You can take a bus from Samcheok City that plies the area. Taxis are also available at downtown Samcheok.

Thanks for reading this page. Have safe travels. Have fun!